A retrospective analysis of recurrence risk factors for granulomatous lobular mastitis in 130 patients: more attention should be paied to prolactin level

Granulomatous lobular mastitis (GLM) is a benign chronic inflammatory breast disease that usually arises in premenopausal women. The clinical manifestation and radiographical features are variable and non-specific which make it easy to be confused with other breast inflammation or even multifocal breast cancer. It was first described by Kessler and Wolloch in 1972 (1) and further illustrated by Cohen in 1977 (2). GLM is related to lactation and could occur on patients during pregnancy and postpartum period, especially those within 3 years of delivery (3). Various hypothesized factors contributing to GLM occurrence have been reported, such as autoimmune mechanism disorders which is widely supported (4), infection (especially due to corynebacteria) (5,6) or even smoking (7), obesity (7) and ethnicity (8), while the precise etiology remains unknown.

GLM clinically presents with breast mass, pain, inflammatory changes of skin, nipple retraction, and persistent abscess, sinus and fistula, which is difficult to be distinguished from breast cancer (9,10). The ultrasonic and mammographic findings also lack of specificity (11). Histopathological examination is the main basis for the diagnosis of GLM, whose most prominent features are non-caseous granulomas centered on lobular units of the mammary gland, which are multifocal, of varying sizes and with or without microabscesses (12,13). Although medical therapies include antibiotics, steroids (14,15), methotrexate and surgical therapies include abscess drainage, wide local excision, even simple mastectomy have been applied, there is still no consensus on the optimal management of GLM.

Another dilemma of this disease manifested as prolonged wound healing and high rate of recurrence which was reported up to 50%. Continuous course of disease and repetitive breast operation have a great impact on the physical and mental health of women. Many studies merely focus on the description of clinical characteristics and management of GLM due to small sample size and incomplete data. For deeper understanding of GLM, our study retrospectively collected larger clinical data to discover the factors associated with recurrence and provide some new thoughts for the treatment of GLM. We present the following article in accordance with the STROBE reporting checklist (available at http://dx.doi.org/10.21037/apm-20-1972).

Data were collected retrospectively from the electronic medical records system in Tongji hospital from January 2010 to June 2019. The study was conducted in accordance with the Declaration of Helsinki (as revised in 2013). This study was approved by the ethics committee of Tongji Hospital (No. 20191105) and individual consent for this retrospective analysis was waived. Female patients who were firstly diagnosed as GLM through histopathological examination of core needle biopsy or postoperative specimens were included in this study. Patients underwent simple mastectomy were excluded as the recurrence of these patients was almost non-existent. Patients during pregnancy were also excluded, since hormone levels in these patients vary significantly from normal.

All patients underwent standard protocol which was formulated according to previous clinical experience in our hospital (Figure 1). Patients with breast abscess were treated with open drainage firstly. All patients were treated with antibiotics, breast massage, oral steroid for approximately a week to go through the acute inflammatory phase. Whether to undergo wide local excision were finally decided according to the recovery condition after the above treatments. Patients with hyperprolactinemia received oral bromocriptine for 3 months after surgery as medical management of hyperprolactinemia has been proven to be correlated with resolution of IGM (16,17). Fasting prolactin (PRL) level was examined after patients sitting quietly for at least half an hour. PRL level was detected for all patients before treatment and every month after surgery for at least half a year. 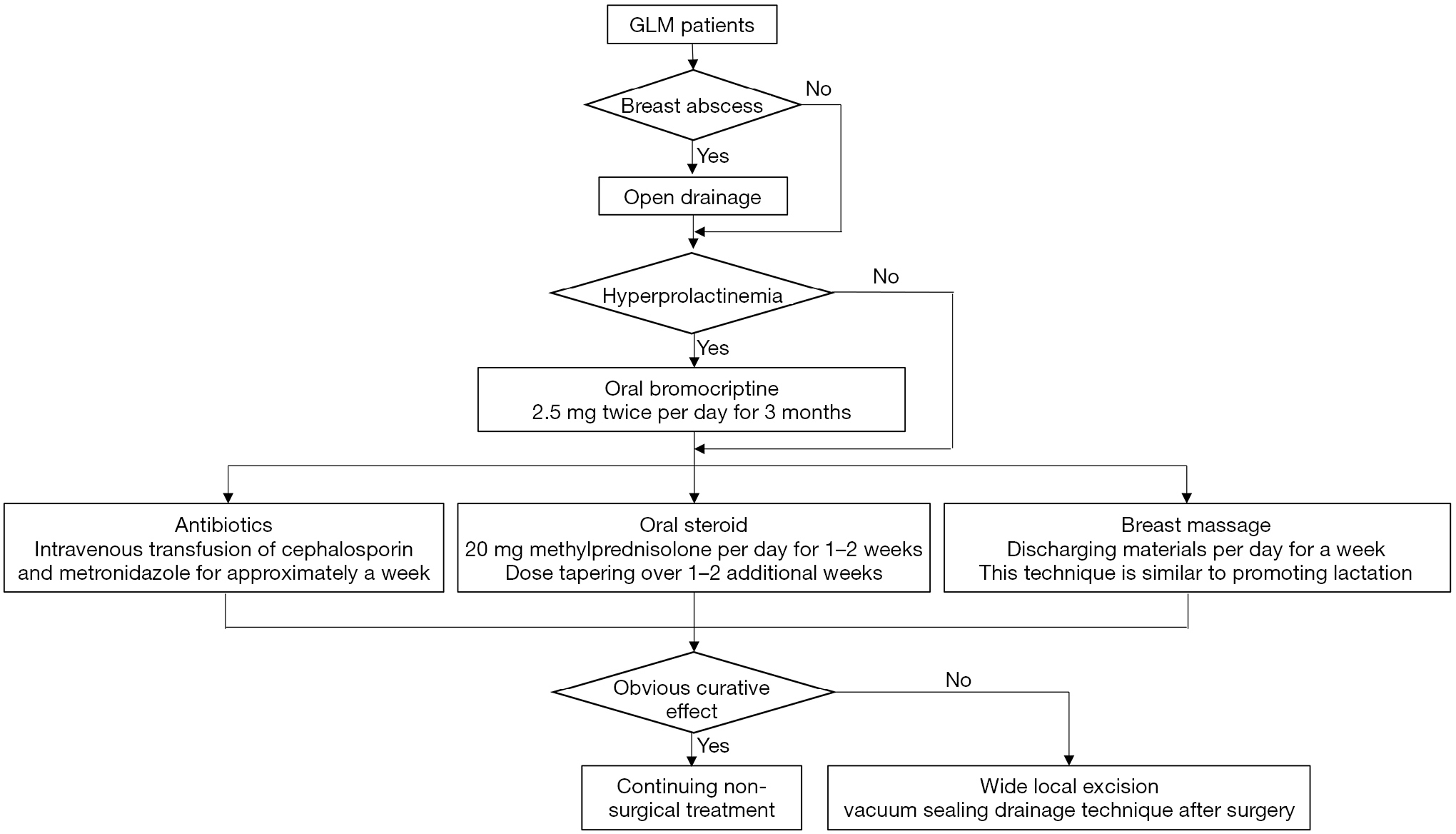 Descriptive statistics were used for demographic data, disease-related variables, and treatment modalities. The Kruskal-Wallis test was used for continuous variables, which were presented as mean ± standard deviation or mean (range) and Pearson χ2 test was used for categorical variables, which were presented as frequency (%). Logistic regression models were built for analysis of risk factors for the recurrence of GLM. Statistical analyses were performed using the statistical software package SPSS for Windows, version 19.0 (SPSS Inc., Chicago, IL). P<0.05 was considered statistically significant. 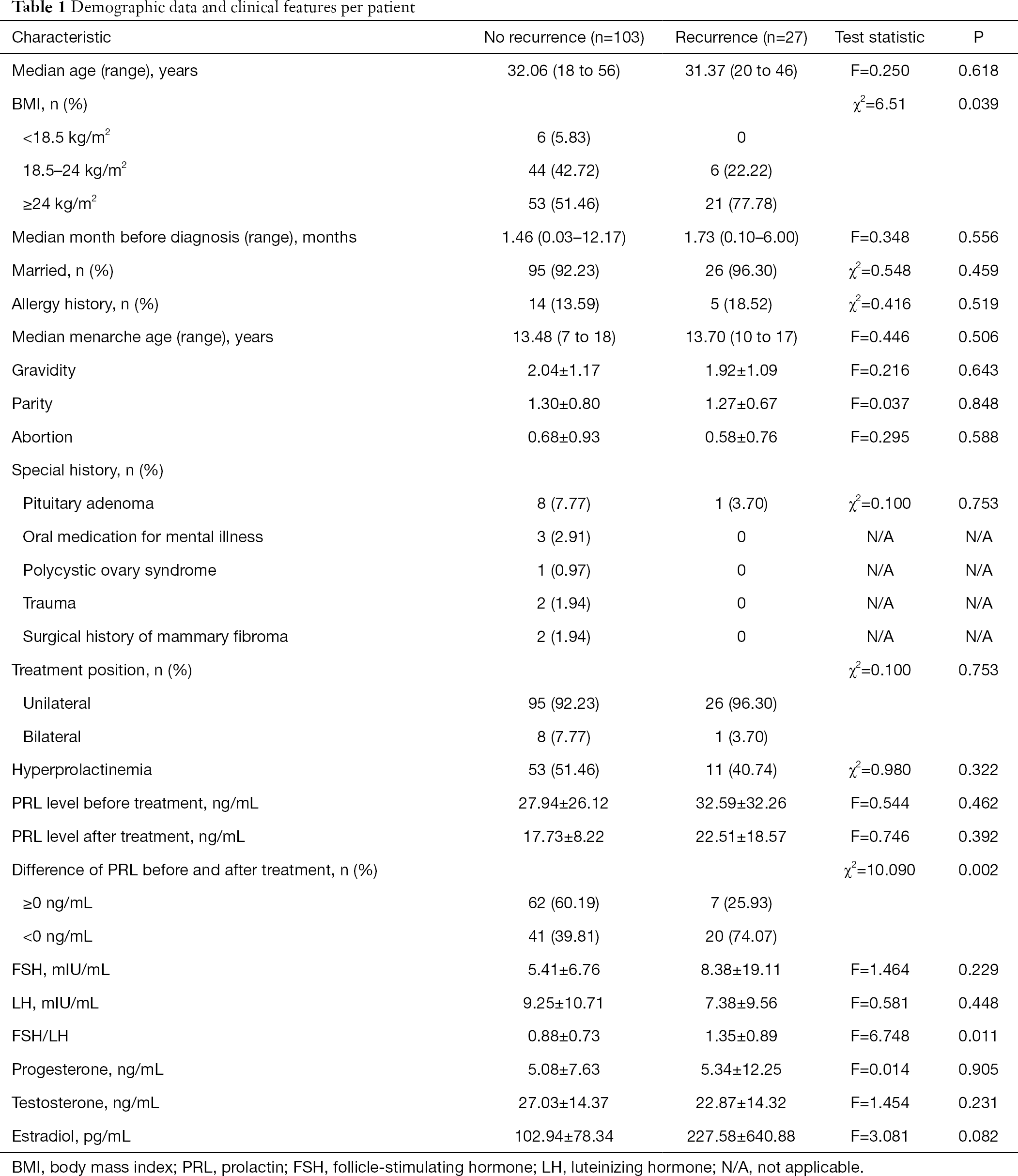 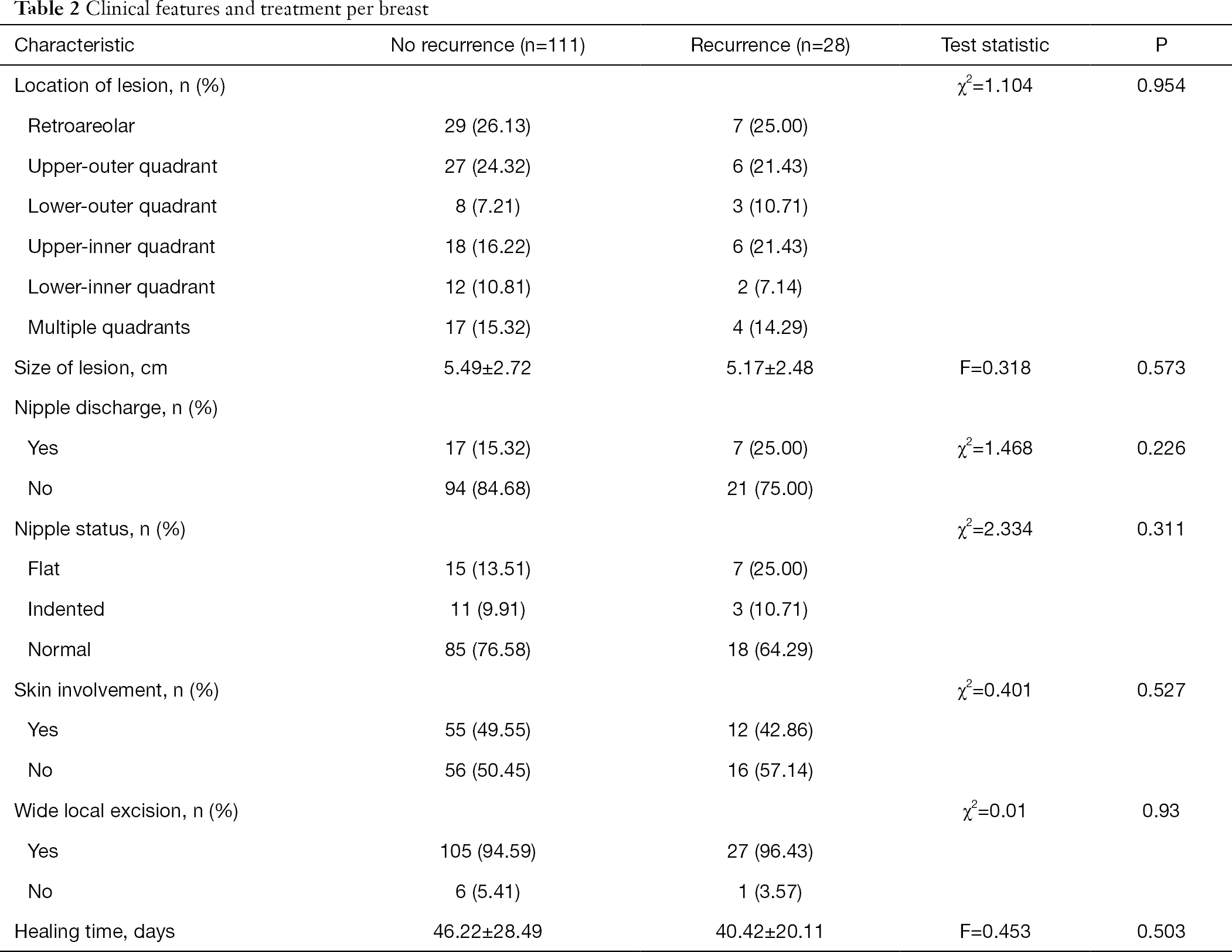 In multivariate analysis, the positive factors from univariate analysis were included in this model (Table 3). As a result, only the difference of PRL level before and after treatment was the independent risk factor of recurrence [odds ratio (OR) 21.405, 95% confidence interval (CI): 1.702–269.233, P=0.018], which meant that the higher PRL after treatment than before treatment was, the more likely it would develop recurrence.

GLM is a benign chronic inflammatory breast disease, while due to unknown etiology and non-specific clinical characteristics, there is no optimal treatment up to now. There have been multiple managements of GLM, such as antibiotics, steroid therapy, and surgical treatment. Combined use of the above therapies is currently a common method for the treatment of GLM, while it is still accompanied by a higher recurrence rate. Many studies focus on describing the clinical characteristics of GLM and discovering its pathogenic factors. In this study, we focused on analyzing risk factors associated with recurrence in 130 patients and collected more comprehensive information about hormone levels.

There is still no standard treatment for GLM. Wide local excision is the most widely accepted treatment for GLM, since the recurrence rate of local excision is high (18). And the combined use of steroid therapy could shrink breast mass which could narrow the scope of operation and avoid obvious deformity (19). Besides, according to our experience, breast massage is an effective method for the recovery of GLM, through which we could discharge a lot of yellow lipoidic fluid from breast. Moreover, we attach importance to the effect of PRL on GLM, and bromocriptine is applied in the treatment schedule.

Our results showed that BMI, FSH/LH, and the difference of PRL level before and after treatment are risk factors for recurrence in univariate analysis. Bharat et al. found that obesity was associated with non-lactating abscesses (8). Some other studies have shown that obesity is a low-grade chronic inflammation and the changes of its related factors could directly affect the expression of local estrogen receptors and the occurrence of inflammation (20,21). There was no association between simple FSH or LH level and the recurrence of GLM, but interestingly, we found that patients with a higher FSH/LH ratio were more likely to relapse. This might be because the ratio of FSH and LH level is related to ovarian function, whose imbalance can lead to sex hormone secretion disorders and affect one of its target organs, namely mammary gland.

PRL is a polypeptide hormone that targets the breast tissue and is responsible for the maturation and differentiation of the mammary gland. Some studies have shown that hyperprolactinemia might be related to the development of GLM (22,23). In our study, we found that a lot of GLM patients had high PRL levels, whose mean values in both groups were above the normal range. However, few studies have examined the relationship between PRL and GLM recurrence. We found that the difference of PRL level before and after treatment was the independent risk factor of recurrence according to multivariate analysis. When the PRL is higher after 3 months of treatment than before treatment, it is more likely to develop recurrence. Therefore, our study suggests that hyperprolactinemia is closely related to the occurrence and development of GLM. The inducing mechanism of hyperprolactinemia might be related to the obstruction of the mammary duct, which is associated with flat or indented nipple. In addition, 9 patients in this study had a history of pituitary adenoma, 3 of oral medication for mental illness and 1 of polycystic ovary syndrome, which could also contribute to hyperprolactinemia (24). We further speculate that hyperprolactinemia leads to the accumulation of lipoidic fluid and eventually the damage of mammary duct, resulting in antigen exposure and autoimmune reaction, which is similar to the mechanism of GLM caused by trauma or surgical history of mammary fibroma.

The limitation of our study is that many studies have confirmed that some GLM cases are actually associated with Corynebacterium infection, but in our hospital Corynebacterium species were not specially cultured or examined, which might result in some cases being insensitive to the empirical antibiotic treatment.

This is the first study to link FSH/LH and PRL level to GLM recurrence and further validation needs to be carried out to confirm the above correlation. However, as GLM is a rare disease, prospective controlled validation is not easy to be carried out and multicenter studies might be helpful to verify the conclusions. In addition, the above mechanisms are only our conjecture based on clinical evidence, so experimental research is worth further study.

Our study demonstrated that obesity or overweight and FSH/LH had association with GLM recurrence, and the difference of PRL level before and after treatment is the independent risk factor of recurrence. Patients presenting with higher PRL after treatment than before treatment have a higher risk of recurrence and should be monitored closely. Clinical examination of hormone levels especially the PRL level should not be ignored during and even after the treatment of GLM. Multicenter prospective studies with larger sample would help us understand and treat this disease better.

Reporting Checklist: The authors have completed the STROBE reporting checklist. Available at http://dx.doi.org/10.21037/apm-20-1972

Conflicts of Interest: All authors have completed the ICMJE uniform disclosure form (available at http://dx.doi.org/10.21037/apm-20-1972). The authors have no conflicts of interest to declare.

Ethical Statement: The authors are accountable for all aspects of the work in ensuring that questions related to the accuracy or integrity of any part of the work are appropriately investigated and resolved. The study was conducted in accordance with the Declaration of Helsinki (as revised in 2013). This study was approved by the ethics committee of Tongji Hospital (No. 20191105) and individual consent for this retrospective analysis was waived.