Adenomyosis is a benign uterine disease with focal or diffuse enlargement of the uterus due to intrusion of the endometrium into the myometrium (1). The standard treatment of adenomyosis is hysterectomy, which is invasive and causes various complications (2). As the comprehensive complements to hysterectomy, hormonal treatments and endometrial ablation can temporarily induce regression of adenomyosis and improve the symptoms with an inadequate response (3). Currently, uterine artery embolization (UAE) has been accepted as an effective method for the treatment of adenomyosis since it is first introduced in 1995 (4). It has the advantages of minimally invasion, lower cost, preservation of the uterus and fewer complications.

The purpose of this retrospective study was to explore the prognostic role of ovarian endometriosis in symptomatic adenomyosis patients underwent UAE. We hypothesized that patients without OE showed a lower incidence of dysmenorrhea and may have an advantage in the improvement of dysmenorrhea compared with those with OE when they underwent UAE. Our study would provide a basis for UAE to treat adenomyosis with OE. We present the following article in accordance with the STROBE reporting checklist (available at http://dx.doi.org/10.21037/apm-20-1381).

From May 2009 to July 2016, 76 patients who underwent UAE in The First Affiliated Hospital of Sun Yat-sen University for the treatment of symptomatic adenomyosis were included in the study. This retrospective study was approved by the Institutional Review Board of The First Affiliated Hospital of Sun Yat-sen University with a waiver for informed consent [(2018)070]. The study was conducted in accordance with the Declaration of Helsinki (as revised in 2013). All patients were diagnosed as adenomyosis according to their clinical histories, symptoms, and magnetic resonance imaging (MRI) findings. The clinical histories and symptoms covered dysmenorrhea, menorrhagia, pelvic pain, and dyspareunia, among which dysmenorrhea and menorrhagia were the main complaints in this study. The diagnostic criteria for MRI of adenomyosis were as follows: (I) maximum thickness of the junctional zone >12 mm and (II) high-intensity signal myometrium spot (11). All 76 patients exhibited an insufficient clinical response to pharmacotherapy (progestogens, hemostatic agents, or gonadotrophin-releasing hormone agonists) and expressed a strong desire to preserve the uterus without fertility requirements. Patients with fibroids and prior surgeries were also excluded in this study.

Patients in the OE group also met the following criteria. (I) Patients were diagnosed as OE by MRI. A definitive diagnosis was made when the lesion consisted of multiple, entirely hyperintense cysts on T1WI regardless of the signal intensity on T2WI or a cyst that was entirely hyperintense on T1WI and exhibited a hypointense signal (usually mixed with hyperintense areas) on T2WI (12). (II) The diameter of all ovarian endometriosis is ≤4 cm, which is evidence for a lack of surgical indication (13). (III) Endometriosis is confined to the ovary, and patients with endometriosis in other locations (e.g., the parametria, Douglas pouch, anterior rectal wall, posterior bladder detrusor, ureters, and sigmoid colon, etc.) were excluded.

Clinical information of the patients was collected retrospectively, including age, clinical symptoms, and whether symptomatic adenomyosis was accompanied by OE. The intensity of dysmenorrhea was classified according to the following VAS scores (14): mild, 0–3; moderate, 4–7; severe, 8–10. The degree of menorrhagia was classified according to the number of sanitary pads in one menstrual cycle: normal (0–19 pads needed in one menstrual cycle); larger (20–30 pads needed); vast (>30 pads needed). Follow-up interviews about symptom relief were conducted 12 months after UAE.

The preparation and embolization protocols for the patients were similar to those previously discussed in the literature (15). A 5-F Yashiro catheter (Cook, Bloomington, IN, USA) was advanced distally into the uterine artery through a femoral approach. The primary embolic agent was trisacryl gelatin microspheres (Biosphere Medical, Rockland, MA, USA), with a range of diameters that were categorized into the following groups: 500–700 µm diameter and 700–900 µm diameter. Embolization was performed until there was complete cessation of blood flow in the ascending uterine artery. All procedures in this research were conducted by the same experienced doctor with experience in UAE performance of over 10 years.

SPSS version 24.0 was used for the statistical analyses. The Shapiro-Wilk test was performed on quantitative variables for normality test. As age was subjected to normal distribution (P>0.10), the independent sample t-test was used to compare the two groups. The rank sum test was used on categorical variables such as the intensity of dysmenorrhea and menorrhagia before UAE. The baseline indexes of two subgroups reached equilibrium (P>0.05), then Chi-square test was used to compare the efficacy of two subgroups. If the theoretical frequency of any cells is smaller than 5 (the total number of cases is bigger than 40), McNemar’s chi-square test will be adopted. P<0.05 was considered significantly different.

Our study suggests that UAE is an effective midterm treatment for symptomatic adenomyosis. In this study, the two major symptoms, dysmenorrhea, and menorrhagia, were significantly relieved in patients with adenomyosis who underwent UAE. The overall improvement rates of dysmenorrhea and menorrhagia in 12-month were 77.0% and 80.3%, respectively, which was consistent with the previous outcomes (16-18). Present data supported that UAE was an efficient treatment for adenomyosis, particularly for those patients who were resistant to conventional therapy and wished to preserve the uterus.

Interestingly, the pain relief rate in the OE group was much lower than that in the non-OE group when viewed separately, which was not as expected. We speculated that OE itself may account for this expectation. Although the relationship between OE and painful symptoms is not well elucidated and is still controversial (19), it has been reported that 38.3% of the patients with OE experienced pelvic pain (20). Moreover, UAE has not been previously reported to be able to cure OE. The conventional treatments of OE include nonsurgical therapy based on mechanisms of action (iatrogenic menopause, pseudopregnancy and anti-inflammatory action) and surgery such as complete excision of the cyst wall, followed by ablation or coagulation of the cyst wall. Ovariectomy is the ultimate option (Figure 1). Therefore, OE itself may contributed to the pain in adenomyosis and UAE would do no help. 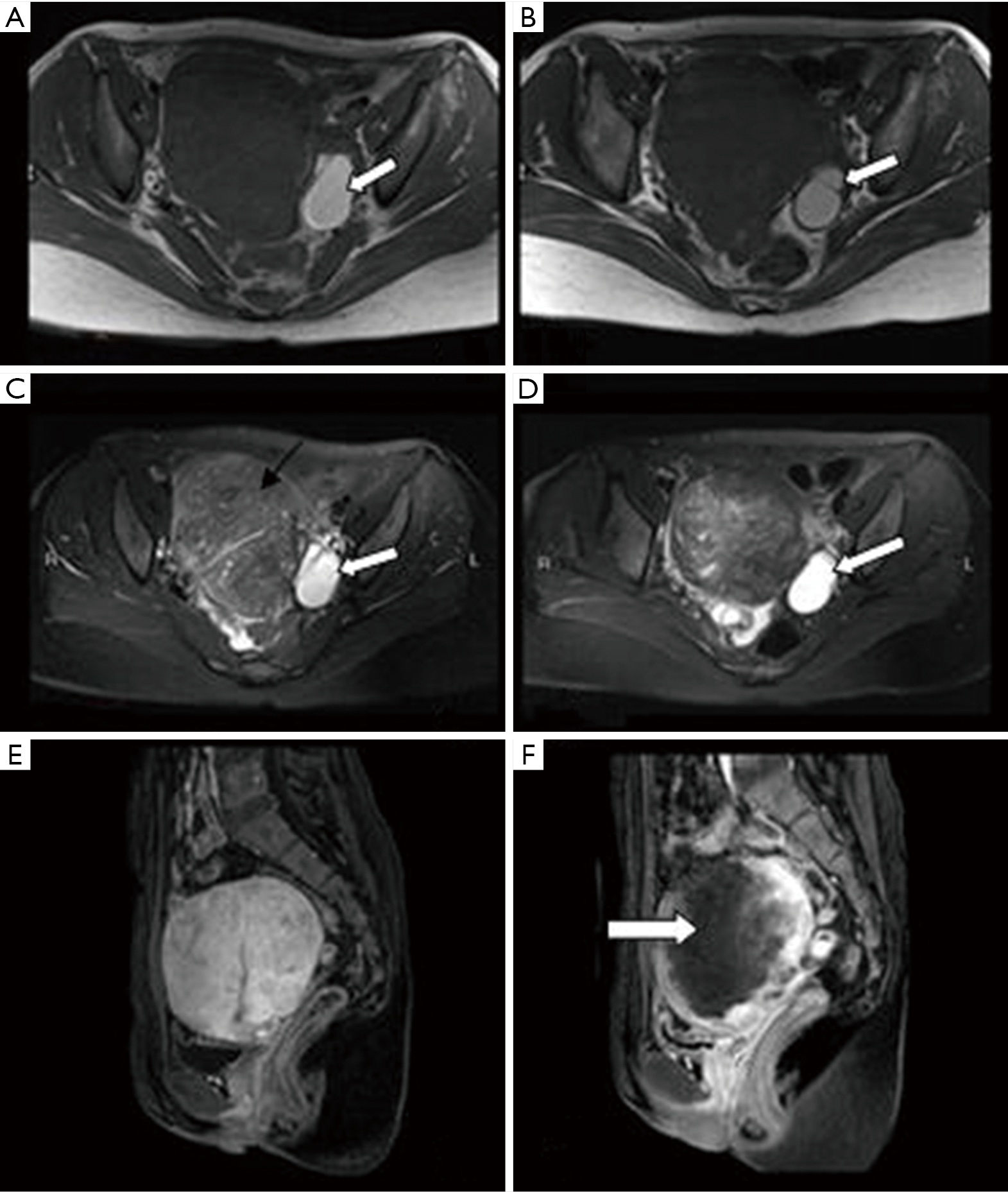 Additionally, patients with adenomyosis coexisting endometriosis may have a greater degree of uterine destruction, since endometrial glands and stroma in endometriosis are endowed with malignant biological characteristics. Endometriosis is not only able to invade the adjacent myometrium but also deeply infiltrate the distal myometrium close to the subserosa. The lesion of adenomyosis with OE may show poor response to UAE. Zheng reported that endometriosis was an unfavorable predictive factor for UAE, and patients combined with endometriosis were more prone to incomplete necrosis after UAE (21). However, there is no research available to explain the findings of this article, further study is needed.

Furtherly, our results showed no significant relationship in menorrhagia relief after UAE between the two groups (adenomyosis with OE and non-OE), which was consistent with our expectation before study. The lesion of adenomyosis increase the uterine volume and prolong the endometrium, thus leading to menorrhagia. However, OE has no effect on endometrium as well as menstrual quantity. UAE can cause different degrees of necrosis and reduced uterine volume, thus lead to a decrease in menstrual quantity.

Despite the favorable results, there are still several limitations in this study. First, the retrospective nature of the research itself and the single-center data limit the persuasion of the statistical analysis. Selection bias cannot be ruled out. Larger and prospective cohort studies are necessary to confirm the applicability of the results in the future. Second, the absolute value of symptoms, including the degree of dysmenorrhea and menorrhagia, is difficult to determine, which may lead to symptomatic bias. Third, the sample size is small because there are only 17 OE cases, which causes that there is at high risk of false negative findings. Other limitations of this study are the small sample size, short follow-up time and lack of completeness in follow-up data, which may claim undurable results.

Reporting Checklist: The authors have completed the STROBE reporting checklist. Available at http://dx.doi.org/10.21037/apm-20-1381

Conflicts of Interest: All authors have completed the ICMJE uniform disclosure form (available at http://dx.doi.org/10.21037/apm-20-1381). The authors have no conflicts of interest to declare.

Ethical Statement: The authors are accountable for all aspects of the work in ensuring that questions related to the accuracy or integrity of any part of the work are appropriately investigated and resolved. The study was conducted in accordance with the Declaration of Helsinki (as revised in 2013). This retrospective study was approved by the Institutional Review Board of The First Affiliated Hospital of Sun Yat-sen University with a waiver for informed consent [(2018)070].