Efficacy and safety of first-line treatments with immune checkpoint inhibitors plus chemotherapy for non-squamous non-small cell lung cancer: a meta-analysis and indirect comparison

Worldwide, lung cancer remains the major cause of cancer death (1). Non-small cell lung cancer (NSCLC) accounts for approximately 85% of all primary lung cancers, of which, nearly two-thirds of patients are diagnosed with the non-squamous histological subtype (2). Currently, platinum-doublet chemotherapy is the standard first-line treatment for patients with non-squamous NSCLC in the absence of epidermal growth factor receptor (EGFR) or anaplastic lymphoma kinase (ALK) aberrations, as molecular targeted therapy cannot be achieved in these patients (3), immune checkpoint inhibitors (ICIs), such as inhibitors of programmed cell death protein 1 (PD-1) and its ligand (PD-L1), can block the combination of PD-1 and PD-L1 in T cells and cancer cells, preventing tumor immunoevasion, and recovering the function of T cells for killing cancer cells (4). PD-1 and PDL-1 inhibitors have promoted the development of treatments for lung cancer (5-8). To date, a series of trials including CheckMate 017, CheckMate 057, KEYNOTE-010, and OAK have confirmed the benefit of these ICIs for decreasing the mortality risk of advanced NSCLC in the second-line setting (9). In recent studies, increasing evidence suggests that the immunological processes also have important anti-tumor activities in chemotherapy (10-12), thus, the combination of ICIs therapy and chemotherapy may be synergistic in improving anti-tumour activity. Several clinical studies have already evaluated the first-line use of ICIs combined with platinum-doublet chemotherapy in patients with non-squamous NSCLC. Superior overall survival (OS) and progression-free survival (PFS) were demonstrated with the addition use of ICIs in several previous studies (13-17). However, the differences in efficacy and safety between the various types of ICIs are still unclear in the first-line treatment of non-squamous NSCLC. The factors associated with improvements in PFS have been controversial in different trials. Also, some of the median OS rates have not been reached in published studies, and some of the studies might have violated the proportional hazards assumption when the hazard ratios (HRs) vary with time (18), suggesting that conventional measures of survival benefit have clinical limitations. Therefore, a meta-analysis and indirect comparison of the safety and efficacy of the additional use of ICIs in non-squamous NSCLC is urgently needed. Also, to reduce potential variability in survival benefit using conventional measures, an indirect comparison with a robust measure is needed.

Recently, restricted mean survival time (RMST), a robust summary measure which can measure the area under the survival curve up to a restricted time point, was confirmed to be a viable alternative approach that could overcome the limitations of conventional measures (19,20). Therefore, in this study, we performed a meta-analysis and indirect comparison measured with RMST in accordance with the following preferred reporting items for systematic reviews and meta-analyses (PRISMA) reporting checklist (available at http://dx.doi.org/10.21037/apm-20-1498) to evaluate the efficacy and safety of first-line use of ICIs in combination with platinum-doublet chemotherapy in patients with non-squamous NSCLC (21).

The quality of included studies was assessed using the Cochrane Collaboration’s risk of bias tool (22). Six key domains in the Cochrane Collaboration’s risk of bias tool were evaluated: random sequence generation, allocation concealment, blinding of participants, personnel and outcome assessors, incomplete outcome data, selective outcome reporting, and other sources of bias. Each domain was assigned to a risk status with low, medium, high, or unclear.

OS and PFS were expressed as a HR, and AEs were expressed as an odds ratio (OR). Review Manager (RevMan 5.3) software was used to calculate the pooled effect of HR [with a 95% confident interval (CI)] and OR (with 95% CI). Treatment regimens conducted subgroup analyses in the intervention group (PD-1 inhibitor and PD-L1 inhibitor). A P value of <0.05 was considered significant. Further subgroup analyses by PD-L1 expression, sex, age, liver metastatic status, and Eastern Cooperative Oncology Group (ECOG) score were also conducted to examine PFS’s factors. Heterogeneity between studies was tested using the χ2 test and I2 statistics. P value for χ2 <0.1 or an I2 statistic >50% was considered statistically significant for heterogeneity, and the random-effects model was used to calculate the pooled estimate in this situation. Otherwise, the fixed effect model was used. Additionally, for studies that enrolled similar patients with similar control chemotherapy regimens, an indirect comparison or network meta-analysis was performed to compare the treatment effects among the different ICIs. A link of similar chemotherapy regimen compared the treatment effects. For the indirect comparison, the following formulas was used as previously described (23): logHRAB=logHRAC − logHRBC, where logHRAB represents logHR of the adjusted indirect comparison for arm A vs. arm B, logHRAC represents logHR of the direct comparison for arm A vs. arm C, and logHRBC represents logHR of the direct comparison for arm B vs. arm C. The standard error (SE) was estimated by SE(logHRAB)= . The RMST was used as a supplementary endpoint when the reported follow-ups were not the same. R version 3.6.0 (R Project for Statistical Computing) was used to complete the indirect comparison.

Up to July 12, 2020, a total of 1,238 articles were identified. Finally, 5 studies matching the study inclusion criteria were identified. The study identification and selection process is shown in Figure 1. Trial characteristics of the eligible studies are list in Table 1. 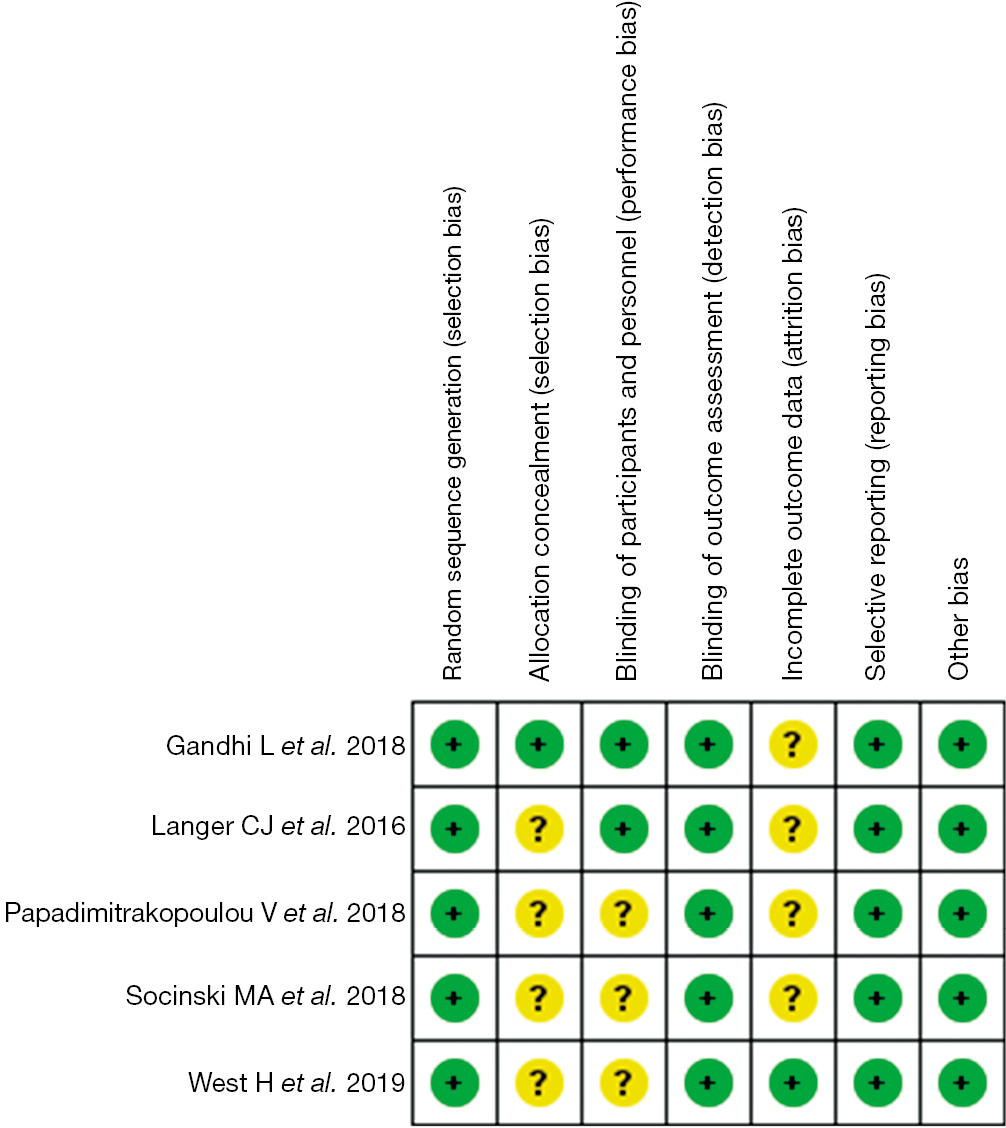 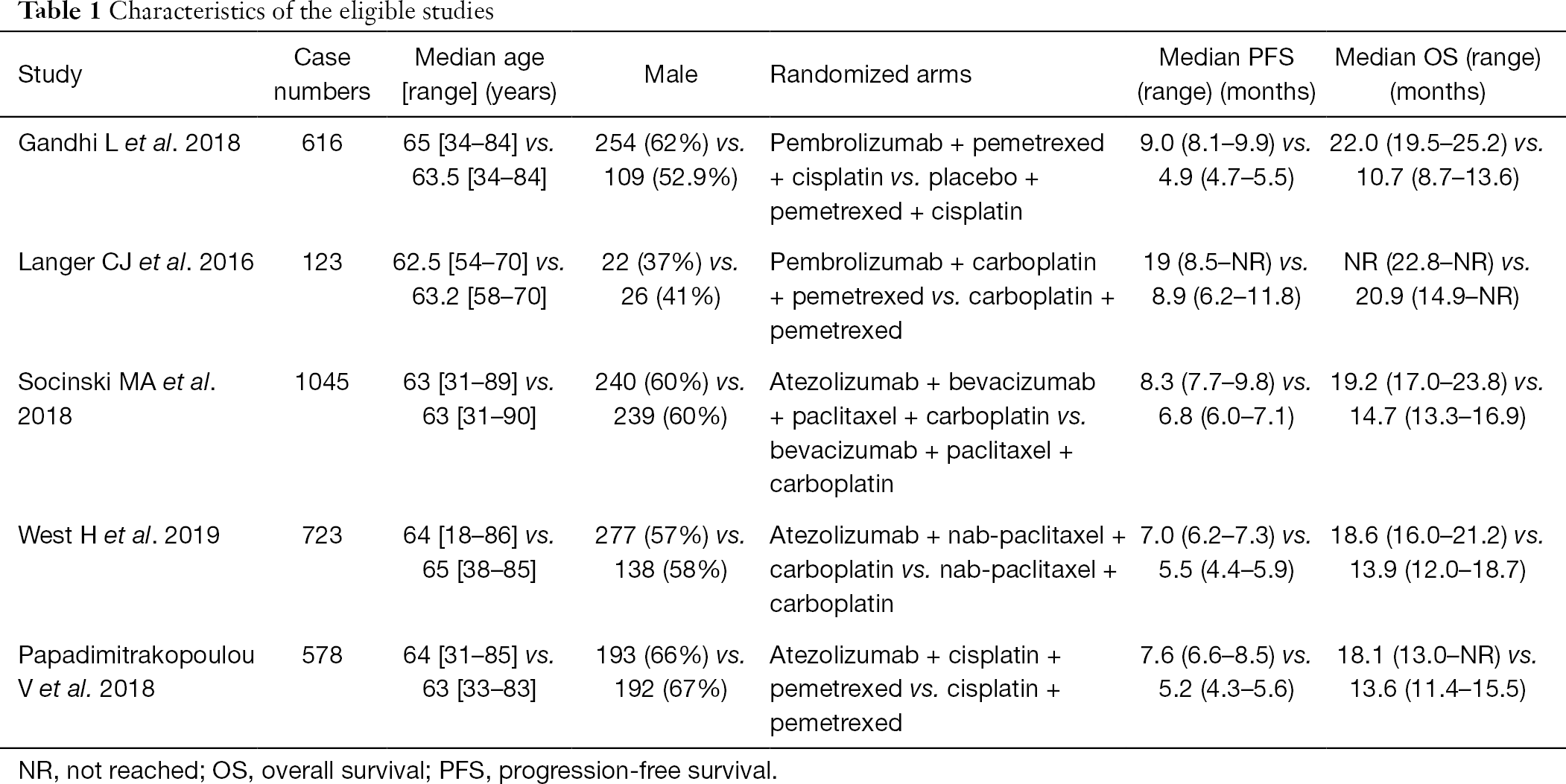 Since most of the included studies were open-label, detection bias, reporting bias, and other bias were all or mostly in the low-risk category. The risk of attrition bias was low in IMPOWER 130, while the others studies were unclear as the trials’ final results were not reported. The information for determining selection and performance bias was insufficient except for KEYNOTE-189, and these 2 items for most of the included studies were all assigned to a risk status of unclear. The risk of bias graph and summary are shown in Figure 2.

Pooled analysis of the OS and PFS

Chemotherapy combined with pemetrexed + cisplatin as a comparison was used in both KEYNOTE-189 and Impower-132. In these 2 trials, the PFS data was already matured, thus, we compared the relative effects for PFS. As a result, indirect comparison using the frequency method showed no significant difference between pembrolizumab + chemotherapy and atezolizumab + chemotherapy in the reducing of disease progression [HRindirect =0.80 (0.61–1.04)].

Indirect comparison of RMST for OS

The factors associated with PFS are listed in Table 2. Subgroups including PD-1 status [high (>50%), intermediate (1–49%), and negative (<1%) expression], sex (male and female), smoking status (current or former smoker and never smoked), liver metastases (with and without), age (>65 and ≤65), and ECOG score (ECOG =0 and ECOG =1) were all associated with better PFS. 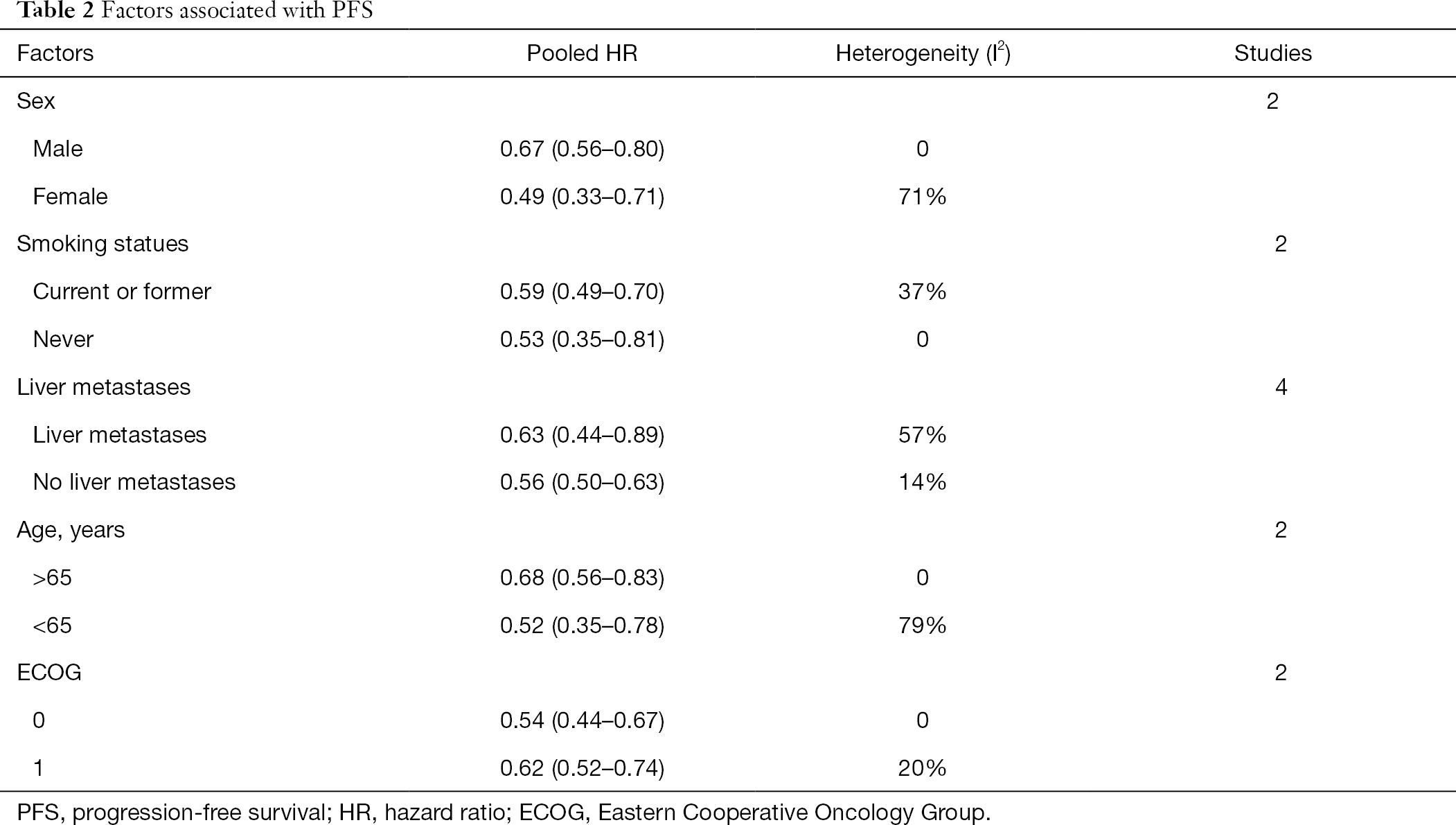 In recent years, clinicians have characterized advanced NSCLC using many driver mutations, such as EGFR, ALK, BRAF and KRAS. Consequently, molecularly-guided therapeutics have been used in patients with advance NSCLC (24). However, it is important to realize that several patients cannot benefit from these therapeutics if these oncogenic drivers are not presence. Hence, platinum-base chemotherapy doublets are still the standard first-line treatment for most advanced NSCLC patients. With the recent advances in immunotherapy, clinicians have realized that the early used of ICIs can confer a greater survival benefit for many solid tumors. Trials for first-line treatment of NSCLC have also been conducted. In the present study, we focused on the combination of chemotherapy and ICIs in the treatment of non-squamous NSCLC. A significant lower risk of disease progression and death was found in both the PD-1 inhibitor + chemotherapy [PFS: 0.52 (0.44–0.62), I2=0; OS: 0.63 (0.49–0.81), I2=0] and PD-L1 inhibitor + chemotherapy groups [PFS: 0.61 (0.56–0.68), I2=0; OS: 0.79 (0.70–0.90), I2=0] compared to conventional chemotherapy. Indirect comparison of the mature PFS data was conducted for pembrolizumab and atezolizumab based on 2 trials (KEYNOTE-189 and IMpower-132), and the results showed that the indirect HR was 0.87 (0.67–1.13). Furthermore, an indirect comparison of RMST for OS was also conducted, which demonstrated a greater RMST in the pembrolizumab combination group than atezolizumab combination group [1.63 (0.17–3.09) months]. However, these results should be interpreted carefully, even though the assumption of similarity and consistency were taken into account, randomization did not hold across trials, and potential treatment-effect modifiers might bias results. Therefore, head-to-head clinical trials comparing pembrolizumab and atezolizumab are needed to determine optimal ICIs.

The high number of NSCLC cases have been attributed to tobacco smoking. This aetiological association and the somatic mutations generated by tobacco smoking are particularly relevant to immunotherapy for cancer (25). In correlation with immunogenicity, increased activity of ICIs has been observed in smoking-induced NSCLC (26). Due to the lower immunogenicity in NSCLC patients who have never smoked, the efficacy of ICIs is not better than current and former smokers with NSCLC (27). The present meta-analysis demonstrated that for non-squamous NSCLC patients that have never smoked, these patients could still benefit from the additional use of ICIs in combination with chemotherapy in terms of PFS [0.53 (0.35–0.81), I2=0], and that this might be attributed to the combination effects, as potential immunogenic effects were also discovered with conventional chemotherapy (28).

The potential of PD-L1 expression status as a bio-marker to guide molecular selection for non-squamous NSCLC was also explored in this study. The results showed that a benefit in PFS was found regardless of PD-L1 status. For patients with high PD-L1 expression (>50%), the pooled HR for PFS was 0.41 (0.33–0.52, I2=0). For the intermediate PD-L1 expression (1–49%) and negative PD-L1 expression (<1%) subgroups, the pooled HR for PFS was 0.57 (0.47–0.70, I2=0) and 0.75 (0.64–0.86, I2=0). Importantly, the subgroup difference was significant (P<0.01), which may suggest that PD-L1 levels have predictive value for PFS benefit. However, the results should be interpreted carefully because of the inconsistent of evaluation methods used for the detection of PD-L1 protein levels in different studied (30), which might have introduced potential bias. Given this, standardized PD-L1 assay and evaluation methods and a uniform cut-off value, should be further discussed.

Nevertheless, our study still had some limitations. Firstly, this study was based on study-level evidence, the inclusion and exclusion criteria differences and the heterogeneity between studies might bias results. To minimize this limitation, we conducted subgroup analyses among treatment regimens. Additionally, the assessment of influencing factors and adverse events were mainly based on original studies without individual patient data, which might produce more reporting bias. Further large-scale real-world evidence is still needed to verify our results.

In conclusion, this meta-analysis confirmed the treatment effect of ICIs in combination with chemotherapy for non-squamous NSCLC. The additional use of pembrolizumab demonstrated greater benefit for PFS and OS with no significant increase in AEs (> grade 3). Furthermore, a greater RMST was demonstrated in the pembrolizumab combination group compared with the atezolizumab combination group. For ICIs with atezolizumab, despite the benefit in PFS and OS, more attention should be paid to the significant increase in AEs (> grade 3). Overall, for non-squamous NSCLC, current data suggest a PFS advantage for non-squamous NSCLC using ICIs combined with chemotherapy, irrespective of PD-L1 expression level, smoking status, liver metastasis status, sex, age, and ECOG scores. As all trials were conducted in patients with non-squamous NSCLC, these results' extrapolation is only valid in this population. To verify our results, further mature OS data is needed, and head-to-head clinical trials comparing pembrolizumab and atezolizumab are also needed to determine the treatment effects.

Reporting Checklist: The authors have completed the PRISMA reporting checklist. Available at http://dx.doi.org/10.21037/apm-20-1498

Open Access Statement: This is an Open Access article distributed in accordance with the Creative Commons Attribution-NonCommercial-NoDerivs 4.0 International License (CC BY-NC-ND 4.0), which permits the non-commercial replication and distribution of the article with the strict proviso that no changes or edits are made and the original work is properly cited (including links to both the formal publication through the relevant DOI and the license). See: https://creativecommons.org/licenses/by-nc-nd/4.0