Metabolic syndrome is a chronic health problem associated with high mortality, which is with composition of abdominal obesity, hypertension, dyslipidemia, and diabetes mellitus. Insulin resistance is a key part of metabolic syndrome pathophysiology. The inflammation caused by insulin resistance increases the risk of growing renal stones due to increased urate crystal deposition into the epithelial cells of the collecting tubes or the renal papilla (1). Recently, metabolic syndrome has received attention due to its association with a significantly increased risk of kidney stone development (2,3).

Kidney stones are common in the world, and flexible ureterorenoscopy (fURS) has a significant role in renal stone surgery. The American Urology Association (AUA), European Association of Urology (EAU) and other organizations recommend fURS as an optional method because it is known to increase the stone-free rate (SFR) compared with shock wave lithotripsy (ESWL). It can decrease operative complications, days lost from work, and hospital stay duration when compared with percutaneous nephrolithotomy (PCNL) (4-6). However, to date, few studies have been available to confirm the safety and efficacy of fURS in patients with metabolic syndrome. Furthermore, studies reporting the SFR of fURS in metabolic syndrome patients are still lacking. We therefore investigated the impact of metabolic syndrome on the safety and efficiency of patients who underwent fURS. We present the following article in accordance with the STROBE reporting checklist (available at http://dx.doi.org/10.21037/apm-20-2143).

Clinical data from 151 patients who underwent fURS for kidney stones at our institution were retrospectively analyzed between January 2014 and December 2016. Those who underwent fURS with transplanted kidneys or crosses fused kidneys and those with bilateral renal stones were excluded from the study. All of the patients were divided into two groups; group 1 consisted of patients diagnosed with metabolic syndrome, and group 2 contained patients without metabolic syndrome. The study was conducted in accordance with the Declaration of Helsinki (as revised in 2013). The study was approved by the ethics board of Peking University People’s Hospital Review Board (2020PHB 125-01) and written informed consent was obtained from all patients.

The diagnostic criteria of metabolic syndrome were according to the latest definition published in The Lancet (7). According to these criteria, metabolic syndrome was defined as coexistence of at least three of the following factors: (I) central obesity [body mass index (BMI) >30 kg/m2]; (II) elevated blood pressure (systolic ≥130 mmHg, or diastolic ≥85 mmHg) or use of hypertension control drugs; (III) high serum triglyceride levels (≥150 mg/dL) or use of drugs to control serum triglycerides; (IV) low HDL cholesterol levels (<40 mg/dL in men, <50 mg/dL in women) or use of HDL cholesterol control drugs; or (V) elevated fasting plasma glucose (≥100 mg/dL) or previously diagnosed type 2 DM.

Before the operation, urinalysis, urine culture, routine blood test, and serum biochemistry were performed for all patients. The patients’ kidney stones were evaluated by plain film of the abdomen, renal ultrasonography, and/or urinary CT scan. The stone burden before the operation was documented according to surface area.

Briefly, the patients were in a lithotomy position and received general anesthesia. All patients were also treated with antibiotic drugs before fURS. At the beginning of the surgery, a routine ureteroscopy was performed to assess the ureteral condition, and hydrophilic guidewires were then placed in the renal pelvis. After the ureter was measured, a ureteral access sheath (UAS, Flexor 12/14F, Cook) was placed over the hydrophilic guidewire, which provided an entry point for the fURS procedure and allowed removal of large stone fragments. A fURS was used to reach the renal pelvis, and the stones were broken with a holmium laser (Power Suite 60W Plus, Lumenis). The stones were fragmented to debris less than 4 mm or extracted using the stone basket. A 200-µm fiber was used to delivered the laser energy (0.6 J at 30 Hz). At the end of the surgery, all of the patients were placed a double-J stent, and the stent was removed 30 days after surgery. For patients in whom the UAS failed, a fURS was placed over the guidewire, and the procedure was performed without using the UAS. If the fURS could not reach the renal pelvis for ureteral stenosis, a DJ stent was placed in the ureter for 1 week, and then a second fURS were performed. The same surgical approach was used for all 151 patients. The operative duration was calculated as the time from the entrance of the fURS to the final placement of a DJ stent.

The follow-up examination included a plain film of the abdomen including kidneys, ureters, and bladder (KUB) on day 1 postoperatively and a renal ultrasonography or a KUB film at 3 months postoperatively to judge whether residual stones existed in the kidney. The stone-free statue was defined as the disappearance of renal stones or the presence of fragments less than 4 mm in size based on the postoperative imaging test. The modified Clavien classification system was used to classify the complications of ureteroscopy (8).

The general characteristics of the patients (including age and gender) and the kidney stones (including the size, side and location), surgical time and complications, length of stay in hospital and the SFR were compared between the two groups.

All values are presented as the means ± standard deviation for continuous variables and as frequencies and percentages for categorical variables. The group comparisons were performed using the Student t-test for qualitative values. The chi-squared test was used to analyze the proportions of categorical variables. A P value less than 0.05 was set for statistical significance. Statistical analyses were performed using SPSS 17.0 software for Windows.

A total of 151 patients were retrospectively analyzed and divided into 2 groups according to diagnosis of metabolic syndrome. Of these patients, 60 diagnosed with metabolic syndrome (group 1), and 91 did not (group 2). Table 1 shows the preoperative data for both groups. No significant differences were found between the two groups regarding gender, age, and the size, laterality, and location of stones and hydronephrosis. The average stone size for group 1 was 71.9±58.3 mm2 and for group 2 64.9±43.7 mm2 (P=0.399). 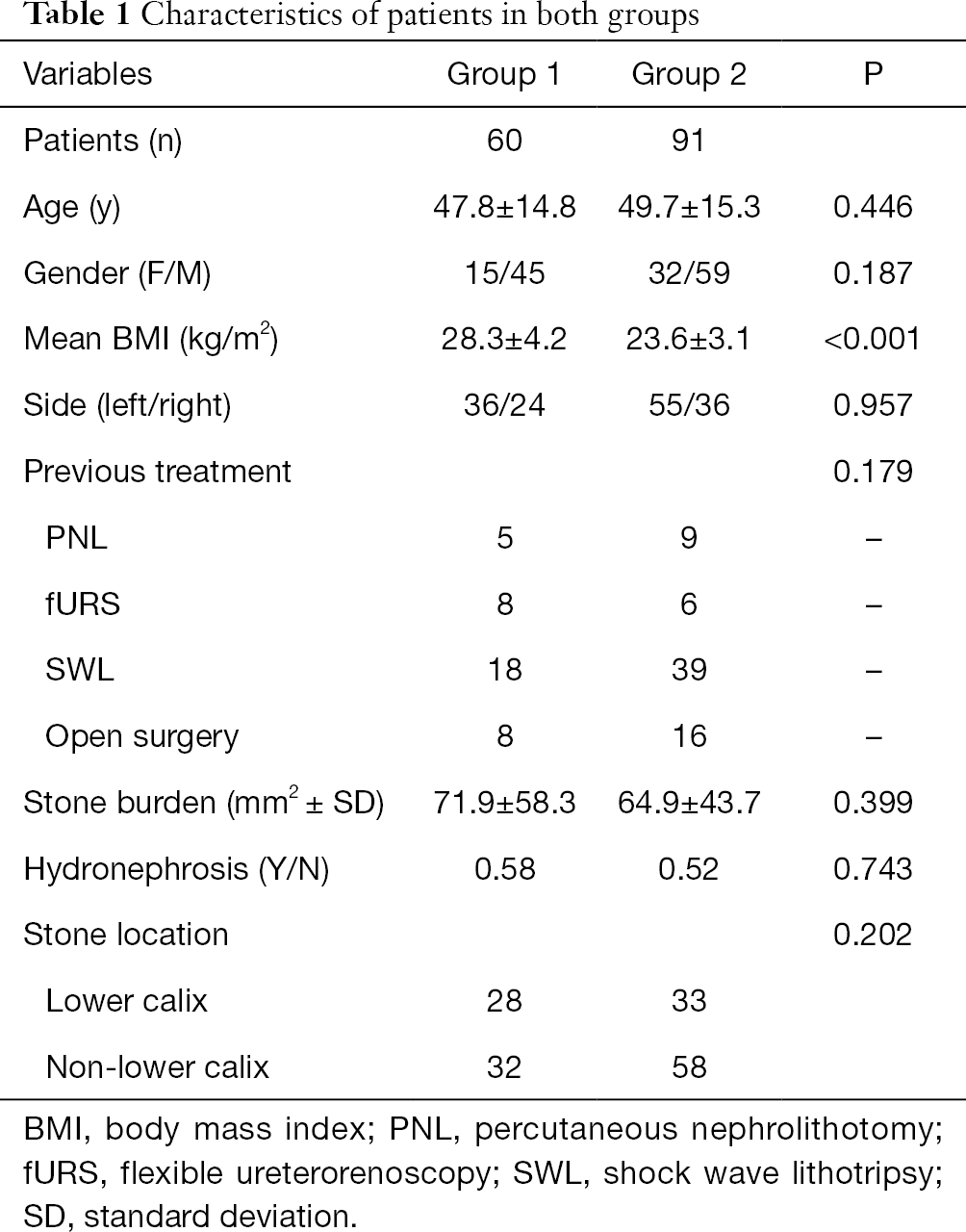 Table 1 Characteristics of patients in both groups
Full table

The operative and postoperative clinical data for the groups are shown in Table 2. The average surgical duration for group 1 was 65.1±27.9 minutes and for group 2 was 67.8±28.0 minutes (P=0.566). In group 1, 1 patient underwent a second fURS for the ureterostenosis, and in group 2, 2 patients received additional surgery (1 patient with 2nd stage mPCNL for the hydronephrosis and 1 patient with a second fURS). There was no significant difference between the groups in hospital length of stay. Only mild complications including fever (Clavien I) were noted in group 2 intraoperatively or postoperatively. However, in group 1, 4 patients had fever after RIRS (Clavien I), and 1 patient had urosepsis and needed an advanced antibiotic and vasoactive drugs for circulatory support (Clavien IV). The total complication rates for the groups were similar, and no significant difference was observed (8.3% in group 1, 12.1% in group 2; P=0.514) (Table 2). The SFR at the first day postoperative for groups 1 and 2 were 75%, and 76.9%, respectively (P=0.786). After 3 months of follow-up, the overall SFR for groups 1 and 2 increased to 80.0% and 92.3%, respectively (P=0.026) (Table 2). 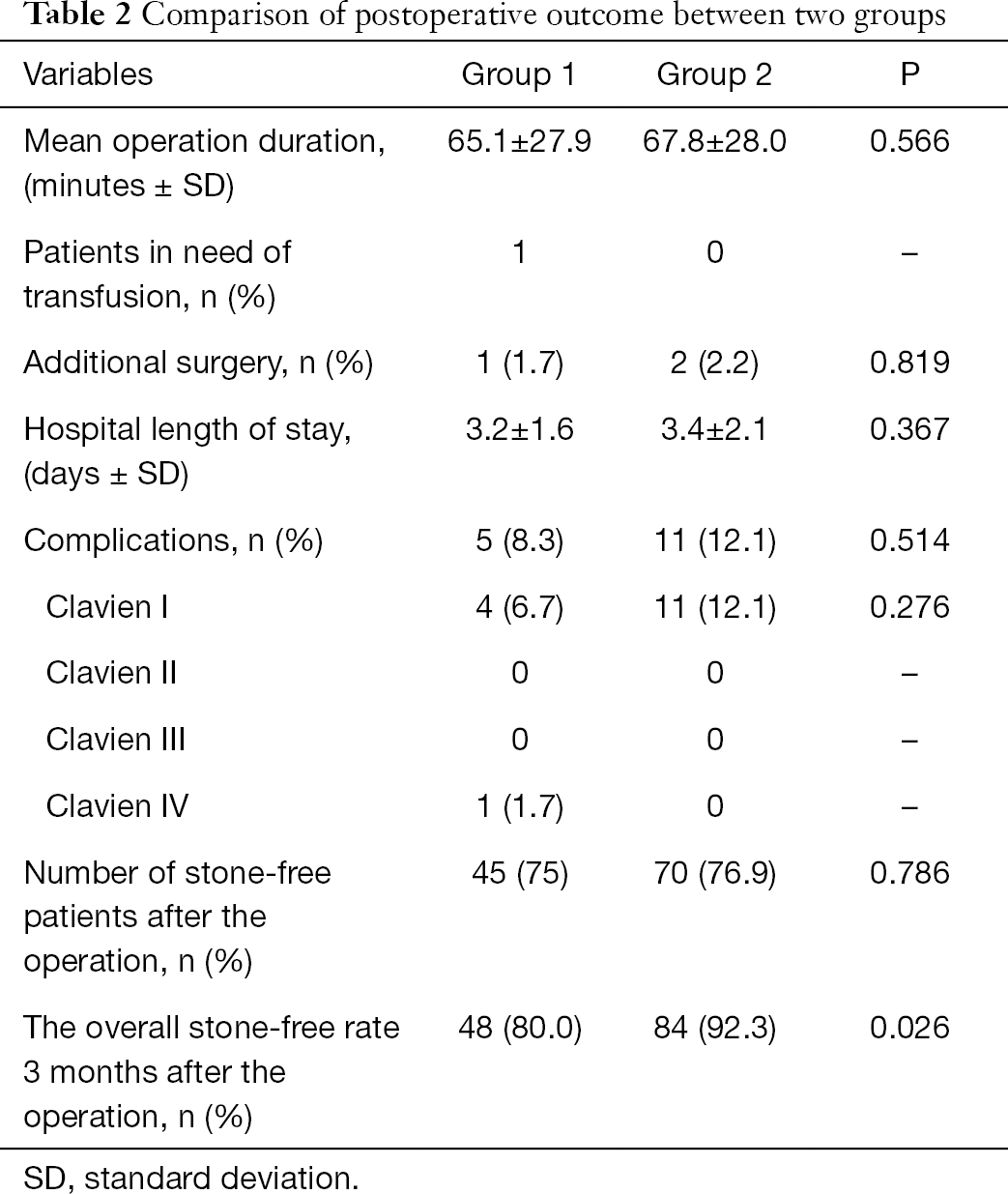 With the technological developments in flexible ureteroscopes and lasers, these tools have been increasingly used in the treatment of nephrolithiasis, and an increasing number of studies have showed the higher SFR in fURS compared with PCNL, especially in patients with stone burdens less than 2 cm (12,13). Akman et al. reported the complications of PCNL in metabolic syndrome patients. They demonstrated that the mean days in hospital and mean hemoglobin levels of patients in the metabolic syndrome group were significantly higher than those in control group, and they revealed that the rate of Clavien grade 3a complications (patients treated with a DJ stent after the operation) was significantly higher (14). Nalbant et al. found that patients with metabolic syndrome had longer average length of hospital stay and operation time than normal control group, while postoperative SFR was lower than that of control group (90% vs. 96.1%). This may be related to the fact that patients with metabolic syndrome are more likely to form uric acid calculus (15). Aboumarzouk et al. published a meta-analysis of the safety and efficacy of fURS in obese patients (16). They analyzed 7 studies including 131 patients (average BMI 42.2) with urinary calculi who were treated with fURS, and the overall SFR was 87.5% after the fURS treatment. Their study also showed that the overall complication rate was 11.4%, but no patients with severe complications needed further treatment. Some studies showed increased stone burden in obese patients treated with fURS, and the complications related to anesthesia also increased, which may be due to the long operative time. However, in our study, no complications related to anesthesia were found. Moreover, the mean operative time was 65.1±27.9 minutes in the metabolic syndrome group and 67.8±28.0 minutes in the non-metabolic syndrome group (P=0.566, respectively). Our data showed that fURS was safe for patients with metabolic syndrome with renal stones.

Reporting Checklist: The authors have completed the STROBE reporting checklist. Available at http://dx.doi.org/10.21037/apm-20-2143

Conflicts of Interest: All authors have completed the ICMJE uniform disclosure form (available at http://dx.doi.org/10.21037/apm-20-2143). The authors have no conflicts of interest to declare.

Ethical Statement: The authors are accountable for all aspects of the work in ensuring that questions related to the accuracy or integrity of any part of the work are appropriately investigated and resolved. The study was conducted in accordance with the Declaration of Helsinki (as revised in 2013). The study was approved by the ethics board of Peking University People’s Hospital Review Board (2020PHB 125-01) and written informed consent was obtained from all patients.