In the past 20 years, cancer treatment has developed rapidly, with hugely improved efficacy (1). However, for patients with advanced cancer, there is also growing concerned over cancer care’s aggressiveness near the end of life (EOL) (2,3). The use of chemotherapy increases significantly in patients with advanced cancer in the last weeks of life (4-6).

When to cease chemotherapy, treatment is significantly important for the patient’s quality of life (QOL), and it is considered to be a quality assurance factor for EOL patients with cancer. Earle et al. suggested that indicators of quality of EOL palliative care should be identified, and they concluded that the continued use of chemotherapy for patients with cancer who were very near to death represented overly aggressive care (7). A Canadian study showed that factors such as cancer type, palliative care assessment, female sex, physician house calls, and utilization of home care were significantly associated with decreased use of EOL chemotherapy (4). Furthermore, aggressive care may be associated with living in an area with higher numbers of teaching hospitals and being cared for in teaching hospitals (2).

In the present study, we aimed to explore the percentage of patients with metastatic cancer treated by PCT and examined treatment intensity indicators and the differences between administration of targeted therapy and chemotherapy during the last month of life. We aim to use this research to explore the current status of chemotherapy and targeted therapy for patients with advanced cancer in the last month, to avoid futile treatment, and improve palliative care for patients with terminal cancer. We present the following article in accordance with the STROBE reporting checklist (available at http://dx.doi.org/10.21037/apm-20-1845).

The study was conducted in accordance with the Declaration of Helsinki (as revised in 2013). This study was approved by the institutional research ethics committee of Fudan University Shanghai Cancer Center (No. 081564-3-1051: the registration number of ethics board) and individual consent for this retrospective analysis was waived. A total of 585 patients who had received targeted therapy or PCT between April 2007 and December 2018 at the Department of Integrated Therapy of Fudan University Shanghai Cancer Center were included in this retrospective study. Exclusion criteria were: (I) patients not found by the medical oncology service; and (II) patients diagnosed with a hematological malignancy.

Excel for Windows version 13 (Microsoft Corp., Redmond, WA, USA) and SPSS version 20.0 (IBM Corp., Armonk, NY, USA) was used to analyze the data. P<0.05 was considered to be statistically significant. Logistic regression modeling was used, the results of which are expressed as odds ratios (ORs) and their corresponding 95% confidence intervals (CIs). 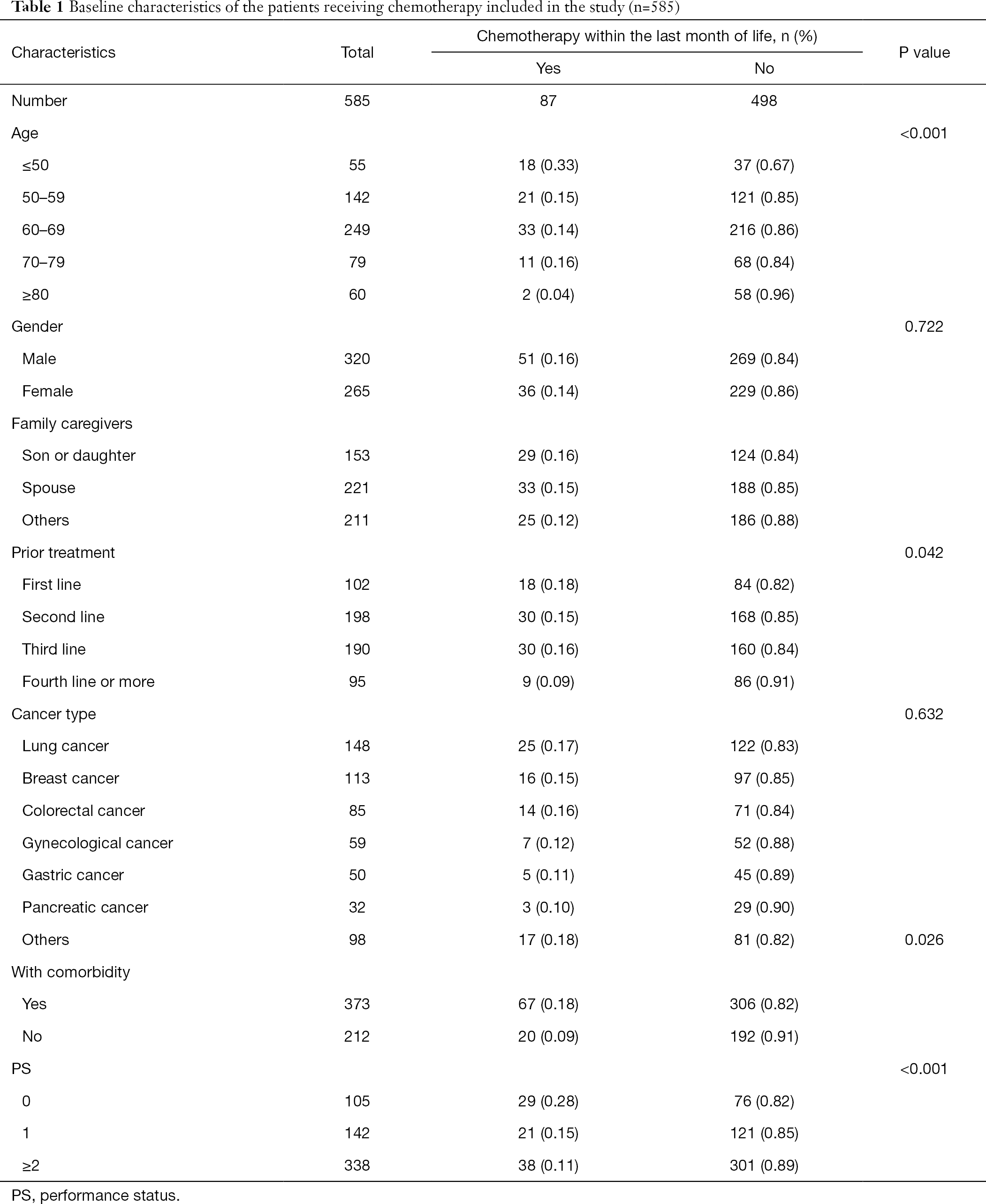 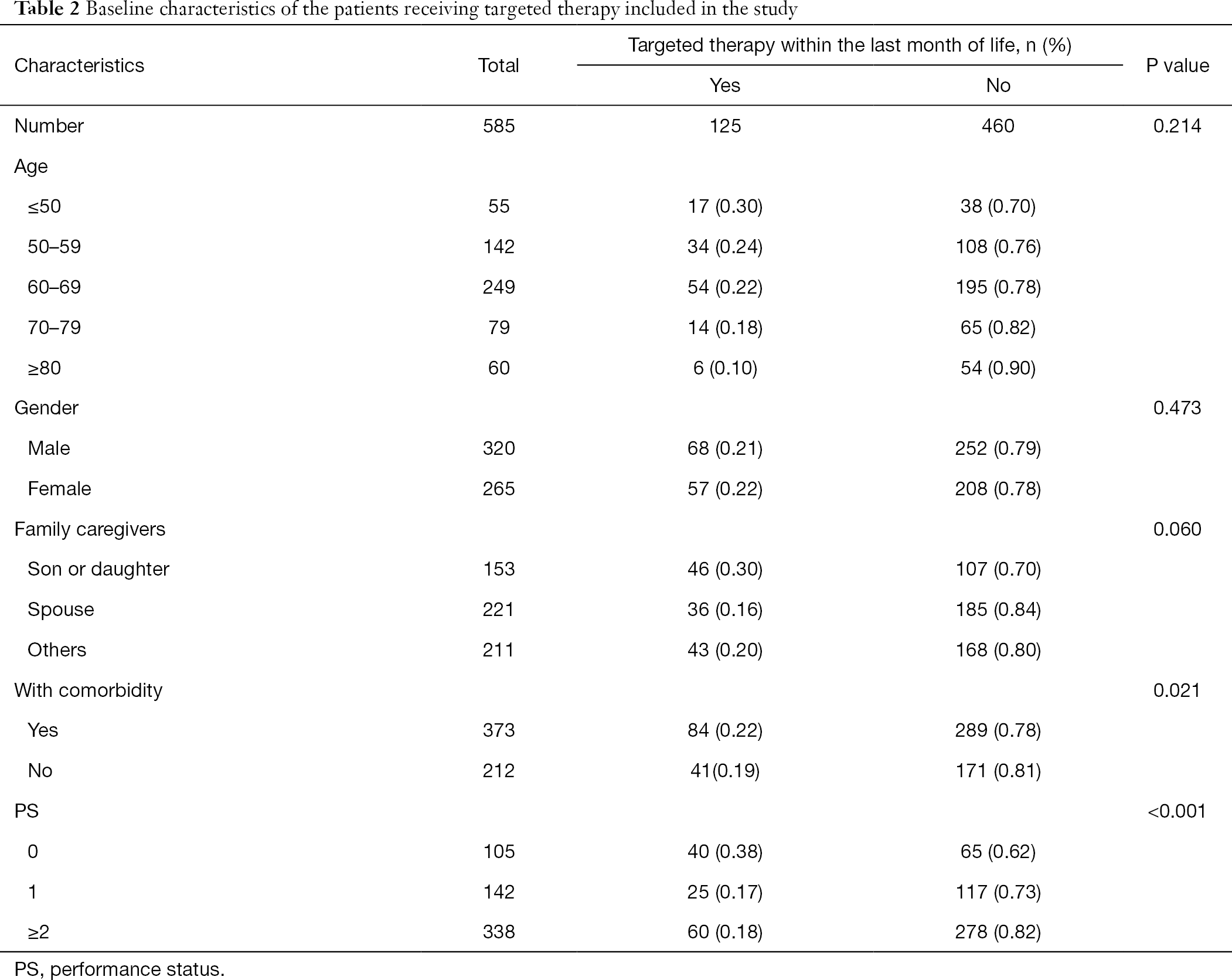 Indicators of aggressive care with targeted therapy and PCT 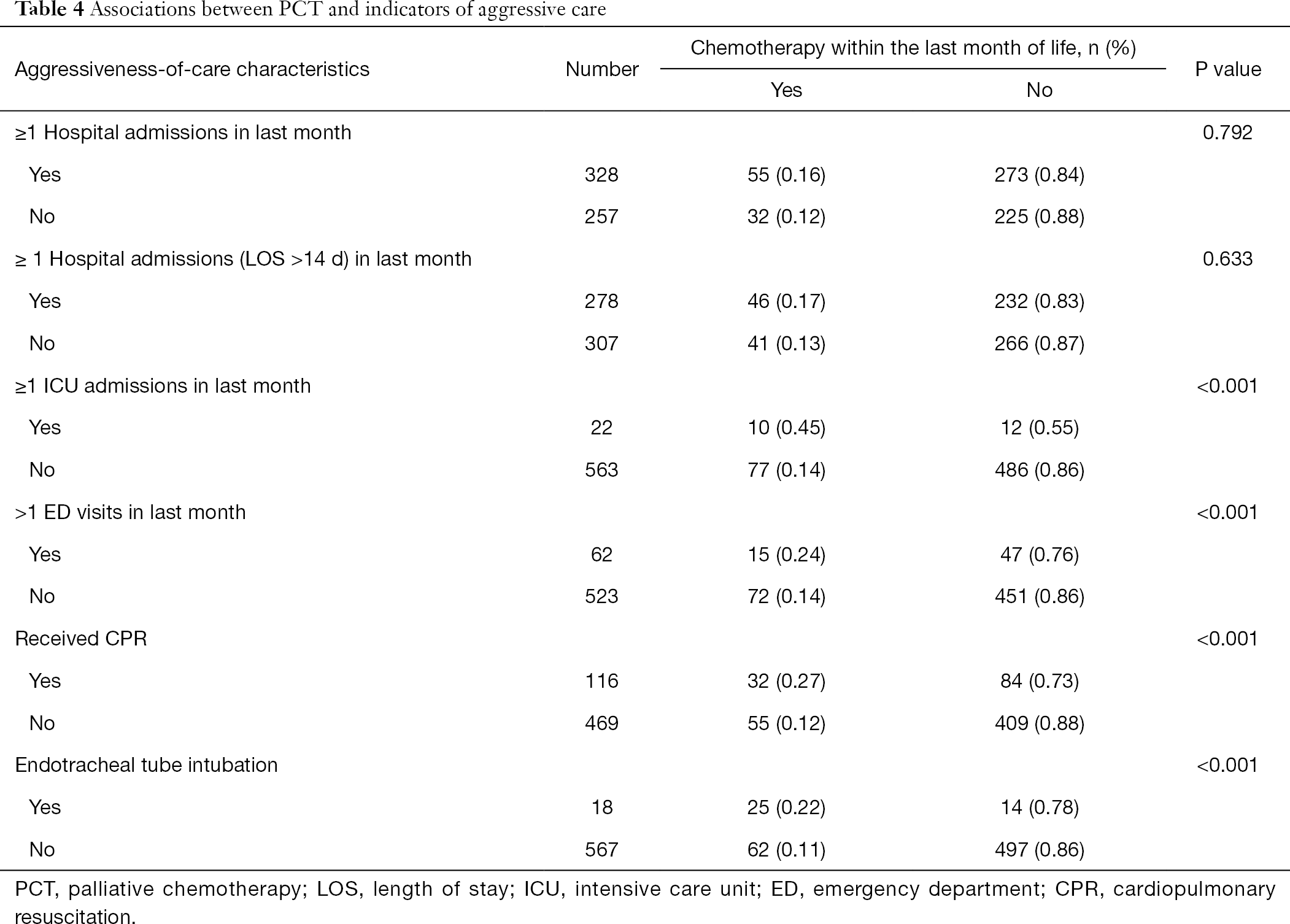 Difference between targeted therapy and PCT

We found that most lung cancer patients received targeted therapy in the terminal stage (P<0.001). We also found that receiving targeted therapy correlated with higher rates of admission to the ICU (P<0.001) (Table 6). Logistic regression-based multivariate analysis showed that lung cancer was an independent predictor of targeted therapy administration (OR, 4.18; 95% CI, 2.29–5.48; P<0.001), and admission to the ICU was an independent predictor of PCT administration (OR, 2.18; 95% CI, 1.81–2.75) (Table 7). 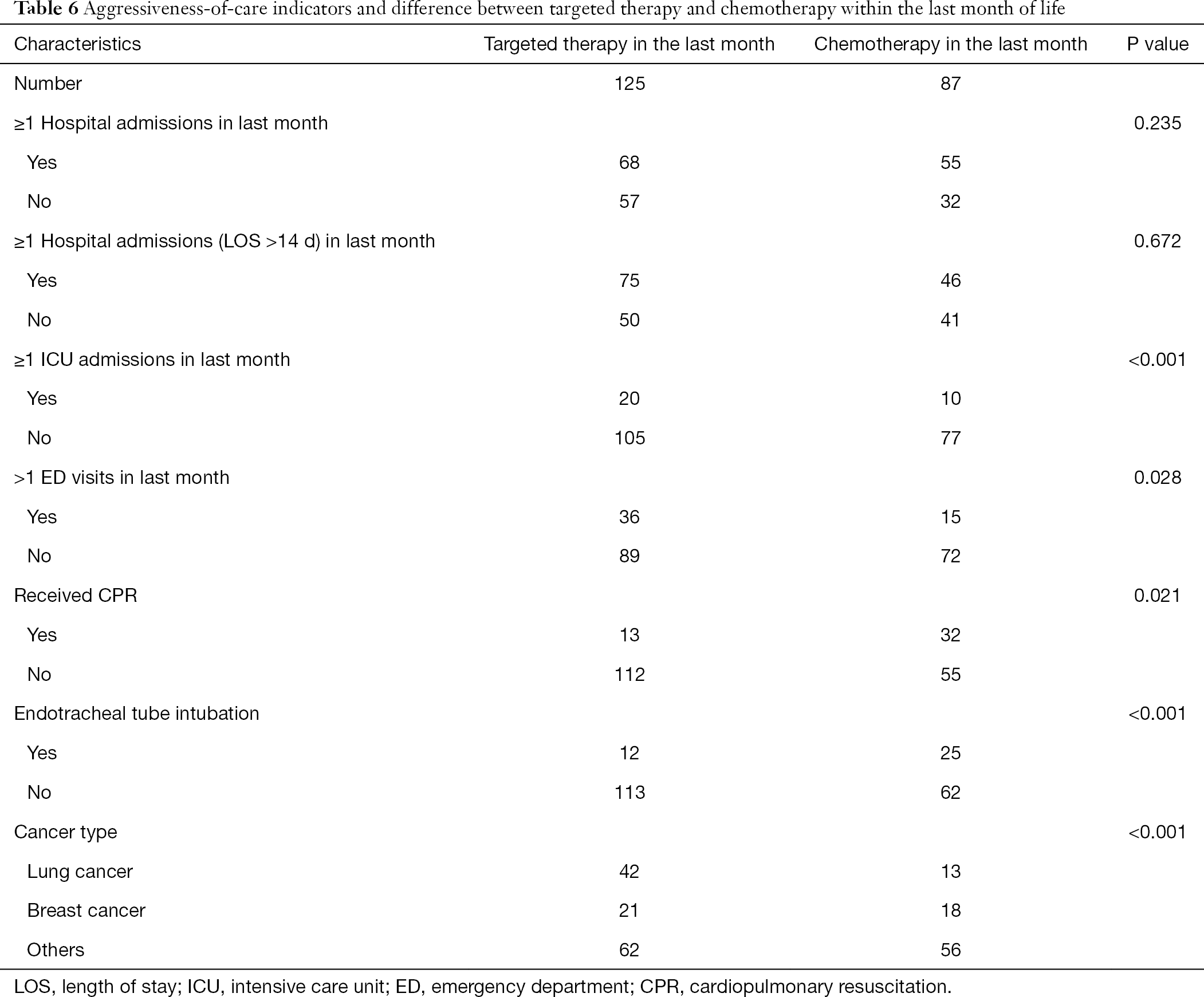 The present study investigated the use of EOL chemotherapy and targeted therapy using data from 585 consecutive patients who died of advanced cancer. Our results showed that receiving targeted therapy correlated with lower rates of admission to the ICU in comparison with PCT.

At the EOL, more detailed conversations among physicians, caregivers, and patients could reduce aggressive treatment incidence, resulting in a significantly better QOL in the last month of life (10). However, for patients who are dying from advanced solid tumors, decision-making in EOL treatment is complex. Deciding on a more aggressive intervention involves access to a hospice, knowledge, and attitude of the patients and their families toward hospices and PCT, and their relationship with primary and specialist physicians. Unfortunately, the administrative data used in this study did not include these preferences.

Some physicians from cancer-specialty hospitals have systematically studied palliative care guidelines, but as a rule, physicians overestimate prognosis by at least 30% (11). Those from general hospitals lack professional palliative care knowledge, and it is difficult for many oncologists and caregivers to provide the option of stopping chemotherapy (12,13). Hesitation regarding cessation of futile PCT might lead to more aggressive EOL care and life-sustaining treatment. In China, some caregivers ask physicians not to tell the truth concerning the patient’s condition, so that patients fail to receive the full picture regarding their disease and do not understand the purpose of palliative care, and they believe that their diseases are curable (14). Patients thus have high expectations of palliative therapy and will accept the adverse events and toxicity to prolong their survival (15). It has been reported that patients would prefer to receive aggressive chemotherapy, even if it only prolonged their life for 1 week because most patients do not receive enough information about the benefits of PCT (16).

Our study showed that in the last month of life, 14.9% of patients received PCT, which was in line with international recommendations. However, a Portuguese study indicated that the prevalence of chemotherapy within the last month of life could be as high as 37% (17). One reason is that in more affluent countries, patients have a high chance of receiving a medicalized death and futile treatments (18). Another explanation is that older EOL patients in China are more inclined to receive traditional Chinese medicine (TCM) than Western medicine, which would lead to the low use of chemotherapy.

Our results showed that younger patients (<50 years old) with a PS <2 received more aggressive EOL chemotherapy and targeted therapy. There are several possible explanations for this. Patients younger than 50 years old mostly had better education and tended to choose Western medicine in preference to TCM, explaining why this subgroup was more likely to receive PCT. The younger patients also had lower rates of comorbidity and received more rounds of cytotoxic chemotherapy. There is a complex relationship between aggressive care and comorbidity. Patients with comorbid conditions were less likely to receive chemotherapy. If they did receive it, they were more likely to be admitted to the ICU or go to the hospital in the final month of life (4). Admission to ICU and receipt of CPR were more frequent in patients treated with PCT than in patients who received targeted therapy in the last month of life. Previously, the therapeutic options of patients with advanced cancer were limited to cytotoxic chemotherapy. Over the past decade, cancer treatment, such as advanced non-small cell lung cancer, has changed markedly. Successful therapies that target patients with anaplastic lymphoma kinase rearrangements or epidermal growth factor receptor mutations have been developed (19-21). In cases of a specific oncogenic driver gene being identified, most people will choose targeted therapy. Therefore, targeted therapy was used more often than traditional chemotherapy agents that often have lower toxicity and fewer complications. Our results showed that patients who received targeted therapy received less aggressive treatment, such as ICU admission and CPR.

Every individual at the EOL has a right to pursue life prolongation at any cost. We cannot consider that their aggressive care is unnecessary. However, mounting evidence suggests that most dying patients do not desire such care (22-24). Research also suggests that less aggressive care is cheaper and less upsetting for surviving members of the patient’s family (10,25-27). Accordingly, the arguments in favor of less aggressive EOL care suggest that discussions about changing EOL care should occur earlier to ensure that palliative treatment is consistent with the patient’s preferences.

According to these data, we hypothesize that the adverse events or toxicity associated with intravenous chemotherapy outweigh its benefit over the whole treatment course, especially at EOL. Considering the increasing availability of targeted therapies, we require a deeper understanding of EOL care roles. Also, in this study, we lacked detailed knowledge about the factors affecting EOL chemotherapy decision making among physicians, patients, and their caregivers, such as the values and beliefs of the patients and physicians and discussion about decision making on EOL care. These factors will also contribute to patients’ choices at EOL, for example, ED visits, admission to ICU, increased hospital admissions, or decreased hospice use (28).

There are also some limitations to our study. Firstly, one significant limitation of this study is a single-center study only, and it was a retrospective study that relied on hospital records. Secondly, we did not analyze the role of targeted therapy in the terminal stage. Also, a detailed analysis of the relationship between PCT and survival rate of patients was not performed.

Reporting Checklist: The authors have completed the STROBE reporting checklist. Available at http://dx.doi.org/10.21037/apm-20-1845

Conflicts of Interest: All authors have completed the ICMJE uniform disclosure form (available at http://dx.doi.org/10.21037/apm-20-1845). The authors have no conflicts of interest to declare.

Ethical Statement: The authors are accountable for all aspects of the work in ensuring that questions related to the accuracy or integrity of any part of the work are appropriately investigated and resolved. The study was conducted in accordance with the Declaration of Helsinki (as revised in 2013). This study was approved by the institutional research ethics committee of Fudan University Shanghai Cancer Center (No. 081564-3-1051: the registration number of ethics board) and individual consent for this retrospective analysis was waived.