Ankylosing spondylitis (AS) is a common chronic inflammatory rheumatic disease, mainly involved with the axial skeleton and adjacent soft tissues. It can cause characteristic inflammatory back pain, peripheral arthritis, enthesis, etc., and lead to structural and functional impairments and a decrease in quality of life. New imaging techniques and therapies have substantially changed the management of this disease in the past decade (1).

For most traditional treatment is ineffective AS patients, tumor necrosis factor α (TNF-α) inhibitors can quickly take control of synovitis, reduce pain and stiffness, even delay the destruction of cartilage and bone, improve patients’ quality of life and reduce disability rate (2). It is difficult for most AS patients to afford long-term treatment costs. China has a high incidence of tuberculosis and hepatitis B, TNF-α inhibitors, long-term application, tuberculosis, and hepatitis B incidence are likely to rise (3-5). Therefore, it is necessary to search for drugs to effectively improve AS patient’s condition and suitable for china’s basic national conditions.

Moreover, since AS is often delayed healing or recurrent, patients often accompanied by anxiety, depression and sleep disorders, making AS more complicated and difficult to treat (6-8). Anxiety, depression and sleep disorders not only reduce the pain threshold, but they can also increase the severity of pain, enlarge body perceived function (including pain), impair patients’ adaptation to pain for the tolerance (9-11). The reduction to cope with somatic disease capacity also has a negative impact on the treatment and rehabilitation programs of patient’s desirability (12). Therefore, AS should take rational and effective integrated interventions to get the best efficacy.

Thalidomide is a relatively broad spectrum of immunosuppressants that can inhibit the inflammatory processes the interleukin (IL)-1, IL-6 and TNF-α produced (13,14). Our previous studies have reported that thalidomide is safe and effective for refractory AS. Besides, there is no evidence to suggest that thalidomide will increase the chance of developing tuberculosis or hepatitis B at present (15,16). People with anxiety, depression and sleep disturbances are associated with serum in the elevated of IL-1, IL-6 and the TNF-α (17-19). After injection with IL-1 or TNF-α, it can induce sleep deprivation or depression-like symptoms (20). Thalidomide may be treated AS the same time, but also have a positive effect on psychological symptoms and sleep disturbances. The study enrolled a larger sample size of refractory AS patients. Thalidomide was treated somatic symptoms of AS patient’s efficacy and safety to determine whether it had a positive impact on refractory AS patients with psychological symptoms and sleep disorders.

We present the following article in accordance with the TREND reporting checklist (available at http://dx.doi.org/10.21037/apm-19-409).

Long-term follow-up of AS patients was recruited from two rheumatology clinics and departments in Fujian Provincial Hospital. Inclusion criteria: (I) comply with the 1984 revision of New York AS classification criteria; (II) comply with disease activity standard: the scores of BASDAI ≥4; (III) refractory AS standards: traditional therapies are not valid (including non-steroidal anti-inflammatory drugs, sulfasalazine, methotrexate, and corticosteroids, etc.), or adverse reactions could not be tolerated; (IV) the scores of nocturnal pain and total back pain ≥4; (V) married with children or almost 2 years with no fertility requirements; (VI) normal liver and kidney function; (VII) ability to read and understand the contents of the questionnaires. Exclusion criteria: (I) combined with malignant tumors, Fibromyalgia syndrome, and other chronic somatic diseases; (II) associated with other mental illnesses. Before starting the medication, patients were informed that they must take effective contraceptive measures during the use of thalidomide. The study was conducted safety and security in accordance with the United States Celgene Corporation formulated of thalidomide education and Prescription safety system (STEPS) standard. This study was approved by the ethics committee of Fujian Provincial Hospital (approval ID: K-2018-10-014) and conducted in accordance with the Declaration of Helsinki (as revised in 2013). All the subjects included in this study have been informed in detail and signed the informed consent.

All enrolled patient’s age, gender, duration, and other information, and physical status, psychological and sleep were recorded and assessed at baseline, 3 months and 6 months. Blood samples were taken to measure ESR, CRP level. The pain included nocturnal pain; last week/spine/at night due to AS, total back pain; last week/spine/due to AS). The pain score was determined from a visual analog scale (VAS), recording from 0 cm (none) to 10 cm (very severe). The revised SAS was used to evaluate the level of anxiety-related symptoms during the last week before the survey. This self-administered test has 20 questions, with 15 items worded toward increasing anxiety levels and five questions worded toward decreasing anxiety levels. Each question was scored on a scale of 1–4 (rarely, sometimes, frequently, and always).

Thalidomide (Changzhou pharmaceutical factory, 50 mg/tablet) was used 50 mg/d as an initial dose before sleep. Every 7 d increased by 50 mg/d until it reached 150 mg/d. Before starting treatment with thalidomide, patients were taking all Disease-Modifying Antirheumatic Drugs (DMARDs) should be discontinued. Non-steroidal anti-inflammatory drugs could be maintained, but dose could not be increased. Symptoms Controlled can be discretionary reductions, with a minimum effective dose to maintain. If the patient appeared suspicious neuritis symptoms such as numbness, tingling, and others, thalidomide would be stopped treatment.

The data were analyzed using the Statistical Package for the Social Sciences (SPSS) version 17.0, disease-related parameters using descriptive statistics. The data of baseline, 3 months and 6 months were used with analysis of variance, rate of comparison was tested with chi-square test, the statistical significance level was considered at P<0.05.

Effectiveness and adverse reactions of thalidomide

Table 1 AS patients at baselines, the end of 3rd month and the end of 6th month within each detection index comparisons between groups
Full table

The end of 3rd month compared with baseline values

Thalidomide was used to treat AS patients. All clinical parameters, including ESR, CRP, nocturnal pain, total body pain, BASDAI, BASFI, fingertip-to-floor distance, SDS, SAS and PSQI, had significantly lower levels at month 3 when compared to initial levels. The difference was statistically significant (P<0.05). But there was no statistical difference in BASMI consistently (P>0.05).

The end of 6th month compared with baseline values

The levels of ESR, CRP, BASMI, BASFI, SAS and PSQI were no significant change at the end of 6th month (P>0.05). But the levels of nocturnal pain, total body pain, BASDAI, fingertip-to-floor distance, and SDS, at 3rd month, decreased significantly when compared with those of the 6th month (P<0.05) (Table 2). 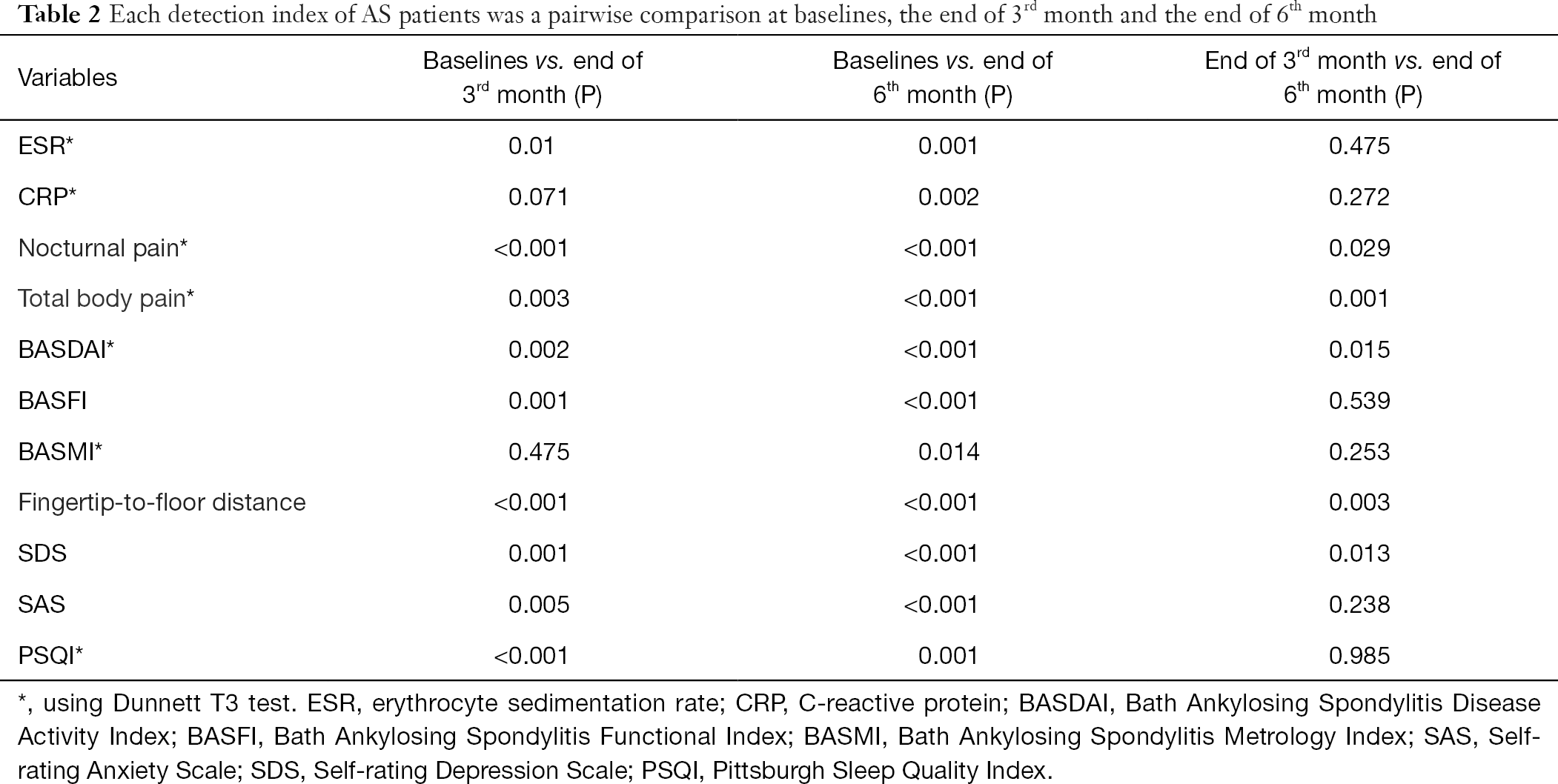 Table 2 Each detection index of AS patients was a pairwise comparison at baselines, the end of 3rd month and the end of 6th month
Full table

The numbers of AS patients accompanied by depression, anxiety, and sleep disorders were paired wise comparison at baselines, the end of 3rd month and the end of 6th month

Table 3 The number of AS patients accompanied by depression, anxiety, and sleep disorders were paired wise comparison at baselines, the end of 3rd month and the end of 6th month
Full table

There are few research reports on thalidomide for treating AS. This study is had further observation on efficacy and safety of thalidomide in patients with refractory AS physical, psychological symptoms and sleep disturbances (15). Studies have shown that thalidomide in the body by inhibiting the expression of TNF-mediated NF-κB and the expression of other genes regulated by NF-κB reduce the production of TNF-α, and TNF-α is an important cytokine involved in the inflammatory activity of AS (24). Small-scale clinical studies have shown that thalidomide is effective for a variety of rheumatic diseases, such as Systemic Juvenile Idiopathic Arthritis, skin manifestations of Systemic Lupus Erythematosus, Behcet’s Disease, Crohn’s disease, etc. Efficacy of thalidomide is poor in the treatment of rheumatoid arthritis (25-27).

The study has shown that patients with laboratory parameters ESR, CRP. somatic symptoms such as nocturnal pain, total back pain. BASDI, BASFI, BASMI, fingertip-to-floor distance were significantly improved compared with baseline. This is similar to our previous research results (15).

Thalidomide is originally used as one of non-barbiturate hypnotics and has a good improvement nighttime sleep function, to improve the role of anxiety and depression is partly attributed to the improvement of sleep disorders. Sleep problems are usually depression and anxiety of the main complaint. Early awakening is the core symptom of depression, and difficulty falling asleep is the main symptom of anxiety disorders (28-30).

Abedelmalek et al. (31) reported that their plasma of proinflammatory cytokines TNF-α and IL-1 would increase secretion after 30 healthy football players were partial sleep deprivation. On the contrary, by injecting exogenous TNF-α, IL-1, and IL-6, the subject appeared insomnia, drowsiness, fatigue, cognitive decline and other symptoms (20,32). In clinical practice, etanercept, infliximab, and adalimumab are used to treat patients with active inflammation and can improve resistance activity AS patients with anxiety, depression and sleep disorders (33-35). Kaster et al. (36) reported that TNF-α in mice induced depression-like symptoms, which could be completely blocked by thalidomide. In addition to TNF-α, IL-1 and IL-6 are also involved in the occurrence of sleep disorders, anxiety and depression (37), and thalidomide also can inhibit these pro-inflammatory cytokines (38). May be due to the above mechanism, after the application of thalidomide, active refractory AS accompanied by anxiety, depression and sleep disorders have been significantly improved. About security aspects of thalidomide, six patients withdrew from the study because of adverse events, the three patients had neuritis performance, such as extremity, lips numb or tingling fingertips and so on, and the remaining three cases appeared to be difficult to tolerating skin rash, drowsiness or dizziness.

Thirty-five consecutive patients with AS completed the study, 10 patients had no adverse reactions. In the study, we observed that the most tolerable common adverse reactions were drowsiness (10/35), dry mouth (8/35), constipation (8/35), dandruff (7/35), dizziness (4/35), skin rash (4/35), abdominal pain (3/35), decreased libido (1/35), hand tremors (1/35), memory decline (1/35), blurred vision (1/35), unresponsive (1/35), nausea and bloating (1/35) For solving the problem of drowsiness, we inform patients early to bed and early to rise, to drink a cup of coffee or tea after shower in order to improve daytime drowsiness. For solving the problem of constipation, in addition to told to eat food containing dietary fiber, to treat AS at the same time can be combined with total glucosides of Paeony which diarrhea is a common adverse reaction to improve constipation (39). One case of hand tremor in patients because of mild symptoms, the patient continued to use the Medication and hand tremor disappeared after a month.

In summary, refractory AS patients not only have somatic symptoms but are also accompanied by anxiety, depression, and sleep disorders. Thalidomide can improve effectiveness and safety in the treatment of physical, psychological symptoms and sleep disturbances accompanying refractory AS.

Funding: This project was supported by the Natural Science Foundation of Fujian Province, China (No. 2020J011077).

Conflicts of Interest: All authors have completed the ICMJE uniform disclosure form (available at http://dx.doi.org/10.21037/apm-19-409). The authors have no conflicts of interest to declare.

Ethical Statement: The authors are accountable for all aspects of the work in ensuring that questions related to the accuracy or integrity of any part of the work are appropriately investigated and resolved. The study was conducted safety and security in accordance with the United States Celgene Corporation formulated of thalidomide education and Prescription safety system (STEPS) standard. This study was approved by the ethics committee of Fujian Provincial Hospital (Approval ID: K-2018-10-014) and conducted in accordance with the Declaration of Helsinki (as revised in 2013). All the subjects included in this study have been informed in detail and signed the informed consent.