Prostate cancer (PCa) is one of the most emergent health issues globally, accounting for the second cause of cancer deaths in males (1,2). Recently, the incidence of PCa is increasing in numerous countries at pace with the steadily ceaseless development of society, especially the rapid expansion of the economy (3,4). Moreover, there has been evidence that the lifestyle and living environment of the public are two potential risk factors for PCa (5). Currently, PCa screening remains to rely on serum prostate-specific antigen (PSA) testing and random biopsy (6,7). However, the biopsy is an invasive test, which is not an appropriate screening. Meanwhile, PSA has low specificity, with false-positive results in patients with benign prostatic hyperplasia (BPH) and biopsy is only positive in around 25% of patients with PSA in the range between 2 and 10 µg/L. PSA screening and random biopsy strategies may induce that they diagnosed the other diseases and missing the PCa. The US Preventive Health Task Force issued a “D” grade for PSA-based screening in 2012 because they both over-diagnose low-risk disease and under diagnose high-risk cancers (8). Therefore, it is demanding to explore new biomarkers for the diagnosis and prognosis of PCa.

Epigenetic changes play a vital role in the development and progression of different cancers, including PCa. In particular, hypermethylation of CpG islands of the gene promoter region leads to reduced expression of gene (9). The original study has demonstrated that circulating tumor DNA (ctDNA) has the potential function for prediction, molecular analysis, and monitoring. Thus, ctDNA in the blood of tumor patients can be used as biomarkers (10). So far, circulating tum75 or DNA methylation as a biomarker of cancer has been used in the early detection of numerous cancers (11). Several studies have confirmed that abnormal methylations of serum EphA5, PITX3, PD-L1, DEFB1, PITX2, CRMP4 genes are involved in the malignant evolution of PCa, which can be used as a biomarker for assessing the risk of PCa (12-17). Accordingly, hypermethylation of the gene promoter may be a potential biomarker for the diagnosis of PCa.

The human DACT gene family contains three members, namely dact-1, dact-2, and dact-3, with 2, 1, and 5 CpG islands in the promoter region, respectively. Therefore, the presence of aberrant methylation of the DACT promoter may lead to a lower expression of mRNA, which in turn affects its normal biological function, including its role in the development of the tumor (18,19). Recent studies have shown that DACT-2 is down-regulated by its promoter methylation in various tumors, including colon cancer, gastric cancer, thyroid cancer, and esophageal cancer (20-23). It is hypothesized that DACT-2 may be a potential tumor suppressor gene involved in tumor progression. Our previous studies have also confirmed that DACT-2 is down-regulated by methylation in both prostate cancer cells and prostate cancer tissues (24). However, it is unclear whether the presence of DACT-2 gene methylation is present in the serum of patients with PCa. In this study we investigated the methylation status of DACT-2 promoter in serum of patients with PCa. We analyzed the relationship between the serum DACT-2 methylation and clinic pathological parameters in PCa for the better of the development of a novel and potential biomarker during diagnosis in PCa.

We present the following article in accordance with the STARD reporting checklist (available at http://dx.doi.org/10.21037/apm-20-1496).

Between January 2015 and December 2016, 135 participants, including 66 patients with PCa, 22 patients with benign prostatic hyperplasia and 47 healthy control, were consecutively enrolled in this prospective observational study conducted in the Affiliated Hospital of Xuzhou Medical University. The study was conducted in accordance with the Declaration of Helsinki (as revised in 2013) and was approved by the Ethics Committee of the Affiliated Hospital of Xuzhou Medical University (XYFY2019-KL113-01). Written informed consent was obtained from all participants.

Inclusion criteria of PCa were as follows: (I) male that was pathologically diagnosed with PCa were included in the PCa group; (II) male that was diagnosed with benign prostatic hyperplasia (BPH) were used color Doppler ultrasound examinations as benign group; (III) men with normal findings both at physical and color Doppler ultrasound examinations were included in the healthy group.

After color Doppler ultrasound examinations, blood samples were collected from patients with BPH and healthy controls, blood samples of patients with PCa were obtained daily before treatment, including radical prostatectomy, pre-operative chemotherapy, and radiotherapy. The pathological parameters, Gleason scores were taken from biopsies or prostatectomies. All samples were separated from serum and rapidly frozen at −80 °C. According to the 7th edition of the AJCC staging system, PCa patients were evaluated for the pathological stage. Clinical and biological data from the patients with PCa and BPH are listed in Table 1. 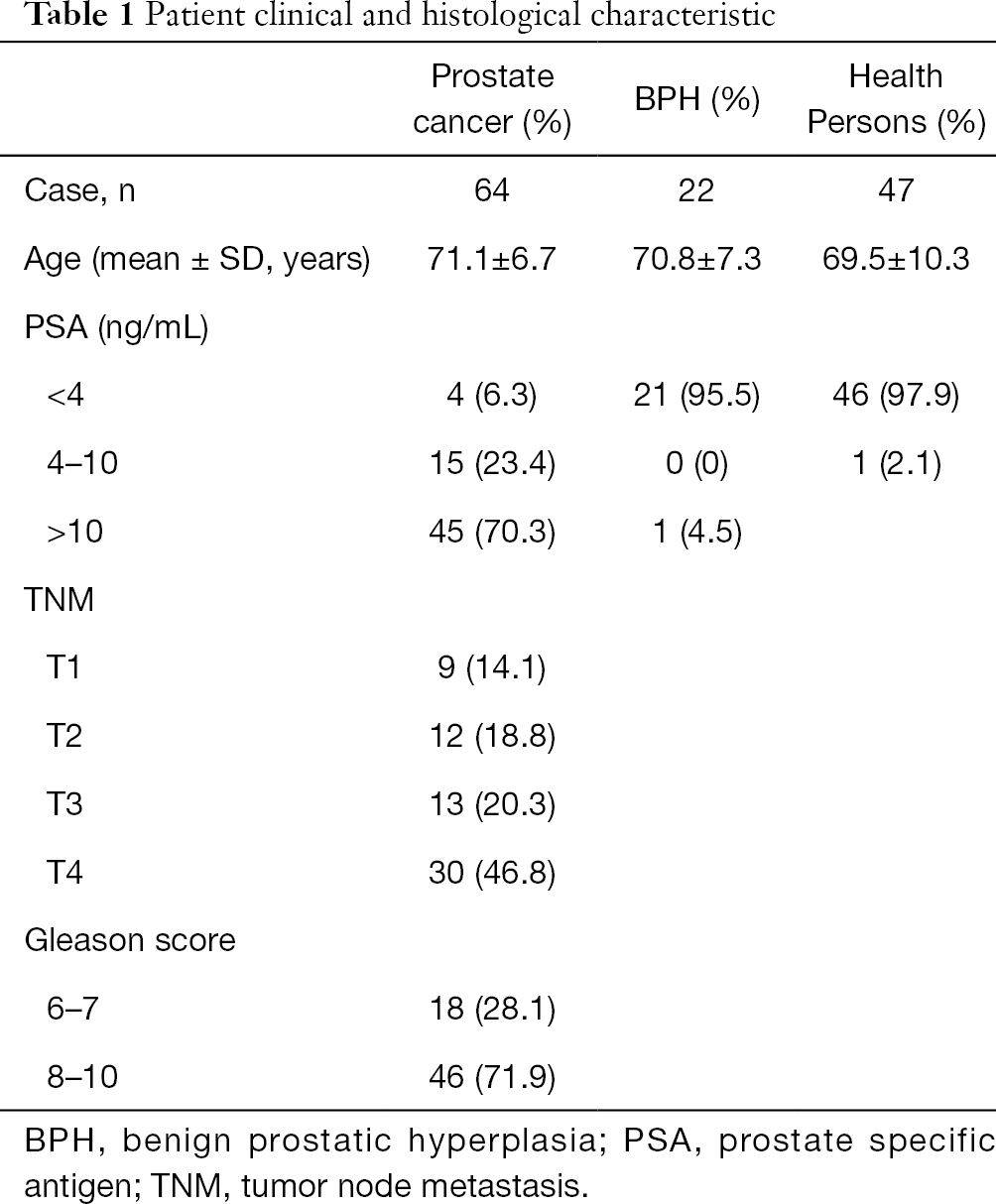 According to the manufacturer’s instructions, 200 µL of serum was used to extract DNA from each sample with the aid of Serum/Plasma Circulating DNA Kit (TIANGEN, Beijing, China). Then, the eluted 100 µL of serum DNA was stored at −20 °C for subsequent experiments. The extracted DNA was modified based on the operating manual for the EZ DNA Methylation-Gold Kit (ZYMO Research Co, Orange, CA) kit, and the modified DNA was stored at −20 °C.

The MSP primer sequences applied to amplify the modified DNA in this study were derived from the previous research (20). The sequences of MSP primers are as follows: 5'-GCGCGTGTAGATTTCGTTTTTCGC-3' (MF) and 5'-AACCCCACGAACGACGCCG-3' (MR); 5'-TTGGGGTGTGTG TAGATT TTG TTT TTTGT-3' (UF) and 5'-CCCAAACCCCACAAA CAA CAC CA-3' (UR). The MSP amplification system used in this experiment was 20 µL, consisting of 10 µL of Taq PCR MasterMix, 10 µL of nuclease-free water, 1 µL of each upstream and downstream primers and 1 µL of modified DNA. The amplification conditions involved in this reaction are as follows: 95 °C 5 min, (95 °C 30 s, 58 °C 30 s, 72 °C 30 s) ×38, 72 °C 7 min. The size of methylated and unmethylated products was about 152 and 161 bp, respectively, separated on a 3% agarose gel and visualized under UV illumination.

As above, the DNA of the serums of 47 healthy subjects, 22 prostatic hyperplasia subjects and 64 PCa subjects was extracted and subjected to bisulfite modification. The level of methylation of the DACT-2 promoter was examined on an ABI 7500 system (Applied Biosystems) using the MSP primers, and amplification conditions described above. The methylation level of the DACT-2 gene was calculated according to the following formula: M%= 100%× [number of copies of methylated DNA/(number of copies of methylated + unmethylated DNA)]. In this study, the levels of DACT-2 methylation rate at 0.745 were deﬁned as positive according to the ROC (receiver operating characteristic) curves. The levels of PSA >7.56 ng/mL were deﬁned as positive based on the reference range provided by the kit.

The experimental data were analyzed using SPSS 16.0 and GraphPad Prism 5.0 software. Differences between groups were compared by t-test. The differences between the three groups were assessed by the one-way ANOVA test and the relationship between DACT-2 methylation level and clinic pathological parameters was compared by the chi-square test. A receiver operating characteristic (ROC) curve was established to evaluate the diagnostic value of DACT-2 in PCa patients. When the P value is less than 0.05, the difference is considered statistically significant.

The methylation status of DACT-2 in serum 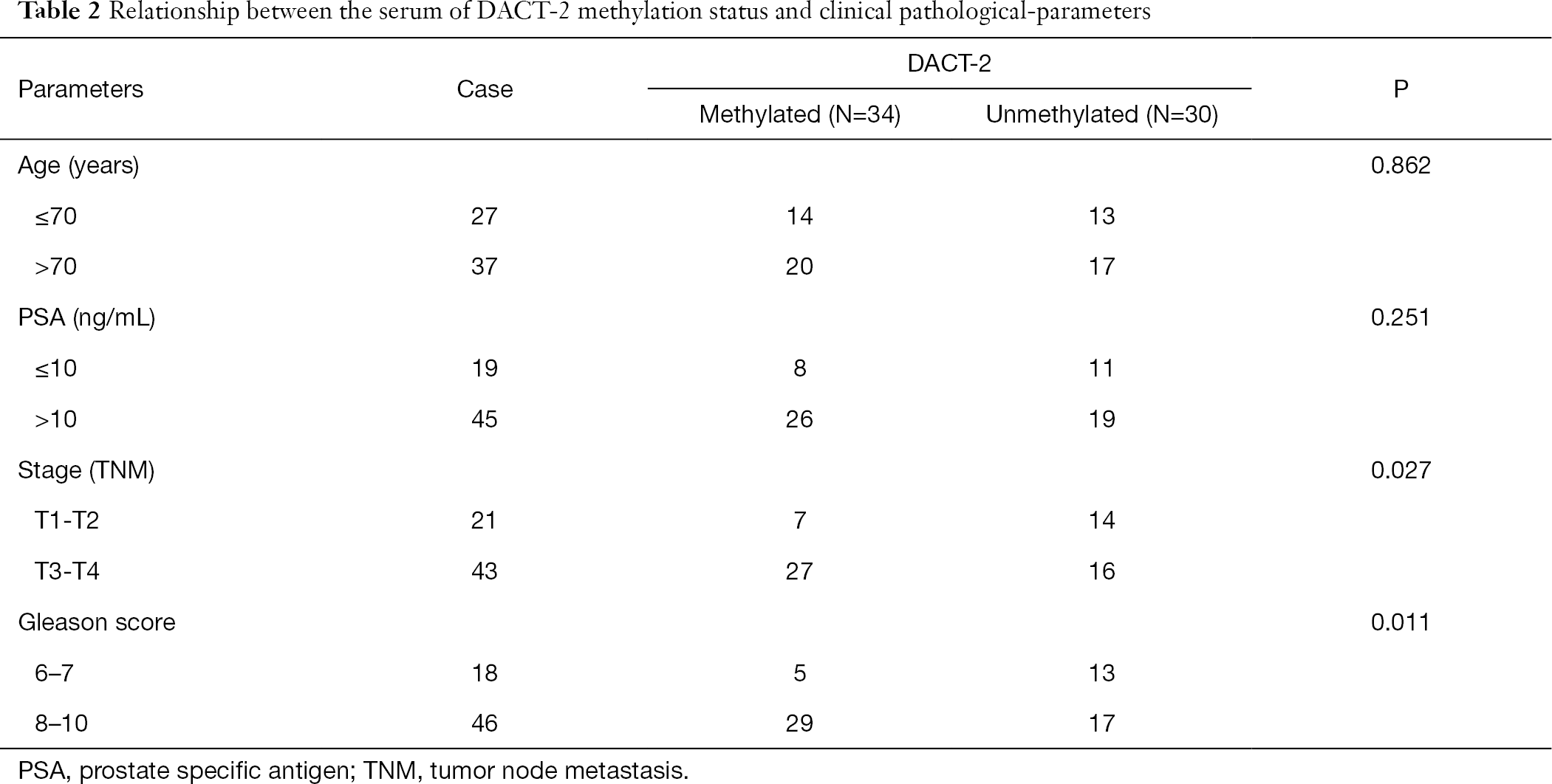 The rate of DACT-2 methylation in serum

Correlation between the methylation rate of DACT-2 and clinicopathologic features

Currently, the early diagnosis of PCa mainly relies on prostate-specific antigen PSA screening. Due to its low specificity for PCa, the detection of enhanced PSA levels not only results in the false positive diagnosis of PCa but also leads to a large number of unnecessary and invasive prostate biopsies (6,25). Therefore, it is reasonably critical to identify diagnostic biomarkers with high sensitivity, specificity, and non-invasion for early diagnosis, improvement of prognosis, and survival rate of patients with PCa.

Increasing evidence has shown that circulating tumor DNA (ctDNA) is a more appropriate and non-invasive liquid biopsy biomarker, which is easily detectable in a patient’s plasma at an early stage of the disease (26-28). In particular, tumor-specific DNA methylation can be reflected in the ctDNA of cancer patients, demonstrating its potential for widespread clinical application in cancer detection (29,30). Given this general idea, we mainly probed into the methylated expression of DACT-2 in patients with PCa. Results of MSP showed that compared with BPH and healthy subjects, the methylated DACT-2 was highly present in the serum of patients with PCa. The above results are consistent observed in prostate cancer cells and prostate cancer tissues. Also, the discovery of this study is accordant with previous findings regarding the performance of DACT-2 in other tumors, suggesting that DACT-2 exhibits highly methylated in a variety of tumors (20-23). Guo et al. have validated that the hypermethylation of DACT-2 effectively promoted the progression of esophageal cancer (23). Moreover, several other studies have demonstrated that methylated DACT-2 can contribute to the development of tumors, including colon cancer, thyroid cancer, and breast cancer (21,22,31). All the above findings validate that DNA methylation plays a crucial role in the carcinogenesis of tumors, so we further explored the clinical value of DACT-2 methylation in patients with PCa. Our analysis suggested that methylated DACT-2 was correlated with the Gleason score and TNM stage, and DACT-2 methylation expressed more frequently in high Gleason scores and patients with advanced PCa. Moreover, no correlation between the methylated DACT-2 and median age (P=0.862), preoperative PSA levels (P=0.251) was observed in prostate carcinoma samples. In conclusion, the above results indicated that DACT-2 might act as a tumor suppressor for PCa.

Our findings demonstrate that methylation of DACT-2 is involved in the evolution of PCa, which could potentially make DACT-2 a valuable biomarker for PCa diagnosis. The specific mechanism about how DACT-2 promotes the development of PCa needs to be further explored.

The authors want to recognize the cooperation of the patients, controls and investigators for their participation in this study, especially the staff of Medical Laboratory Section in Xuzhou Medical University Affiliated Hospital, China.

Funding: The study was supported by the grant from the Jiang Su Provincial Medical Youth Talent (No. QNRC2016781) and the Natural Science Foundation of China (No.81702061).

Reporting Checklist: The authors have completed the STARD reporting checklist. Available at http://dx.doi.org/10.21037/apm-20-1496

Conflicts of Interest: All authors have completed the ICMJE uniform disclosure form (available at http://dx.doi.org/10.21037/apm-20-1496). The authors have no conflicts of interest to declare.

Ethical Statement: The authors are accountable for all aspects of the work in ensuring that questions related to the accuracy or integrity of any part of the work are appropriately investigated and resolved. The study was conducted in accordance with the Declaration of Helsinki (as revised in 2013) and was approved the Ethics Committee of the Affiliated Hospital of Xuzhou Medical University (XYFY2019-KL113-01). Written informed consent was taken from all the patients.