In recent years, the embryonic origin of bone cells has been demonstrated to confer the potential for systemic extra-skeletal effects on bone (7,8). Bone is currently recognized as an endocrine organ (7,8), and bone cells produce osteocalcin (OC), FGF23, and sclerostin (Sost) (7,8). In end-stage renal disease (ESRD), CKD-MBD contributes to cardiovascular events and poor outcomes (1,7,8). CKD-MBD has become an urgent global public health issue (9). Thus, recognizing the specific types of renal osteodystrophy is of increasing importance (1,2,7,8). Despite transiliac bone biopsy being reliable for observing histomorphometric changes and cellular activity in bone tissue (10-12), it is not routinely used for inspection in clinical practice. Laboratory biomarkers are being continuously developed and can provide relatively accurate information (1,2,3,8,13,14). Chronic inflammation has increasingly been recognized as a feature of CKD (8), and a link between inflammation and bone has also been established (15). During the process of bone injury repair, bone cells and inflammatory cells are both recruited, resulting in intense crosstalk (15). Chronic inflammation can also affect the activity of bone cells (8).

Alkaline phosphatases (ALP) are responsible for removing phosphate (P), which is involved not only in bone mineralization but also in vascular calcification (1,2,14). ALP is involved in cross-talk between bone and vessels (2,14). In CKD, total ALP is generally regarded as a reliable marker of bone turnover (1,2,14). An association between serum ALP and elevated serum C-reactive protein (CRP) levels has been reported in CKD patients (16) and nor-CKD population (17,18). Although various studies of the biomarkers of CKD-MBD have been performed in ESRD patients, a majority of the previous studies involved patients undergoing dialysis. The conventional dialysate is phosphorus free and a relatively high-calcium caution resolution.

Dialysis can effectively improve disorders of calcium and phosphorus metabolism (1). CKD-MBD is an intricate network (1,2). A change to one component could potentially affect the whole network. Dialysis patients may not be the ideal subjects for presenting the natural course of CKD-MBD in patients ESRD. The present study was performed to address the current lack of relevant research on this topic. Therefore, with ESRD patients who were yet to initiate dialysis and CKD-MBD–targeted treatment selected as the study subjects, we aimed to evaluate the CKD-MBD biomarkers and inflammation indexes, and to examine the associations of serum ALP levels with serum CRP levels and leukocyte counts in these patients. We present the following article in accordance with the STROBE reporting checklist (available at http://dx.doi.org/10.21037/apm-20-2083).

Before starting the present study, we submitted our study protocol for ethical approval. The study was approved by Ethics Committee The First Affiliated Hospital of Xiamen University (2020033). The study was conducted in strict accordance with the Declaration of Helsinki of the World Medical Association (as revise in 2013). Need for written informed consent from the patients also has been waived by hospital ethics committee.

ESRD patients who were yet to initiate dialysis were selected as our study subjects. All CKD patients who were discharged from our hospital between January 1, 2013, and December 31, 2017, were screened. For inclusion in the study, subjects needed to meet all of the following criteria: (I) diagnosed with ESRD, which was defined as eGFR <15 mL/min/1.73 m2 and renal disease >90 days; (II) not yet on dialysis; (III) had not received targeted treatment for CKD-MBD, including phosphorus binders, vitamin D3, calcitriol, calcitriol analogue, and calcium mimetic (1). Patients with missing data on CKD-MBD biomarkers were excluded from the study.

The patients’ medical records were retrospectively reviewed. Patient demographic information, medical history, and laboratory data were obtained. The average value of three blood pressure measurements taken after admission was calculated and used as blood pressure. Infection was defined as a diagnosis of infection indicated in the medical records and treated with antibiotics.

According to quartiles of serum ALP, all subjects were categorized into four subgroups: ALP Q1: 0–25%, Q2: 25–50%, Q3: 50–75% and Q4 >75%. The clinical characteristics of the four subgroups are presented in a table. Differences in multiple sets of data were compared by one-way analysis of variance or the Kolmogorov–Smirnov test according to the characteristics of the variables. A Bonferroni test was used for multiple comparisons. The chi-square test was used to compare categorical variables. CRP, ALP, and PTH had skewed distribution in the CKD groups. CRP, ALP, and PTH were logarithmically transformed and then analyzed. Coefficients between log-transformed ALP and log-transformed PTH, log-transformed CRP, leukocyte count. and ferritin were analyzed using Pearson’s correlation analysis. The models were adjusted for age, sex, body mass index (BMI), smoking, systolic blood pressure, and infection. A two-tailed P value <0.05 was considered to be statistically significant.

The prevalence of hypocalcemia, hyperphosphatemia, elevated iPTH level, and elevated CRP level were calculated in all subjects and four subgroups.

All CKD patients who were discharged from our hospital between January 1, 2013, and December 31, 2017, were screened. Based on the inclusion criteria and exclusion criteria, 256 patients with ESRD were included in our study.

The detailed clinical data of 256 ESRD patients are displayed in Table 1. The patients had an average age of 56 years; 162 were male and 94 were female. As excepted, the ESRD patients had a lower level of total serum calcium, and a higher level of serum phosphorus and iPTH. The median serum ALP level was 78.15 (25%: 61.35, 75%: 102). The inflammation indexes and the levels of CRP and ferritin were also elevated. 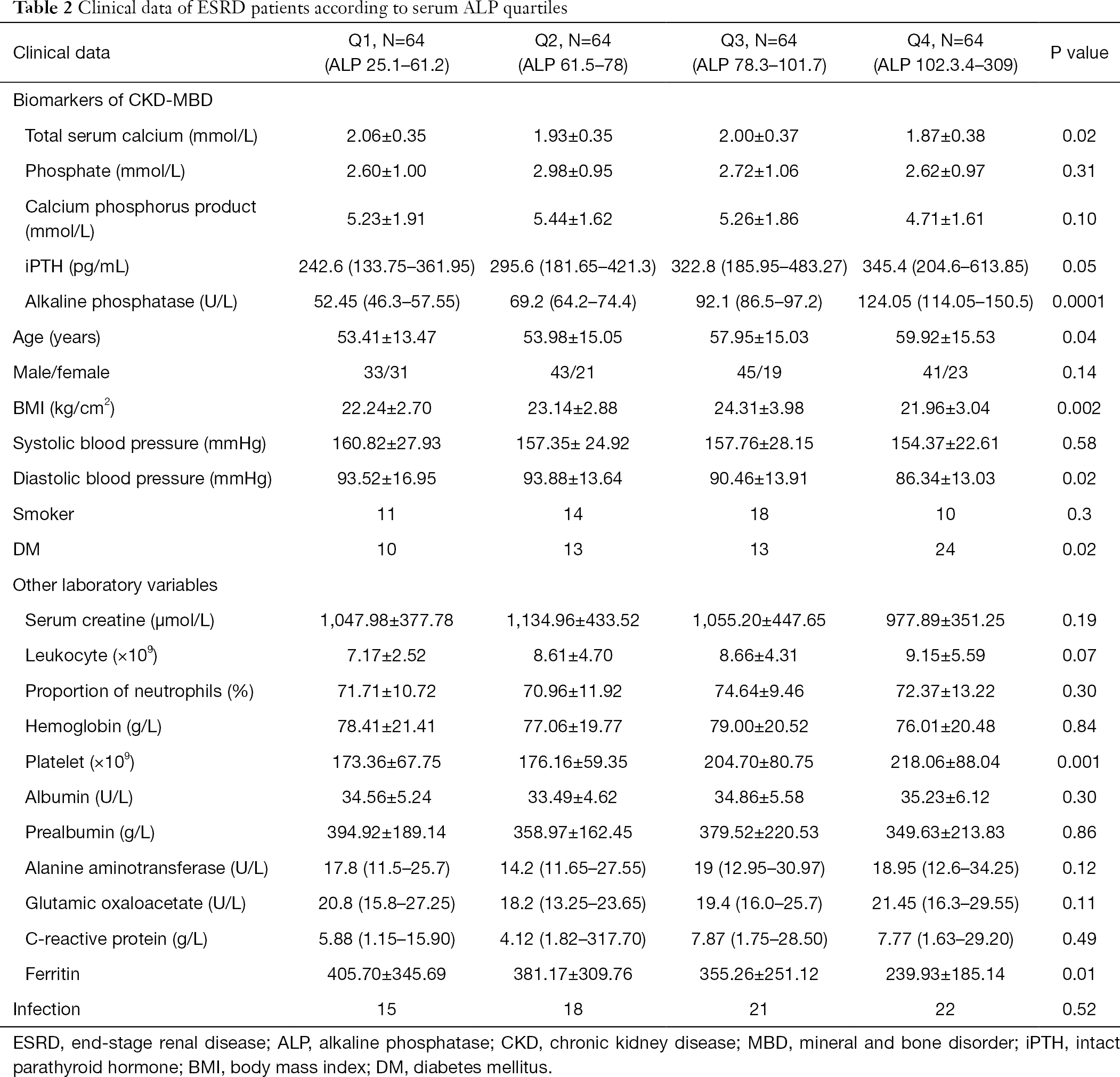 In our study, we investigated CKD-MBD biomarkers and inflammatory indexes in ESRD patients who were yet to initiate dialysis. Unsurprisingly, hypocalcemia, hyperphosphatemia, and increased PTH and CRP were extremely common in ESRD patients. However, only 24 of the patients in our study were found to have an elevated ALP (>135 U/L). Discrepancies between serum ALP and iPTH were only recorded in 29 patients. After adjusting for age, sex, BMI, smoking, systolic blood pressure, and infection, serum ALP level was found to be associated with the level of iPTH and serum CRP level, and leukocyte count.

A number of studies have clarified that CKD attribute to bone and mineral disorders (1,2). As renal failure progresses (CKD stage 3–4), the first change is typically early and progressive FGF23 elevation (2,3). Then, calcitriol declines and parathyroid hormone increases to maintain phosphate levels within the normal range (2,3). Usually, 70–80% of daily dietary phosphate intake is excreted in urine (2,22). With further development of renal failure, eGFR decreases to <30 mL/min/1.73 m2, and the level of phosphorus in the blood gradually increases (2). Data from the Dialysis Outcomes and Practice Patterns Study (DOPPS) for China (23) showed that severe hyperphosphatemia (>7 mg/dL) and secondary hyperparathyroidism (>600 pg/mL) were common (27% and 21%, respectively) in patients undergoing hemodialysis. Decreased serum calcium levels (<8.4 mg/dL) were found in 25% patients on hemodialysis (21). Compared to other DOPPS regions [2012–2015], patients in these 45 Chinese dialysis units had a higher level PTH and phosphate (21). Unlike previous studies, our study focused on untreated CKD-MBD patients who had not yet received dialysis treatment. Symptoms of kidney diseases may be concealed. With the adaptation of chronic diseases, patients may ignore some symptoms, which may lead to a delay in the diagnosis of uremia. Even in the DOPPS study (23), CKD-MBD biomarkers were measured less frequently in China than in other DOPPS regions, with only 14.9% of Chinese patients undergoing frequent measurement for calcium and PTH (23). Phosphate binders were prescribed in 59% of Chinese patients (23). The data indicated that progress needed to be made in the management of CKD-MBD. So, in the retrospective study, we noted a certain number of patients who had not received targeted treatment for CKD-MBD before undergoing hemodialysis. Since the completion of the DOPPS5 study, progress has been made with CKD-MBD management in China (23), and we have reason to believe that the diagnosis and treatment of CKD-MBD can be further improved.

Transiliac bone biopsy is the gold standard for the diagnosis of renal osteopathy (1-3). However, it is not widely developed, and more often, biomarkers are used to assess bone turnover (1-3). Parathyroid hormone plays an important role in the regulation of bone turnover. However, the detection methods of iPTH are not accurate enough (24,25). In the previous study (25), 10 detection methods were used to determine iPTH. The results of these different detection methods varied (25). In research on the relationship between iPTH and mortality in CKD patients, the optimal value of PTH recommended in different studies has also ranged widely (26). In view of this, the KDIGO guidelines recommend that the appropriate PTH value for dialysis patients is 2–9 times the normal value (26).

Total ALP is generally regarded as a reliable biomarker of bone turnover in CKD (1,14,21). Circulating ALP is an independent predictor of all-cause mortality in the general population (27) as well as in CKD patients (28,29). ALP is also involved in vascular calcification (30) and is a superior biomarker to iPTH for bone turnover in CKD patients (14,21). The results of our study showed that an elevated iPTH was extremely common in ESRD patients who had not initiated dialysis. However, the median level of iPTH was lower than that in DOPPS [2012–2015] in China (23). Compared to the data on patients undergoing hemodialysis, we consider that hypocalcemia and hyperphosphatemia can be effectively corrected by dialysis and drug therapy; parathyroidism, however, is more difficult to deal with. Moreover, almost half of patients in the group had a relatively high level of ALP (>80 U/L). A combination of ALP and iPTH is an effective tool for predicting bone turnover (14,21,24). Discrepancies between serum iPTH and BSAP levels may be found in CKD patients (21,24). One explanation for this is the variability in the measurements of ALP and iPTH (21,24). Increased serum iPTH levels with low ALP may reflect skeletal resistance or decreased calcemic response to PTH (19,30-33). In our study, only three patients had elevated iPTH (>200 pg/mL) with a low level of ALP (<35 U/L).

Total ALP includes tissue and non-tissue specific alkaline (TNAP). TNAPs are present in several tissues, including the liver, the kidney, and bone (21); those found in the bone are referred to as bone-specific APs (BSAPs) (19). BSAPs are a very specific bone formation marker. Although ALP is regarded as a reliable marker of bone turnover in CKD (1,14,21), elevated ALP level can also be caused by liver damage. Moreover, intestinal AP may also be increased in hemodialysis patients. BSAPs are also more sensitive and specific for bone disease. In our study, ALP was used as the biomarker of CKD-MBD rather than BSAPs, which is a limitation of our study. Other limitations include our study’s retrospective nature.

As expected, hypocalcemia, hyperphosphatemia, and increased PTH and CRP levels were extremely common in the ESRD patients in our study. Discrepancies between serum ALP and iPTH were also found these patients. Our results also indicate that serum ALP level is associated with the levels of iPTH and CRP, as well as leukocyte count.

Reporting Checklist: The authors have completed the STROBE reporting checklist. Available at http://dx.doi.org/10.21037/apm-20-2083

Conflicts of Interest: All authors have completed the ICMJE uniform disclosure form (available at http://dx.doi.org/10.21037/apm-20-2083). The authors have no conflicts of interest to declare.

Ethical Statement: The authors are accountable for all aspects of the work in ensuring that questions related to the accuracy or integrity of any part of the work are appropriately investigated and resolved. The study was approved by Ethics Committee The First Affiliated Hospital of Xiamen University (2020033). The study was conducted in strict accordance with the Declaration of Helsinki of the World Medical Association (as revise in 2013). Need for written informed consent from the patients also has been waived by hospital ethics committee.