Osteoarthritis (OA) is a heterogeneous disease caused by the pathological changes of the synovial joint. About 10–12% of adults suffer from symptomatic OA (1,2). Therefore, it affects many individuals and throws a heavy burden on the medical system. OA is included in the category of “Bone Bi” in traditional Chinese medicine (TCM). The pathogenesis is complicated, the disease evolves rapidly, and multiple pathologies are interchangeable. Due to the inconsistent understanding of Bone Bi syndrome’s pathogenesis, there is a significant difference in the differentiation of syndromes among different medicines. In recent years, scholars have begun to study the essence of “syndrome” from the perspective of genes and proteomics (3). Proteomics theory has gradually been used to diagnose, treat, and research various diseases and syndromes in Chinese medicine (3-8). The substantial material basis research of “syndrome” with proteomics as the starting point has highlighted its advantages in modernizing TCM (9).

Synovial fluid (SF) is the capillary exudate present in the joint chamber. Proteins in SF also comes from surrounding tissues, articular cartilage, synovium, and bone (10). SF directly contacts the affected tissues, cartilage, synovial tissue, and bones, which will become a source of high-quality biomarkers (11). In earlier studies, many substances have been found in synovial fluid, including cytokines, chemokines (12), molecules (13), and proteins (14). SF analysis is a crucial way to understand OA (15). The quantitative proteomics method of isobaric tags for relative and absolute quantitation iTRAQ was initially reported by Ross et al. (16). This method can identify and quantify proteins from many samples simultaneously while retaining the critical posttranslational modification information. This study used iTRAQ technology to compare the protein in the synovial fluid between patients with knee OA and knee traumatic synovitis to obtain the relative and absolute content of histones in different joint synovial fluids, hoping to find the difference of protein expression. We present the following article in accordance with the MDAR reporting checklist (available at http://dx.doi.org/10.21037/apm-20-2117).

From January 1, 2011, to January 31, 2013, according to the OA diagnostic criteria established by the American Academy of Rheumatology and the TCM syndrome criteria of Zhonggu Bi in the Chinese Medicine Industry of the People’s Republic of China, “Diagnosis and Curative Effect Standards of TCM Diseases and Syndromes” (94 edition), patients aged 40–65 years old with knee OA stage I–II (according to Kellgren-Lawrence Staging) were enrolled. Knee OA with different TCM Classification of each patient was confirmed by a specialist team (consisting of 2 professors and 2 chief doctors) according to criteria mentioned previously. At the final analysis, 15 patients have enrolled: 5 patients with kidney deficiency, 5 patients with Yang deficiency, 5 patients with blood stasis. Another 5 patients with synovitis were enrolled as the control group. All subjects were excluded from diseases, including severe liver and kidney function, hematopoietic system disorders, hypertension, cardiopulmonary dysfunction, tumors, tuberculosis, infectious diseases, and acute severe injuries. All procedures performed in this study involving human participants were in accordance with the Declaration of Helsinki (as revised in 2013). The study was approved by ethics committee of The First Affiliated Hospital of Guizhou University of Traditional Chinese Medicine. All subjects were informed and signed an informed consent form before oral treatment with Chinese medicine and joint fluid acquisition.

The synovial fluids of different types of OA of kidney deficiency, yang deficiency, and blood stasis before treatment were drawn into the Aa group, Ba group, and Ca group. The synovial fluids were acquired as described before (12). After two weeks of medication, the three joint fluid types were drawn again as the Ab group, Bb group, and Cb group, the untreated control group’s joint fluid, drawn as the D group. The amount of synovial fluid in 35 samples was about 2 to 4 mL. The samples were frozen and stored in a refrigerator at −80 °C. Use iTRAQ analysis to analyze the samples (Shanghai Shanghai Zhongke New Life Biotechnology Co. coordinates iTRAQ analysis, Ltd., China).

Using SPSS 20.0 statistical software for statistical processing. Quantitative data were expressed as mean ± standard deviation, and the F test performed a comparison between groups. P<0.05 indicates that the difference is statistically significant.

See Table 1 for the quantitative results of protein analyzed by iTRAQ. The comparison showed statistical differences between each group at different time points (P<0.05). The protein electrophoresis has similar results (Figure 1).

We used a frequency distribution histogram to analyze iTRAQ quantitative data. The ratio of each group of labels to the reference label is Log2 logarithm, the group distance is set to 0.1, and the distribution range is −2.0 to 2.0. Excel draws Figure 2. Figure 2Aa/D and 2Ba/D are typically distributed and similar, and the ratio between the two sets of samples and the reference (2Aa/D and 2Ba/D) is used for Pearson correlation analysis, as shown in the scatter diagram 3. The points in the figure are close to a straight line, suggesting that there is a correlation. 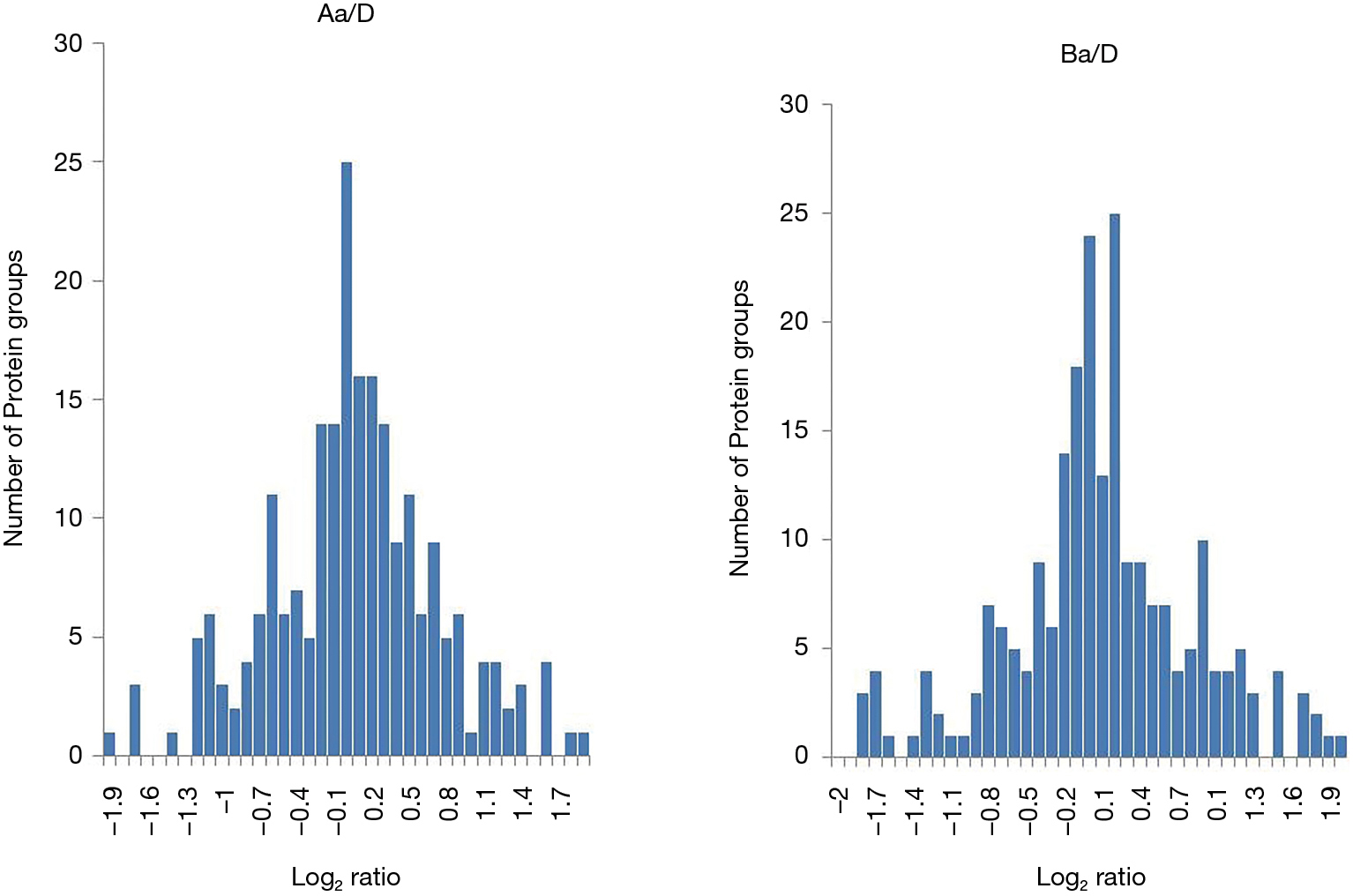 Figure 2 iTRAQ quantitative data analysis. The ordinate is the protein number, and the abscissa is the Log2 logarithm of the two sets of samples and the internal reference value.

The iTRAQ technology uses 4 or 8 isotopic labels to label the amino groups of polypeptides specifically and then performs tandem mass spectrometry analysis to compare the relative or absolute content of proteins in 4 or 8 different samples simultaneously. Many scholars have used it to find the differentially expressed proteins of some diseases (17-21). In this experiment, we used iTRAQ technology to investigate OA patients and found 32 proteins with significant differences.

Analysis of the difference between OA and traumatic synovitis proteome

This study found that lactoferrin and prefibrin-1 were significantly reduced in the Aa and Ba groups compared with the control group hemoglobin α1 was significantly increased. According to Figures 2 and 3, the two groups A and B, have a positive correlation. Both lactoferrin and prefibrin-1 have a specific effect on the structure of bone cells. TCM believes that kidney yin deficiency mainly causes kidney deficiency, while kidney yang deficiency mainly causes yang deficiency, and both are dysfunction of the kidney, and there is a view that yang damages yin and yin damages yang. The two types have common points in symptoms and genes (22). In the treatment of OA, both kidney yin and kidney yang can be cured. Therefore, although both kidney and yang deficiency can find their different proteins, there is a clear correlation between these two types. 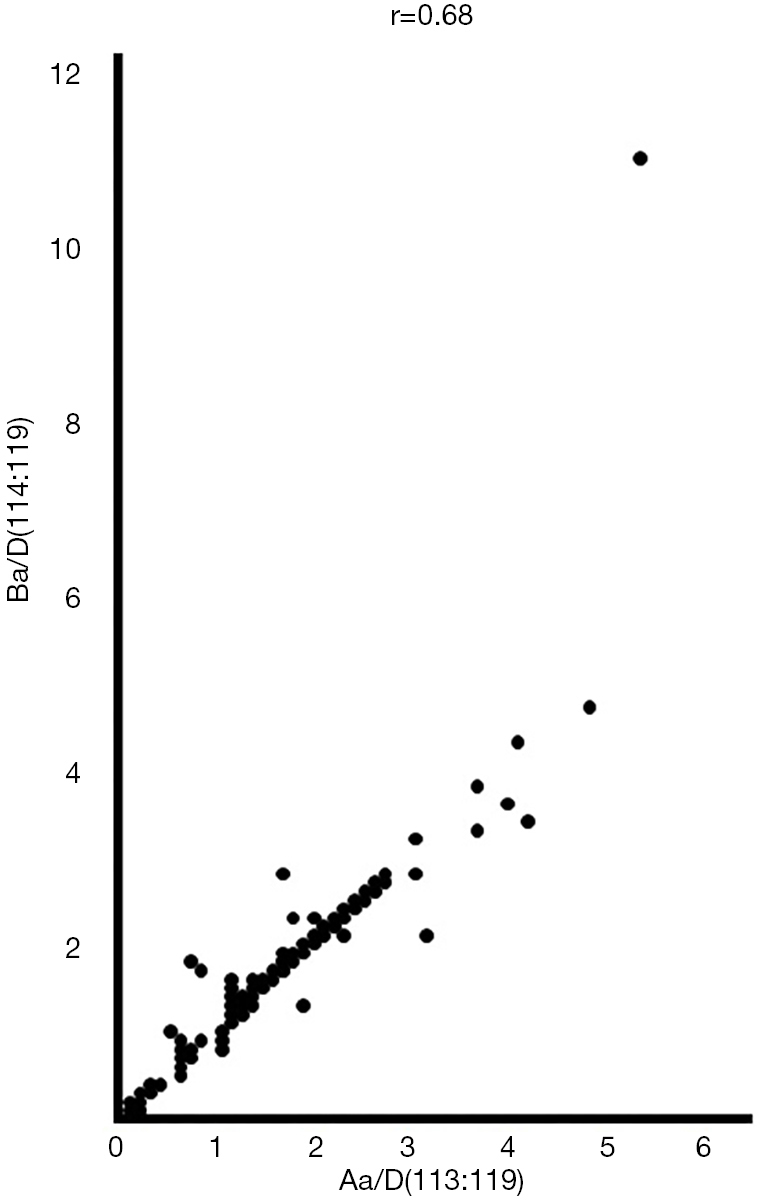 In general, through the analysis of this study, it is concluded that the synovial fluid in OA with kidney deficiency, Yang deficiency n has a significant protein correlation, which further confirms that kidney yang deficiency is related to kidney yin deficiency, which is supportive for further research on the theory of kidney deficiency syndrome. It is also concluded histone H4, histone H2A, S100 calcium-binding protein A8, fibrinogen γ, fibrinogen α, cDNA (FLJ92148), C4b binding protein, and partial transketol and basement membrane glycan may be used as markers to identify OA. HIST1H2BC and myeloperoxidase may be differential proteins that distinguish kidney-deficiency OA from the other two types. Serum amyloid P protein and apolipoprotein CI variants may be differential proteins of yang deficiency. Histone H2A, C-reactive protein, and fibrinogen α may be differential proteins of blood stasis type. The protein differences between the three types of OA syndromes of different TCM types provide a material basis for TCM clinical types and provide theoretical support for the subsequent treatment stage.

However, there are still many limitations to this study. Since some patients have no synovitis changes or, there is very little synovial fluid. It is not easy to get for the test. Secondly, the sample size is small, which decreases the credibility of this study. Future studies should enroll more patients to confirm our findings.

Funding: This study was supported by The National Natural Science Fund of China (No.81860855) and the Funding for scientific research on traditional Chinese medicine and Ethnomedicine of Guizhou provincial Administration of traditional Chinese Medicine (No.QZYY2010-19).

Reporting Checklist: The authors have completed the MDAR reporting checklist. Available at http://dx.doi.org/10.21037/apm-20-2117

Conflicts of Interest: All authors have completed the ICMJE uniform disclosure form (available at http://dx.doi.org/10.21037/apm-20-2117). The authors have no conflicts of interest to declare.

Ethical Statement: The authors are accountable for all aspects of the work in ensuring that questions related to the accuracy or integrity of any part of the work are appropriately investigated and resolved. All procedures performed in this study involving human participants were in accordance with the Declaration of Helsinki (as revised in 2013). The study was approved by ethics committee of The First Affiliated Hospital of Guizhou University of Traditional Chinese Medicine. All subjects were informed and signed an informed consent.