A comparison of the safety and efficacy of polyethylene glycol 4000 and lactulose for the treatment of constipation in pregnant women: a randomized controlled clinical study

Constipation is a common gastrointestinal complication during pregnancy. The prevalence of constipation is higher in pregnant women compared to the general population, particularly due to the physiological changes that occur throughout pregnancy. Constipation reportedly affects between 2.6% and 24.8% of Asians (1) and 40% of pregnant women (2). The prevalence and severity of constipation also varies depending on the stage of the pregnancy. The occurrence of constipation in early pregnancy is brought on by hormonal factors and mechanical changes related to pregnancy progression. Previous studies have shown that female sex hormones affect gastrointestinal motility in non-pregnant women (3). For instance, progesterone and somatostatin may inhibit the release of motilin, a peptide hormone that stimulates gastrointestinal motility (4). Also, relaxant is a polypeptide that prevents smooth muscle contraction during pregnancy, and also inhibits smooth muscle activity in the gastrointestinal tract (5). Moreover, estrogen and progesterone induce increased secretion of renin, which converts angiotensinogen into angiotensin-I. This is then converted into angiotensin-II by the angiotensin converting enzyme (ACE), which ultimately leads to increased levels of aldosterone during pregnancy. Comprehensive studies on colon perfusion have shown that aldosterone increases water absorption during pregnancy, especially in the second trimester (2).

If the short-term symptoms of constipation are not relieved through lifestyle adjustment, laxatives can be prescribed as appropriate. Laxatives may help to reduce the occurrence of constipation, avoid premature birth, and prevent intestinal obstruction, hemorrhoids, and other anorectal diseases, thus improving quality of life. The efficacy, safety, drug dependence, and potency ratio should be considered when prescribing laxatives. Due to the particularity of pregnancy and breastfeeding, the choice of laxatives in pregnant women should be based on ensuring the safety of the mother and the fetus (7,8). The ideal laxative should exhibit good curative effect and tolerability, and should not be absorbed into the blood (no teratogenic effect) or transferred into breast milk.

Lactulose is an artificially synthesized disaccharide, and belongs to a class of medications known as osmotic laxatives. In China, lactulose is commonly prescribed to treat constipation during pregnancy and in the postpartum period. The United States Food and Drug Administration (FDA) has also approved it for this purpose. Lactulose is a prebiotic, recognized by the World Gastroenterology Organization (WGO), and is thus not digested in the small intestine. In the colon, it causes an osmotic gradient, and under the action of osmotic pressure, promotes softening of the stool, thereby making it easier to pass. Lactulose can also increase the number of intestinal probiotics such as Lactobacillus and Bifidobacterium, reduce the number of anaerobic bacteria, and regulate the micro-ecological balance of the intestinal tract (9). Through the action of bacteria in the colon, lactulose can be converted into acetic acid and lactic acid, resulting in an increase in colonic acidity and the promotion of peristalsis, ultimately assisting in the excretion of feces (9).

Lactulose can significantly improve average stool characteristics and there are no serious adverse reactions following treatment. Furthermore, treatment efficiency and satisfaction rates are high (10-12) Lactulose is also used postpartum, and significantly improves bowel motility, stool characteristics, and shortens hospitalization time. Applied to patients with postpartum perineal lacerations, it significantly improves first bowel movement pain and also shortens hospitalization time (13,14). In terms of safety, since lactulose is not absorbed into the blood, it will not cause blood sugar fluctuations and does not affect nutrient absorption, fetal development, or breastfeeding (15).

To our knowledge, there have been no randomized clinical trials comparing polyethylene glycol and lactulose for the treatment of constipation during pregnancy. Therefore, considering the higher incidence of constipation among pregnant women and the serious potential complications, as well as the existing evidence about the effect of osmotic laxatives on the human digestive system, this controlled randomized clinical trial was performed. We present the following article in accordance with the CONSORT reporting checklist (available at http://dx.doi.org/10.21037/apm-20-1674).

Based on the Rome IV diagnostic criteria for chronic functional constipation (18), we selected a total of 113 pregnant women with constipation who were admitted to the Department of Gastroenterology at the Affiliated Hospital of Jiangnan University from May 1, 2017 to April 30, 2020. Renumber the medical record number in sequence, and the patients were divided into two groups using the random number sequence method. Of the initial cohort of 113 patients, 57 were included in the observation group, and were administered polyethylene glycol 4000 (manufactured by Beau four Ipsen Industry, France, national medicine standard: H20130145) 10 g, twice daily (taken orally). The remaining 56 patients were included in the control group, and were administered lactulose (manufactured by Abbott Biologicals BV, Netherlands, national medicine standard) Word: H20120387) 15 mL, twice daily (taken orally). Patients were given a 3-week course of treatment and were observed for any adverse drug reactions. The clinical effects were compared every week during the 3-week treatment.

There were no statistically significant differences in the general clinical data of patients, including average age, weight, average course of disease, and severity of illness (P>0.05). None of the enrolled patients suffered from any of the following conditions: severe heart or liver disease, renal dysfunction, cerebrovascular disease caused by paralysis, bedridden, severe endocrine or metabolic disease, colon or rectal cancer, secondary constipation caused by drug-related factors, or allergy to therapeutic drugs. Informed consent was obtained from all patients

This study was conducted in accordance with the ethical principles of the World Medical Association’s Declaration of Helsinki (as revised in 2013) and was approved by the ethics committee of the Affiliated Hospital of Jiangnan University [(2017) KY068].

The Wexner constipation scoring system was used to assess the extent of constipation, including (but not limited to) the number and difficulty of bowel movements, degree of emptying, pain, defecation time, assisted defecation, number of defecation failures, and duration of disease. Patients were scored between 0 and 30 points, with a higher score indicating a more serious condition. Moreover, using the Bristol Stool Form Scale (BSFS), patients were given a stool trait score between 1 and 7 to classify their stool form. According to the scale, a score of 1 denotes a stool that is separate hard lumps, indicating severe constipation, while a score of 7 signifies a stool with a liquid consistency and no solid pieces, indicating severe diarrhea. Adverse reactions in the two groups were recorded, including abdominal pain, diarrhea, allergies, and vomiting.

Data were entered into a spreadsheet (Excel; Microsoft China Co., Ltd., Beijing, China) and SPSS was used for data analysis (V.22.0; SPSS Inc., Chicago, IL, USA). Counting data was compared using the Chi-square (χ2) test. Measurement data is shown by µ±s. An independent t test was performed for comparison between the groups, and a paired t-test was used for intra-group comparison. The Wilcoxon rank-sum test was used to compare the scores of the constipation assessment scale. The data are expressed as mean ± quartile deviation in box plots and whisker plots. A P value <0.05 was considered statistically significant.

Following the 3-week course of treatment, the two groups were compared. We found that both polyethylene glycol and lactulose were effective in the treatment of constipation (P<0.05), and there were no significant differences in the total effective rate between the two groups (P>0.05). However, following our analysis of the scores in the first and second weeks of treatment, we found that the polyethylene glycol group had a faster therapeutic effect (P=0.06, P=0.029, Table 2).

According to the BSFS scores, both groups were effective (P<0.05) and there was no significant difference in the total effective rate between the groups (P>0.05, Table 2, Figures 1,2). 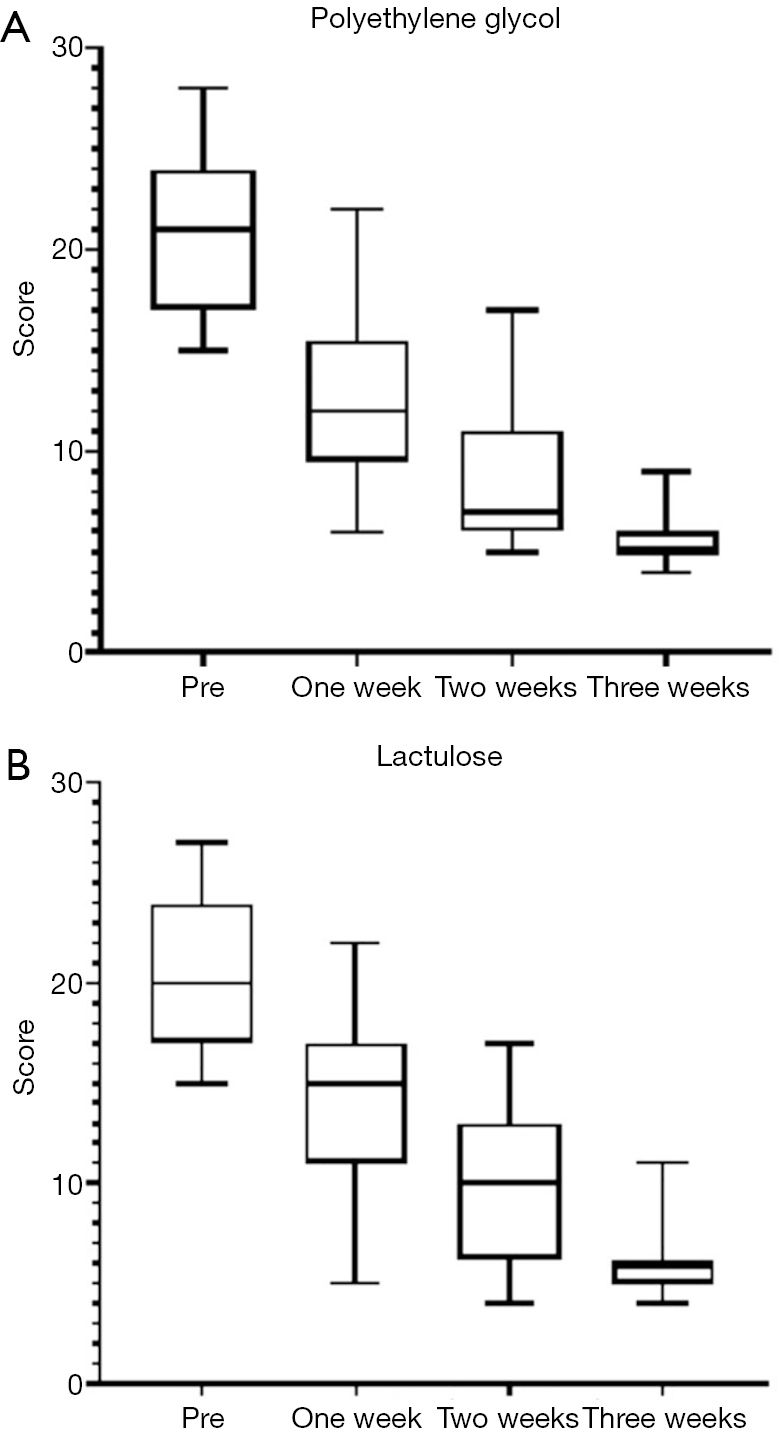 Figure 1 Wexner scores before and after treatment. 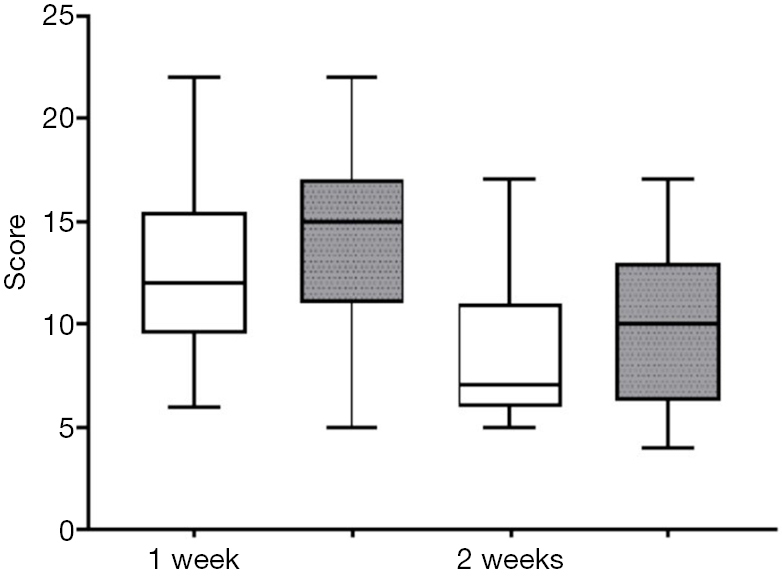 Figure 2 Comparison of Polyethylene glycol and Lactulose scores between the two groups (after 1 week and after 2 weeks).

Owing to the particular physiology of pregnancy, the incidence of constipation in pregnant women is higher compared to the general population, and there are fewer therapeutic drugs to choose from. Generally, as the gestational age of the pregnancy increases, so do the levels of progesterone, resulting in slower gastrointestinal peristalsis and weakened tension. This is coupled with the increased pressure of the uterus on the gastrointestinal tract, and the reduced peristaltic function of the rectum. These changes are not conducive to the movement of stool to the anus, and thus, the stool remains in the rectum for an extended period. Furthermore, a considerable amount of water can be absorbed in the intestine, resulting in the stool becoming a hard mass that is difficult to excrete and can easily lead to constipation (21). Psychological and dietary interventions are typically recommended for new-onset constipation in pregnant patients, and medications can be considered where these therapies prove ineffective. The formulation of safe and effective drug treatment plans has important clinical significance for the safety of both mothers and babies.

Lactulose is a commonly used drug for the clinical treatment of functional constipation and has little effect on the fetus. Under the action of osmotic pressure, it promotes the softening of feces, increases the volume of the intestinal cavity, promotes the peristalsis of the intestine, and ultimately assists in the excretion of feces (9). It can also increase the number of intestinal probiotics such as Lactobacillus and Bifidobacterium, reduce the number of anaerobic bacteria, and regulate the micro-ecological balance of the intestinal tract (10). Polyethylene glycol 4000 powder is a high-molecular weight polymer. Upon entering the intestinal tract, it increases the water content of feces and promotes its movement through the intestinal tract to be excreted from the body (22). Polyethylene glycol is not metabolized or absorbed in the intestine. Also, it does not affect the absorption of electrolytes, fat-soluble vitamins, and other nutrients, and does not impact colonic transit time or motility. Neither of the two drugs will be absorbed into the blood through the intestinal tract, which will not cause significant impact on the mother and fetus, and the treatment is relatively safe.

In this study, the total effective rate increased after treatment using both medications. Analysis of the scores in the first and second week between the polyethylene glycol group and the lactulose group shows that the former has a more rapid therapeutic effect than the latter (P=0.06, P=0.029), and can effectively shorten the duration of the disease. Considering that there were no differences in the incidence of adverse reactions following treatment, we suggest that neither polyethylene glycol nor lactulose increases the risk of adverse reactions. Both drugs were not absorbed into the blood through the intestine, and did not lead to significant effects on the mother or the fetus.

In summary, polyethylene glycol and lactulose can both effectively treat constipation during pregnancy and improve the quality of life of patients. Patients using polyethylene glycol experience faster relief of clinical symptoms and shorter disease duration. However, the number of cases included in this experiment is limited, and the results may be biased. More research in this area is needed in the future to confirm our findings.

Reporting Checklist: The authors have completed the CONSORT reporting checklist. Available at http://dx.doi.org/10.21037/apm-20-1674

Conflicts of Interest: All authors have completed the ICMJE uniform disclosure form (available at http://dx.doi.org/10.21037/apm-20-1674). The authors have no conflicts of interest to declare.

Ethical Statement: The authors are accountable for all aspects of the work in ensuring that questions related to the accuracy or integrity of any part of the work are appropriately investigated and resolved. This study was conducted in accordance with the ethical principles of the World Medical Association’s Declaration of Helsinki (as revised in 2013) and was approved by the ethics committee of the Affiliated Hospital of Jiangnan University [(2017) KY068]. Informed consent was obtained from all patients.