The reported incidence of CIP may rise to 5% (7), even higher in lung cancer patients (8). As an uncommon but potentially severe complication, CIP typically presents with dyspnea, cough, fever, and chest pain along with pulmonary infiltrates on chest imaging (9). Several pieces of recent literature have reported the risk factors of CIP in patients treated with ICI. However, similar reports in Chinese lung cancer patients are scarce. Despite this, Asians are more susceptible to pneumonitis, as shown by the higher incidence of pneumonitis in Japan (10). The underlying association between genetic polymorphisms and CIP susceptibility deserves to be explored.

Therefore, we designed this study to describe the clinical course, genetic and radiologic characteristics, and risk factors of CIP in Chinese lung cancer patients.

We present the following article in accordance with the STROBE reporting checklist (available at http://dx.doi.org/10.21037/apm-20-1823).

We performed a retrospective study on the patients confirmed with lung cancer and treated with ICI at the First Affiliated Hospital of Nanjing Medical University between December 2017 and September 2020. Excluded were those patients who received a placebo or undetermined therapy, or a follow-up period (between the first ICI exposure and the latest follow-up) of less than 21 days.

Diagnosis, assessment, and management of CIP

The diagnosis of CIP was established on the results of chest computed tomography (CT) and clinical findings after the exclusion of other known etiologies, including infection, tumor progression, congestive heart failure, etc. Invasive diagnostic measures were not taken after a careful risk-benefit analysis. The severity of CIP was assessed following the Common Terminology Criteria for Adverse Events (version 5.0). The attending physician determined the clinical intervention of CIP according to the recommendations of the American Society of Clinical Oncology Clinical Practice Guideline (11).

As recommended by the American Society of Clinical Oncology Clinical Practice Guideline, the diagnosis of CIP was suspected once focal or diffuse inflammation of the lung parenchyma (typically identified on CT imaging) was discovered. After clinical confirmation, the radiology findings, including reticulation, honeycombing, traction, bronchiectasis, ground-glass opacity (GGO), were classified with the five distinct radiologic subtypes of CIP reported by Naidoo et al. (9), as (I) cryptogenic organizing pneumonia (COP)-like, (II) GGO, (III) hypersensitivity type, (IV) interstitial type, and (V) pneumonitis not otherwise specified. Representative CT images of common phenotypes of CIP are shown in Figure 1. 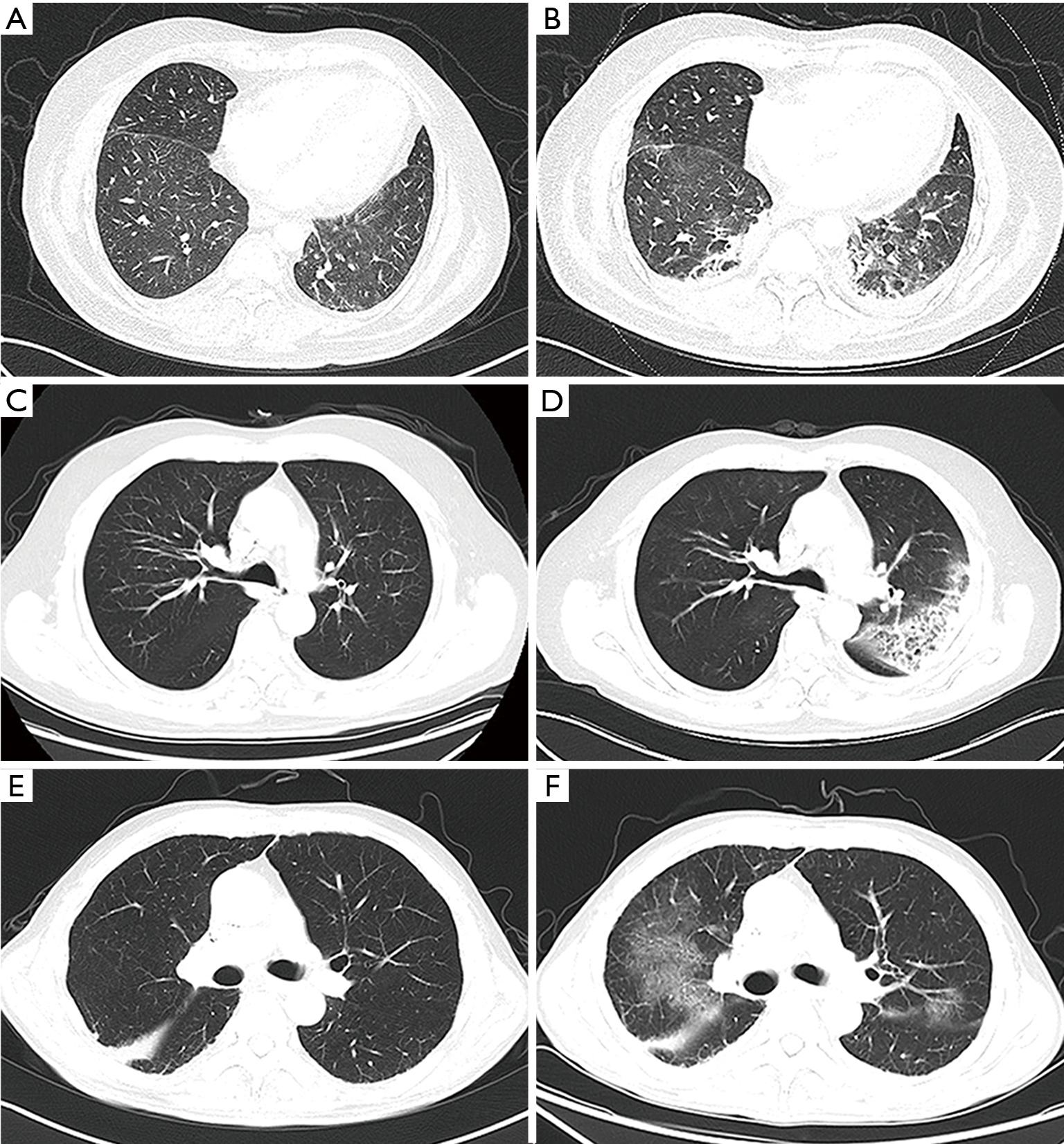 All patients were classified into two groups with the occurrence of CIP. The student’s t-test was used for continuous variables and Pearson’s chi-square test or Fisher’s exact test for discrete variables. The univariate and multivariate logistic regression model analyzed the association between the development of CIP. The MTS was compared using the Mann-Whitney test. PFSs were estimated with the Kaplan-Meier method and compared with the log-rank test. A P value <0.05 was considered to show statistical significance. All analyses were conducted with SPSS 23.0 and GraphPad Prism 8.3.0.

The study was approved by the ethics committees of the First Affiliated Hospital of Nanjing Medical University (No. 2019-SRFA-226). All procedures performed in this study involving human participants were in accordance with the Declaration of Helsinki (as revised in 2013). Individual consent for this retrospective analysis was waived.

We recruited 94 patients with lung cancer who received ICI treatment. The 16 CIP cases (17.0%) were assigned to the CIP group, and the left 78 cases to the non-CIP group. The follow-up period (median, 262 vs. 314 days; P=0.410) and the number of ICI exposures (median, 13 vs. 10; P=0.410) showed no difference between the two groups at the time of data cutoff. We summarized the baseline characteristics and immunotherapy protocols in Table 1. Of the 94 patients, non-small lung cancer was the predominant histologic type, but there were also several small cell lung cancer patients in both groups (12.5% in the CIP group vs. 12.8% in the non-CIP group). As shown in Table 1, no significant differences were observed in the baseline characteristics, except for ECOG PS and pre-existing pulmonary fibrosis that were more prevalent in the CIP group: ECOG PS ≥2 (56.3% vs. 20.5%; P=0.008) and pre-existing pulmonary fibrosis (37.5% vs. 3.8%; P=0.000). 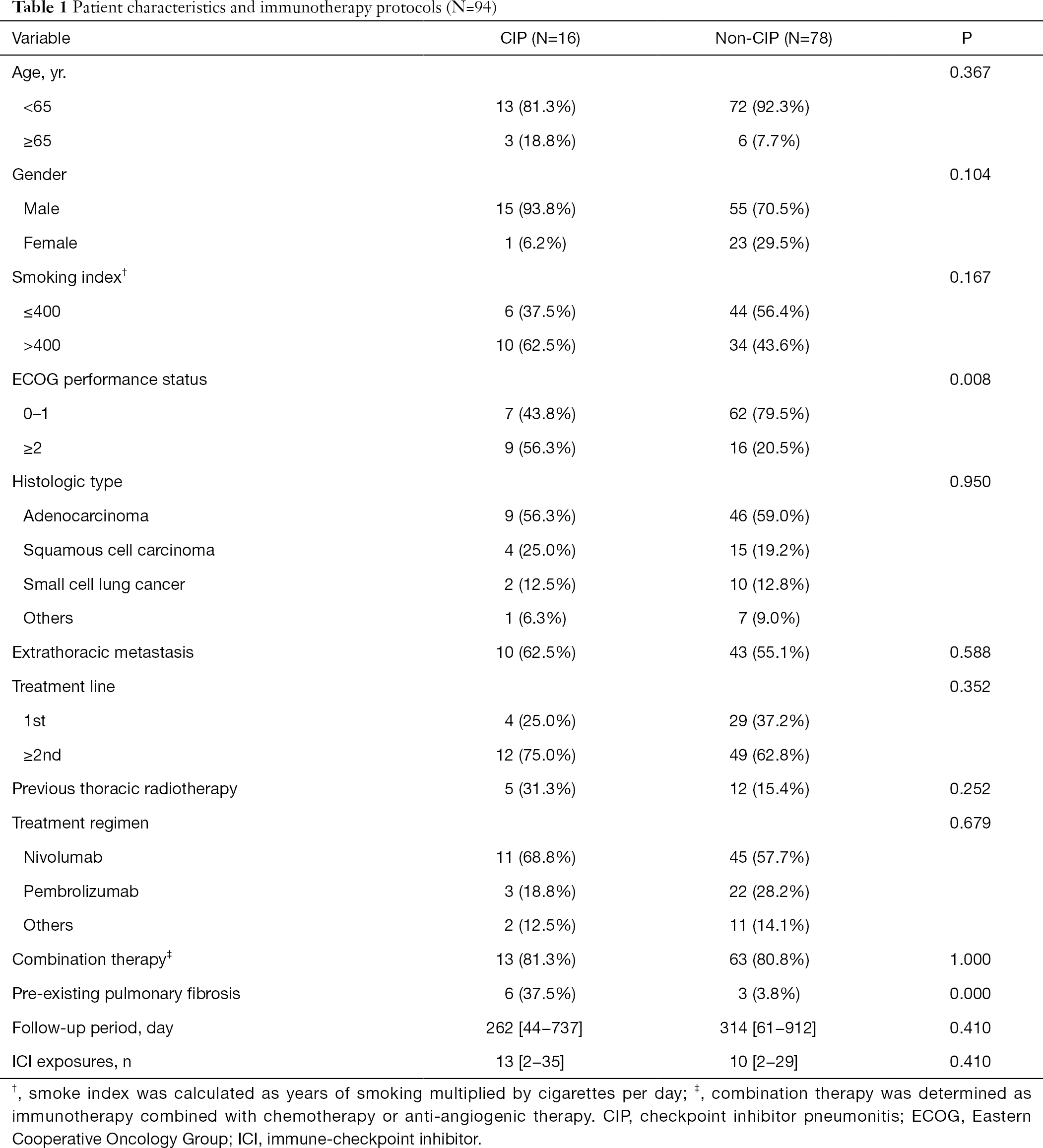 To explore the genetic factors predicting the development of CIP, we performed somatic mutation analysis in 57 patients whose NGS data were available. The top ten most often mutated genes were screened out (detailed information in Table S2), with the highest mutation frequency in TP53 (n=36; 63.2%; Table 3). However, both groups showed similar somatic mutation profiles. An increasing trend in CIP risk was observed in patients with TP53 mutation, but this increase showed no between-group difference (P=0.280). 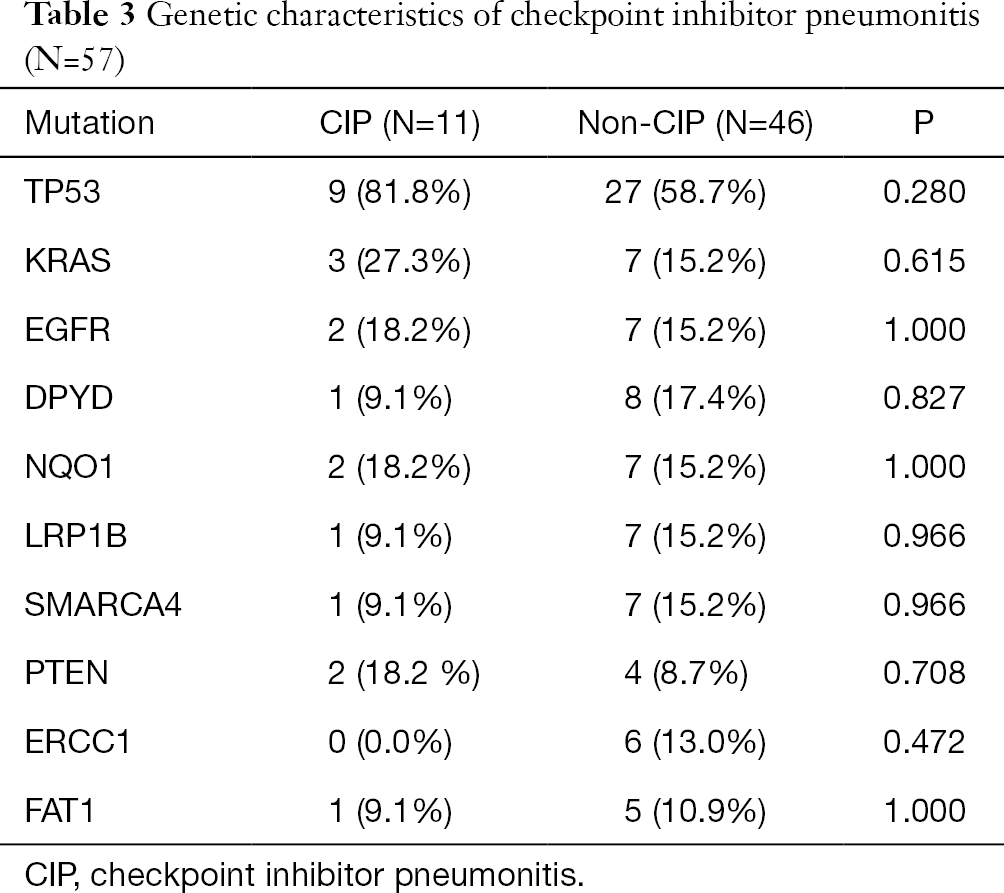 Clinical and radiological features of CIP

Among the 13 patients with CIP, 13 (81.3%) were administered with corticosteroids as per the current guidelines. Four patients were empirically treated with antibiotics. During the follow-up, the majority (n=12; 75.0%) underwent CIP improvement or complete recovery. One patient dropped out of the follow-up, and one died of intestinal perforation arising from concurrent checkpoint inhibitor-related enteritis. After clinical and radiographic improvement, nine patients with CIP received an ICI re-challenge at the discretion of the attending physician. Recurrent CIP was noted in six (66.7%) cases, and their ICI treatment was stopped permanently.

Effect of CIP on ICI outcomes 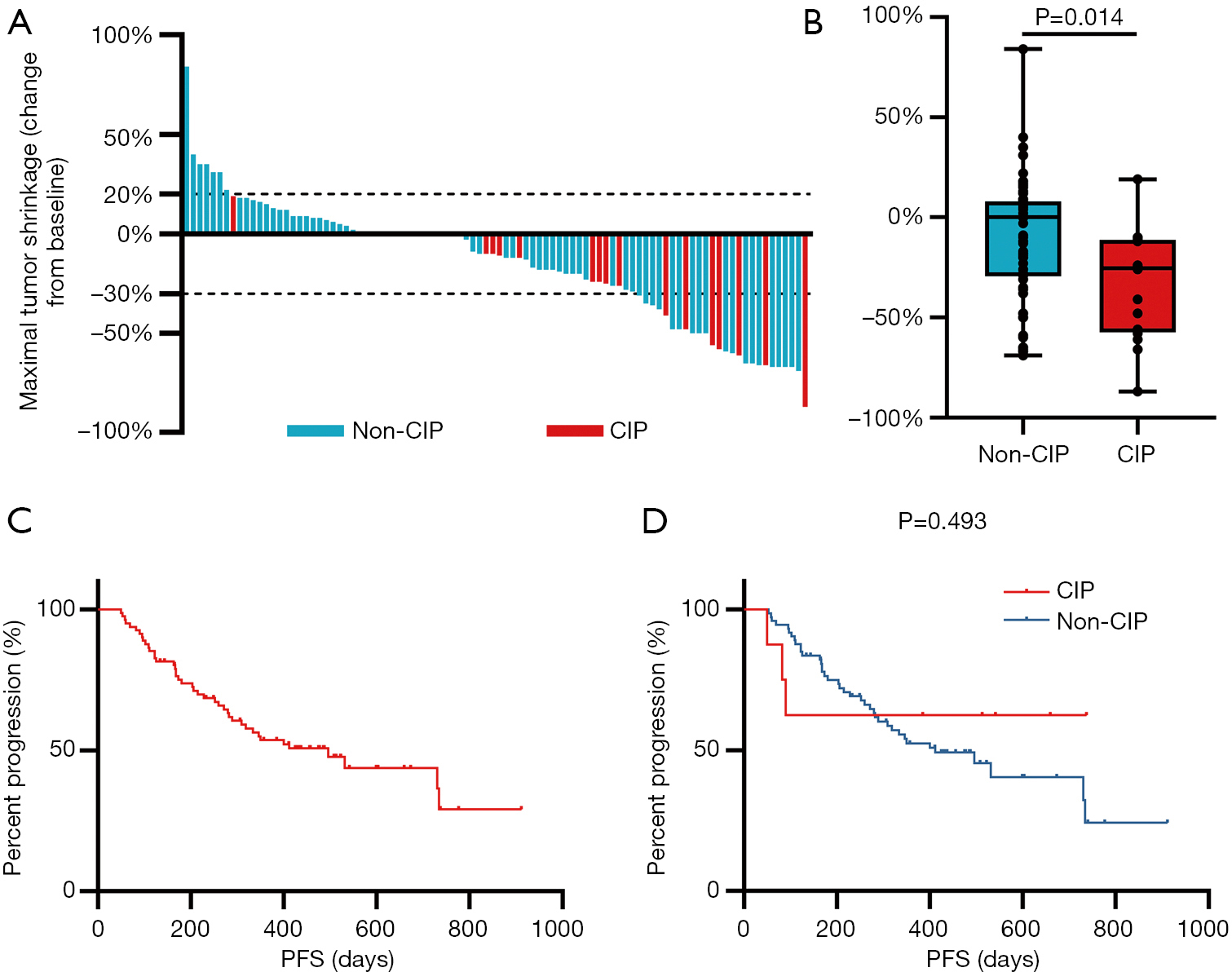 We here reported the characteristics and risk factors of CIP in a cohort of Chinese patients with ICI-treated lung cancer. In the present study, the incidence of CIP was 17.0%. ECOG PS ≥2 (OR =6.53; 95% CI, 1.74–24.46; P=0.005) and pre-existing pulmonary fibrosis (OR =20.13; 95% CI, 3.64–111.44; P=0.001; Table 2) were associated with the higher incidence of CIP, while other factors [including extrathoracic metastasis, smoking history, previous thoracic radiotherapy, combination therapy (12-15)] were not. We also compared the incidence of CIP among patients treated with different ICI. However, the risk of CIP did not differ among patients treated with nivolumab, pembrolizumab or other candidate ICI used in clinical trials (P=0.679), which coincided with previous study (16).

Consistent with earlier studies, our logistic regression analyses showed that patients with poor ECOG PS were more susceptible to developing CIP (17). Studies indicated a higher ECOG PS strongly correlated with worse survival after ICI treatment (18,19). Therefore, ICI clinical trials recruited, with rare exceptions, only patients with ECOG PS 0 or 1 (1-6). However, in our analysis, 26.6% of the patients showed ECOG PS ≥2, offering a more reliable explanation for the higher incidence of CIP than earlier studies (7). This finding reminds clinicians of the possibility of CIP when treating lung cancer patients with a high ECOG score.

Studies concerning genetic characteristics of CIP are scarce. Owen et al. (23) reported fewer irAE developed in patients harboring KRAS and TP53 mutation. However, our findings were contrary. The rate of TP53 mutation, the most frequent in the total population, was higher in the CIP group (81.8% vs. 58.7%; P=0.280). A similar difference was identified in KRAS (27.3% vs. 15.2%; P=0.615), though not statistically obvious. We concluded that TP53 and KRAS mutations might increase a patient’s susceptibility to CIP. However, we focused only on somatic mutations in our analysis, further studies should be performed to analyze genetic characteristics in detail.

The higher CIP incidence we observed in the present study may be attributed to our actual clinical setting. Also, irAEs, including CIP, has gained increasing attention by clinicians. With stricter management of ICI-related adverse events, more CIP cases may be reported, causing its incidence higher than before. Similar to previous study (9,15), the median onset time of CIP was 90 days (range, 22–326 days). This result indicates that CIP may occur early or late after ICI treatment. Suresh et al. (15) also proposed two different phenotypes of CIP: early-onset CIP and late-onset CIP. These data support the crucial need to carefully monitor CIP during the full course of immunotherapy. When monitoring this adverse event, the clinicians should raise awareness of the typical CIP symptoms, including dyspnea and cough. CT is recommended to provide clues of CIP (11). The diagnosis of CIP was suspected once focal or diffuse inflammation of the lung parenchyma was discovered after the ICI treatment. Among the 16 patients with CIP, COP-like was the most common radiological phenotype. Patients of this type may respond better to glucocorticoid therapy (24). In the present study, most CIP patients were managed successfully. Only one patient died of intestinal perforation caused by concurrent immune-related enteritis, which reminds clinicians to pay attention to the simultaneous organ immune adverse events. In our study, nine patients restarted ICI therapy, and six of them experienced CIP relapse, suggestive of the necessity of patient-screening before ICI treatment.

The relationship between the irAE and prognosis of ICI-treated patients has been repeatedly reported. Haratani et al. (25) pointed out that the prognosis of nivolumab treatment was positively correlated with the occurrence of irAE, supported by many other studies (23,26,27). In our analysis, we observed no increased objective response rate in patients with CIP. Then we further tested the response by comparing the MTS rate between the two groups, finding that the CIP group showed deeper remission (median, 25.5% vs. 0.0%, P=0.014). The estimated median PFS is longer in CIP group (not reached) than in non-CIP group (412±79 days), though not statistically significant (P=0.493). We expect larger sample size could bring more credible results. We further performed subgroup analysis by different ICI. Consistent with prior study (16), there was no significant difference in PFS among patients treated with different ICI (P=0.857; data not shown).

There are several limitations to our study. First, it is a single-center, retrospective study with small sample size, increasing the risk of patient selection bias and group selection bias. Prospective studies and larger-size analysis will be needed to verify these results. A second limitation is insufficient invasive means to confirm the diagnosis of CIP, which may be an obstacle in exploring the pathogenesis of CIP. Third, our analysis of genetic characteristics is not comprehensive. We will further investigate the possible association of genetic polymorphisms and CIP susceptibility by performing genome-wide association study in the future.

In conclusion, our study identified ECOG PS ≥2 and previous pulmonary fibrosis are closely correlated to the occurrence of CIP in Chinese lung cancer patients after ICI treatment, a finding that causes early screening and timely intervention necessary in the management of CIP.

Reporting Checklist: The authors have completed the STROBE reporting checklist. Available at http://dx.doi.org/10.21037/apm-20-1823

Conflicts of Interest: All authors have completed the ICMJE uniform disclosure form (available at http://dx.doi.org/10.21037/apm-20-1823). The authors have no conflicts of interest to declare.

Ethical Statement: The authors are accountable for all aspects of the work in ensuring that questions related to the accuracy or integrity of any part of the work are appropriately investigated and resolved. The study was approved by the ethics committees of the First Affiliated Hospital of Nanjing Medical University (No. 2019-SRFA-226). All procedures performed in this study involving human participants were in accordance with the Declaration of Helsinki (as revised in 2013). Individual consent for this retrospective analysis was waived.