Effects of early enteral nutrition on the prognosis of patients with sepsis: secondary analysis of acute gastrointestinal injury study

As the population ages, the incidence of sepsis is increasing, a significant healthcare problem that affects millions of people each year (1). It is defined as a dysregulated host response to the infection caused to life-threatening organ dysfunction and kills one in four (2-4). Intestinal failure is one of the crucial mechanisms of sepsis-induced multiple organ dysfunction, and it is believed the incidence of intestinal failure in septic/septic shock patients is as high as 60% (5,6). Enteral nutrition (EN) could improve clinical outcomes of critically ill patients, including decreased length of hospital stay, reduced mortality (7-9).

The direct benefits of the EN were maintained gut integrity, reduced gut permeability; other benefits were that and attenuated disease severity, modulate stress, and the systemic immune response (10-12). The optimal time to safely and deliver EN in patients receiving intravenous vasopressor support for septic shock was controversy, despite recommendations for early enteral nutrition (EEN) in most critically ill patients (13,14). The patients on vasopressors were recommended EEN may have a beneficial effect on these patients in the 2013 Canadian Critical Care practice guideline for nutrition (15). In 2016, the American Nutrition Guidelines recommended patients with severe sepsis/septic shock should be treated with enteral nutrition (EN) within 24–48 hours, a recommendation to withhold EN in patients who have hemodynamic instability (mean arterial pressure less than 50 mmHg and require initiation or escalation of vasopressors) (16). The European Society of Intensive Care Medicine (ESICM) clinical practice guidelines suggest delaying EN if the shock is uncontrolled and hemodynamic and tissue perfusion goals are not reached; low-dose EN then should be started as soon as the shock is controlled with fluids and vasopressors/inotropes. There is concern regarding the application of EN when very high doses of vasopressors (e.g., norepinephrine >1 µg/kg/min) are required, and hyperlactatemia is persistent or when other signs of end-organ hypoperfusion are present (17). As we know, it was necessary to take EEN, account for patients with sepsis on vasopressors or not—the lack of a consistent definition of EEN, including what time of EN administration was greatest. The study aimed to discuss what time of EEN could improve the prognosis of patients with sepsis. We present the following article in accordance with the STROBE reporting checklist (http://dx.doi.org/10.21037/apm-20-1650).

This study was a secondary analysis of pooled data from the acute gastrointestinal injury grade study, which was a prospective, observational, multicenter study. The research was registered in the Chinese Clinical Trial Registry (ChiCTR-OCS-13003824). The primary trial endpoint and study protocol have been published previously (18). Patients were screened for eligibility within 24 hours of ICU admission. Written informed consent was retrieved from all participators before inclusion. The inclusion criteria: (I) >18 years of age; (II) acute Physiology and Chronic Health Evaluation II (APACHE II) score >8; (III) they were required to stay for at least 24 hours in the ICU; (IV) the patients with sepsis [the diagnostic criteria for sepsis, defined as sepsis-3, are infection-causing, life-threatening organ dysfunction, and Sequential Organ Failure Assessment (SOFA) ≥2]. The exclusion criteria: (I) AGI could not be tested for any reason; (II) advanced cancer; (III) any terminal stage disease. The initiation criteria for continuous EN in the ICU were guided by a multidisciplinary approach following the nutrition protocol.

The research protocol was reviewed and approved by the Ethics Committee of Zhejiang Provincial People’s Hospital (2013KY050). The study was conducted in accordance with the Declaration of Helsinki (as revised in 2013).

All patient data were provided in a specific case report, including baseline demographic and clinical characteristics and nutritional status, APACHE II score and Sequential Organ Failure Assessment (SOFA) score were collected within the first 24 hours of ICU admission. The primary outcome was 28- and 60-day all-cause mortality after admission. Patients who survived were followed by telephone.

APACHE II, SOFA, and NRS2002 measurement data are shown as the mean ± standard deviation. The normally distributed data are determined with independent T-tests. The non-positive distribution used an analysis of variance. The count data, including survival rate and survival time, are expressed in terms of median quartile and rate, using the Mann-Whitney test and Chi-square test. The patient source used the Kruskal-Wallis test. Kaplan-Meier survival analysis was performed to estimate the 28- and 60-day cumulative survival. The log-rank test was used to compare the survival rates of different subgroups of patients. The prognostic value of the variables was assessed using a univariate and multivariate Cox proportional hazard regression model. P<0.05 was considered to show statistical significance. SOFA was initially tested as the severity of sepsis at a time point, not as a prognostic factor for mortality (19). Therefore, COX analysis did not include the SOFA in this study. The statistical software used was SPSS 22.0 and Graphpad Prism 6.0.

A total of 676 consecutive critically ill patients were recruited from 14 general ICUs. Per the inclusion and exclusion criteria, 163 patients with sepsis were included. Among the 163 patients, 79.1% were admitted for a medical reason. These patients had a median age of 70 years with a body mass index (BMI) of 20.2±5.8 kg/m2, and the APACHE II score was 20.5±7.1, SOFA score of 9.8±4.4, and NRS2002 score of 2.1±1.3. The primary demographic characteristics of patients are given in Table 1. The primary organ disorders of patients were respiratory failure (75.4%), using vasoactive drugs (49.7%), and acute kidney injury (20.2%). Among study patients, chronic obstructive pulmonary disease, coronary artery disease, and diabetes mellitus accounted for 22.7%, 16.6%, and 17.2%, respectively. Also, 137 patients (84.0%) received mechanical ventilation, and 22 (13.5%) received renal replacement therapy (RRT). Of the 163 patients, the EEN group (≤24 hours) formed 85 patients (52.1%) and the control group (>24 hours) 78 (47.9%). There were 125 patients (76.7%) receiving EN within three days and 136 patients (83.4%) receiving EN within seven days. No significant differences were observed in baseline disease severity, age, BMI, Gender, Patient Source, other Comorbidities, Complications, the number of people who CRRT or the number of people who had intravenous glucocorticoid, vasopressor, and insulin agents at baseline. 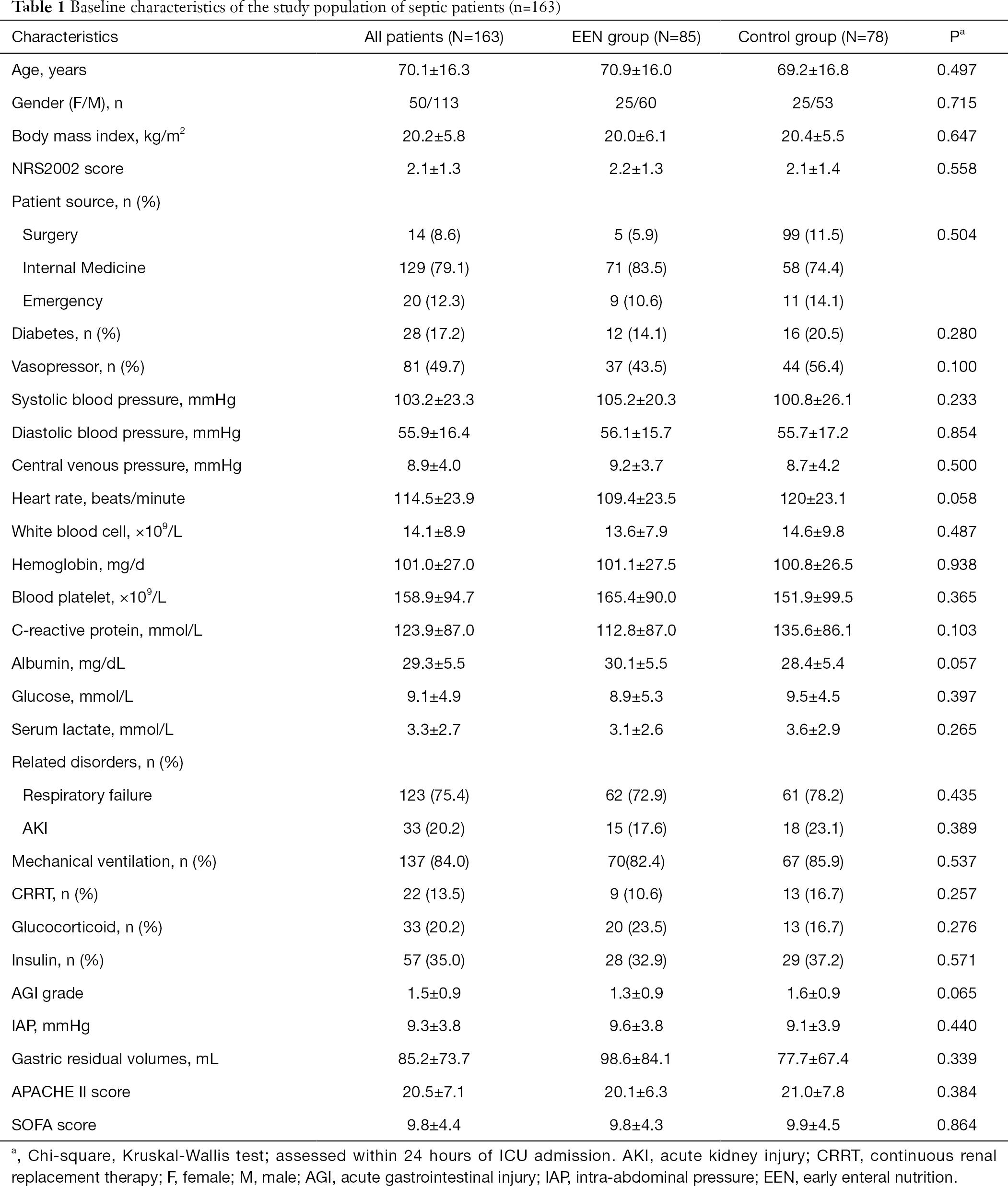 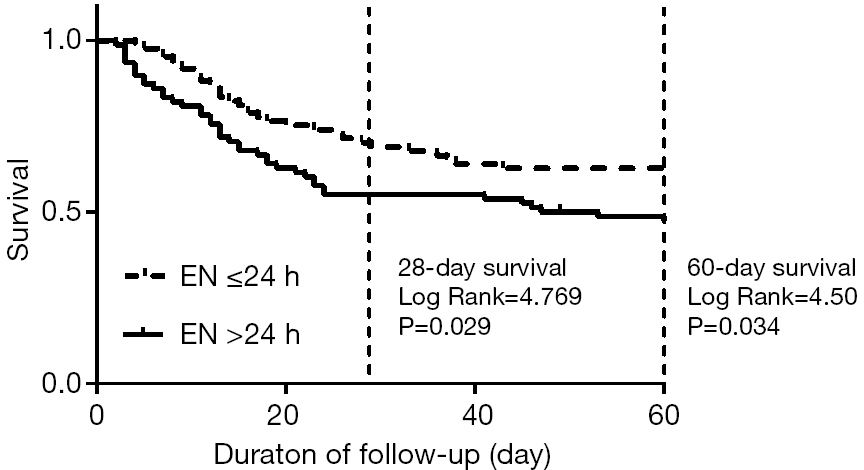 Figure 1 Kaplan-Meier curves stratified on the time of EN in the overall population for 28- and 60-day mortality. P values were for differences across the time of EN by log-rank test. EN, enteral nutrition. 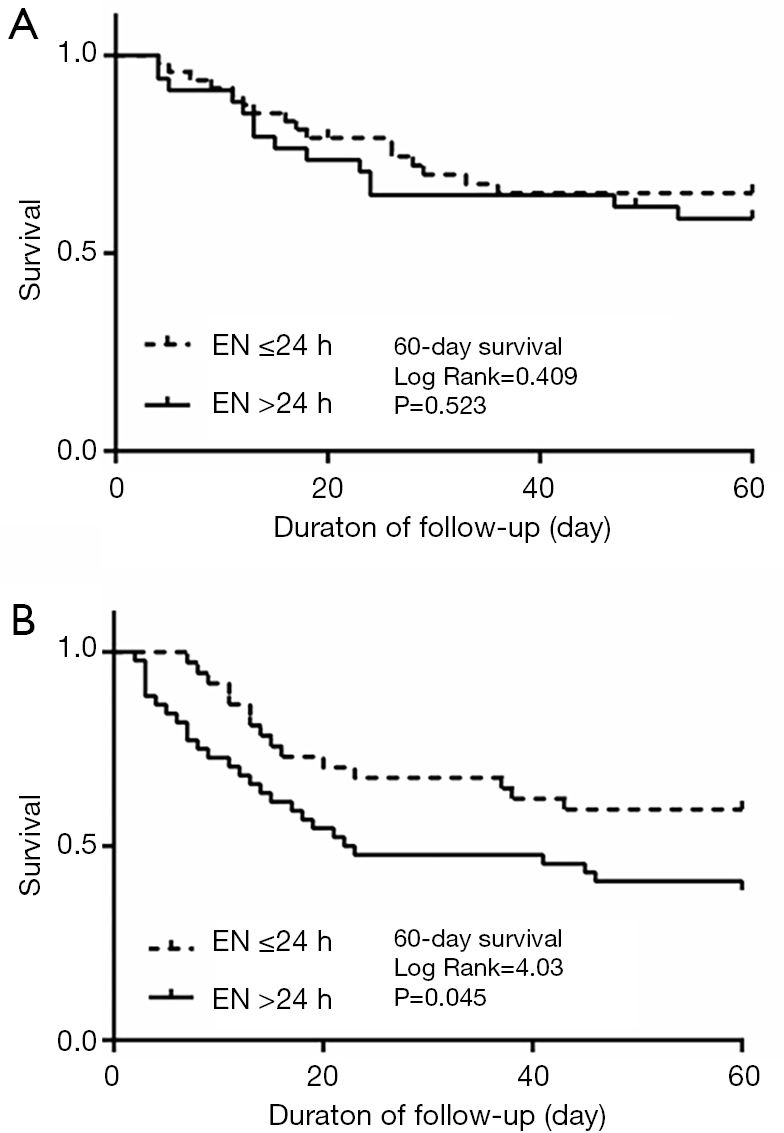 Univariate and multivariate analyses for 60- day mortality and side effects

Table 4 Side effects of patients with sepsis
Full table

Current studies of EEN in patients with sepsis/septic shock are still lacking, because of inconsistency in the severity of sepsis, which could cause a bias in patient selection. At present, three meta-analyses have compared early EN to the late-stage EN therapy in critically ill ICU patients (20-22). The time for early EN was 48, 36, and 24 hours. These meta-analyses found EEN can reduce mortality in critically ill patients. The American Nutrition Guidelines incorporate 21 comparisons of early and late-stage EN and standardized EN RCT studies included in re-analysis: EEN therapy can significantly reduce the mortality rate (RR =0.70; 95% CI, 0.49–1.00; P=0.05). In this study, the COX analysis of the mortality rate of early EN compared to late-stage showed that early EN, within 24 hours, can significantly reduce sepsis/septic shock in patients with 28-day mortality and 60-day mortality compared with late EN (Figure 1). EEN in patients with sepsis on vasopressors had a more significant in 60-day mortality (Figure 2B). There are no significant differences in the side effects of EN between patients, whether on vasopressor (Table 4). Because the former ICU critically ill patients included patients with sepsis/septic shock, this study found EEN outcomes in terms of mortality were consistent with those in critically ill patients. The new incidence of infection is inconsistent, probably because the original does not include intestinal dysfunction in the non-sepsis/septic shock of critically ill patients. Therefore, some basic clinical research (trauma, postoperative patients) found EEN can maintain intestinal mucosal integrity and reduce intestinal permeability and, together, can improve the intestinal immune barrier, preventing bacterial and endotoxin translocation, to reduce the incidence of secondary infection (23-25). However, intestinal dysfunction was inherent in patients with sepsis; bacterial and endotoxin translocation itself was one mechanism of sepsis. Thus, EN can treat intestinal failure and promote intestinal recovery, reducing mortality, but the infection has been present, and EN therapy, therefore, will not contribute to improving the incidence of new infections.

Simultaneously, the relationship between vascular drugs and EEN intolerance was defined as inconsistently (26-28). Mesenteric ischemia is the leading risk when administering EN to sepsis/septic shock patients who are taking vascular drugs. There is concern that EN in shock further jeopardizes the already impaired splanchnic perfusion. Mesenteric ischemia has a mortality rate of up to 80%, but an incidence of only about 0.3–3.8% (29). There was no evidence for a causal relationship between shock, vasopressors, EN, and non-occlusive mesenteric ischemia (NOMI) in some patients who suffered from NOMI (27,30,31). A recent study suggests that norepinephrine <0.14 mg/kg/min EEN was safe and tolerable in patients with sepsis/septic shock within the first 48 hours (13). Our data also shows there were no patients with mesenteric ischemia. There are no significant differences in the side effects of EN between patients, whether on vasopressor (Table 4). Therefore, EEN administration is safe when the patients with sepsis are circulatory stable. The benefits of the EEN were maintained gut integrity, reduced gut permeability.

An interesting problem was found in this study: the length of ICU stay [median time (quartile time)] of the early and late-stage EN groups, respectively, was 11 [8–22] and 10 [6–16] (P=0.022); the length of hospital stay was 23 [14–53] and 18 [10–39] (P=0.023). The length of ICU stay and length of hospital stay was longer in early EN patients than in the late-stage group, contrary to previous reports, which suggests that early EN in ICU critically ill patients reduced ICU time and length of hospital stay (22,32). Although the study did not account for the cost of hospitalization for sepsis, it is conceivable that this contradicts reports that early EEN can reduce hospital costs for ICU patients (33). We currently believe patients with sepsis in the septic shock treatment cycle should be calculated in weeks, and some even up to several months. We found that early EN therapy can significantly improve the survival rate of sepsis patients. The surviving patients certainly need time for rehabilitation, so we do not find it difficult to understand why early EN improves the survival rate of sepsis patients while leaving ICU time and the total length of stay longer in these patients than patients with late EEN. Together, we found there was no significant difference in ICU time and hospital stay between the two groups, which confirms our inference that the differences in mortality between the two groups result in the two groups having differences in ICU and hospital length of stay.

Insufficient research due to the observational nature of the study, and the sample quantity being insignificant. The initial design of this study was not considered sepsis patients. The time set in this study is time the patient enters the ICU, not the time of onset of sepsis. The relationship between shock, time, vasopressors, EN, and NOMI needs further research to explain.

We gratefully acknowledge all the physicians, nurses, dietitians, patients, and the local investigators of each hospital involved at the 14 participating centers for their dedication to the study.

Reporting Checklist: The authors have completed the STROBE reporting checklist. Available at http://dx.doi.org/10.21037/apm-20-1650

Conflicts of Interest: All authors have completed the ICMJE uniform disclosure form (available at http://dx.doi.org/10.21037/apm-20-1650). The authors have no conflicts of interest to declare.

Ethical Statement: The authors are accountable for all aspects of the work in ensuring that questions related to the accuracy or integrity of any part of the work are appropriately investigated and resolved. The research protocol was reviewed and approved by the Ethics Committee of Zhejiang Provincial People’s Hospital (2013KY050) and was registered in the Chinese Clinical Trial Registry (ChiCTR-OCS-13003824). The study was conducted in accordance with the Declaration of Helsinki (as revised in 2013). Written informed consent was retrieved from all participators.