Anxiety and depression among Tibetan inpatients with cancer: a multicenter investigation

We present the following article in accordance with the SURGE reporting checklist (available at http://dx.doi.org/10.21037/apm-20-1721).

The present study was approved by the ethics committees of the involved hospitals (No.: 2018-11), and informed consent was obtained from all of the patients. All procedures performed in this study involving human participants were in accordance with the Declaration of Helsinki (as revised in 2013).The patients were recruited through posters directed at Tibetan and Han cancer patients admitted to the Department of Oncology, Hospital of Chengdu Office of People’s Government of Tibetan Autonomous Region (Hospital.C.T); Department of Oncology, 363 Hospital; and Cancer Center, West China Hospital of Sichuan University from January 2016 to January 2018. The total number of Tibetan and Han patients recruited was 245. The inclusion criteria were as follows: (I) no mental health issues before cancer diagnosis by cytological or histological pathological examination; (II) could clearly understand and complete the questionnaires; and (III) at least 18 years old. The exclusion criteria were as follows: (I) concomitant mental symptoms and affective mental disorders, or use of psychotropic drugs before cancer diagnosis; (II) serious cognitive disorder and alogia; and (III) <18 years old. Patients who did not complete the questionnaires or providing conflicting responses to the questions were also excluded.

The Chinese SDS and SAS were translated into Tibetan by Tibetan members from the Tibetan Medicine Office of 363 Hospital, and then back-translated by specialists proficient in Chinese and Tibetan for cross-cultural availability. A pre-survey involving 20 Tibetan patients who could effectively communicate in both Tibetan and Chinese was conducted to analyze the reliability and validity of the Tibetan versions of the SDS and SAS, and appropriate amendments were made.

The questionnaire survey with unified instruction was applied by investigators specially trained before the formal survey. The selected patients independently completed the questionnaires within 30 minutes. All completed questionnaires were kept by the document controller at the Department of Oncology, 363 Hospital.

We used EpiData 3.1 software for the double data input of questionnaires, and analyzed these using SPSS version 21.0. We presented continuous variable data as mean value ± standard deviation. Student’s t-test was used to compare two groups, and analysis of variance was used to compare multiple groups. The rank sum test was used to analyze ranked data, and χ2-test was used for classified variables. Binary logistic regression analysis was used to analyze the factors influencing depression and anxiety among patients. The level of significance was α=0.05, and the difference was statistically significant at P<0.05.

A total of 245 questionnaires were distributed, of which 238 were completed (93.9%). Of these, eight were considered invalid due to being incomplete. The Tibetan cancer patients were aged 23–80 years, with an average age of 56.03±11.6 years. There were 74 male patients (64%) and 41 female patients (36%); 59 patients were from the Tibet Autonomous Region, 55 were from Sichuan Province, and 1 was from another province. There were 16 patients with respiratory cancer, 65 with digestive system neoplasms, 6 with reproductive cancers, 9 with head and neck neoplasms, and 19 with other cancers. Forty-five patients were illiterate, 30 had a primary school education, 21 had a junior high school education, 3 had a senior high school education, and 16 had a college degree or higher.

The Han cancer patients were aged 27–87 years old, with an average age of 55.04±11.8 years. There were 75 male patients (65%) and 40 female patients (35%); 2 were from the Tibet Autonomous Region, 103 were from Sichuan Province, and 10 were from other provinces. There were 20 patients with respiratory cancers, 68 with digestive system neoplasms, 2 with reproductive cancers, 7 with head and neck neoplasms, and 18 with other cancers. Four patients were illiterate, 21 had a primary school education, 34 had a junior high school education, 24 had a senior high school education, and 32 had a college degree or higher. The differences between these two groups of cancer patients were statistically significant, except for, age, marital status, and type of cancer. 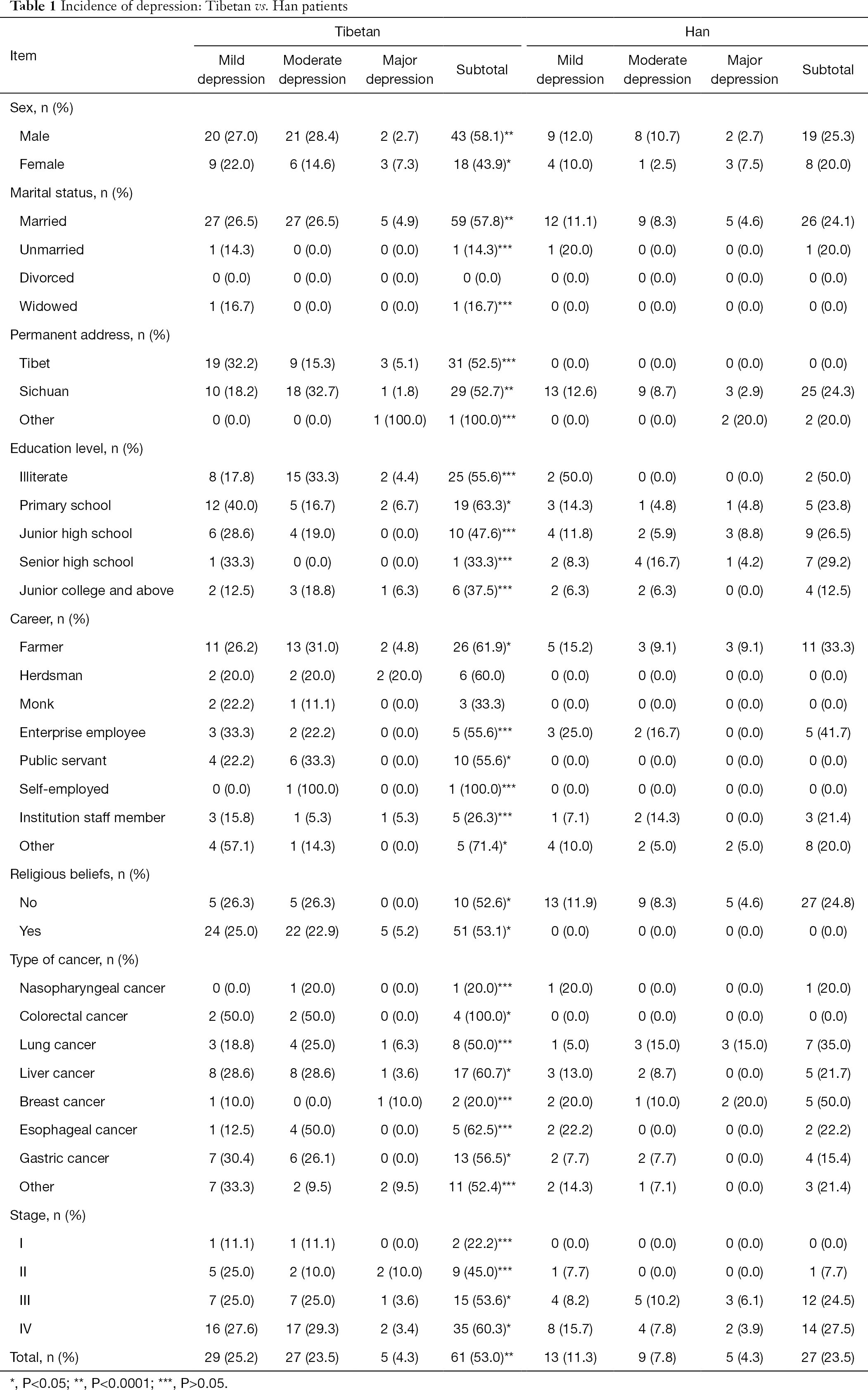 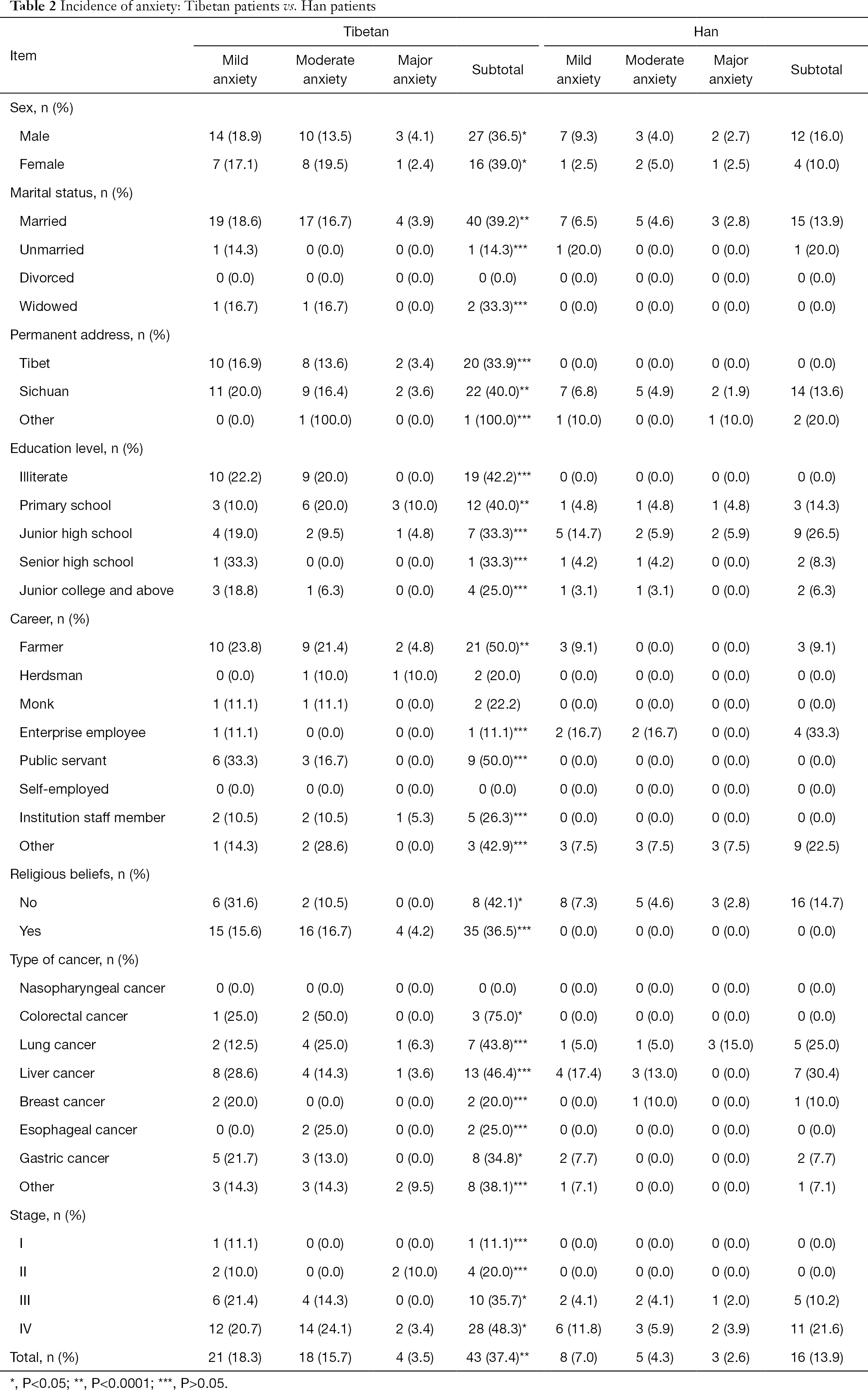 Tibetan cancer patients receiving offsite medical treatment often have challenges due to communication and differences in culture and religious beliefs. This increases the incidence of depression and anxiety, in combination with the adverse effects of the cancer.

Pain, reduced household income, medical insurance payment modes, and other factors that impact the mental well-being of cancer patients were not considered during the study design. Studies in China have shown that the average scores for depression and anxiety in patients with no pain are significantly lower than those for patients with pain, and the number of patients with depression among those with no pain is significantly less than those with pain. The duration and maximum intensity of pain had a significantly positive correlation with depression, and pain relief had a significantly negative correlation (9). It is necessary to include additional factors influencing depression and anxiety in these questionnaires in future studies, and to conduct further studies in the local hospitals of the Tibetan population for complete and reliable results. The present study used a small sample size, and a representative sample size was further reduced after stratification; therefore, the efficiency of the statistical test was reduced. The sample size of future studies should be increased, and the statistical analysis should be improved to provide a scientific basis for late psychological intervention.

Based on the findings of the present study, we recommend that medical personnel consider the mental health problems of minority patients with cancer to improve the early recognition rate and the treatment of cancer patients with depression and anxiety in order to minimize their length of hospital stay, medical expenses, and psychological distress, and to improve their treatment compliance and quality of life. It is important to further explore the mental health of Tibetan and other Chinese minorities with cancer to promote the balanced development of all nationalities, maintain social security, and unity and promote social harmony and stability (10).

Reporting Checklist: The authors have completed the SURGE reporting checklist. Available at http://dx.doi.org/10.21037/apm-20-1721

Conflicts of Interest: All authors have completed the ICMJE uniform disclosure form (available at http://dx.doi.org/10.21037/apm-20-1721). The authors have no conflicts of interest to declare.

Ethical Statement: The authors are accountable for all aspects of the work in ensuring that questions related to the accuracy or integrity of any part of the work are appropriately investigated and resolved. All procedures performed in this study involving human participants were in accordance with the Declaration of Helsinki (as revised in 2013). The present study was approved by the ethics committees of the involved hospitals (No.: 2018-11), and informed consent was obtained from all of the patients.