Coronary heart disease (CHD) is a chronic inflammatory disease, the progression of which can lead to rapid changes in the functional ability of patients with CHD. Laryngoscope and endotracheal intubation cause increased blood pressure (BP) and human resources (1,2). This hemodynamic pressure may lead to an imbalance between myocardial oxygen consumption and supply, thus inducing myocardial ischemia, which may be normal cardiovascular status in durable patients but potentially harmful in patients with CHD. The process of intubation under general anesthesia is a severe stress on the cardiac function of the patient. Therefore, it is essential to reduce cardiovascular stress caused by laryngoscope and endotracheal intubation in high-risk patients. Several drugs have been used to control these hemodynamic changes, including a low dose of fentanyl, local anesthetics, α- or β-adrenergic blocking agents, and other vasodilators (3-9). Sufentanil, a derivative of fentanyl, is found to be the greatest potent opioid that may occur due to its marked U-receptor affinity. Both fentanyl and sufentanil are wildly used to control cardiovascular responses induced by tracheal intubation. In healthy normotensive patients without cardiovascular disease, they showed a similar effect in blunting the cardiovascular changes after the process of tracheal intubation (9-11). However, the efficacy of fentanyl and sufentanil has not yet been compared in patients with abnormal cardiovascular function.

A prospective, randomized, double-blind study was conducted to investigate the different effects of sufentanil and fentanyl on cardiovascular stress during endotracheal intubation in patients with CHD. We present the following article in accordance with the CONSORT reporting checklist (available at http://dx.doi.org/10.21037/apm-20-1813).

This study followed the Declaration of Helsinki (as revised in 2013) and was approved by the Ethics Committee of Shengjing Hospital, Shenyang, Liaoning Province, China (No. 2015PS57J). Written informed consent was obtained from all subjects. Fifty CHD 65–75 years old patients scheduled for coronary artery bypass grafting (CABG) under general anesthesia were randomly allocated to two groups to receive either fentanyl (n=36) or sufentanil (n=35). Coronary angiography in each patient showed lesions in all three major coronary arteries and significant narrowing in at least one major coronary artery (≥75%). Exclusion criteria were a history of reactive airway disease, gastroesophageal reflux, morbid obesity, a known or predicted difficult airway using a sealed envelope method, patients were randomized to fentanyl or sufentanil groups to receive the following treatments in a double-blind manner: fentanyl 4 µg/kg or sufentanil 0.4 µg/kg. An independent anesthesiologist prepared each treatment, with a maximum of 5 mL of saline, and the researchers were unaware of the drug’s identification. All patients were premedicated intramuscularly with 0.3 mg of scopolamine and 10 mg of morphine thirty minutes before the induction of anesthesia. An intravenous (i.v.) access, five-lead surface electrocardiogram monitoring, pulse oximetry was set up when the patient arrived in the operation room. Then a radial arterial catheter was inserted under local anesthesia for continuous monitoring of BP. HR and BP were recorded as the baseline (T0) when the patient was awake. Then, the anesthesia was induced with 0.02–0.04 mg/kg of midazolam and 0.2–0.3 mg/kg of etomidate. Intubation was facilitated with 0.6–0.8 mg/kg of rocuronium. Subsequently, the tracheal intubation was started 5 min after sufentanil/fentanyl injection. HR and BP were recorded (T1) before intubation.

During the intubation, the patient’s head is placed in the inspiratory position. An experienced anesthesiologist performed intubation using a Macintosh laryngoscope (Timesco, London, UK). Laryngoscopy and endotracheal intubation were completed within 30 seconds. The tracheal tube is inserted into the glottis until the cuff is 1 cm below the vocal cords, under direct vision. Patients who needed multiple attempts to be successfully intubated were excluded from the statistical analysis. After successful intubation, pulmonary mechanical ventilation was performed using a 100% oxygen mixture and 1% inhalation of sevoflurane, with a fresh air flow of 2 L/min. The ventilator settings were adjusted to maintain the final CO2 level of 4.6–5.2 kPa (35–40 mmHg). No operations were performed during the observation, including head movement, tube fixation, and surgical field skin preparation. HR and BP were recorded at once after and at 1, 3, 5 min after tracheal intubation (T2, T3, T4 and T5). The rate pressure product (RPP) is calculated by multiplying SBP by HR.

The two groups were comparable concerning age, weight, height, gender, and associated disease (Table 1). The preoperative cardiovascular medications were well-matched between the two groups (Table 2). Also, the dosages of midazolam, etomidate, and rocuronium administered during induction in each group were similar. No significant hemodynamic differences on baseline were observed between the two groups. 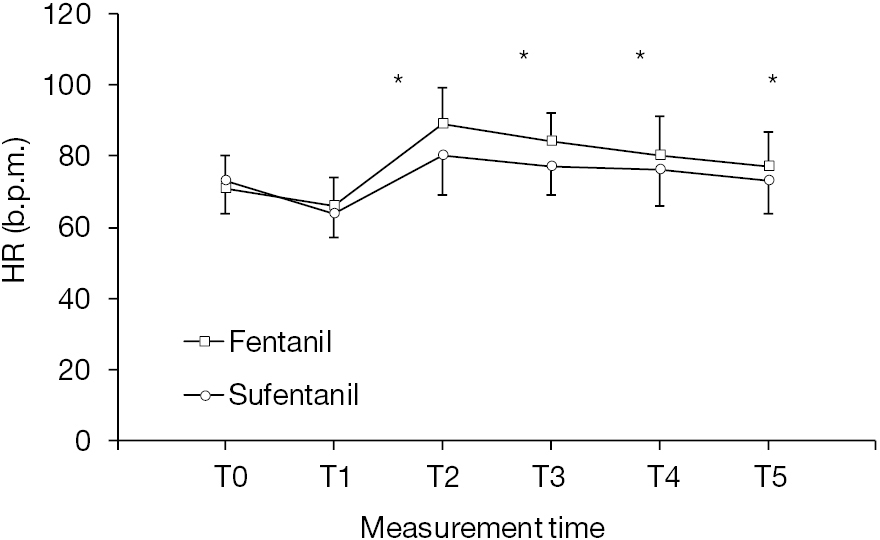 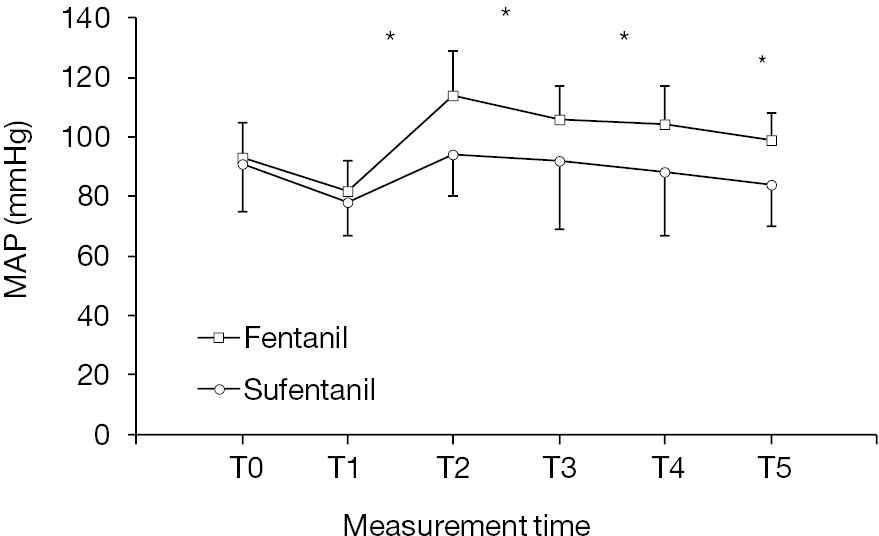 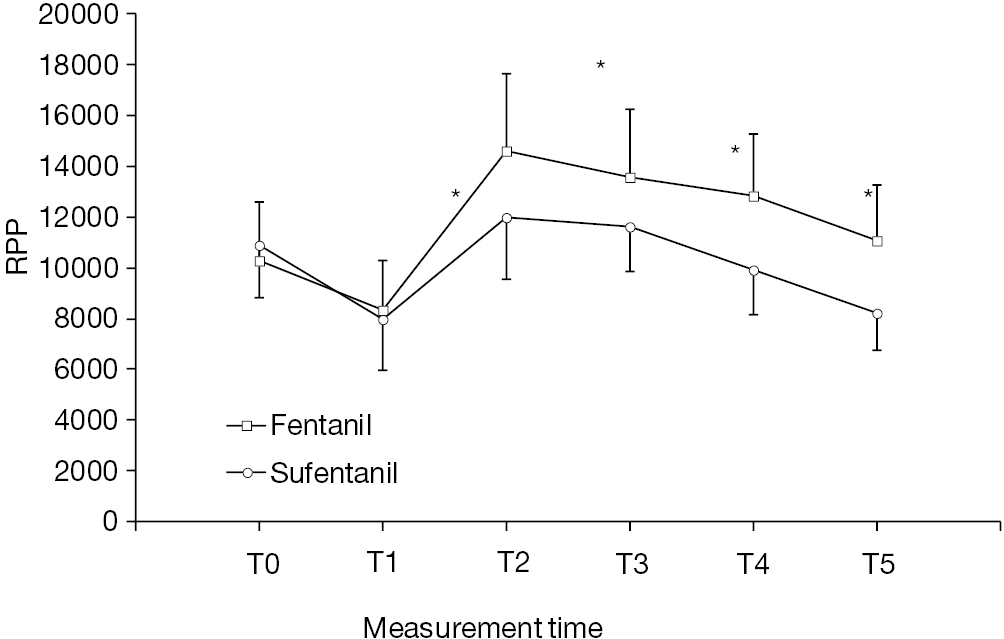 Laryngoscopy and tracheal intubation often lead to sympathoadrenal excitement and induce undesirable increases in BP and HR (12). The transient hemodynamic changes are probably of no consequence in healthy individuals. However, they may be dangerous to those with hypertension, myocardial insufficiency, or cerebrovascular disease. Sufentanil has been reported to have fewer hemodynamic effects than fentanyl. It, therefore, is expected to decrease myocardial oxygen consumption and improve myocardial oxygen balance (13). It has been reported that peak effector concentrations of fentanyl and sufentanil took 4–5 minutes after a single injection (14), so in this study, tracheal intubation was started 5 min after sufentanil/fentanyl injection. Consider the fact that HR is the primary controllable determinant of myocardial oxygen balance (15), the utility of sufentanil to control tachycardia and reduce harmful cardiovascular stimulation induced by tracheal intubation is warranted in clinical practice, particularly in the patients with a high risk of cardiovascular dysfunction.

In the previous study, Nazir et al. (17) selected 1,408 children to evaluate the effect of opioids on the reduction of hemodynamic response after endotracheal intubation in pediatric patients under 16 years of age undergoing elective surgery. They observed that 3 µg/kg of remifentanil and 0.3 µg/kg of sufentanil were most effective in suppressing stress responses to intubation, but could lead to hypotension in patients who did not undergo surgical stimulation. Opioid-related side effects and arrhythmias have been observed in few patients.

When myocardial contractility and left ventricular filling, pressure is stable, RPP can well reflect myocardial consumption (18). If RPP >20,000, myocardial ischemia may happen. In the fentanyl group, eight patients suffered from RPP >20,000 (30%) due to tracheal intubation, but only two patients suffered from RPP >20,000 (8%) in the sufentanil group. This result suggests sufentanil more effectively suppresses myocardial consumption than fentanyl after the process of tracheal intubation. To correctly compare the effects of fentanyl and sufentanil, the two drugs must be used at the same dose. By comparing the data of the sufentanil group and fentanyl group, we found the increase and time of MAP, HR, and RPP during intubation in the fentanyl group was significantly greater than that in the Sufentanyl group. These findings indicate at an equipotent dose, sufentanil but not fentanyl can effectively inhibit an undesirable cardiovascular stimulation as judged by blocking the increase in MAP, HR, and RPP provoked by tracheal intubation in the patients with CHD. Our findings correspond with those of other studies (19,20). The difference in the attenuation of cardiovascular intubation response between the two drugs may be due to the stronger analgesic effect of sufentanil, the more effective reduction of systemic vascular resistance, or the better inhibition of hormonal responses to harmful stimuli (21,22).

It should be pointed out that even though BP in two groups significantly decreased from baseline values after anesthesia induction, only a small proportion of patients (5.6%) in both groups experienced a decrease in MAP to <70% of baseline value, and the observed decreases in MAP values did not require treatment for any subject.

Also, we did not experience opioid-related side effects, for example, bradycardia, a violent cough, or a stiff chest wall.

In conclusion, results of this prospective, randomized, double-blind study demonstrated that, while laryngoscopy and tracheal intubation provoke an undesirable increases in BP and/or HR, lead to an imbalance between myocardial oxygen consumption and supply and induce myocardial ischemia for CHD patients, anesthesia induction with 0.4 µg/kg sufentanil is more potential than fentanyl to attenuate the cardiovascular response.

Reporting Checklist: The authors have completed the CONSORT reporting checklist. Available at http://dx.doi.org/10.21037/apm-20-1813

Conflicts of Interest: All authors have completed the ICMJE uniform disclosure form (available at http://dx.doi.org/10.21037/apm-20-1813). The authors have no conflicts of interest to declare.

Ethical Statement: The authors are accountable for all aspects of the work in ensuring that questions related to the accuracy or integrity of any part of the work are appropriately investigated and resolved. This study followed the Declaration of Helsinki (as revised in 2013) and was approved by the Ethics Committee of Shengjing Hospital, Shenyang, Liaoning Province, China (No. 2015PS57J). Written informed consent was obtained from all subjects.