Reportedly, astaxanthin, which is generally containing in natural sea products including crab, shrimp, salmon, and salmon roe (1), has a strong antioxidant property with a potency >100-fold greater compared with that of α-tocopherol (2) and indeed inhibits oxidative damage and its related systemic inflammatory responses, both of which are the established cardiovascular risk factors and are regarded as potential target for intervention. Previous studies showed that supplementation of astaxanthin decreased the plasma oxidative stress maker levels and serum of pro-inflammatory cytokines levels such as C-reactive protein (CRP) and tumor necrosis factor (TNF)-α in healthy women or overweight/obese subjects (3,4). Therefore, astaxanthin is thought to have protective effects of the cardiovascular system. However, there are limited data regarding the improvements of clinical cardiovascular parameters by astaxanthin supplementation. Other data have suggested that astaxanthin has beneficial effects on exercise tolerance due to its antioxidant properties (5-7). These findings suggest that astaxanthin supplement is beneficial for exercise tolerance particularly in subjects with increased oxidative stress.

In this regard, in patients with heart failure (HF) who generally suffer from increased oxidative stress (8), astaxanthin supplementation may benefit the improvement of exercise tolerance. We recently showed that 3-month astaxanthin supplementation may improve cardiac contractility and exercise tolerance, possibly through the suppression of oxidative stress in a small pilot study involving patients with HF with left ventricular (LV) systolic dysfunction (9). In terms of exercise tolerance, most of the exercise tests are aiming to evaluate exercise performance at maximal workloads, but daily physical activities do not require energy expenditure in the maximal range particularly in patients with HF. Therefore, the improvement of exercise tolerance observed in our previous study should be confirmed by other measures that can allow the expression of the extent of submaximal physical activities.

We enrolled patients with systolic HF at Juntendo University Hospital (Tokyo, Japan) if they met the following criteria: (I) men and women aged ≥20 years, (II) HF due to ischemic or nonischemic cardiomyopathy, (III) left ventricular ejection fraction (LVEF) <50% on echocardiography, (IV) New York Heart Association functional class ≥ II, and (V) stable condition as evidenced by the lack of symptoms related to the acute exacerbation of HF. The exclusion criteria included: patients who could not undergo the 6-min walk test; those who could not answer a questionnaire by themselves; those who underwent cardiac surgery during 4 weeks prior to the enrollment; those with acute coronary syndrome, organic valvular heart diseases, chronic inflammatory diseases, chronic lung diseases, or malignancy; those under dialysis; and current smokers. This is a sub-study of the prospective observational pilot study (UMIN-ID: 000014088), which was approved by the Juntendo University Hospital Institutional Review Board (#14-019), and the study complied with the ethical principles of the Declaration of Helsinki (as revised in 2013). Written informed consent was obtained from all participants.

Height and weight were measured in the morning of the day before starting the astaxanthin supplementation, and body mass index was computed. Blood pressure (BP) and heart rate (HR) were also measured at the same time. Blood samples were obtained in the morning after an overnight fast. Serum oxidative stress was assessed by the Diacron reactive oxygen metabolites (dROM) test, which measures the total oxidant capacity of samples relative to the chromogenic substrate N,N-diethyl-p-phenylenediamine. Total antioxidant capacity was assessed by the biological antioxidant potential (BAP) test, which measures the capacity of a sample to reduce ferric ions to ferrous ions with a thiocyanate derivative as a chromogen. A free radical analyzer system (Free Carrio Duo, Wismerll Company, Ltd., Tokyo, Japan) was used for dROM and BAP tests. The urinary oxidative stress marker measurement system, ICR-001 (Immunochromatography method, Techno Medica Co.) was used for urinary 8-hydroxy-2'-deoxyguanosine (8-OHdG) concentrations with a measurement of the urinary creatinine level. and the urinary 8-OHdG (ng/mL)/creatinine (mg/mL) ratio was reported. As inflammatory markers, in addition to the CRP, the serum levels of TNF-α were assayed using a high sensitive Enzyme-Linked ImmunoSorbent Assay kit (R&D Systems, Minneapolis, USA). The estimated glomerular ﬁltration rate was computed based on the serum level of creatinine (11). The plasma concentration of astaxanthin was measured via high-performance liquid chromatography whose details were previously described (12). For the cardiac function, the LVEF was assessed by the modified Simpson method. Echocardiographic studies were done and assessed by experienced sonographer and cardiologists who were blinded to the clinical data. Plasma B-type natriuretic peptide level was assessed.

As a self-report-based physical activity scale, we used the Specific Activity Scale (SAS) with all patients being asked 21 questions, as a measure of self-perceived exercise tolerance (13). SAS scores are expressed as metabolic equivalent (Mets). Most of the exercise tests were aiming to assess exercise performance around maximal workloads, but daily activities did not require energy expenditure in the maximal range. In this regard, the SAS allowed the expression of the extent of submaximal physical activities. The HRQoL was evaluated by the Short Form (SF)-8TM consisting of 8 questionnaires. The Japanese version of SF-8 was validated (14,15). There are eight subscales, such as physical functioning, role limitations due to physical problems (role-physical), bodily pain, general health perception, vitality, social functioning, role limitations due to emotional problems (role-emotional), and mental health. Two aggregate scores, the physical component summary (PCS) and mental component summary (MCS) scores, were computed from the eight subscales. These scores were computed by weighing each subscale (15). Scoring was based on the Japanese standards; the possible scores range from 0 to 100, with higher scores representing a better HRQoL (15).

Patients took astaxanthin supplement containing 12 mg of astaxanthin with 40 mg of tocotrienol (vitamin E) and 30 mg of L-ascorbic acid 2-glucoside (vitamin C) orally (AstaReal ACT, AstaReal Co., Ltd., Tokyo, Japan) for 3 months. No changes in other medications were allowed in the study periods. The measurements of body weight, systolic and diastolic BP, and HR were obtained at baseline and follow-up clinic visit. Blood sampling, LVEF assessment, and questionnaires (SAS and SF-8) were repeated at 3 months after starting astaxanthin supplementation.

Because no data regarding the effects of astaxanthin supplement in patients with HF were available, we did not compute the specific sample size and conduct the present study as a pilot study. Nevertheless, we planned to perform analysis at the time when ≥15 patients completed the 3-month follow-up period. Values are expressed as mean±SD unless indicated otherwise. The differences between the baseline and follow-up measurements were compared using the paired t-test for normally distributed data and the Wilcoxon signed-rank test for non-normally distributed data. Changes in parameters from baseline to 3 months (i.e., Δ) were computed as Δ = [(values at 3 months)−(values at baseline)] and expressed as %Δ [Δ/(values at baseline)×100], except for plasma astaxanthin concentration because astaxanthin was not detected at baseline in most participants. Relationships between the baseline parameters and %Δ in the SAS, PCS, and MCS scores and relationships across %Δ in parameters were assessed using the Pearson and Spearman correlation coefficients for normally and non-normally distributed data, respectively. A P value less than 0.05 indicated statistical significance. Analyses were performed by SPSS 23.0 (IBM Corp., Armonk, NY, USA).

Characteristics of all patients

Nineteen eligible patients were enrolled, all of whom had been diagnosed as HF and treated for at least 6 months at enrollment. However, 2 patients were excluded because of lost to follow-up. Thus, data of 17 patients (14 males, 3 females) who completed oxidative stress and inflammatory marker and LVEF assessments and questionnaires were analyzed. All other medications remained unchanged during the study period. Although 1 patient had worsening of spinal stenosis at follow-up, which was determined not to be related to astaxanthin supplementation, no other complaints or adverse events were observed. The baseline characteristics of these 17 patients are shown in Table 1. 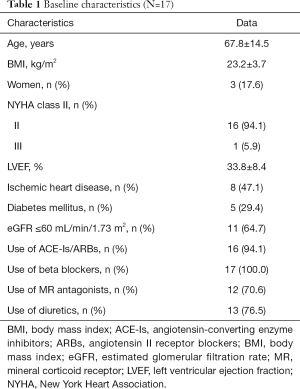 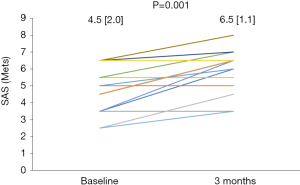 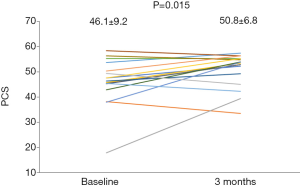 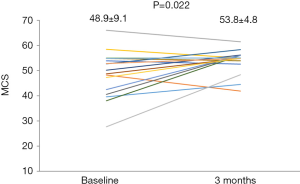 There was a significant direct relationship between %Δ in the SAS score and %Δ in the MCS score (r=0.595, P=0.012). However, no relationships were found across %Δ in other parameters.

In previous studies in animal models and human subjects, astaxanthin supplementation was shown to have direct and indirect effects through the suppression of oxidative stress on the myocardium and skeletal muscles and consequently may have potential to improve exercise performance in HF patients. Indeed, in our main study, we have shown that the 6-min walk distance increased significantly in patients with HF. In this sub-study, we found that the SAS score, which can allow the expression of the extent of submaximal physical activities, also increased significantly following 3-month astaxanthin supplementation. It is of great interest that patients with greater baseline HR were likely to have more improvement of the SAS score. This is supported by the facts that increased resting HR was associated with increased levels of several surrogate markers and poor clinical outcomes in patients with HF (16) and the reduction of resting HR in patients with HF by beta blockers or ivabradine improved exercise tolerance (17,18). In addition, it should be noted that lower baseline MCS scores could also be a predictor for greater improvement of the SAS score in patients.

Most studies regarding the effects of antioxidants failed to show the improvement of HRQoL in patients with HF except for a few studies (19-22). In this sub-study, we found improvements in both PCS and MCS scores following 3-month administration of antioxidants (i.e., astaxanthin). One possible explanation for such discrepancy between previous studies and ours may include differences in the type of antioxidants. As mentioned earlier, astaxanthin, one of the carotenoids, has a strong antioxidant effect (2), but unlike other carotenoids which simultaneously have anti- and pro- oxidative properties (23), astaxanthin shows solely antioxidative effects (23). Thus, the effects of astaxanthin may be different from other antioxidants and supposed to be greater than the previously investigated antioxidants. The improvements of PCS were more prominent in patients with HF with ischemic etiology in this sub-study. Based on the results of our sub-study, patients with HF with ischemic etiology may be considered as a potential candidate of astaxanthin supplementation to see an improvement of the physical activity and HRQoL in greater extent.

Funding: This study was supported by AstaReal Co., Ltd., and partly by a Grant-in-Aid for Scientiﬁc Research (Grant Number, 26507010); JSPS KAKENHI (Grant Number, JP17K09527); JSPS KAKENHI (Grant Number, JP18K15904); a grant to The Intractable Respiratory Diseases and Pulmonary Hypertension Research Group from the Ministry of Health, Labor and Welfare (H29-027); and MEXT*-Supported Program for the Strategic Research Foundation at Private Universities, 2014–2018 (*Ministry of Education, Culture, Sports, Science and Technology). These sources have no other roles in this study.

Reporting Checklist: The authors have completed the TREND reporting checklist. Available at http://dx.doi.org/10.21037/apm-20-1378

Ethical Statement: The authors are accountable for all aspects of the work in ensuring that questions related to the accuracy or integrity of any part of the work are appropriately investigated and resolved. This is a sub-study of the prospective observational pilot study (UMIN-ID: 000014088), which was approved by the Juntendo University Hospital Institutional Review Board (#14-019), and the study complied with the ethical principles of the Declaration of Helsinki (as revised in 2013). Written informed consent was obtained from all participants.