Application of procalcitonin, white blood cell count and neutrophil-to-lymphocyte ratio in the diagnosis of systemic lupus erythematosus with a bacterial infection

Systemic lupus erythematosus (SLE) is an autoimmune disease that affects multiple organs and multiple systems throughout the body, with common early signs and symptoms including fever, rash, pericarditis, arthritis, serous inflammation, and kidney damage (1). With the continuous development and progress of medical technology, the prognosis of SLE patients has been significantly improved, but the complications of SLE are still a severe problem in the clinic. Glucocorticoids and immunosuppressive agents are the primary drugs to treat SLE clinically. Although these agents can effectively alleviate the patient’s disease, they may also increase the risk of bacterial infection to a certain extent (2). Because the disease causes immune dysfunction, using hormones, and immunosuppressive agents in the course of SLE treatment, patients are often in an immunosuppressive state. Patients with SLE are prone to progress to be sepsis after bacterial infection, one of the primary causes of death in SLE patients clinically (3). SLE at the early stage is often accompanied by fever and other symptoms, which is difficult to distinguish from fever caused by bacterial infection. Therefore, it is necessary to find laboratory indicators that can be used for early differential diagnosis to improve the prognosis of patients (4). Studies have confirmed that serum procalcitonin (PCT) level increases abnormally during bacterial infection but does not increase or only slightly increases during viral infection or non-inflammatory reactions (5). White blood cell count (WBC) and neutrophil-to-lymphocyte ratio (NLR) are commonly used indicators for diagnosis of bacterial infections clinically, which also has the advantages of straightforward retrieval from routine blood examination, convenient sampling, with mature detection methods, and rapid results (6,7). Currently, there is no study on the combination of PCT, WBC and NLR in the diagnosis of SLE. This study innovatively analyzed the value of PCT, WBC and NLR in the differential diagnosis of SLE combined with bacterial infection, aiming to provide more evidence for the clinical diagnosis and treatment of patients. We present the following article in accordance with the STARD reporting checklist (available at http://dx.doi.org/10.21037/apm-20-1777).

The ethics committee approved this study of Daqing Oilfield General Hospital, and we selected 164 patients with SLE who were admitted to our hospital from January 2018 to December 2019 as the research subjects. All the patients met the diagnostic criteria of SLE diagnosis and management (8). Patients with other autoimmune diseases, tumors, severe heart, lung, and kidney diseases, or those with viral, fungal, and tuberculosis infections were excluded. Among the enrolled patients, there were 48 males and 116 females, aged from 20 to 78 years, with an average of (44.85±10.26) years. The course of the disease was from 10 months to 15 years, with an average disease course (5.68±2.62) years old. Also, 60 healthy volunteers with no allergic diseases, no family history of tumor diseases, and no immune deficiencies in the same period and at the similar ages were selected as the control group, including 15 males and 45 females, aged 22 to 75 years old, with an average of (45.24±8.72) years old. The research subjects all voluntarily signed informed consent. All procedures performed in this study involving human participants were in accordance with the Declaration of Helsinki (as revised in 2013).

Before antibiotic treatment, 3 mL of venous blood in the fasting state in the morning was collected and then centrifuged at 3,000 g, 4 °C for 15 min. Automatic biochemical analyzer (MODEL: AU5800, purchased from Beckman Coulter) was used to detect MIF and CRP levels. The VIDAS automatic fluorescence immunoassay instrument (Mérieux, France) was used to detect serum levels of RDW and PCT quantitatively. And the automatic blood cell analyzer (Optoelectronics, Japan) was used to detect the levels of WBC, NEUT, and LYMPH, and the NLR ratio (NEUT/LYMPH) was calculated.

All data were analyzed using the SPSS19.0 software (IBM, USA). Count data was expressed as case (%), and analyzed by Chi-squared test. The levels of PCT, WBC, and NLR were expressed as mean ± standard deviation and analyzed by the t-test. Logistic regression analysis was performed for multivariate analysis. The receiver operating characteristic (ROC) curve of research subjects was drawn to analyze the differential diagnosis value of PCT, WBC, and NLR in SLE with a bacterial infection. Results with P<0.05 were considered statistically significant.

The results of bacterial culture showed that there were 46 cases of bacterial infection. And there was no significant difference in the general data, including gender, age, disease course of SLE patients in the three groups (P>0.05, Table 1).

Comparison of indicator levels in the three groups

Independent variables of multivariate analysis were selected as the above statistically significant variables, which could be directly input as they were all measurement data. The results showed that PCT, WBC and NLR were independent risk factors for SLE combined with bacterial infection (P< 0.05, Table 3).

Application value of PCT, WBC, NLR in the differential diagnosis of SLE with a bacterial infection

Table 4 Analysis of PCT, WBC, NLR and their combination in the differential diagnosis of SLE patients combined with a bacterial infection
Full table 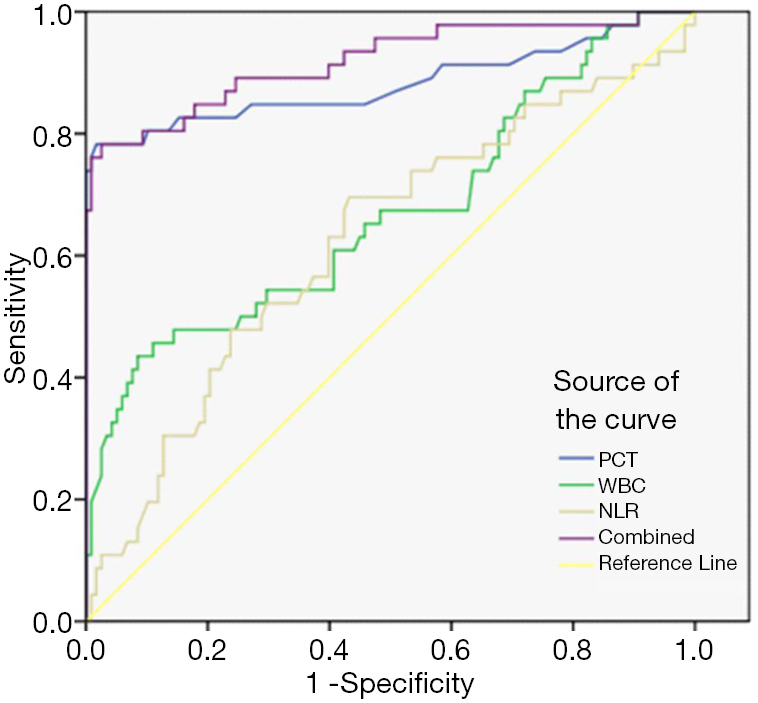 Changes in the levels of PCT, WBC and NLR in the bacterial infection group before and after treatment

The levels of PCT, WBC, and NLR gradually decreased with the progress of treatment, and the difference before and after treatment was statistically significant (P<0.05, Table 5).

Table 5 Changes of PCT, WBC and NLR levels in the bacterial infection group before and after treatment
Full table

SLE is a common autoimmune disease. The etiology and mechanism of SLE are complex and have not yet been fully understood, mostly believed to be related to the imbalance of the patient’s peripheral immune tolerance (9). SLE is a disease with an imbalance of the body’s immune tolerance function, which can lead to the activation and proliferation of auto-reactive T lymphocytes and B lymphocytes of the immune system. And the neutrophils and macrophages promote the vicious circle of inflammatory injury (10). With the improvement of diagnosis and treatment methods, the prognosis of SLE has been significantly improved, but the clinical manifestations of SLE are like a bacterial infection in many aspects. Patients with SLE are often in the status of immunosuppressing for the immune disorder caused by SLE itself, or by the hormones used during the treatment of the disease. Therefore, once there are bacterial infections in SLE patients, patients are more likely to progress to get sepsis, causing many deaths by infection and the no reduction of mortality of SLE (11). Combined bacterial infection has become a common reason for clinical death in SLE patients. Therefore, the differential diagnosis of SLE combined with bacterial infection has become a clinical problem that needs to be solved urgently.

However, the increase is almost no or not obvious when patients are with viral infections, tumors, and other diseases combined with fever. Therefore, several studies suggest that PCT could be used as a sensitive indicator for the early differential diagnosis of bacterial infections (15,16). The increase of PCT concentration is not affected by the immunosuppressive state of the body, and the plasma PCT concentration will be significantly increased even if the patient is in the immunosuppressive state or there is no obvious clinical manifestation. Therefore, PCT is also of good diagnostic value for patients with SLE complicated with bacterial infection and stable period without fever.

To sum up, although there are many studies on SLE combined with bacterial infections, opinions and conclusions are not uniform. The treatment of SLE is always with immunosuppressants and hormones, which are always double-edged swords for SLE patients. Therefore, clinicians should grasp the balance of the primary disease controlling and the infection risk. Indicators, including PCT, WBC, and NLR, may be used as monitoring indicators for the diagnosis and treatment of SLE patients combined with a bacterial infection. However, the sample size of this study is small, and it is a non-multicenter study, which has certain limitations. It still needs to be further demonstrated and improved in the next large-scale and multicenter study.

Reporting Checklist: The authors have completed the STARD reporting checklist. Available at http://dx.doi.org/10.21037/apm-20-1777

Conflicts of Interest: All authors have completed the ICMJE uniform disclosure form (available at http://dx.doi.org/10.21037/apm-20-1777). The authors have no conflicts of interest to declare.

Ethical Statement: The authors are accountable for all aspects of the work in ensuring that questions related to the accuracy or integrity of any part of the work are appropriately investigated and resolved. The study of Daqing Oilfield General Hospital was approved by ethics committee. All procedures performed in this study involving human participants were in accordance with the Declaration of Helsinki (as revised in 2013). Signed informed consent was taken from all patients.