Esophagectomy is the primary treatment for early stage and locoregionally advanced esophageal cancer. Anastomotic leak is a relatively common complication and its incidence is known to be 10–25% for cervical anastomosis and 3–25% for intrathoracic anastomosis (1). Further, anastomosis leak is associated with high rates of morbidity and mortality. Treatment options include close observation, surgical re-intervention, endoscopic stenting, and endoscopic vacuum therapy (EVT). EVT has been reported to be a feasible primary treatment of esophageal perforations and leaks (2).

Currently, there are no anesthesia guidelines for EVT, however, it is usually performed under general anesthesia with endotracheal intubation (3). Here, we report a case of successful EVT under monitored anesthesia care (MAC) without any complications. We present the following article in accordance with the CARE reporting checklist (available at http://dx.doi.org/10.21037/apm-20-1394).

Written informed consent was obtained from the patient prior to EVT and the study conformed to the provisions of the Declaration of Helsinki (as revised in 2013). A 64-year-old male (height: 167.5 cm, weight: 57.4 kg) who was diagnosed with upper esophageal cancer and hypopharyngeal cancer underwent an Ivor-Lewis operation with cervical anastomosis and laryngomicrosurgery. Video-assisted thoracoscopic surgery for exploration and vacuum assisted closure (VAC) were performed under general anesthesia on the 10th postoperative day (POD) because of cervical anastomosis site leakage. After the first leakage site closure, incision and drainage and VAC-device changes were performed seven times under general anesthesia including endotracheal intubation (Figure 1). Nevertheless, there was no further improvement, and EVT was scheduled.

Figure 1 Timeline in this patient. Video-assisted thoracoscopic surgery for exploration and vacuum assisted closure (VAC) were performed under general anesthesia on the POD 10. After the first leakage site closure, incision and drainage and VAC-device changes were performed seven times under general anesthesia including endotracheal intubation. The patient was discharged on the 78th POD without any other complications. POD, postoperative day; MAC, monitored anesthesia care.

Although EVT was attempted under sedation with midazolam in an endoscopy room, the procedure was discontinued because the oxygen saturation decreased. EVT was scheduled under MAC at the request of a thoracic surgeon and medical doctor, as EVT was expected to lead to patient discomfort and difficult airway.

After entering the operating room, the hemodynamic status of the patient was stable; his blood pressure was 109/75 mmHg, his heart rate was 89 beats/min, and his oxygen saturation was 96%. We explained the anesthesia method to the patient and prepared devices for airway management such as an oral airway, laryngeal mask airway, endotracheal tube, direct laryngoscope, and video laryngoscope. Dexmedetomidine was administrated intravenously for about 10 minutes with 60 mcg under 3 L/min of oxygen supply via a nasal cannula, and was infused at a rate of 1 mcg/kg/hour after the patient was appropriately sedated and his respiratory status had been checked. Remifentanil was also continuously infused (1 ng/mL; effect-site concentration) using a target-controlled infusion (TCI) pump. When the gastrointestinal endoscope was inserted into the EVT site for exploration, there was a lot of movement and repeated gag reflexes from the patient. Next, 2 mcg/mL of 2% propofol and 1.5 ng/mL of remifentanil were infused using TCI, and the administration of dexmedetomidine was stopped. EVT was performed successfully, because there was no respiratory depression or patient movement (Figure 2A,B). 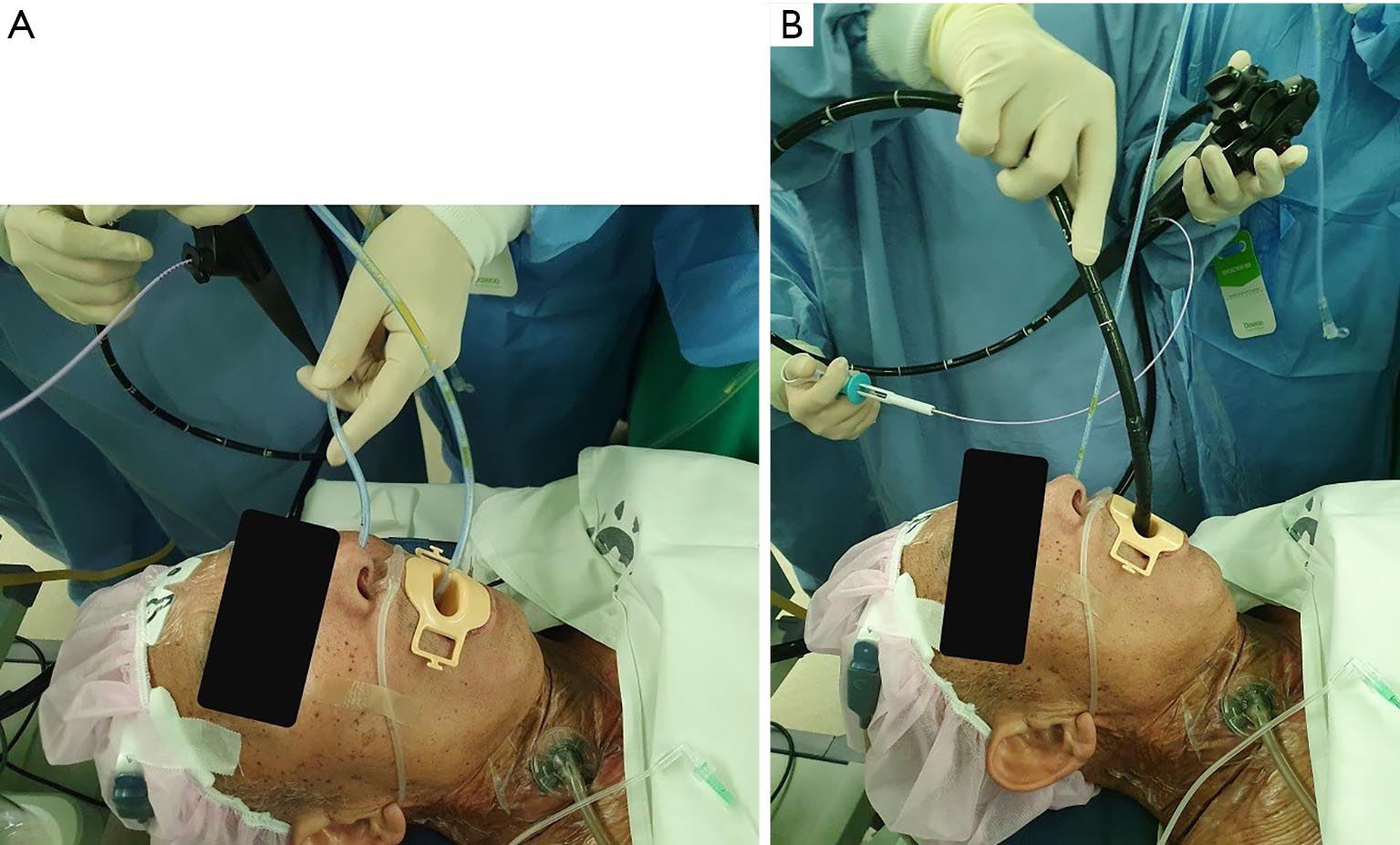 Figure 2 Endoscopic vacuum therapy (EVT). (A) A nasogastric tube is inserted via the nose and brought out through the mouth; (B) the endoscope was inserted with intracavitary placement of the tip of a size-adjusted polyurethane sponge sutured to a nasogastric tube.

The oxygen saturation was maintained at 96–99%, with 30 mmHg of end-tidal carbon dioxide and a 60–63 bispectral index. The duration of the procedure was 50 minutes, and the total duration of anesthesia was 1 hour. Intravenous ketorolac (30 mg) was administered at the end of the operation and the patient was transferred into the post-anesthesia care unit after confirmation of his alertness and spontaneous breathing. The patient was discharged on the 78th POD without any other complications (Figure 1).

Although esophagectomy is a standard treatment for esophageal cancer, the incidence rate of anastomotic leak is reported to be up to 50% after esophagectomy (4). Anastomotic leak is sometimes asymptomatic, but may cause fulminant sepsis, contamination of the pleural space, and gastric necrosis in severe cases. In addition, anastomotic leak is the most important and feared complication, and is associated with prolonged hospital stay, stricture formation, and postoperative dysphagia (1). In addition, it accounts for approximately 40% of postoperative mortality (5).

The incidence and severity of anastomotic leaks vary depending on the conduit type, anastomotic location, and the patient's preoperative functional status. Thoracic anastomotic leaks may progress to mediastinitis and sepsis, which may require percutaneous or surgical drainage, and even a thoracotomy. However, thoracic anastomotic leaks can usually be managed with conservative treatment (4). Cervical anastomosis, on the other hand, is associated with higher rates of leaks because of the subclinical vascular insufficiency of the conduit. However, it has lower mortality rate. Cervical leaks are drained through cervical incisions, usually confined to the neck, and are thus not associated with systemic sepsis. Therefore, treatment with antibiotics or daily bedside dressing changes are sufficient in most cases. However, if the amount of the leak is significant, nasogastric decompression and nutritional support may be required, and decortication or resection with diversion should be considered when the drainage alone is not sufficient to control the leakage (1).

EVT is performed by applying negative pressure by fixing a size-adjusted polyurethane sponge at the end of a nasogastric tube, grasping the sponge with a forcep using an endoscope, and placing the sponge on the lesion. Negative pressure through EVT could promote effective drainage of the leak cavity and collapse the cavity to control the source of infection. In addition to those factors, modulation of the cytokine response and angiogenesis improves tissue healing and repair (6). Recent report has found that EVT is effective for the management of postsurgical esophageal leakage (7).

EVT can be used in cervical anastomosis leaks, however, airway irritation can cause severe coughing, shortness of breath, hypoxia, and difficulty performing the procedure. In both studies by Still et al., who found that EVT was useful esophageal perforations and leaks, the procedures were performed under general anesthesia with endotracheal intubation to ensure airway protection (3). Kuehn et al. was the first to recommend general anesthesia for the first time EVT is performed to ensure the respiratory tract is protected (2).

In this case, the patient had oxygen desaturation during EVT of the first cervical site under sedation. Furthermore, the thoracic surgeon was concerned about the possibility of dyspnea and hypoxia even after the procedure. Therefore, MAC was planned because general anesthesia with endotracheal intubation can mask the signs of respiratory distress associated with the surgical site. According to the American Society of Anesthesiologists, MAC is defined as a planned procedure where a qualified anesthesia provider monitors the vital signs while administering appropriate medications including sedatives or analgesics and providing services related to the patient’s comfort during the procedure. Although side effects such as sympatholysis, respiratory depression, and delayed emergence can be avoided with MAC compared to general anesthesia (8), patients under MAC should be monitored and managed at the same level as regional or general anesthesia, and inhaled oxygen should be supplied during procedures. In addition, continuous and cautious monitoring of respiration, circulation, and body temperature is essential because airway obstruction, hypoxia, and even lung aspiration can occur during procedure.

In the case of a postsurgical esophageal leakage at the cervical region, especially if EVT is being performed for the first time, it is recommended that the patient be sedated with general anesthesia for the safety of the patient and the ease of the procedure by securing the airway. However, the procedure can be successfully performed with MAC when there is request from surgeon or medical doctor for the safety of the patient. For a successful procedure under MAC, understanding the general condition of the patient, cooperation with the patient and the surgeon, and providing continuous oxygen supply to the patient are necessary. Equipment for airway management should be prepared because respiratory distress could occur due to airway stimulation following EVT.

Funding: This work was supported by a 2020 research grant from Pusan National University Yangsan Hospital.

Reporting Checklist: The authors have completed the CARE reporting checklist. Available at http://dx.doi.org/10.21037/apm-20-1394

Conflicts of Interest: All authors have completed the ICMJE uniform disclosure form (available at http://dx.doi.org/10.21037/apm-20-1394). The authors have no conflicts of interest to declare.

Ethical Statement: The authors are accountable for all aspects of the work in ensuring that questions related to the accuracy or integrity of any part of the work are appropriately investigated and resolved. Written informed consent was obtained from the patient and the study conformed to the provisions of the Declaration of Helsinki (as revised in 2013).