In the February issue of Pain, Brown et al. reported their investigation into the potential cognitive mechanism underlying tactile sensory deficits in patients with complex regional pain syndrome (CRPS) (1). Their study was based on the hierarchical predictive coding (HPC) model of perception: sensory inputs can be predicted and explained by higher-order probability-related knowledge. They used a tactile-spatial oddball task and hierarchical Bayesian model for predictive coding, hypothesizing that statistical learning of the prediction of sensory change would be suboptimal in patients with CRPS. Their results demonstrated that the patients’ predictions were less precise and less finely tuned to the statistics of the environment, providing evidence of top-down predictive impairment in patients with CRPS.

The main strength of this study is that it was the first study to use a generative mechanistic model to investigate tactile perception in chronic pain disorders. Tactile sensory deficits in chronic pain conditions have been studied using different tasks that measure the ability to discriminate, identify, or localize tactile stimuli (2). Previous findings revealed that tactile spatial acuity was decreased in different pain conditions, including hand dystonia, chronic low back pain, arthritis, and CRPS (2,3). Moreover, this tactile impairment is known to be associated with the reorganization of the primary and secondary somatosensory cortex; the reduced hemodynamic signal during electrical stimulation of the index fingers of the affected hand was linked to impaired tactile discrimination and individual pain intensity in patients with CRPS (4).

The tactile spatial oddball task was first validated by the study conducted by Brown et al. In the oddball paradigm, digital ring electrode pairs were placed on each digit of the patients’ fingers. Patients were required to respond if they detected a shift in electrical stimulation from one digit to another. The probability of tactile spatial change varies across different blocks such that oddballs could occur with a probability of 10%, 30%, or 50%. From the theoretical perspective of HPC, unpredicted and surprising sensory inputs (i.e., the occurrence of oddball) are propagated as prediction errors from low- to high-level cortical regions. Neurophysiological studies have shown that tactile awareness relies on recurrent neural processing (feedback – feedforward loop) within the somatosensory network (5), and mismatched responses to tactile stimuli reflect hierarchical Bayesian inference in somatosensory and limbic areas in a roving tactile oddball task (6). In addition, a recent neuroimaging study revealed that unexpected and surprising tactile changes increase the connectivity within a caudal-to-rostral ascending hierarchy of somatosensory, limbic, and prefrontal areas, and that hierarchical processing of tactile prediction error may be coordinated by anterior insula (7).

Furthermore, the authors modeled and simulated the manner in which the statistical structure of the environment might be internally represented and updated, by applying hierarchical Bayesian inference and a computational model of predictive coding to a tactile-spatial change-detection task. From the perspective of the Bayesian model, the participants’ estimation of the probability of a change in the location of the stimulus are not fixed but constantly updated with time, according to the prediction errors and their precision weights. Thus, trial-by-trial analysis can provide information on history-dependent statistical learning, which can be ignored in condition-averaged data. This trial-wise approach provides significant methodological advances, compared to earlier research, and such an approach to the investigation into the role of higher-order statistical learning in perceptual disturbances in CRPS is highly interesting. This novel and advanced methodology is expected to contribute to a better understanding of the pathophysiological mechanisms underlying CRPS.

Their study reveals some insights into establishing a therapeutic strategy for CRPS. Sensory retraining involves simple tasks such as tactile discrimination, but it does not aim to enhance adaptive, flexible top-down learning. It is well known that patients with cognitive impairments are less able to communicate clearly about their pain. In effect, decreased cognitive flexibility was shown to negatively affects the ability to use cognitive restructuring for the treatment of anxiety, although diminished cognitive flexibility does not necessarily prevent patients from benefitting from cognitive behavioral therapy (8). Individual cognitive function may be a useful clinical marker to help establish therapeutic strategy and predict the treatment efficacy for patients, though more evidence is required to consider this cognitive mechanism in the treatment of pain.

As the authors stated, statistical learning allows individuals to make predictions and facilitates adaptive behavior. The ability to extract patterns or regularities from constantly changing internal sensations or the environment is important while living with chronic pain, which largely depends on an individual’s cognitive function. Impaired cognitive ability has been evaluated by measuring executive function, which supports the capacity to regulate thoughts, feelings, and behavior (9). As executive functions largely coordinated by the prefrontal cortex (PFC), damage to the PFC is known to result in deficits in organizing and executing appropriate behavior, such as perseveration, poor judgment, interference with problem solving, and disinhibition. Our previous study also demonstrated the frontal abnormalities associated with CRPS (10); we observed cortical thinning in the PFC, especially in the dorsolateral and ventromedial PFC, in patients with CRPS.

Patients with other chronic pain disorders consistently exhibit impairments in cognitive flexibility, which is required for higher-level knowledge. For example, the ability to adapt to and utilize constantly changing rules, which are measured by the Wisconsin Card Sorting Test (WCST), has been found to be impaired in patients with a variety of pain conditions (Table 1). Moreover, patients with numerous pain conditions perform poorly on the Trail Making Test-B (TMT-B), which is known to reflect attentional shifting and task switching (Table 1). The WCST and TMT-B are used frequently to evaluate executive function. They are known to mainly map into the dorsolateral PFC, which is consistent with the notion that chronic pain may affect the PFC. Therefore, these findings provide additional evidence of impaired executive functions in several pain conditions, which may be associated with higher-level predictive impairment in patients with chronic pain. 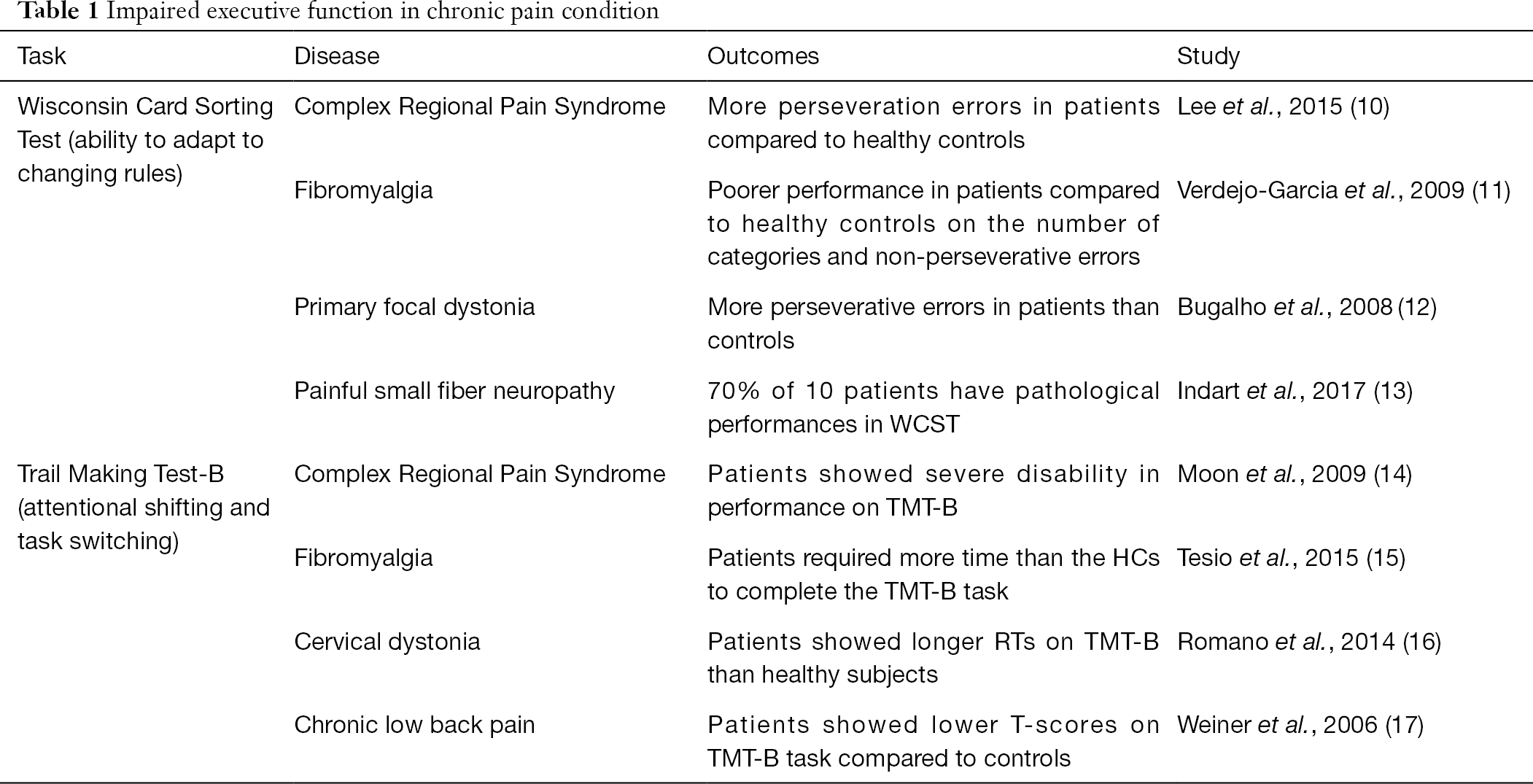 Moreover, our recent unpublished study found impaired mental rotation ability in patients with CRPS. When presented with a picture of the hand or foot and required to judge its laterality (left or right), their performance was selectively impaired, according to their bodily state: patients with upper limb pain showed slower responses to hand stimuli than foot stimuli, while patients with lower limb pain showed the opposite pattern (Figure 1). Body representation involves different sources of top-down and bottom-up information. Our findings may imply that prior knowledge learnt from persistent pain in the affected body part may hinder patients’ performance on mentally rotating the corresponding stimuli. Given that thinking about movement increase pain and swelling in patients with CRPS (18) which may be modulated by beliefs about pain and movement, it is possible that pain expectation negatively affects top-down processing of hand and foot stimuli. These findings augment and support the role of top-down processing in perception as in Brown et al. (1). 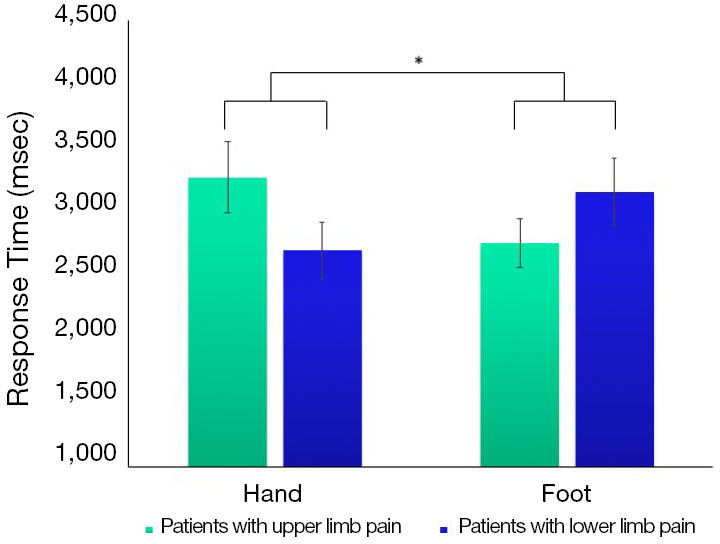 Recent views propose that predictive mechanisms may play a potential role in social cognition such as theory of mind (ToM), which inherently requires predictive skills (19). Our previous study found potential difficulties in social interaction in CRPS; patients were less accurate in inferring another person’s emotional and mental state from eye expressions compared to healthy controls (20) and exhibited a lower tendency of perspective-taking, i.e., the ability to view something from the psychological point of view of others (21). Deficits in the ToM might impair mental representation of emotions, which in turn leads to somatoform symptoms (22,23). Moreover, patients with CPRS showed significantly lower empathic concern, feelings of sympathy and concern for others, compared to healthy controls (21). In addition, the level of empathic concern was associated with the severity of pain. Impaired social prediction in chronic pain has not been investigated yet. Further research is needed with individuals with chronic pain to understand the mechanism by which these factors may affect the progress and prognosis of the disease.

In conclusion, this study, with a novel theoretical approach and advanced statistical method, contributes to a more integrated understanding of the pathophysiological mechanisms underlying perceptual deficits in CRPS. However, as the authors stated, their results do not specify a somatosensory-specific deficit in patients with CRPS. First, although a novel tactile-spatial change-detection task was employed in their study, the abnormality of the top-down neurocognitive function in CRPS has already been robustly reported. Second, considering the abnormality in the insula and its connection to multiple brain regions in the neural network of perception, there may be some statistical difficulties in distinguishing the somatotopic abnormality of the insula from the somatosensory components involved in interoception and body schema. The existing data are not sufficient to confirm whether Brown et al.’s results can be solely attributed to a somatosensory-specific deficit in CRPS. Future studies should expand the discussion on the neurocognitive mechanisms underlying the perceptual disturbances in CRPS.

Funding: This work was supported by the National Research Foundation of Korea (NRF) grant funded by the Korea government (MSIT) (No. NRF-2018R1A2B6001806).

Provenance and Peer Review: This article was commissioned by the editorial office, Annals of Palliative Medicine. The article did not undergo external peer review.

Conflicts of Interest: Both authors have completed the ICMJE uniform disclosure form (available at http://dx.doi.org/10.21037/apm-20-900). The authors have no conflicts of interest to declare.