Fabry disease (FD) is an X-linked glycosphingolipid storage disorder caused by mutations in the α-galactosidase A gene (GLA) (1). Human GLA maps to chromosome Xq22, and its genomic sequence and full length cDNA have been characterized (2). To date, over 800 mutations in the human gene mutation database (http://fabry-database.org) are described as causative of FD. Male patients with the classic form develop early sign and symptoms in childhood or adolescence (3). This classic form typically appears in male carriers of genetic variants that cause a severe decrease (or complete absence) of the residual enzyme activity, as occurs with nonsense and frameshift variants (4). Females are heterozygous for mutations in the GLA gene and show a heterogenous clinical spectrum that ranges from asymptomatic to a clinical severity equal to that of males (5). The typical presenting symptoms in hemizygous males include angiokeratomas, acroparesthesias due to peripheral neuropathy, episodic pain crises, lenticular and corneal opacities. Cardiac involvement takes a progressive course and is characterized by left ventricular hypertrophy and conduction abnormalities. Kidneys are almost always affected, and renal dysfunction gradually worsens and limits the life span of hemizygous Fabry males, who often require hemodialysis or renal transplantation in their fourth or fifth decade of life (6). However, a male FD patient who developed a relatively mild phenotype despite carrying a classic nonsense GLA variant should be considered somatic mutation (7).

Here, we report a case of male FD patient caused by a de novo somatic mosaicism with mild symptoms despite classic GLA variant. We present the following article in accordance with the CARE Reporting Checklist (available at http://dx.doi.org/10.21037/apm-19-635).

In late 1992, a 34-year-old male patient visited with proteinuria. Renal biopsy was performed and microscopic findings showed glomerular capillary walls were thin and delicate with opened lumen and foamy vacuolization containing PAS and silver positive particles. Electron microscopic reports showed lamellated lysosomal inclusions in the glomerular mesangium, Bowman’s capsule, tubules, and interstitium; findings consistent with FD (Figure 1). The patient was then lost to follow-up for 17 years until 2010 when he revisited the hospital (aged 51 years). His visiting purpose was enzyme replacement therapy for FD. He got the information which enzyme replacement therapy (ERT) was now available in South Korea form magazine. No specific clinical or laboratory findings were found (serum creatinine 0.9 mg/dL, no proteinuria). Electrocardiogram revealed sinus rhythm with 1st degree AV block. Echocardiogram showed normal chamber size with increased wall thickness (interventricular septal dimension, IVSd =16.6 mm). GLA[NM_000169.2] c.820=/G>C in exon 6 (Figure 2). This mutation results in a substitution of the amino acid in position 274 from glycine to arginine. The mutated allele for p.Gly274Arg mutation has not been reported in publicly available variants databases of Exome Sequencing Project, 1000 Genomes Project, and Exome Aggregation Consortium. However, it has been registered as a classic FD mutation in International Fabry Disease Genotype-Phenotype Database (dbFGP), describing that affected males, the median α-Gal A enzyme activity in plasma is 0.00 nmol/h/mL, the median α-Gal A enzyme activity in leukocytes is 0.00 (8). Furthermore, different amino acid changes at p.Gly274 [p.Gly274Ser (9), p. Gly274Val (10)] were reported as pathogenic mutations for FD, suggesting that the amino acid, Glycine, in position 274 might have an essential role in the protein function. After the diagnosis of FD was confirmed, the patient began receiving enzyme replacement therapy (agalsidase-β, Fabrazyme®, 1.0 mg/kg biweekly) and this has continued for 9 years until now (Figure 3). During follow-up, his renal function was stable (serum creatinine 1.0 mg/dL) with mild albuminuria (123 mg/g Cr). Echocardiogram showed normal chamber size with increased wall thickness (IVSd =22.8 mm). Ophthalmic examination revealed vortex whorl like corneal opacity and conjunctival vascular tortuosity. The most recent plasma Gb3 was 6.4 µg/mL (normal range, 3.9–9.9), urine Gb3 was 0.20 µg/mg Cr (normal range, 0.01–0.90) and plasma lyso-Gb3 was 9.20 ng/mL (normal range, <1.74). 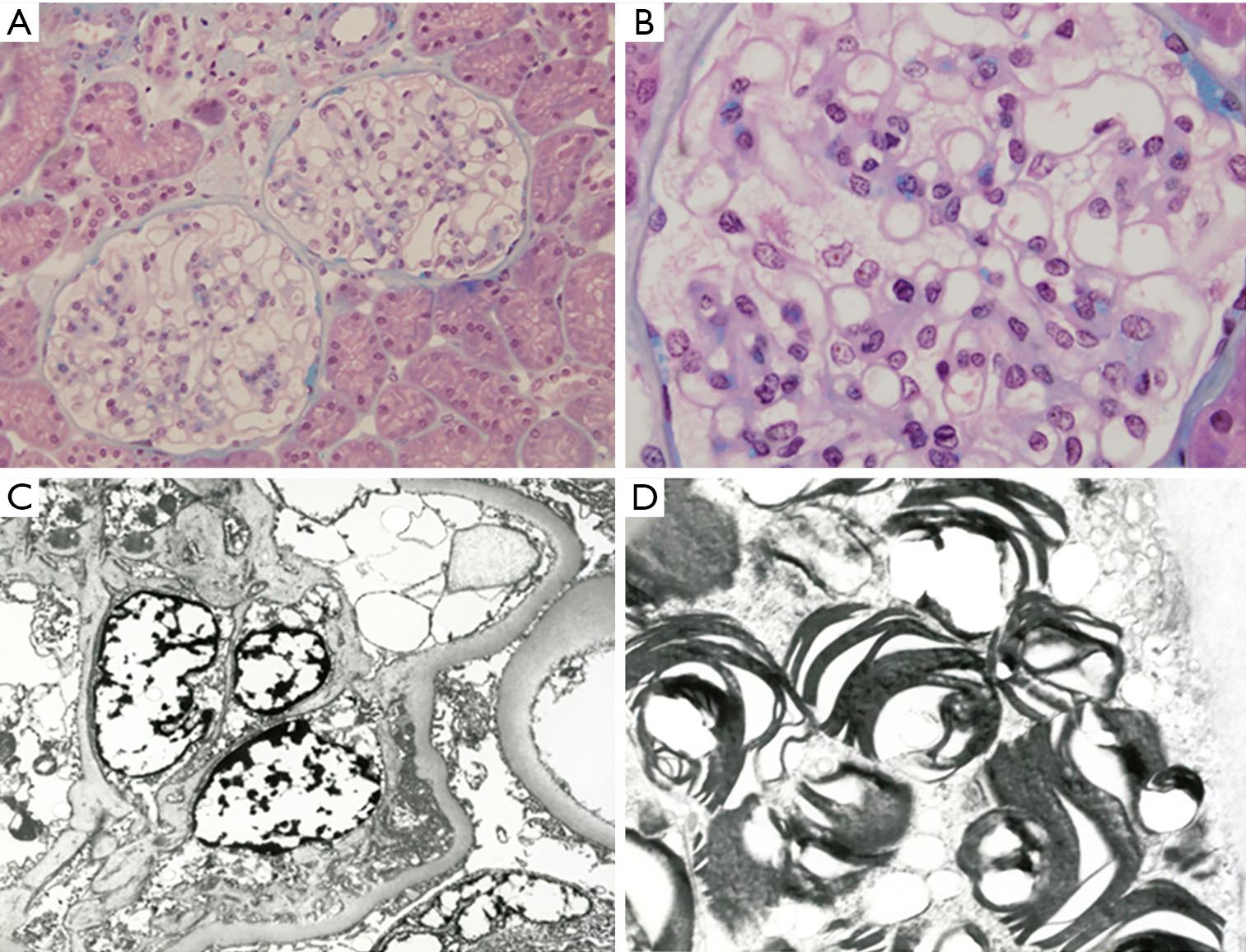 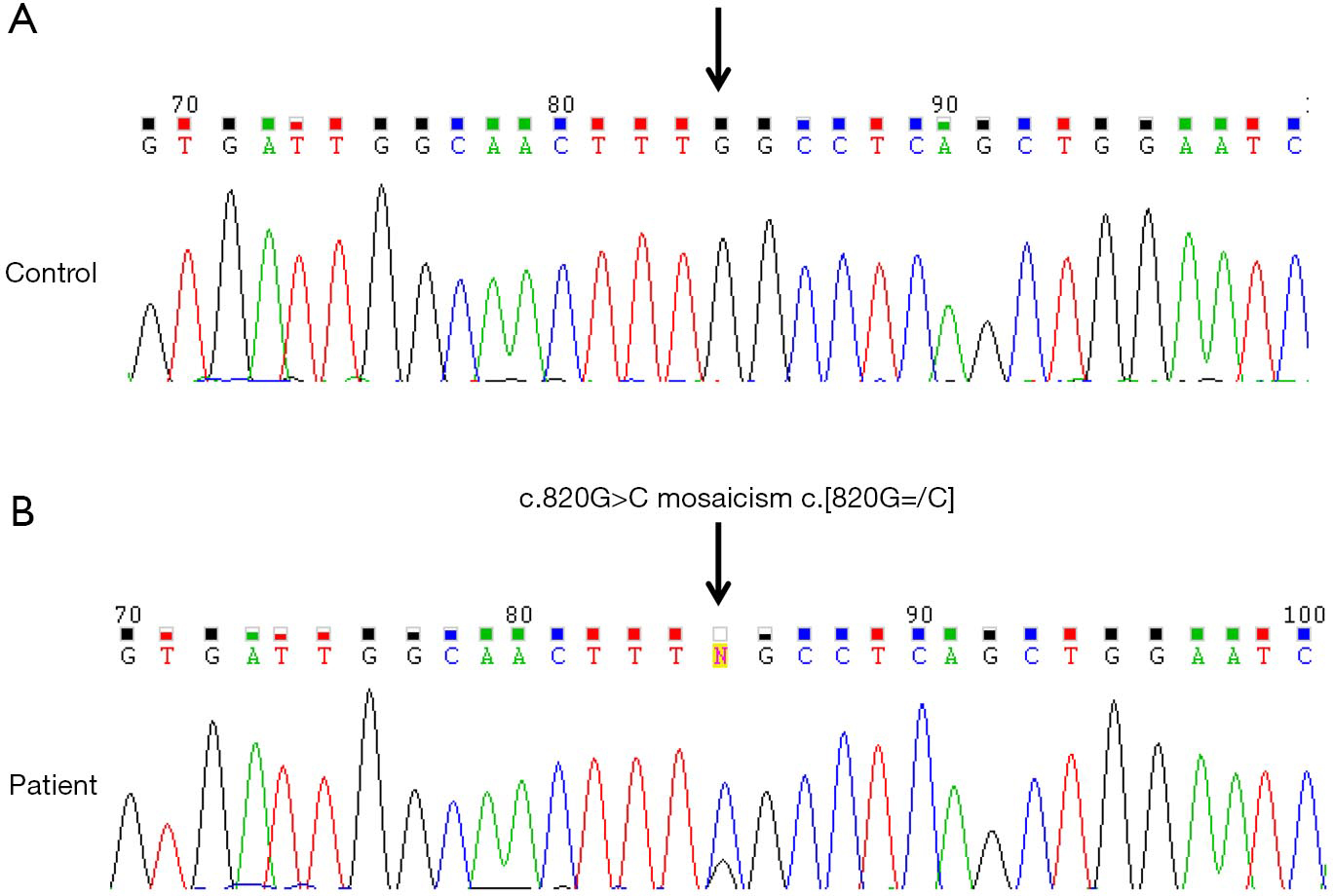 Recently, we performed a leukocyte α-galactosidase activity assay and DNA sequence analysis of other family members, which showed no abnormal findings in the patient’s daughter or older sister. No family members showed FD-related symptoms, and the daughter of the patient was also tested for paternity and was identified as a real biological daughter, but interestingly DNA sequence analysis showed no mutation (Figure 4).

This FD patients showed late-onset, mild phenotype despite classical GLA mutation and without familial history. Since both the family pedigree analysis and Sanger sequencing analysis using DNA isolated from peripheral leukocytes suggested presence of somatic mosaicism, we further investigated to determine the level of mosaicism in different cells. Targeted lysosomal storage disease panel testing including the GLA gene using next generation sequencing with ×500 depth was conducted in buccal swab sample, blood, and urine. It turned out that 58% of the readings had the mutated allele in buccal cells, 84% in blood, and 85% in urine, when 100% should be expecte91d in a hemizygous affected male confirming the presence of somatic mosaicisms (Figure 5). His karyotype revealed 46, XY. 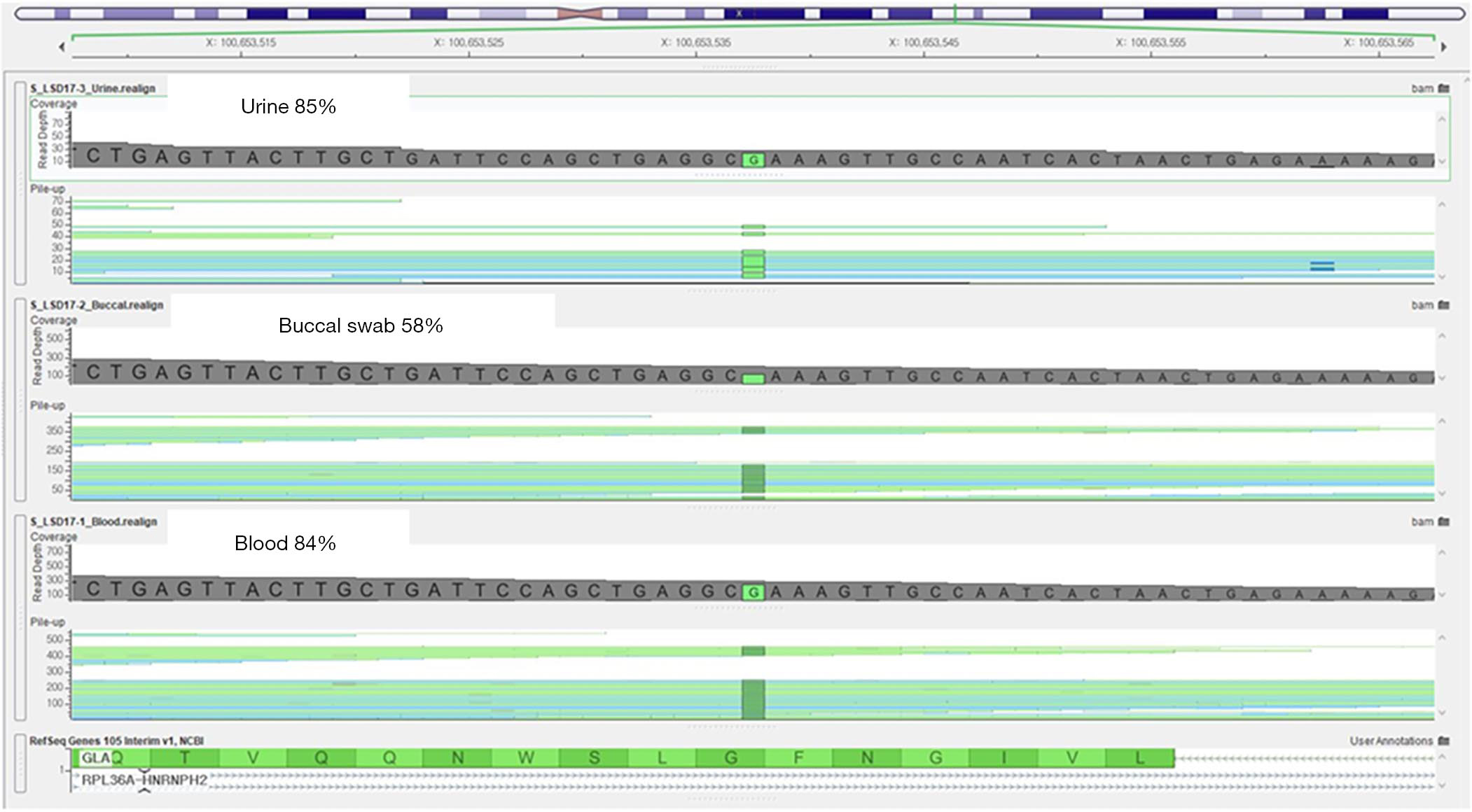 Figure 5 The level of mosaicism of c.820G>C mutation, determined by readings obtained in the next-generation sequencing analysis of urine (85%), buccal swab (58%) and blood (84%).

All procedures performed in studies involving human participants were in accordance with the Helsinki Declaration (as revised in 2013). Signed informed consent was obtained from the patient, and the study was approved by the Health Research Ethics Board of Chonnam National University Hospital.

Although diagnosis and management of FD have markedly improved over the years, the heterogeneity of its manifestations causes a high degree of variation in its clinical symptoms, both in hemizygous and heterozygous (8).

In this study, we identified a novel mutation of GLA gene that leads to a FD without family history. DNA sequencing revealed, in comparison with the wild-type sequence, c.820=/G>C. This mutation results in a substitution of the amino acid in position 274 from glycine to arginine. The mutation at the same position with different amino acids, p.Gly274Ser and p.Gly274Val has been reported as causative of FD (9,10). This change resulted in, arginine instead of glycine, the production of a nonfunctional protein or the absence of the gene product.

Affected patients are at high risk of developing a small-fiber neuropathy, proteinuric progressive kidney disease, cardiac abnormality and cerebrovascular disease (11). However, the patient displayed only mild proteinuria and left ventricular hypertrophy in our study, even though he had history of acroparesthesia during his high school period on medical record. The mechanisms of this mild organ involvement might be explained with this mosaic mutation and renal replacement therapy effect. Although the level of GLA enzyme activity as measured by the leukocyte α-galactosidase enzyme assay may not be perfectly correlated with the severity of the disease, this patients showed relatively high residual enzyme activity [5.3 nmol/h/mg (normal range, 25–126)] compared to others FD patients and this may be due to somatic mosaicism.

In this case, female offspring would inherit the mutation depending on whether the mosaicism is present in the germ cells of the patient or not. In the first case (a germinal mosaicism is present) the risk of inheriting the mutation in females is related to the proportion of mutated sperm (12). Unfortunately, this cannot be determined in this patient, because genetic testing was not performed on sperm tissue and the only genotyped daughter is a non-carrier of the variant. Therefore, even in classic GLA mutation, de novo somatic mutation should be considered when the clinical manifestation is mild or there is no family history.

Funding: This research was supported by the Bio & Medical Development Program of the National Research Foundation (NRF) funded by the Korean government (MSIT) (2017M3A9E8023001), and by a grant (CRI18021-1&20076) of Chonnam National University Hospital Biomedical Research Institute.

Conflicts of Interest: All authors have completed the ICMJE uniform disclosure form (available at http://dx.doi.org/10.21037/apm-19-635). The authors have no conflicts of interest to declare.

Ethical Statement: The authors are accountable for all aspects of the work in ensuring that questions related to the accuracy or integrity of any part of the work are appropriately investigated and resolved. All procedures performed in studies involving human participants were in accordance with the Helsinki Declaration (as revised in 2013). Signed informed consent was obtained from the patient, and the study was approved by the Health Research Ethics Board of Chonnam National University Hospital.