Pneumonia caused by crizotinib: case report and review of literature

The recent discovery of driver mutation, such as epidermal growth factor receptor mutations and anaplastic lymphoma kinase (ALK) rearrangements, has dramatically changed the treatment of non-small cell lung cancer (NSCLC). With an occurrence rate of 3–10%, the significance of ALK rearrangement in NSCLC is notable (1). Crizotinib is recommended for ALK positive NSCLC patients by the National Comprehensive Cancer Network (NCCN) Guideline Version 3. 2018, because of 60% overall response rate (ORR) and median progression-free survival (PFS) time of 8–10 months (2). However, some common adverse events are observed, such as nausea, diarrhea and weakness (3). Since there have only been a few cases applying this drug, fewer side effects have been reported. An ALK-rearranged patient was administered with Crizotinib as a targeted therapy to check the efficacy levels. The efficacy was notably positive with a small glitch—a rare drug-induced level 4 interstitial pneumonia contracted the patient (4). We present the following case in accordance with the CARE Reporting Checklist (5) (available at http://dx.doi.org/10.21037/apm-19-420).

Figure 1 Timeline of the patient’s therapy.

Because of the aggravated side effects, the patient refused to take systemic chemotherapy. However, the primary lesion of left lung still existed and metastases developed in brain (Figure 2A) from magnetic resonance imaging (MRI) and in lungs and liver (Figure 2B) from CT scan. Hence, crizotinib targeted drug therapy was recommended. Simultaneously, the patient was diagnosed with lower left lung adenocarcinoma, stage IV, along with bilateral lung, pleura, brain and liver metastases (Figure 2). 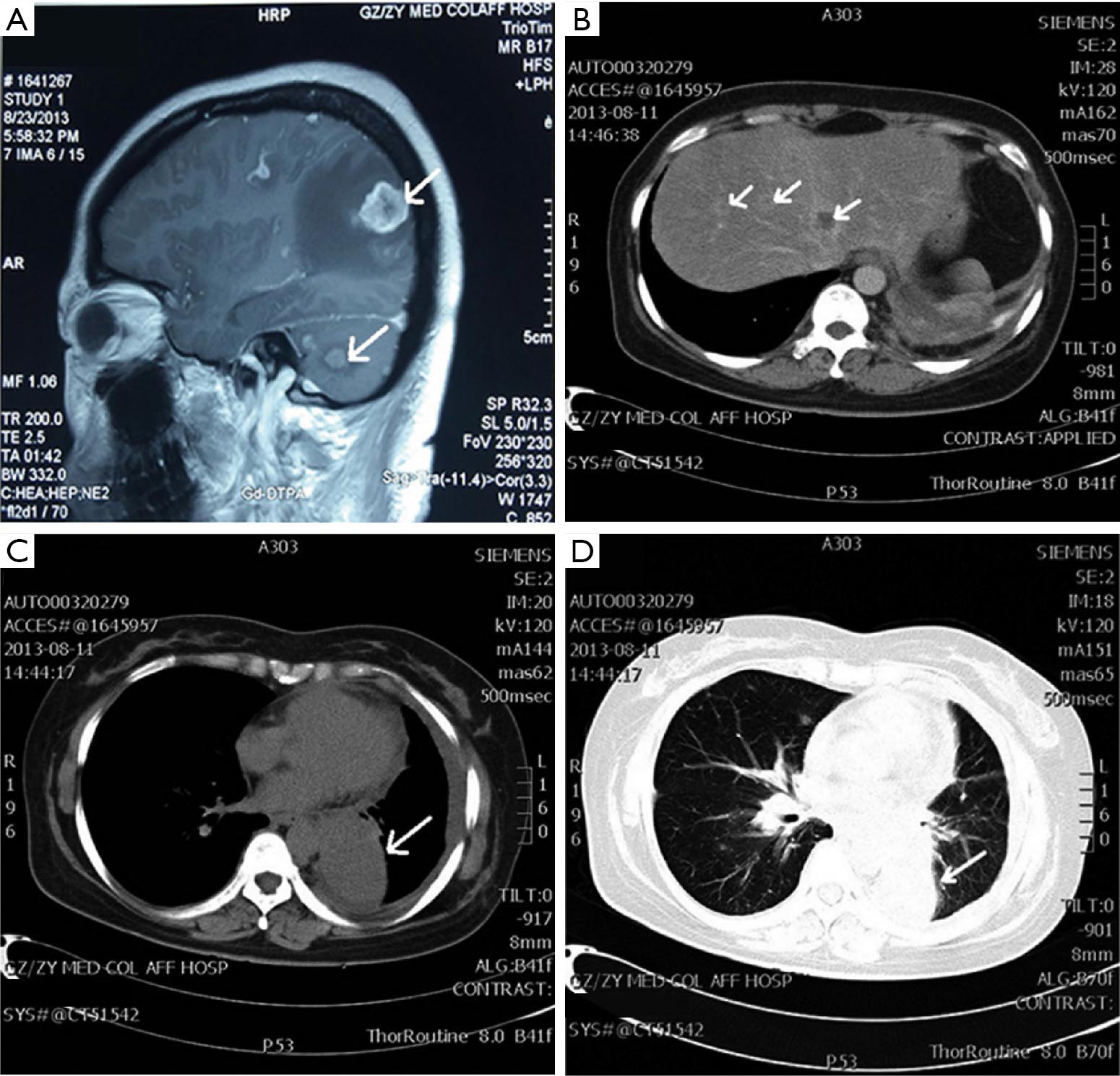 Molecular target treatment was initiated on August 29, 2013 and the patient was given oral Crizotinib, with a dose of 250 mg, twice a day. Also, whole brain radiotherapy (WBRT) alongside in-field boost (6) commenced on August 29, 2013. The repeated MRI reported that the metastases of cerebrum and cerebellum have markedly decreased in size (Figure 3A).

Figure 3 MRI and CT image. (A) After the 24 days of crizotinib therapy and whole brain radiotherapy, the larger lesions reduced to 1 cm, and smaller lesions disappeared completely (captured on 22nd September, 2013); (B) lesion in mediastinal window of the chest was significantly reduced and after taking 32 days disappeared completely (captured on 29th September, 2013); (C) the hepatic lesions were significantly reduced after 32 days of taking the crizotinib, three hepatic lesions disappeared, the larger lesion reduced from 2 to 1 cm, the smaller lesion reduced from 1 to 0.5 cm (captured on 29th, September, 2013).

However, Crizotinib also led to some side effects, though minor ones. Although a chest CT scan showed that the tumors on the left lower lobe and hepatic had reduced significantly, along with the mediastinal lymph nodes and hilus pulmonis lymph node (Figure 3B,C), the patient experienced a low-grade fever, chest tightness, shortness of breath and Karnofsky performance status (KPS) (7) rating falling to 60 point. The lung exudative lesions had increased in size (Figure 4A). Considering the symptoms like wet rales and shortness of breath, the history of Crizotinib administration, imaging findings and lack of bacterial growth found on multiple sputum cultures, a diagnosis of Crizotinib-induced level 4 interstitial pneumonia (Common Terminology Criteria for Adverse Events, v.3.0) was performed. The patient was therefore administered with dexamethasone 10 mg plus cefuroxime 2.0 mg twice a day and oxygen inhalation. Quick medical follow-up and treatment could reduce the chest tightness and shortness of breath. Significantly, a rise on KPS score was witnessed, whereby improving the symptoms. CT scan showed that the pulmonary exudative lesion area disappeared in contrast with the results of the previous scan lesion area (Figure 4B,C). Finally, on October 14, 2013, the patient was discharged from the hospital accounting for the signs of recovery. And continuous treatment with lower dosages was still needed.

The study was approved by institutional Ethics Committee of the Affiliated Hospital of Zunyi Medical University. Written informed consent was obtained from the patient for publication of this case report and any accompanying images.

Molecular markers like ALK rearrangement and individual targeted treatment like crizotinib have become a hot topic of research (8). Inhibiting the kinase activity of fusion protein which is the result of the chromosomal rearrangement, crizotinib is widely used for lung cancer caused by fused ALK and EML4 gene. At the annual meeting of the American Society of Clinical Oncology, the results of clinical phase II trial (profile A8081005) using crizotinib to treat ALK-positive NSCLC patients, revealed that out of 133 patients, 51.1% showed curative results and 85% and 73.7% were the 6- and 12-week disease control rates, respectively (9). In 2012, the European Society of Medical Oncology updated the research result of the A8081005 trial (10).

Considering the adverse effects of crizotinib, visual abnormalities, nervous lesions, heart abnormalities, kidney injury and QT interval extension are the most common ones (11). By September 2012, according to the updated safety data researched in the A8081001, A8081005 and A8081007 trials, 0.5% of NSCLC patients developed drug-related hepatotoxicity and 2% (22/1,354) of the patients displayed treatment-related interstitial lung disease/pneumonia (12), in which 14 cases (1%) were between 3 and 5 levels, suggesting serious condition (13). Watanabe et al. presented a case of crizotinib-induced ILD. Although the report also showed a patient with EML4-ALK positive NSCLC, IP is preexisting (14). Whereas, in our report, the patient, which had no medical history of IP and no any symptoms associated with IP before crizotinib treatment, presented wet rale, shortness of breath, exudative imaging after using it. To reduce chest distress and anhelation, an active glucocorticoid treatment needs to be followed. The dose, adjusted according to prescription, can be reduced slowly over time. It’s a case drawing our attention that although the restoring effect of crizotinib on ALK gene rearrangement benefits to rearranged-ALK NSCLC patients, its side effects and toxicity should not be ignored too. Also, the drugs should be used on right time and in the right manner in order to display maximal efficiency.

This is a single case and spontaneous regression-though rare-cannot be ruled out. However, these are often associated with immunologic responses, a possible positive contribution of crizotinib to tumor control in NSCLC seems worthwhile to be further investigated.

Conflicts of Interest: All authors have completed the ICMJE uniform disclosure form (available at http://dx.doi.org/10.21037/apm-19-420). The authors have no conflicts of interest to declare.

Ethical Statement: The authors are accountable for all aspects of the work in ensuring that questions related to the accuracy or integrity of any part of the work are appropriately investigated and resolved. The study was approved by institutional Ethics Committee of the Affiliated Hospital of Zunyi Medical University. Written informed consent was obtained from the patient for publication of this case report and any accompanying images. The study was conducted in accordance with the Declaration of Helsinki (as revised in 2013).