Effects of dezocine, morphine and nalbuphine on electropain threshold, temperature pain threshold and cardiac function in rats with myocardial ischemia

Myocardial ischemia (MI) is led by the unbalance between myocardial oxygen supply and myocardial oxygen requirements. Generally, angina is a common complication of MI. Increasing attention has been given to its clinical significance because sudden cardiac death would be caused by the disorder (1).

Several studies have been reported to illustrate difference of pain thresholds between on some pain tests in silent MI and symptomatic MI (2,3). However, few was to be reported about whether the different analgesic could have various influence to pain threshold. Analgesics are a large and diverse group of drugs that selectively inhibit and relieve various kinds of pain, which exact great importance on the postoperative recovery of patients and effect of treatment (4). They are potentially useful for one or more painful conditions by interacting with specific receptors of the central or peripheral nervous system (5). The main analgesics used in outpatient surgery or the treatment of moderate to severe pain are dezocine, morphine and nalbuphine. Anesthetic agents may differentially modulate pain perception (6). Particularly, it has been declared that morphine is a widely used opioid for treatment of moderate to severe pain (7).

Therefore, in the present study, the MI model was established by ligating the coronary arteries of rats. We applied the animal models that combine disease and syndrome, an important tool for pharmacodynamic evaluations, to investigated the effects of dezocine, morphine and nalbuphine on the electrical pain threshold (8), temperature pain threshold and cardiac function were investigated, providing a theoretical basis for the selection of safer and more effective analgesic drugs for patients with MI. We present the following article in accordance with the ARRIVE reporting checklist (available at http://dx.doi.org/10.21037/apm-19-460).

Experiments [(Healthy male Sprague-Dawley (SD) rats (SPF grade, 10–12 weeks old, and 250–300 g each)] were performed under a project license [license number: SCXK (Jun 2018-004)] granted by Tianjin Second Animal Experimental Center and was approved by institutional of Tianjin Second Animal Experimental Center [SCXK (Jun 2018-004)]. These rats were raised in a professional room with free drinking water and eating food. Room temperature was maintained at approximately 26 °C with a humidity of 40–70%, light was provided for 12 hours a day, and the room was well-ventilated.

All rats were examined by electrocardiogram before the operation, and the T wave, S-T segment abnormal changes, or abnormal heart rhythms were discarded. Forty rats were randomly selected as the MI group. Then, 20% of urethane (dose: 5 mL/kg) was intraperitoneally injected for anesthesia. The thoracotomy was performed under sterile conditions, and the heart was exposed between the third and fourth ribs. After the operation, the electrocardiogram machine (rated voltage, 10 mm/mv; paper speed, 25 cm/s) was connected to record the changes of the electrocardiogram at different time points. The success of MI modeling was defined as achieving one of the following two conditions: (I) T wave towering and more than half of the R wave; (II) T wave towering and S-T segment displacement. Each rat was intramuscularly injected with 40,000 U/d of penicillin to prevent postoperative infection.

The electropain threshold values before and after administration are presented in Table 1. The response to electrical stimulation at each time point of MI (MI without treatment) was the lowest in the same time period, when compared to the other groups, and the peak was observed in this group at two hours after administration.

The change in the curve for the tail rejection threshold of electrical stimulation is presented in Figure 1. The higher the curve value was, the more the pain sense decreased (the threshold value increases). There was no significant difference in the MI group at each time point (P>0.05). Nalbuphine has the highest sensitivity, followed by dezocine and morphine. At one hour after administration, this gradually increased with morphine, but remained lower with dezocine and nalbuphine. At two hours after administration, all three drugs reached its peak. The difference between morphine and nalbuphine was not significant, while the decrease in pain with dezocine was the highest. After three hours of administration, the effect of nalbuphine decreased the slowest. That is the effect lasted for a long period of time. The effect of dezocine also decreased with time, while the effect of morphine basically diminished at four hours after administration. 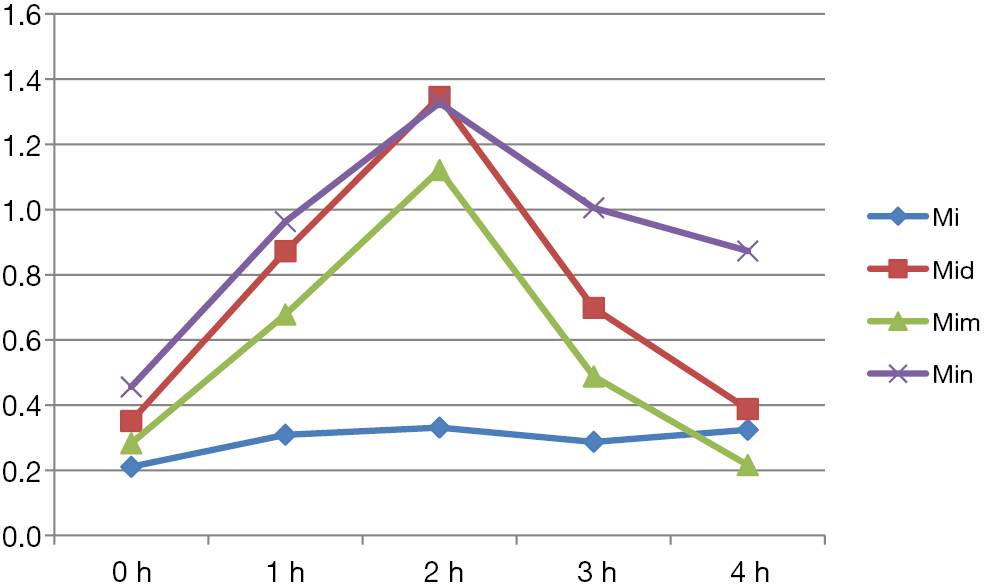 Table 2 Comparison of temperature and pain threshold before and after administration (s, n=10,)
Full table 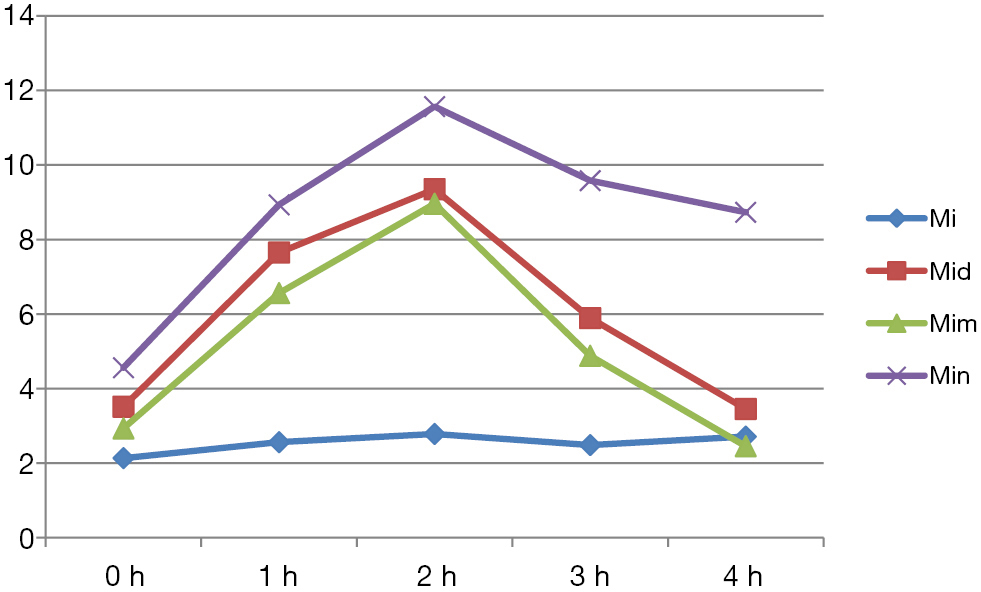 According to the above results for the electrical pain threshold and temperature pain threshold, the cardiac function indexes of each group of rats were measured at the peak of efficacy, that is, at two hours after administration. The HR, EF, CO, IRT and MAP results are presented in Table 3.

The hearts of rats in each group were dissected and weighed, and the results for the calculated the heart weight to body weight ratio are presented in Table 4. The weight gain in the Mid group significantly increased up to (630.9, 52.3) mg/100 g, but there was no significant difference between the Mim group and MI group.

An animal model that combines disease and syndrome is an important method to explore the mechanism of disease occurrence and search for effective treatment methods. The advantages are as follows: (I) on the basis of the disease model, it has good reliability, stability and single factor; (II) it can introduce the time for model construction, and better reflect the law of disease development; (III) it is both macro and micro, and is practical and operational; (IV) it has more restrictions, and many uncertain factors clearer. The disadvantage is that there are great differences between animals and human beings in physiology and biochemistry, which needs to be verified by multiple parties before this can be applied in clinical practice. In the present study, the MI model was established by ligating the coronary artery. In the experiment, the measurement of cardiac function in the MI group confirmed that all indexes in the model group were significantly lower than those in the normal group. Some literatures have shown that severe MI can be induced as long as the infarct area is more than 20% (9,10). However, the disadvantage of this method is that the operation is difficult, and the postoperative mortality can reach more than 50%, which requires skilled operators (11).

Analgesics mainly act on the central or peripheral nervous system, selectively inhibits, and relieves all kinds of pain caused by tissue damage or potential damage, reduces the tension and anxiety caused by pain, and helps patients have a good rest, activity, and diet (12). Opioids have been commonly used as analgesics, but most of these are addictive, and have adverse reactions, such as respiratory depression (13). Therefore, in terms of drug selection, and in addition to its quick effects and good effects, these should also be safe.

Dezocine is a novel opioid receptor-antagonistic analgesic, which has been mainly applied as postoperative, visceral, and carcinogenic analgesics (14-16). In general, the peak value can reach within 10–90 minutes after intramuscular or intravenous injection, with an average terminal half-life of 2.4 hours (17,18). Its advantages mainly include the following: (I) The analgesic effect was similar to or slightly higher than that of morphine, but there were fewer mental dependence and related adverse reactions; (II) it has a capping effect on respiratory depression and so on; (III) it is a receptor agonist or receptor antagonist, and is less addictive (19). The common side effects include nausea, vomiting, sedation, giddiness, anorexia, disorientation, psychedelic, perspiration, and tachycardias (20). So coronary heart disease patients should take it with caution. The most common symptoms of MI were angina pectoris, presenting as paroxysmal and compressive pain in the front of the chest, accompanied by palpitations, shortness of breath, dyspnea, and other symptoms, which were mainly associated with strenuous exercise, mood swings and acute circulatory failure. In the present study, dezocine peaks in 2 hours, and the analgesic effect of electrical stimulation was better. However, for the rat HR, EF, CO, IRT and MAP, and relative heart weight was the most significant. Hence, analgesics should be chosen carefully for safety.

Morphine is a form of opioid drug morphine hydrochloride, a derivative of morphine, is a kind of anesthetic that can relieve acute pain in clinic, and it has a strong analgesic effect (21). It is also used for angina pectoris caused by myocardial infarction. Morphine mainly acts on the cerebral cortex, which can inhibit the pain area, respiratory center, and cough center. Morphine is usually injected subcutaneously and intramuscularly, and is absorbed rapidly. Furthermore, 60% of the total morphine can be absorbed within half an hour after injection, and rapidly metabolized to the lungs, liver, spleen, kidney, and other organs. Since morphine acts on opioid receptors in different brain regions, it has strong physiological dependence, and can easy cause addiction. Therefore, patients who need long-term medication should use this with caution. In the present study, morphine had the worst pharmacodynamic sensitivity and short duration, but its main effect was on the brain, and had the least impact on various cardiac function indexes in rats. However, due to its contraindication with use time, morphine has certain limitations.

Nalbuphine is short for nalbuphine hydrochloride injection, and is an opioid receptor agonist—antagonistic analgesic (22). It mainly acts on spinal cord kappa receptors, activates kappa receptors at the spinal cord level and kappa 3 receptors at the upper spinal cord, and is mainly used as relief to severe pain, such as burns, cancer, surgery, kidney, or biliary colic pain (23). It is also often used for myocardial infarction, angina pectoris, pain, etc. Its advantages are as follows: (I) a part of the antagonistic receptor has related side effects, which mainly reduce respiratory depression, nausea and vomiting, itching, and other adverse symptoms; (II) it does not easily increase the load to the heart, and does not increase blood pressure; (III) it has a quick response (5–10 minutes) and long action time (3–6 hours); (IV) it has a low incidence of adverse reactions and high safety, and can be used for postoperative analgesia, and gynecological and pediatric surgery analgesia (24). In the present study, the analgesic effect of nalbuphine was the earliest and longest, and it has the best analgesic effect in terms of temperature. In addition, in the cardiac function test of MI rats, nalbuphine has a small effect and high safety. Therefore, nalbuphine is a relatively good analgesic agent for patients with MI.

The present study provides a certain data basis for the selection of analgesics for patients with MI, but the specific application in clinical practice needs to be verified through multiple approaches, in order to ensure its safety and reliability.

Reporting Checklist: The authors have completed the ARRIVE reporting checklist. Available at http://dx.doi.org/10.21037/apm-19-460

Conflicts of Interest: All authors have completed the ICMJE uniform disclosure form (available at http://dx.doi.org/10.21037/apm-19-460). The authors have no conflicts of interest to declare.

Ethical Statement: The authors are accountable for all aspects of the work in ensuring that questions related to the accuracy or integrity of any part of the work are appropriately investigated and resolved. Experiments were performed under a project license [license number: SCXK (Jun 2018-004)] approved by Tianjin Second Animal Experimental Center.