Primary hepatocellular carcinoma (PHC) is a common malignant liver tumor originating in hepatocytes or intrahepatic duct cells. The morbidity and mortality rates of PHC are among the highest of all malignant tumors (1,2). Early diagnosis and timely removal are the optimal approaches to treating PHC effectively, However, the majority of PHC patients are already at a later stage when they are diagnosed, meaning only a small portion are able to undergo routine removal surgery. For many PHC patients, transcatheter arterial chemoembolization (TACE) is the main option for conservatively prolonging survival time (3,4). Although TACE is the preferred treatment for patients with advanced PHC, there are still some patients who do not respond well and require repeated interventions (5). Therefore, there is a clinical need for a non-invasive and safe way by which to evaluate the effectiveness of TACE. Owing to its high sensitivity to tumor progression, tumor-specific growth factor (TSGF) is clinically used to evaluate the effect of tumor therapy (6). Current research has showed that microRNA is abnormally expressed in a variety of malignant tumors. As a member of the miRNA family, miR-214 is abnormally expressed in tumors originating from various tissues; especially in liver cancer cells, its levels are significantly reduced (7). This study aimed to investigate the changes in the levels of serum TSGF and miR-214 before or after TACE surgery, and to analyze their predictive value in the long-term efficacy of TACE, to provide a reference for clinical application.

We present the following article in accordance with the MDAR reporting checklist (available at http://dx.doi.org/10.21037/apm-20-1224).

The authors are accountable for all aspects of the work in ensuring that questions related to the accuracy or integrity of any part of the work are appropriately investigated and resolved. All procedures performed in this study involving human participants were in accordance with the Declaration of Helsinki (as revised in 2013). The study was approved by Ethics committee of Chang’an Hospital of Xi’an and Ethics committee of Hanzhong City People’s Hospital board of (No. 20121226091H) and informed consent was taken from all the patients.

The patients were placed in the supine position, and the right lower extremity artery was selected as the puncture point. Following local anesthesia, the artery was punctured using the Seldinger technique. Angiography was performed on the abdominal, hepatic, and superior mesenteric arteries. Then, the number of lesions, blood supply to the tumor, presence of vascular invasion, and arteriovenous fistula were observed and recorded. Next, 5F hepatic duct ultra-selective intubation was pushed to the hepatic artery, and an appropriate amount of chemotherapy drugs and super-liquid iodized oil mixed emulsion were injected. The blood supply at the lesion was confirmed by hepatic arteriography. After the blood supply at the focus is completely limited, the catheter was then removed and conventional wound dressing was performed. Postoperatively, the patients were also given liver protection and immunity enhancement.

One day before TACE treatment or at one month after TACE treatment, 5 mL of peripheral blood was collected from each PHC patient into an anticoagulation tube. Then, the blood was centrifuged to remove the supernatant and divided into two parts: one part was stored at −20 °C for TSGF measurement, and the other was stored at −80 °C for the measurement of miR-214 expression.

Patient follow-up in the form of telephone follow-up commenced on the day of pathological diagnosis. The outpatient reviews were conducted every three months for the first year after treatment, then once every six months for the next year, and at least once a year thereafter. The survival time and status of the patients at the time of follow-up (survival or death) were recorded.

SPSS 20.0 statistical software (IBM Corporation, USA) was used to perform data analysis. The measurement data were expressed as mean ± standard deviation, and the independent sample t-test was used to compare the two groups. The value of serum TSGF and miR-214 levels for predicting the efficacy of TACE were evaluated by using ROC curves and the area under the curve (AUC). Survival curves were generated using the Kaplan-Meier method, and the log-rank test was used to compare survival between the groups. A P value of <0.05 was considered to be statistically significant.

Serum TSGF and miR-214 levels before or after TACE treatment 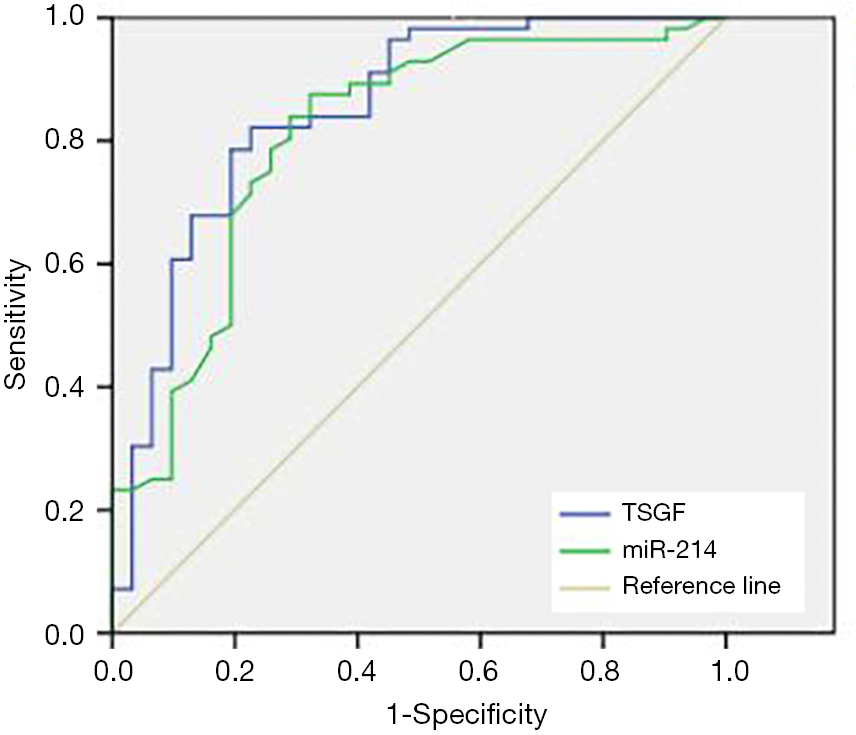 TACE technology is constantly evolving, and its clinical use is conducive to the treatment of patients with advanced PHC. However, as single interventional therapies often cannot eliminate the lesion, the evaluation of the efficacy of interventional therapy is pivotal in guiding subsequent treatment (10). Currently, the main predominant methods for evaluating the clinical efficacy TACE after surgery are imaging and laboratory examination. However, there are certain flaws in imaging studies. Ultrasound examination, for instance, has a lower detection rate for recurrent of smaller lesions, whereas CT examinations can easily confuse iodized oil deposits and enhanced tumor lesions, which is not helpful for the detection of residual lesions. Despite MRI has a high detection rate, its application is limited because of the high costs it incurs (11). Alpha-fetoprotein detection is the most widely used laboratory test. However, the presence of alpha-fetoprotein-negative liver cancer makes its predictive value for the TACE postoperative efficacy controversial (12). Therefore, identifying routine blood tumor markers can be quickly and conveniently measured and predicting and evaluating the prognosis of patients is the focus of PHC research.

In summary, after treatment with TACE, the levels of TSGF were decreased, while the levels of miR-214 were increased. Serum TSGF and miR-214 could be used as potential biomarkers for PHC diagnosis and prognosis.

Reporting Checklist: The authors have completed the MDAR reporting checklist. Available at http://dx.doi.org/10.21037/apm-20-1224

Conflicts of Interest: Both authors have completed the ICMJE uniform disclosure form (available at http://dx.doi.org/10.21037/apm-20-1224). The authors have no conflicts of interest to declare.

Ethical Statement: The authors are accountable for all aspects of the work in ensuring that questions related to the accuracy or integrity of any part of the work are appropriately investigated and resolved. All procedures performed in this study involving human participants were in accordance with the Declaration of Helsinki (as revised in 2013). The study was approved by Ethics committee of Chang’an Hospital of Xi’an and Ethics committee of Hanzhong City People’s Hospital board of (No. 20121226091H) and informed consent was taken from all the patients.