Sepsis is defined as life-threatening organ dysfunction caused by a dysregulated host response to infection (1). Previous research has mainly focused on infectious inflammation, shock, renal dysfunction, etc. In recent years, a greater number of studies have begun to identify the importance of sepsis on myocardia and heart function. Some phenomena that have been linked with sepsis-related cardiac damage include septic cardiomyopathy, sepsis-induced myocardial dysfunction, sepsis-induced cardiac dysfunction (SICD), and others. In fact, these terms refer to the same thing: heart injury secondary to severe infection resulting in cardiac dysfunction. Two points here are important for the definition: first, heart injury and cardiac dysfunction must happen after infection; second, there can be no other identifiable cause for these cardiac problems. In our study, we use the term “SICD” to emphasize the basic pathophysiological process and characteristic of this phenomenon. One characteristic of SICD is that left ventricular dysfunction is reversible. In clinical experience, when the patient’s condition involves an infection that has been effectively controlled with septic shock being resolved, cardiac function can recover in turn (2). In ICU, present assessment about SICD mainly includes electrocardiogram, pulse index continuous pardiac output (PiCCO), echocardiography, biomarkers including cardiac troponin T/I (cTnT/I) and N-terminal pro-brain natriuretic peptide (NT-proBNP). Specific treatment includes cardiopulmonary support and medication including trimetazidine, fasudil hydrochloride, levosimendan and esmolol. However, other clinical observational research has demonstrated that cardiac dysfunction may be a risk factor for poor prognosis in medium- to long-term follow-up (3). Otherwise, how to predict the long-term prognosis of patients with SICD remains unclear. In recent years, soluble cluster of differentiation 14 subtype (sCD14-ST) has gained significant attention as a useful predictor of patients suffering sepsis. Previous experimental studies have demonstrated that the biological role of sCD14-ST is very complicated (4,5). Based on these previous studies, in this study, we aimed to evaluate the predictive value of sCD14-ST in the long-term prognosis in patients specifically with SICD. We present the following article in accordance with the STROBE reporting checklist (available at http://dx.doi.org/10.21037/apm-20-1093).

Patients with SICD from three intensive care units (ICUs) of three medical centers between January 2015 and December 2018 were enrolled. The inclusion criteria for patients were the following: age over 18 years old, meeting sepsis-3 criteria, echocardiography revealing a left ventricular ejection fraction (LVEF) less than 50%, dilation of left ventricular end-diastolic dimension (LVEDD), elevation of N-terminal pro-brain natriuretic peptide (NT-proBNP), and elevation of cardiac troponin T (cTnT). Meanwhile, the exclusion criteria were the following: history of confirmed unstable coronary heart disease (unstable angina pectoris, acute myocardial infarction) within 1 month before admission to the ICU, congenital heart disease, primary or secondary myocardiopathy, or pulmonary heart disease and atrial fibrillation; history of cardiac and pulmonary resuscitation; history of severe renal failure; rheumatic disease; history of chemotherapy or radiotherapy; malignant tumor; and life expectancy less than 1 month. The criteria of left ventricular dysfunction were a serum level of NT-proBNP ≥125 ng/L or LVEF <50%. Severe renal failure was defined as an estimated glomerular filtration rate (eGFR) lower than 60 mL/min.m2. All patients signed informed content. The study was conducted in accordance with the Declaration of Helsinki (as revised in 2013) and was approved by the ethics committee of our hospital (Lot. 20140704).

The most commonly accepted definition of SICD is reversible myocardial dysfunction caused by sepsis. There are three main features: an LVEF less than 50% as the diagnostic criterion, left ventricular dilatation, and a return to a normal clinical condition during the early stage of the disease (D). The sequential organ failure assessment (SOFA) score of each patient enrolled in the final analysis was performed at the time of admission or according to clinical record.

Blood samples were taken via direct venous puncture into tubes containing 10 mL of sodium citrate on admission. Plasma was isolated within 4 hours after collection of whole blood by centrifugation at 1,800 ×g for 10 min at room temperature. Serum level of sCD14-ST was tested by the PATHFAST Presepsin chemiluminescent enzyme immunoassay (Mitsubishi Chemical Medience Corporation, Japan) using Magtration Technology according to the manufacturer’s instructions. A level of sCD14-ST >200 µg/L was considered positive.

After discharge from hospital with a stable condition, all enrolled patients were followed up for at least 1 year or until the occurrence of endpoints. Endpoints were considered to be major adverse cardiovascular events, including all-cause death, cardiac death, hospitalization due to heart failure, and stroke.

Continuous variables were expressed as mean ± standard deviation (SD) and compared using an unpaired two-sided Student’s t-test when normal distribution and equal dispersion were confirmed. The Mann-Whitney U test and Wilcoxon’s signed-rank test were used when the variance was unequal. Categorical variables were expressed as percentages (%) and compared using the Χ2 analysis or Fisher’s exact test if necessary. A P value <0.05 was considered statistically significant. All statistical analyses were performed with SPSS (version 17.0 for Windows, SPSS, Inc., Chicago, IL, USA). 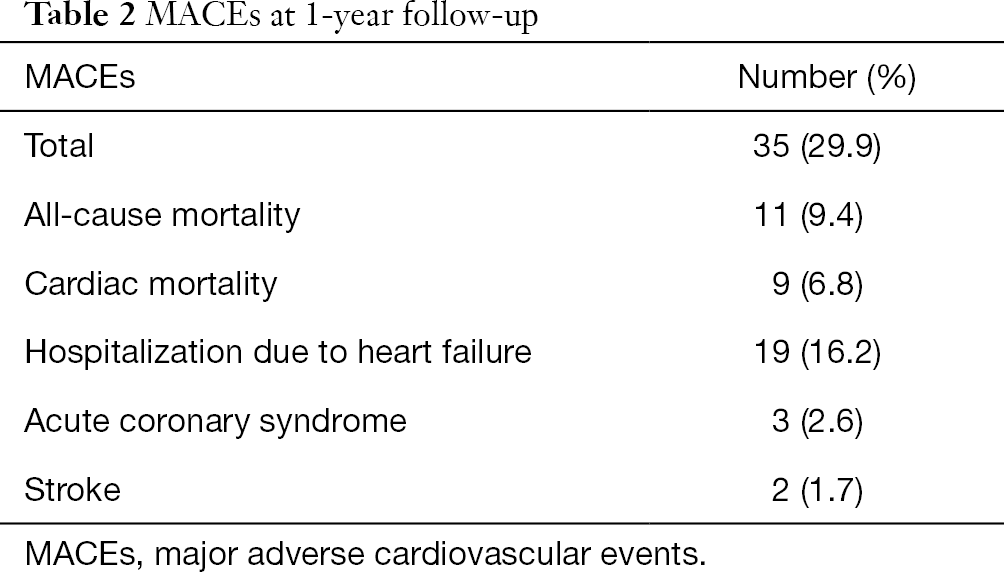 Multivariate analysis revealed that multiple factors (including age, cTnT, Cr, SOFA score, sCD14-ST) were associated with MACEs in patients with SICD at 1-year follow-up (Table 4). In this study, we found that elevation of sCD14-ST increased the risk of MACEs at 1-year follow-up with an odds ratio (OR) of 1.9 (95% CI: 1.4–3.1, P=0.015). We further calculated the sensitivity and specificity of sCD14-ST to MACEs and found that the area under receiver operating curve (AUROC) was 0.784, and the cutoff point to discriminate patients at high risk of poor prognosis was 748.3 µg/L with a sensitivity of 0.78 and a specificity of 0.74 (Figure 1). 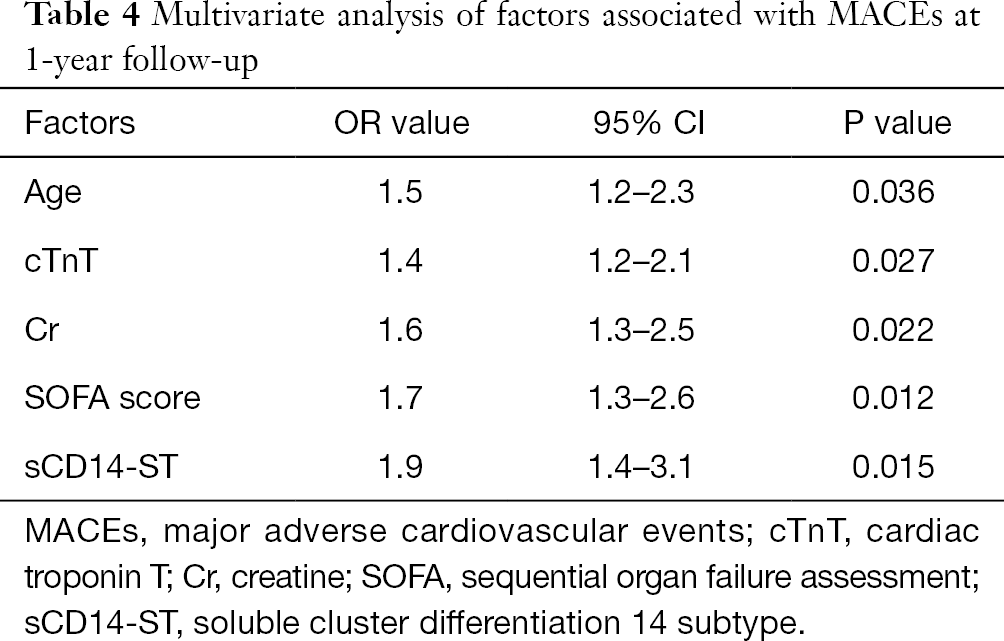 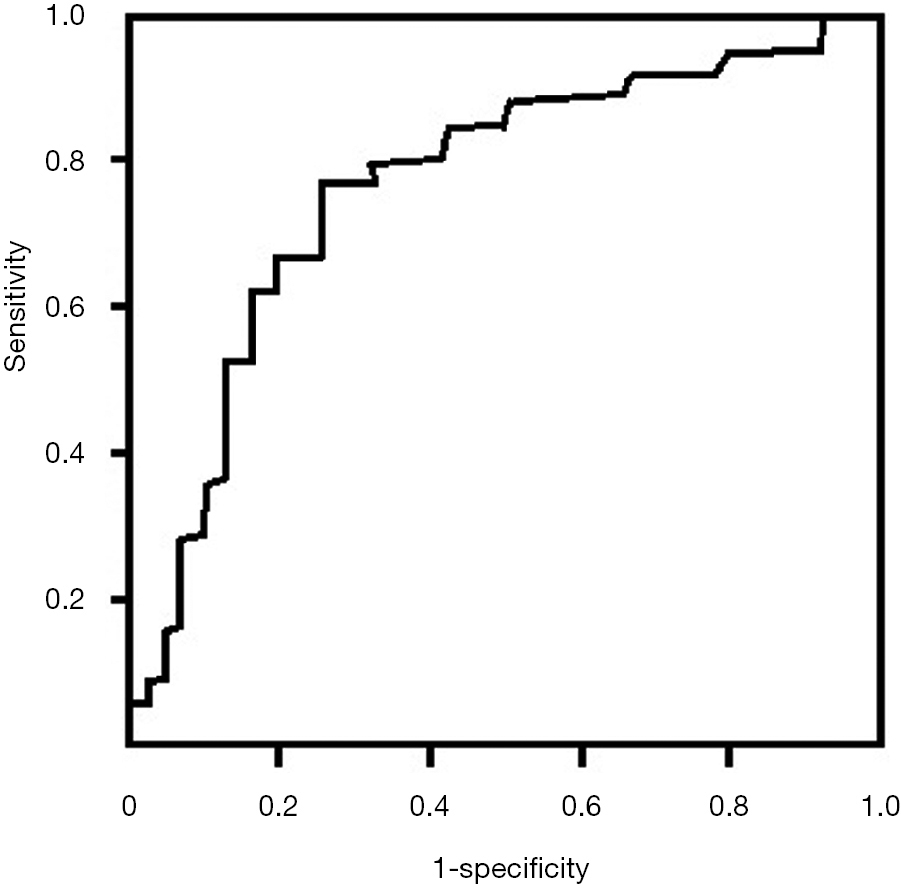 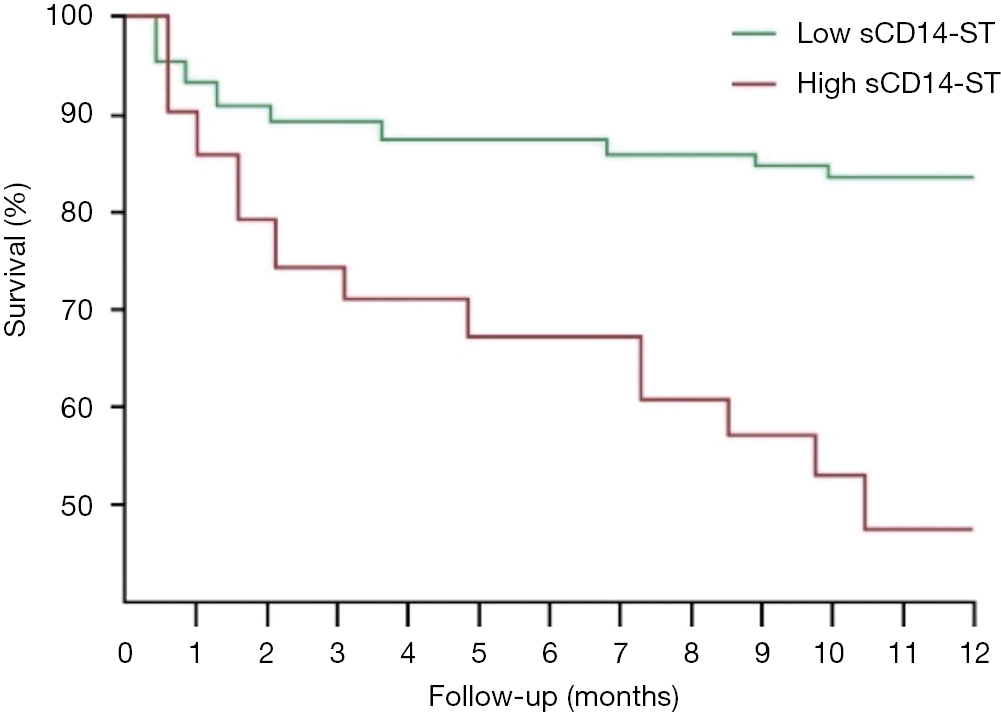 With an increasing focus from researchers on the influence of sepsis on the heart, studies concerning SICD (or injury) have increased significantly in quantity. These studies have mainly focused on three aspects: the pathophysiological mechanism of sepsis-induced cardiac injury and dysfunction, the influence of SICD on patients’ prognosis, the preventive methods and therapy for this kind of patient. As an adverse complication, SICD is a predictor of short- and long-term poor prognosis in patients with sepsis (6). A previous study revealed that SICD assessed by echocardiography showed that the measurement of mitral annular plane systolic excursion (MAPSE) when combined with APACHE II was a good predictor of mortality. Among the echocardiographic parameters, MAPSE alone was also a good predictor of mortality. However, the author of this study thought that the results required further validation from a larger study (7). As for the pathophysiological mechanism of sepsis-induced cardiac injury and dysfunction, recent studies have suggested that SICD may arise from an interaction of many factors, including inflammation, metabolism, and neuroimmunomodulation (8). This pathological process involves multiple signal transduction pathways (9,10) and a variety of cell types including cardiomyocytes, cardiac fibroblasts, and endothelial cells (3,11). In short, the mechanism involved in SICD is very complicated. Unfortunately, no significant progress has been made of late in the prevention and treatment for SICD as the relevant results are conflicting (12,13). For example, in many studies, levosimendan has been demonstrated to be useful in treating patients with SICD (14,15), while other studies have found that levosimendan had no effect on patients’ prognosis (16) and was even associated with a reduced likelihood of successful extubation and an increased risk of supraventricular tachyarrhythmias (17). Apart from this, in a review of the literature in PubMed and other databases, we found few articles relating to the prediction of prognosis in patients with SICD. Some evidence suggests that patients with SICD can recover if sepsis is cured while others may deteriorate or even die (18,19). It is therefore important to find ways to identify SICD patients who are at risk of poorer prognosis.

Soluble CD14 subtype (sCD14-ST) is the soluble N-terminal region of membrane marker/receptor protein CD14, which is released into the blood flow after host cell activation and follows bacterial lipopolysaccharide (LPS) recognition (20). Previous studies on sCD14-ST mainly focused on its diagnostic role in sepsis (21,22). Research on the prognostic value of sCD14-ST showed that sCD14-ST levels were significantly higher at admission, 24–48 hours after admission, and 7 days after admission in nonsurvivors vs. survivors at the same time point (23). In summary, this study suggests that a higher level of sCD14-ST predicted poor short-term prognosis but not specifically for patients with SICD, especially in the long term. In our study, we further investigated the long-term prognostic value of sCD14-ST specifically for patients with SICD. Consistent with findings mentioned above (23), we also found that a higher (cutoff point determined by AUC curve) level of sCD14-ST predicted poor prognosis, including in the long term. Repeated blood tests at the end of 1-year follow-up revealed that patients with a lower sCD14-ST level had lower Cr, NT-proBNP, and higher SBP and LVEF. Taken together, it is reasonable to conclude that a higher level of sCD14-ST is associated with poor prognosis.

We also found that the on-admission serum level of sCD14-ST correlated with some other parameters, including WBC, PCT, cTnT, Cr, SBP, SOFA score, and LVEF. This result suggests that sCD14-ST could be used as a risk factor for condition assessment, and this possibility has already been thoroughly investigated (20,21). In this study, we also found that MACEs mainly occurred within 3 months after discharge. Given this, it may be advisable to closely monitor patients within 3 months after discharge in order to discover medical problems as early as possible.

In conclusion, our study suggested that sCD14-ST could be used as a predictor for SICD and that patients with SICD should be under intensive monitoring within 3 months of discharge. Some limitations of this study include relatively smaller sample size, shorter follow-up duration. Further study should be carried out in multiple centers with a larger sample size and a longer follow-up duration.

Reporting Checklist: The authors have completed the STROBE reporting checklist. Available at http://dx.doi.org/10.21037/apm-20-1093

Conflicts of Interest: All authors have completed the ICMJE uniform disclosure form (available at http://dx.doi.org/10.21037/apm-20-1093). The authors have no conflicts of interest to declare.

Ethical Statement: The authors are accountable for all aspects of the work in ensuring that questions related to the accuracy or integrity of any part of the work are appropriately investigated and resolved. All patients signed informed content. The study was conducted in accordance with the Declaration of Helsinki (as revised in 2013) and was approved by the ethics committee of our hospital (Lot. 20140704).