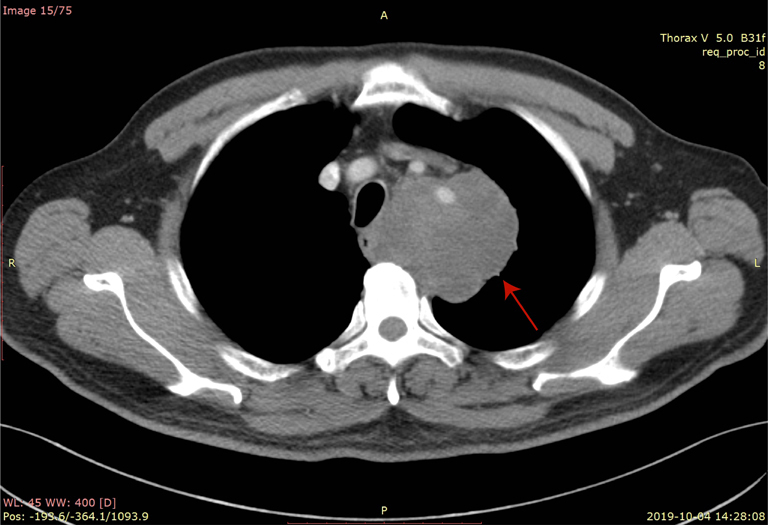 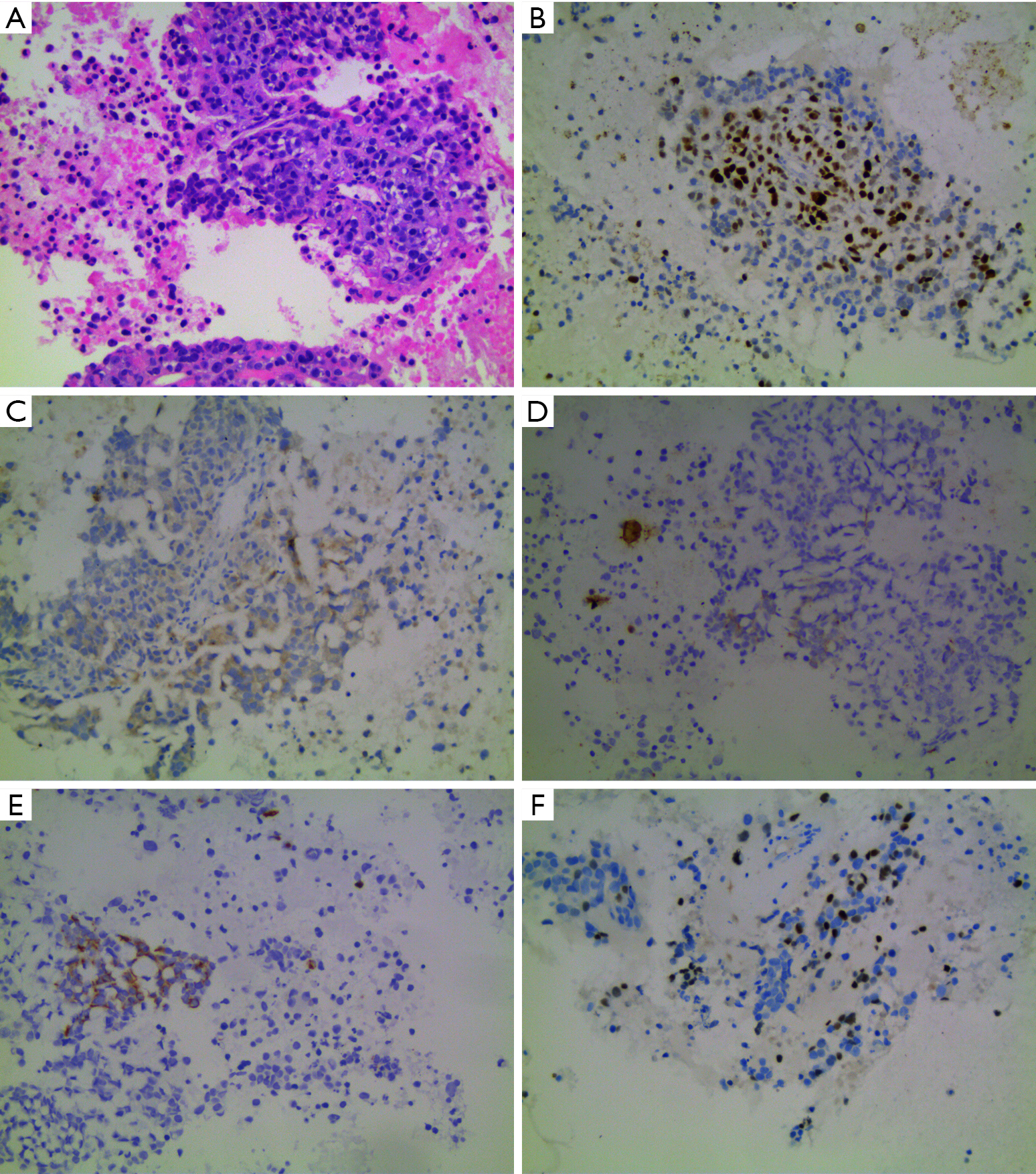 The patient then underwent one cycle of chemotherapy with cisplatin and etoposide from Oct 26, 2019 to Oct 28, 2019. The response was evaluated by positron-emission tomography/computed tomography (PET-CT). The diameter of the largest section of the mass had increased to 9.0 cm × 9.0 cm. The patient’s response was evaluated as SD (Figure 3A). Uptake of 18F-fluorodeoxyglucose (18F-FDG) was detected in the mass, with a maximum standard uptake value (SUVmax) of 8.2 (Figure 3B). Multiple small lymph nodes were detected in the mediastinum (2R, 4R, 4L, 5) and both hilars had slight FDG uptake (SUVmax 2.3).

Figure 3 CT and PET-CT images after one cycle of induction chemotherapy (before cCRT): (A) CT image and (B) PET-CT image. CT, computed tomography; PET, positron-emission tomography; cCRT, concurrent chemoradiotherapy. Arrow showed the mass in in the left upper mediastinum, which increased in size.

As the tumor was enlarged in size, external-beam radiation therapy with concurrent chemotherapy was administered over the next six weeks. Volumetric modulated arc therapy (VMAT) (9) with simultaneous integrated boost (SIB) (10) was delivered by Elekta (VersaHD, Sweden) from November 25, 2019 to January 3, 2020 (Figure 4). Gross tumor volume (GTV) was defined as the tumor in the left upper mediastinum. The lymph node in the mediastinum (2L) was melted with the primary tumor and included in the GTV. GTV of lymph nodes (GTVnd) was defined as the volume of the suspected lymph nodes in the mediastinum (4L/5). Clinical target volume (CTV) was defined as the GTV with a 6 mm expansion, the GTVnd with a 5 mm expansion, and the regions of 2L, 4L/5. CTV was defined based on the principles of involved-field RT (11). Planning target volume (PTV) was defined as CTV with a 5-mm margin. Planning GTV (PGTV) was defined as the sum of GTV and GTVnd with a 5-mm expansion; 95% of PGTV received 60.2 Gy/2.15 Gy/28 F and 95% of PTV received 50.4 Gy/1.8 Gy/28 F. The mean dose to the lungs (MLD) was 9.8 Gy. The percentage of lung volume that received a dose in excess of 5 Gy (V5), 20 Gy (V20), and 30 Gy (V30) was 35.7%, 18.0%, and 13.0%, respectively. Concurrent chemotherapy was delivered and the regimen was adjusted to weekly paclitaxel liposome combined with nedaplatin. In total, four cycles of concurrent chemotherapy were completed. The toxicities reported during cCRT included a decrease in white blood cells (grade II) and nausea (grade II), based on the Common Terminology Criteria for Adverse Events (CTCAE) 4.0 criteria. 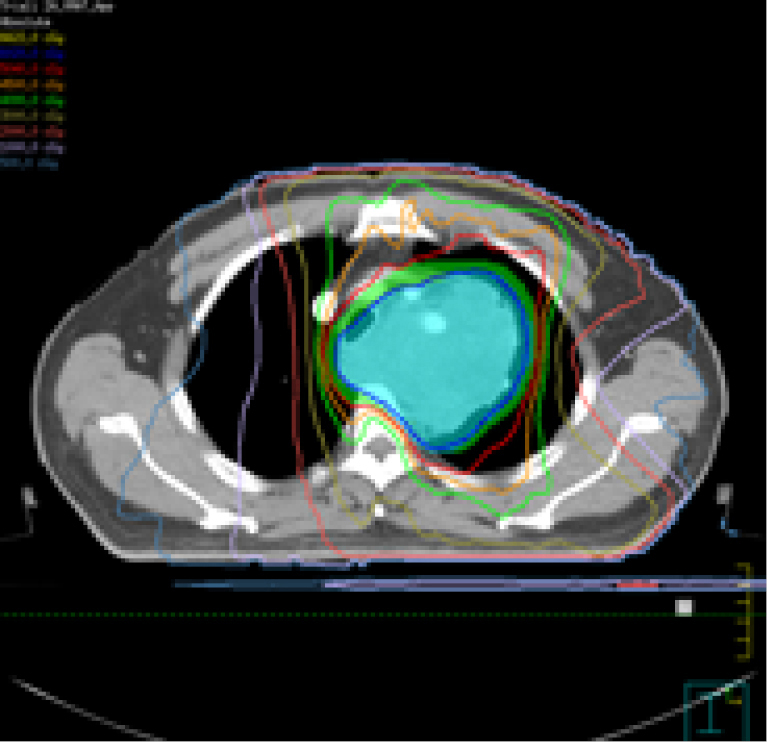 One day after cCRT, the patient immediately received durvalumab (10 mg/kg, q14d) as consolidation therapy. A day after the first infusion, he developed a transient fever, from which he self-recovered. During the third cycle, elevated erythrocyte sedimentation rates (ESR) (93 mm 1st hour) and C-reactive protein (CRP) (2.26 mg/dL) were detected. A repeat CT scan obtained four weeks after radiotherapy (2 cycles of durvalumab) was completed showed an obvious decrease in the size of the primary tumor (5.3 cm × 4.3 cm) (Figure 5). The patient’s response was evaluated based on the Response Evaluation Criteria in Solid Tumors (RECIST) version 1.1 and showed partial response (PR). A routine follow-up CT scan three months after CRT showed grade 1 pneumonitis but no evidence of clinical progression or relapse of cancer (Figure 6). The tumor had decreased in size to 4.6 cm × 3.4 cm. The patient reported no other toxicities. The patient continued to receive durvalumab as consolidative therapy every 2 weeks due to the good response and tolerable toxicity. The patient and his family expressed that the effect of cCRT followed by durvalumab exceeded their expectations and they would continue and finish this consolidative treatment. 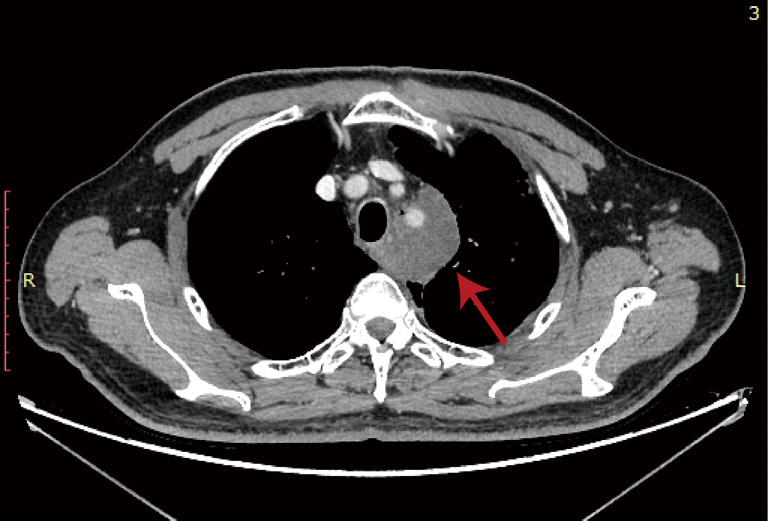 All procedures performed in this case involving human participants were in accordance with the Declaration of Helsinki (as revised in 2013). Written informed consent was obtained from the patient for publication of this manuscript and any accompanying images.

Durvalumab is a selective, high-affinity, human IgG1 monoclonal antibody, that binds to programmed death ligand 1 (PD-L1) and blocks its interaction with programmed death 1 (PD-1) and cluster of differentiation (CD)80 (B7.1). PD-L1 is expressed in a broad range of cancers. The binding of durvalumab to the PD-L1 receptor inhibits the interaction of PD-L1 with the PD-1 and CD80 receptors expressed on immune cells and allows T cells to recognize and kill tumor cells (7).

Based on subgroup analysis of PACIFIC, patients in the <14 days from last radiation to randomization subgroup had the lower HR (95% CI: 0.28–0.66), which suggests that early consolidation immunotherapy may carry more benefit for patients (8). As we known, radiotherapy can increase antigen visibility of tumor, modulates the tumor microenvironment and regulate immune checkpoint expression, which can increase the effect of immunotherapy. And immunotherapy can sensitize tumors to radiation (13). According to this, our patient received his first cycle of durvalumab as early as possible (one day after final radiotherapy). After two cycles of durvalumab, evaluation showed that the tumor size had clearly decreased, which means that immunotherapy and RT enhanced the effect of each other.

In this case, the patient started immunotherapy very early and experienced no severe adverse events, which shows that durvalumab can be used safely soon after cCRT. Transient fever and pneumonitis experienced by the patient were classified as grade 1 according to the CTC AE 4.0 criteria. From the data of PACIFIC trial (7), the use of durvalumab as consolidative immunotherapy does not increase the risk of any toxicity or pneumonitis. The rates of grade 3 and 4 pneumonitis or radiation pneumonitis were 3.4% in the study group and 2.6% in the control group, respectively. The real world data from a French study (14) was consistent with the results of the PACIFIC trial: the rate of toxicity was low, and the rate of durvalumab-related pneumonitis was 1.1%.

From this case, we found that the use of durvalumab following cCRT was feasible in a patient who was resistant to chemotherapy and that its early use was efficient and safe.

Funding: This work was supported by CAMS Innovation Fund for Medical Sciences (2017-I2M-1-009).

Reporting Checklist: The authors have completed the CARE reporting checklist. Available at http://dx.doi.org/10.21037/apm-20-1118

Conflicts of Interest: All authors have completed the ICMJE uniform disclosure form (available at http://dx.doi.org/10.21037/apm-20-1118). The authors have no conflicts of interest to declare.

Ethical Statement: The authors are accountable for all aspects of the work in ensuring that questions related to the accuracy or integrity of any part of the work are appropriately investigated and resolved. All procedures performed in this case involving human participants were in accordance with the Declaration of Helsinki (as revised in 2013). Written informed consent was obtained from the patient for publication of this manuscript and any accompanying images.