Many modern clinical studies have noted the relationship between platelet alloimmunity caused by human platelet antigen (HPA) and some diseases, including neonatal allogeneic thrombocytopenia (NATP), ineffective platelet transfusion (PRT), post-transfusion purpura (PTP), transplant-related thrombocytopenia, and arterial thrombotic diseases (1,2). The distribution frequency of HPA antigens among different populations bears a positive relationship with the likelihood of developing HPA immunity. In this study, the Achang and Jingpo population, ethnic groups unique to Yunnan province, were selected as the research object, and the Han ethnic group in Yunnan was used as the control. The most commonly used HPA genotyping technique of PCR-SSP was employed, and a comparative analysis of the HPA gene distribution and genotype frequencies in the three populations was made, to explore the relationship between platelet antigen polymorphisms and regions, as well as ethnicities. A platelet gene database for blood resources in Yunnan’s minority regions, which helps to explore the origin, inheritance, migration of ethnic minorities and provide data for forensic individual identification, should be established.

Samples from 139 healthy cases were collected from the Achang population, 148 healthy cases from the Jingpo population in the south of Yunnan province, China, and samples from 150 healthy cases were collected from the Han population in Kunming, Yunnan as a control. Each sample was traced back for three generations to ensure there was no history of intermarriage with other ethnic groups. All of the selected subjects were ethically informed and participated on a voluntary basis. The study was approved by First Affiliated Hospital of Kunming Medical University (No. KMMLl2011122) and written informed consent was obtained from all patients. The study was conducted in accordance with the Declaration of Helsinki (as revised in 2013).

A total volume of 2 to 3 mL venous blood of anticoagulant EDTA-K2 was collected from each participant, and frozen at −80 °C for later examination.

The potassium iodide method was applied to measure the ultraviolet absorption peaks of the extracted genomic DNA using a UV spectrophotometer. The absorbance was measured at a wavelength of 260 and 280 nm. The DNA concentration and purity were calculated, and each sample was diluted to a concentration of 1 µg/µL and stored at −20 °C.

Detection of the amplified product

The PCR product (10 µL) was separated in a 2% agarose gel containing 0.5 mg/L ethidium bromide, at a voltage of 80 mV. After electrophoresis for 30 minutes, the results were recorded. Primer design: the primers of WHO officially named HPA1-17 were provided in the kit. The relative 34 pairs of primers for these genes were designed according to the specific base replacement of HPA-a and HPA-b of the HPA exon specific base, and the specific base was used as the 3'end of the forward primers for amplification.

Data were analyzed using SAS 9.3 statistical software (North Carolina, USA). Gene frequencies were compared between the different populations using the χ2 test (precise probability method), and the comparison of genotypes was performed by comparing multiple constituent ratios of the χ2 test. P<0.05 was considered to show difference, and P<0.01 was considered to show a significant difference. 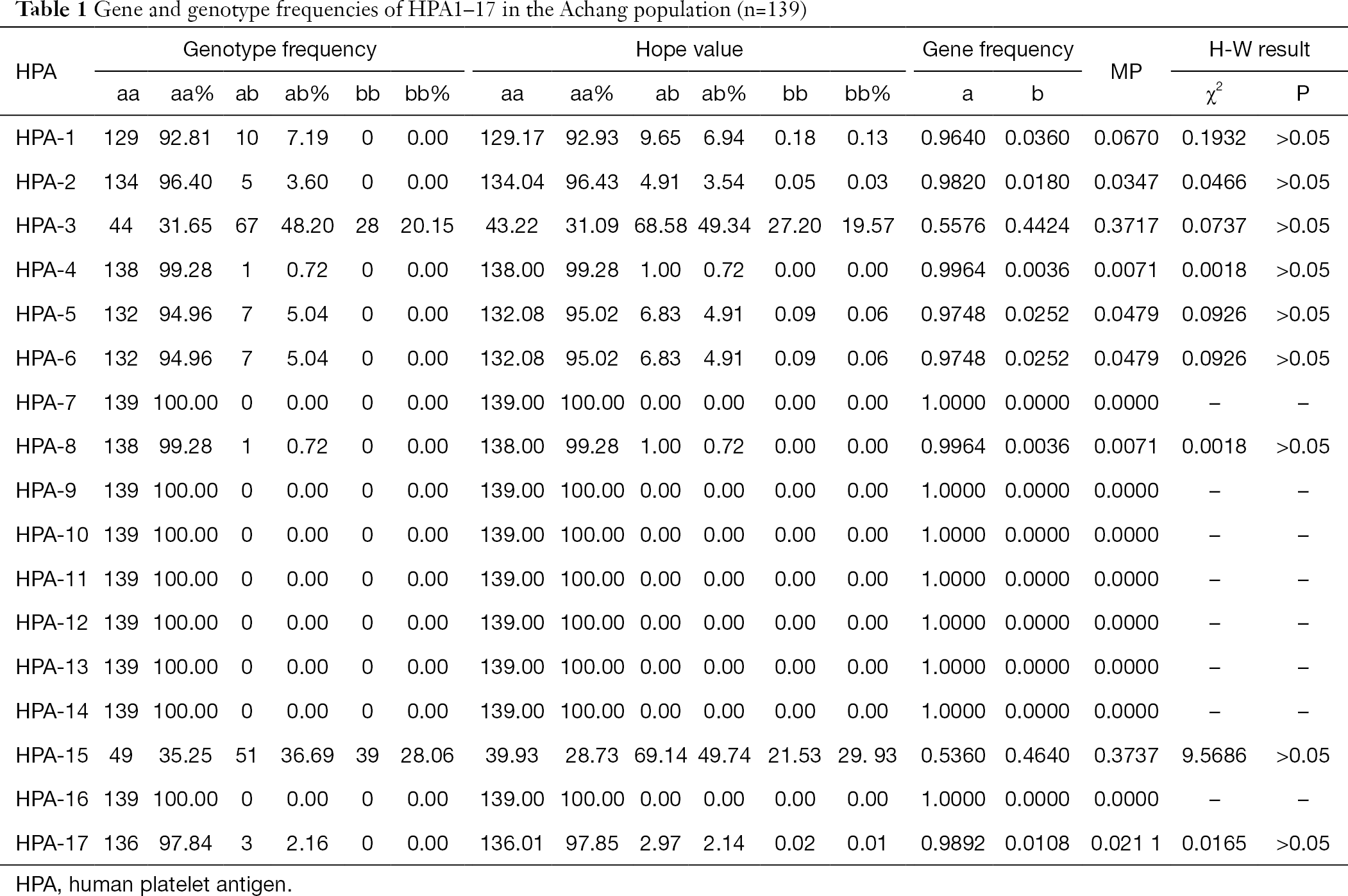 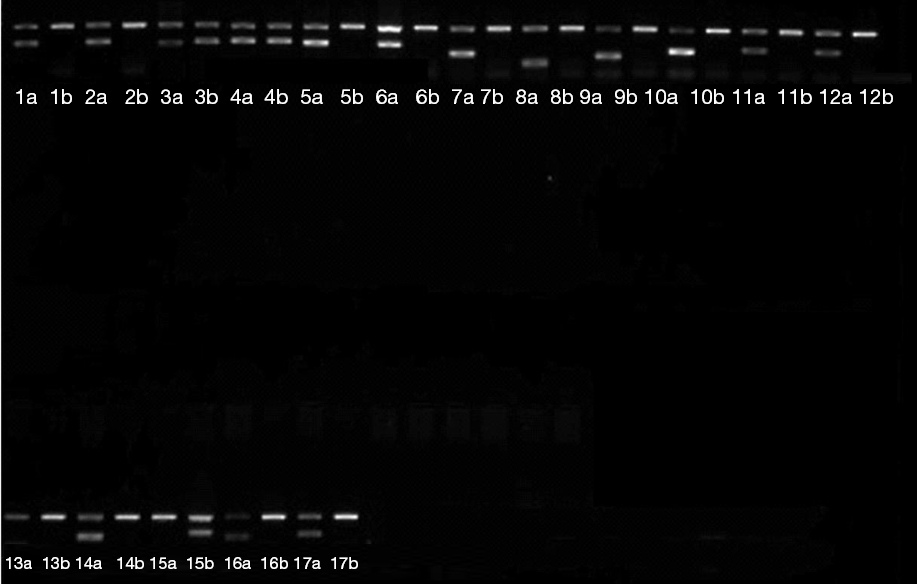 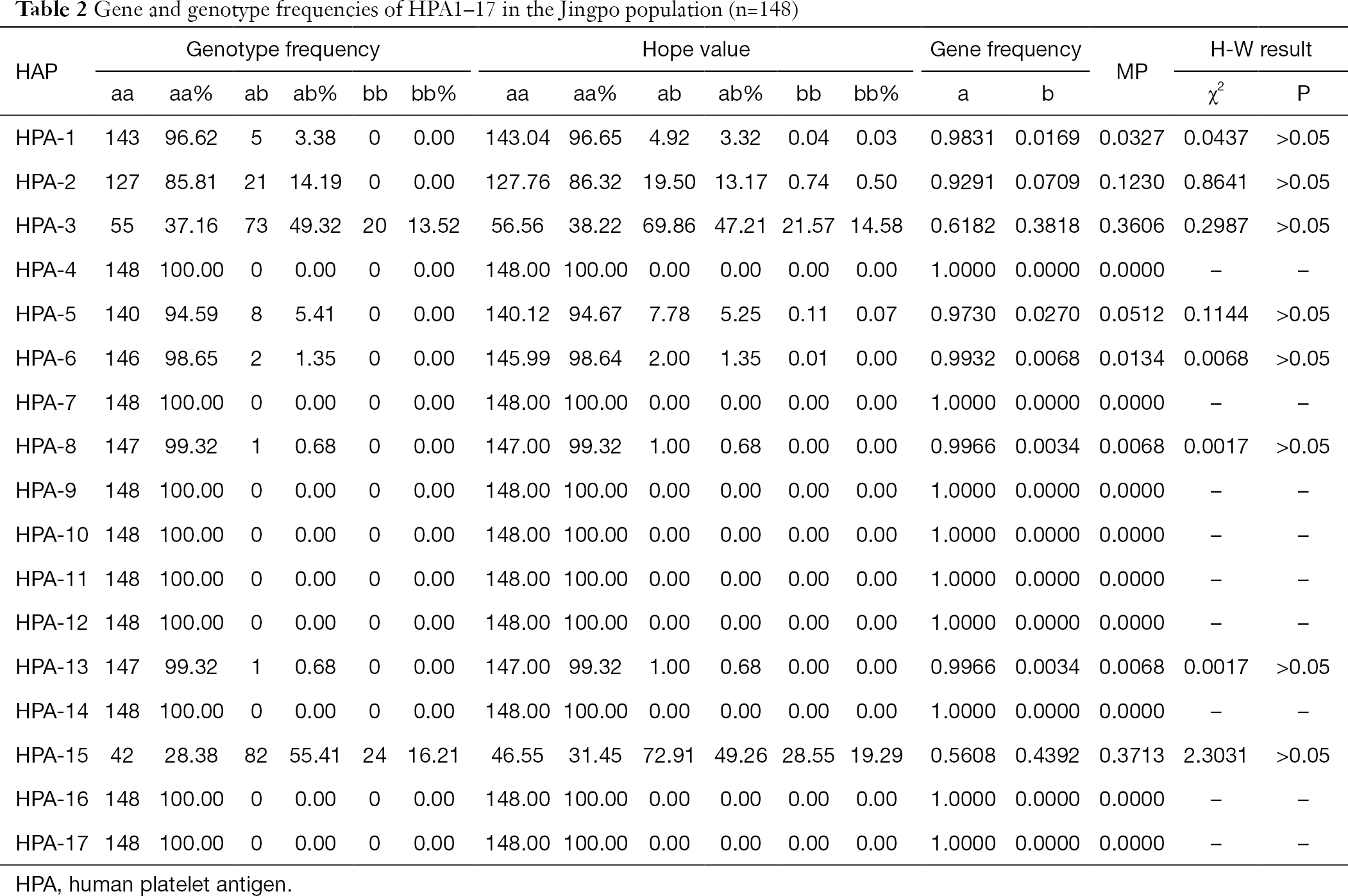 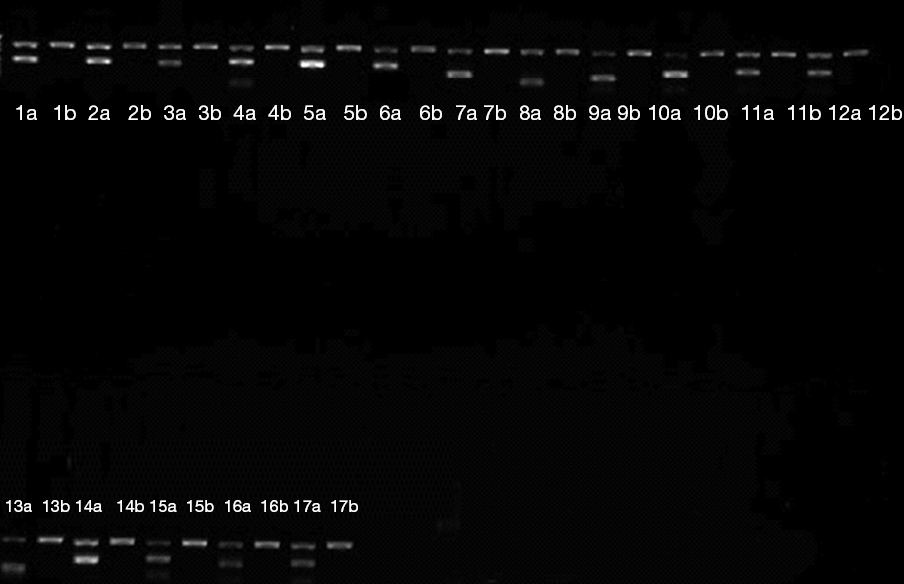 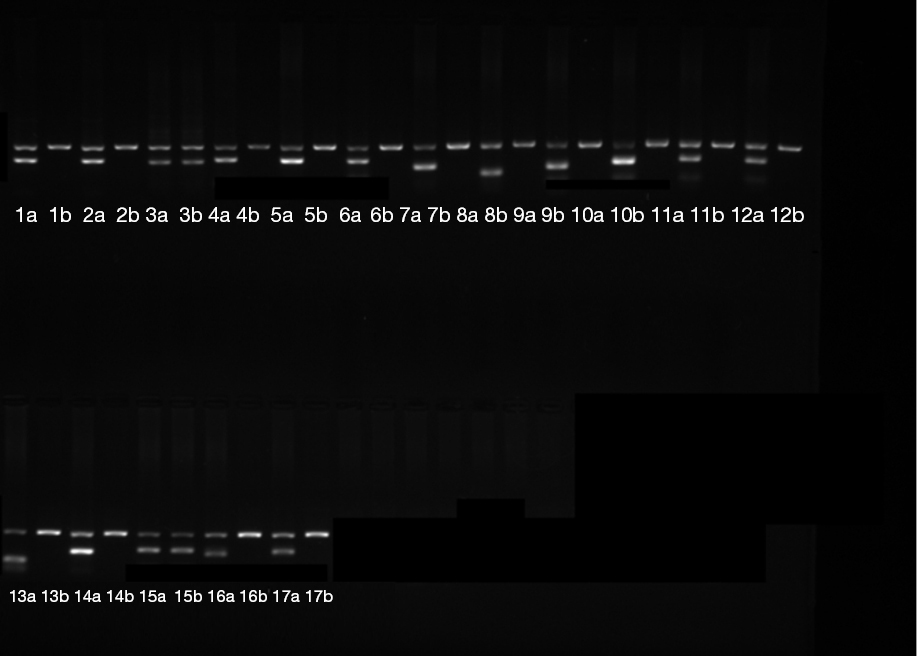 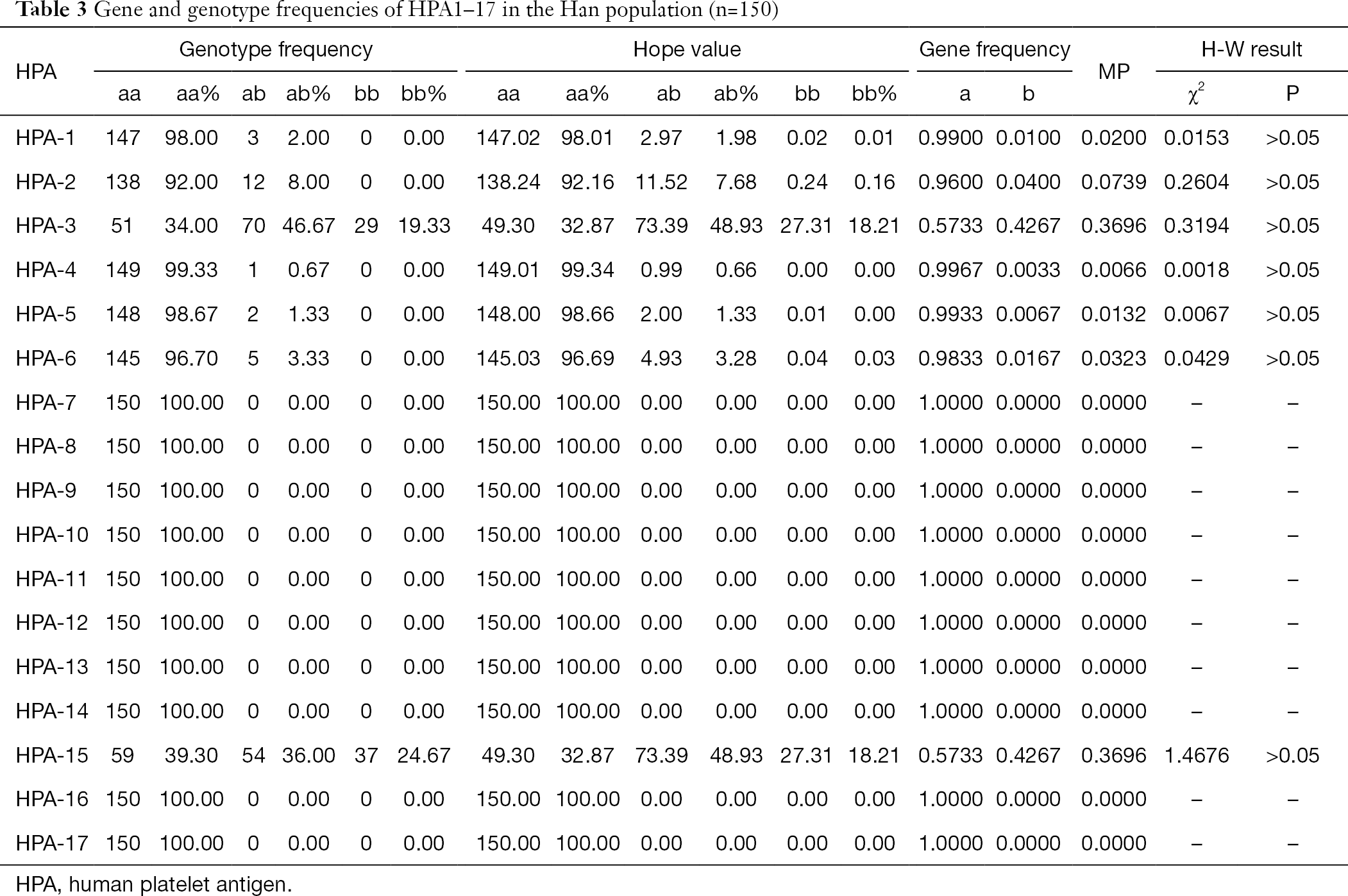 Comparison of gene frequency between the Achang, Jingpo and Han populations

The genotype was aa in the HPA-7, HPA9-12, HPA-14, 16 systems of the three populations, and the corresponding allele HPA-b was not detected. High polymorphism was found in HPA-3 and HPA-15 of these three ethnic groups. The HPA-1a system in the Achang group was significantly different from that of the Han population, and the HPA-2a system is significantly different between the Achang and Jingpo populations (P<0.05, Table 4). 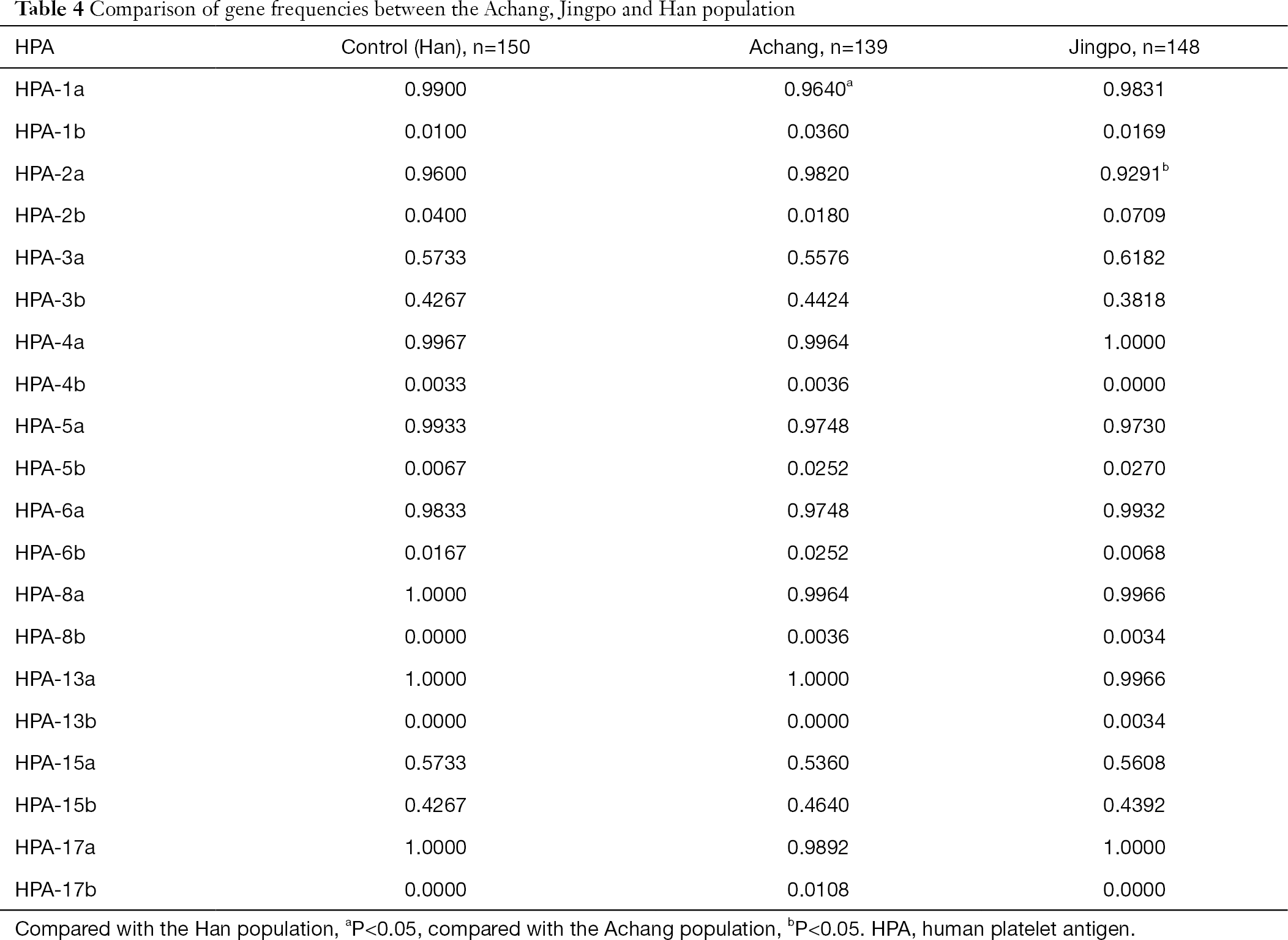 Platelet alloimmunity caused by HPA has been shown by many recent clinical studies to be related to NATP, ineffective PRT, PTP, transplant-related thrombocytopenia, arterial thrombotic diseases, and other diseases. Therefore, the diagnosis, prevention, and treatment of these diseases need to be based on the genotyping of platelet alloantigens.

In this paper, the Achang and Jingpo population, ethnic minority unique to Yunnan, were used as the research object. The HPA gene distribution and genotype frequencies in different populations were analyzed to study the relationship between platelet antigen polymorphisms and area, as well as ethnicity. Genotyping of HPA-1–17 indicated that the gene frequencies in the healthy population of Achang and Jingpo people in Yunnan were close to those of Han people in the same area, and they also displayed their own characteristics (Tables 1-4). The HPA-3 and HPA-15 systems of the three populations show high polymorphism, which is obviously higher than other HPA systems. Based on the results of MP value, the HPA-3 and HPA-15 systems were susceptible to the same immune response due to mismatched infusion. The genotypes of the HPA-7, HPA-9–12, HPA-14, 16 systems of the three populations were all homozygous aa, and the corresponding allele HPA-b was not detected. The gene frequency of ‘a’ in other HPA systems all exceeded 50%. The HPA-1a gene frequency of the Achang population is significantly different from the Han population, and the HPA-2a system is significantly different between the Achang and Jingpo populations (P<0.05).

To improve the safety and effectiveness of PRT, attention should therefore be paid to HPA alloimmunization and whether the differences of platelet antigen genes between different nationalities cause different immune effects. According to the frequency of HPA gene polymorphisms in this survey, the risk of platelet alloimmunization in the Achang and Jingpo population can be predicted. In a clinical setting, HPA-1a, HPA-2a, HPA-3, and HPA-15 are indicated to be important platelet antigen systems. HPA genotyping of ethnic minorities can provide a basis for the prevention and diagnosis of diseases caused by HPA alloimmunity and the establishment of a platelet donor data bank of ethnic minority area. As a marker of human genetic polymorphism, HPA can also be used in the research of forensic individual identification, human evolution and migration, as well as the correlation analysis of some diseases.

Conflicts of Interest: All authors have completed the ICMJE uniform disclosure form (available at http://dx.doi.org/10.21037/apm-20-1075). The authors have no conflicts of interest to declare.

Ethical Statement: The authors are accountable for all aspects of the work in ensuring that questions related to the accuracy or integrity of any part of the work are appropriately investigated and resolved. The study was approved by First Affiliated Hospital of Kunming Medical University (No. KMMLl2011122) and written informed consent was obtained from all patients. The study was conducted in accordance with the Declaration of Helsinki (as revised in 2013).