Severe acute pancreatitis (SAP) is one of the most common acute, severe abdominal diseases. Its clinical manifestation, disease course, and prognosis are complex and changeable (1). At present, the commonly used nursing methods of SAP in China mainly include conventional nursing, cluster nursing and quality nursing. But the results of these nursing methods are not satisfactory. Pancreatic encephalopathy is the most serious complication of SAP. The mortality of patients with severe pancreatitis who develop pancreatic encephalopathy increases to more than 70% (2). Delirium is one of the most common clinical manifestations of pancreatic encephalopathy. This is an acute, reversible, fluctuating state of brain dysfunction characterized by attention problems, altered consciousness, disorientation, and disordered cognition, thought, and sleep. Delirium is particularly prevalent in elderly people (3), and can lead to decreased self-care ability, prolonged hospital stay, and increased readmission rates in elderly hospitalized patients (4-6). Therefore, it is important to reduce the incidence and harmful effects of delirium. The current domestic and foreign evidence and related guidelines (7) do not recommend the sole use of drugs to prevent delirium; rather, non-drug multidisciplinary and multifactorial comprehensive intervention programs are strongly recommended to prevent delirium in elderly patients. The Hospital Elderly Life Program (HELP) is a hospital-based, patient-centered, nurse-led, National Institute for Health and Care Excellence (NICE) guideline-based, non-drug delirium prevention model (8). The HELP has been tested in more than 200 medical institutions worldwide, and evidence shows that it can prevent delirium and physical or cognitive decline in elderly patients in hospital. However, the HELP has not yet been used in delirium in elderly patients with SAP, so this study developed an improved HELP protocol and aimed to evaluate the effectiveness of the improved HELP in preventing delirium in elderly patients with SAP using a clinical randomized controlled trial. It is hoped that our findings will provide evidence for the further promotion and application of this model. We present the following article in accordance with the CONSORT Statement for Randomized Trials of Nonpharmacologic Treatments reporting checklist (available at http://dx.doi.org/10.21037/apm-20-913).

Subjects were 106 patients with SAP admitted to the Affiliated Hospital of Jiangnan University, China, from December 2016 to December 2019. Using the random number table method, subjects were randomly divided into a test group (53 cases) and a control group (53 cases). The inclusion criteria were the following: (I) meeting the SAP diagnostic criteria in the 2013 Chinese Guidelines for the Diagnosis and Treatment of Acute Pancreatitis (9); (II) aged 70 years or older; (III) expected hospital stay >2 weeks; and (IV) provision of written informed consent. The exclusion criteria were the following: (I) history of SAP; (II) coma; (III) complicated with mental disorders or disorders; (IV) dementia; (V) low immune function (such as neutrophil deficiency); and (VI) end-stage disease. This study was approved by the ethics committee of the Affiliated Hospital of Jiangnan University [(2016)KY039] and was performed in accordance with the Helsinki Declaration (revised in 2013). All subjects agreed and signed informed consent. 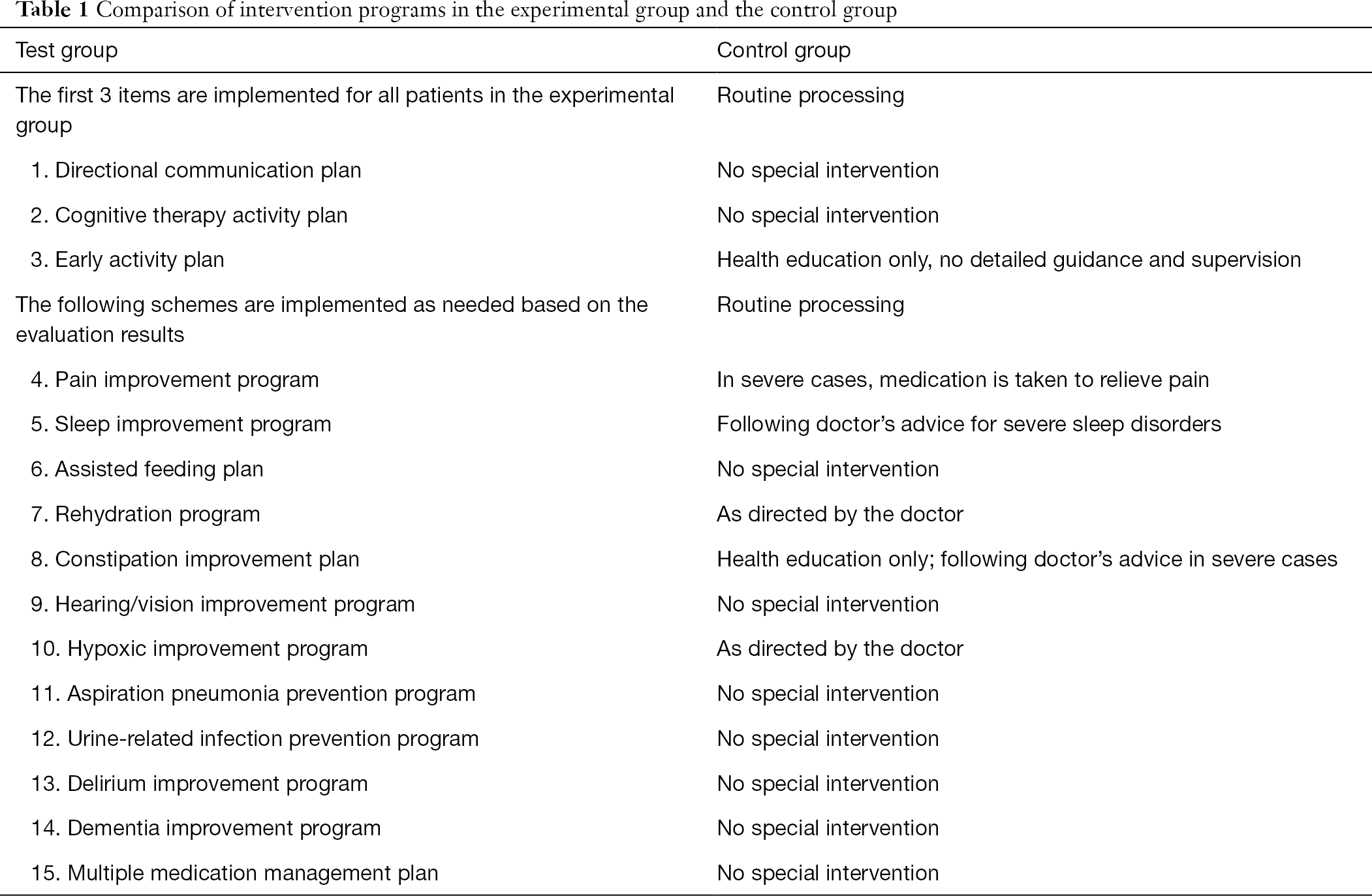 The 3D-Confusion Assessment Method scale (CAMS) was used to evaluate delirium incidence. This assesses 4 basic characteristics: (I) acute attacks and volatile changes; (II) inattention; (III) confusion of thinking; and (IV) changes in consciousness level. The scale has high sensitivity (94–100%) and specificity (90–95%) (9). Delirium is confirmed if the patient has the following combination of the above items: 1 and 2 plus 3, or 1 and 2 plus 4. 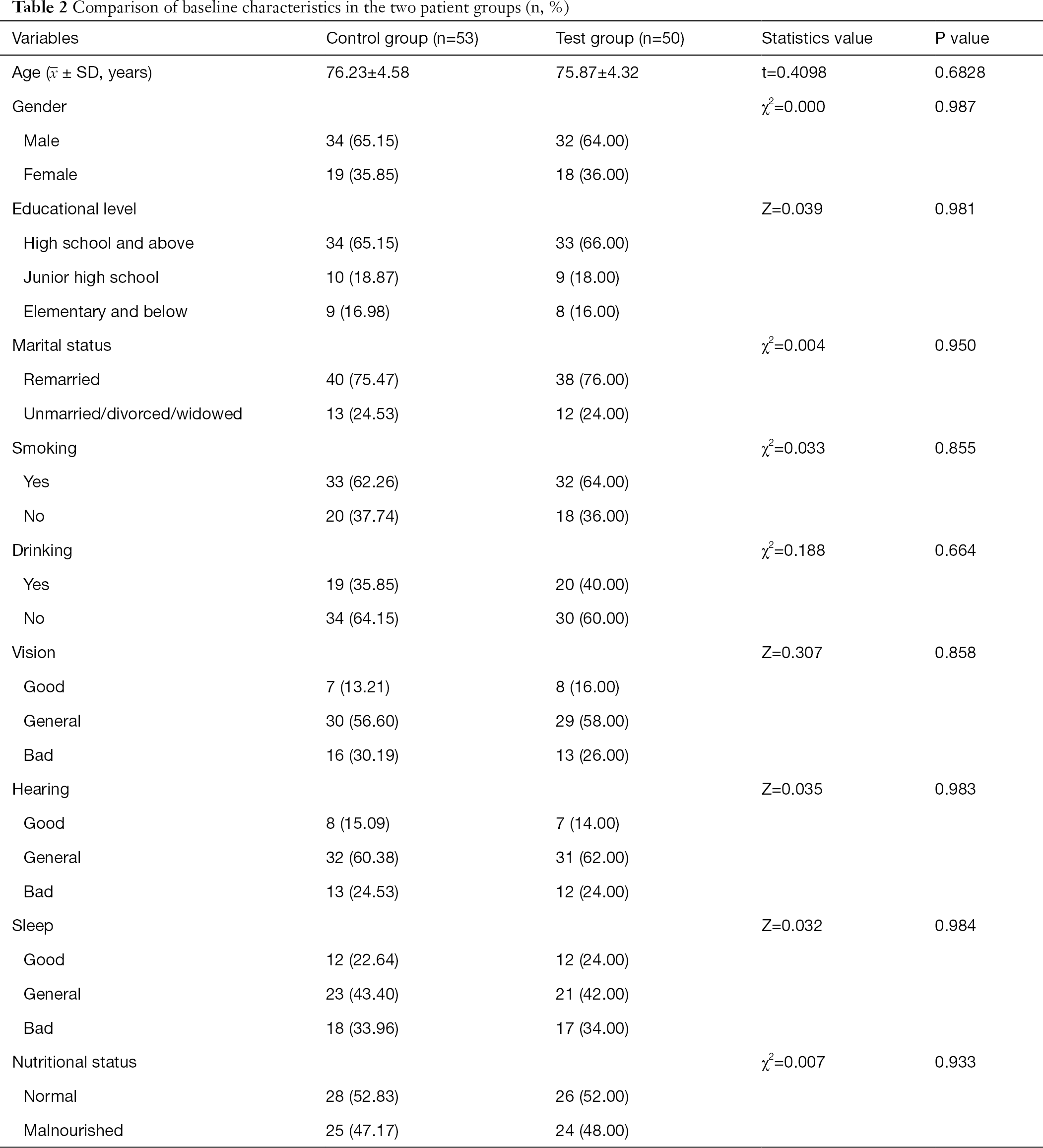 The severity of delirium was significantly lower in the experimental group than in the control group. Between-group differences in full CAM-S score (t=2.555, P=0.012) and MDAS score (t=4.2869, P=0.000) were statistically significant, as shown in Table 3.

Table 4 Comparison of cognitive function before and after intervention in the two patient groups (n, %)
Full table

Table 5 Comparison of self-care ability before and after intervention in the two patient groups (n, %)
Full table

The occurrence of delirium is the result of a combination of factors (13). The presence of more risk factors increases the risk of delirium (14). Prevention of delirium should be based on its risk factors and a comprehensive multidisciplinary non-drug intervention program (15). Delirium care for patients with conventional SAP is managed by nurses alone and lacks comprehensiveness. The HELP is a patient-centered, multidisciplinary, collaborative, comprehensive non-drug intervention for delirium risk factors, which can compensate for the limitations of routine care. The effects of the HELP have been confirmed by multiple studies. This study revised the HELP using relevant expert opinion from medical and health professionals. Compared with the conventional HELP, the improved HELP had the following contents: delirium improvement plan, dementia improvement plan and multiple medication management plan. The improved HELP enables the assessment of delirium risk factors, delirium diagnosis, and multidisciplinary intervention for elderly patients with SAP. The present findings show that the improved HELP protocol can reduce the incidence and severity of delirium in elderly patients with SAP. However, previous studies from a range of countries show conflicting findings regarding the value of the HELP intervention. Inouye et al. (14) proposed that the HELP intervention has no clear effect on improving the severity of delirium, whereas Marcantonio et al. (16) reported that it can substantially improve delirium severity. The evaluation of delirium severity is difficult, so the present study used 2 delirium severity scales to improve the reliability of the results.

The present findings indicate that the improved HELP protocol can improve self-care ability and cognitive function in patients with SAP. Impaired self-care ability and cognitive dysfunction in elderly people are closely related, and both are also risk factors for delirium (17). Cognitive function intervention is an important aspect of the improved HELP. Through daily targeted communication, such intervention can effectively prevent and improve patient cognitive function, and thus prevent delirium. This result is consistent with the research results of Reuben et al. (18). Early intervention to improve patient self-care is also an important aspect of the improved HELP. Early implementation of purposeful and planned activity interventions can maintain physical function, improve self-care ability, and reduce the incidence of delirium in elderly people. This result is consistent with the results of previous studies (8,19).

This study also found that the modified HELP protocol can shorten the length of hospital stay in elderly patients with SAP. However, Chen et al. (20) found that the HELP regimen did not significantly shorten the length of hospital stay. This may be related to regional differences in hospital management systems, disease severity, and discharge standards. Therefore, an in-depth analysis of other influencing factors is needed. The present study also evaluated patient satisfaction with medical care during hospitalization. The results show that the improved HELP increased patient satisfaction, was accepted by patients, and could be applied to current and future elderly medical care models in China.

Based on the time limitation, the sample size of this study is relatively small, the observation items are relatively limited, and there is a lack of in-depth and accurate laboratory indicators for the measurement. It is expected that there will be further studies on the efficacy of deeper efficacy HELP in the treatment of delirium in elderly patients with SAP in the future, so as to form a more objective and accurate conclusion.

The modified HELP targets the risk factors of delirium and provides individualized multidisciplinary non-drug interventions for elderly patients with SAP. The findings of this study indicate that the program can effectively reduce the incidence and severity of delirium, shorten the length of hospital stay, strengthen self-care ability and cognitive function, and improve patient satisfaction.

We thank this fund and the Affiliated Hospital of Jiangnan University for providing experimental equipment support for the study. We thank Diane Williams, PhD, from Liwen Bianji, Edanz Editing China (www.liwenbianji.cn/ac), for editing the English text of a draft of this manuscript.

Funding: This work was supported by the Translational Medicine Specialty of Wuxi Municipal Health Committee (ZM006).

Reporting Checklist: The authors have completed the CONSORT Statement for Randomized Trials of Nonpharmacologic Treatments reporting checklist. Available at http://dx.doi.org/10.21037/apm-20-913

Conflicts of Interest: All authors have completed the ICMJE uniform disclosure form (available at http://dx.doi.org/10.21037/apm-20-913). The authors have no conflicts of interest to declare.

Ethical Statement: The authors are accountable for all aspects of the work in ensuring that questions related to the accuracy or integrity of any part of the work are appropriately investigated and resolved. This study was performed in compliance with the ethical principles of the Declaration of Helsinki (as revised in 2013) and was approved by the Ethics Committee of the Affiliated Hospital of Jiangnan University [(2016)KY039]. All subjects agreed and signed informed consent.