The brain is the most common malignant tumor metastatic site, and about 25–40% of extracranial malignant brain metastases occur in the course of lung cancer. Common primary tumors such as lung cancer, breast cancer, digestive tract cancer, kidney cancer, lung cancer account for 60% to 70% of brain metastases. As state above, most NSCLC patients will eventually acquire brain metastases, with the highest incidence of brain metastases occurring in lung adenocarcinoma patients. Therefore, discussing the cost, efficacy, safety, and reliability of radiotherapy is an urgent clinical issue. For single brain metastasis with a Karnofsky performance score 0–2 and a good prognosis, surgery or stereotactic radiosurgery (SRS) is the first choice. Retrospective study data suggest that SRS and surgery have similar efficacy in patients with a single brain metastasis. Compared with whole brain radiotherapy (WBRT), SRS improves the median survival of patients with 1–3 brain metastases, and so SRS is the preferred treatment for these patients.

With the development of imaging technology and in-depth research, the location of brain metastatic tumors has become more accurate, which provides a possibility for the implementation of simultaneous integrated boost (SIB) radiotherapy for whole brain and intracranial metastatic sites. As SIB can also improve the local control rate and reduce the occurrence of recurrence, it may be ideal as a standard for radiotherapy in multiple brain metastases.

We present the following article in accordance with the CONSORT reporting checklist (available at http://dx.doi.org/10.21037/apm-20-1203).

Patients with lung cancer with brain metastasis who are not treated or who receive only symptomatic treatment, have a median survival of 1–2 months (1), but survival time can significantly be improved with effective treatment (2,3).

Radiotherapy of metastatic brain tumor combined with WBRT can increase the doses to the metastatic brain tumor and shorten the treatment time. However, further studies are needed to determine whether this treatment mode is helpful in improving the survival of patients. Therefore, in order to identify a standard for the above parameters, we conducted a prospective study in multiple brain metastases patients at initial treatment.

Participants in this study included lung adenocarcinoma patients who were first treated in Shandong tumor Hospital Radiation Ward from June 1, 2015 to June 31, 2017. The inclusion criteria for patients were the following: lung adenocarcinoma confirmed by bronchoscopy or lung biopsy; non-EGFR-mutated and non-anaplastic lymphoma kinase (ALK)-mutated as confirmed by genetic testing; presence of 5–9 brain metastases according to imaging, with or without other distant metastasis; no history of brain radiotherapy or surgery; no previous history of tumor in other organs and no major organ dysfunction; normal for blood routine, liver and kidney function, electrolyte, blood glucose, electrocardiogram, and other standard measures; an Eastern Cooperative Oncology Group (ECOG) score 0–2. The study was conducted in accordance with the Declaration of Helsinki (as revised in 2013). Approval was obtained from the ethics committee of our hospital (No. SDTHEC201503048), and the patients signed the informed consent and were followed up regularly as required. 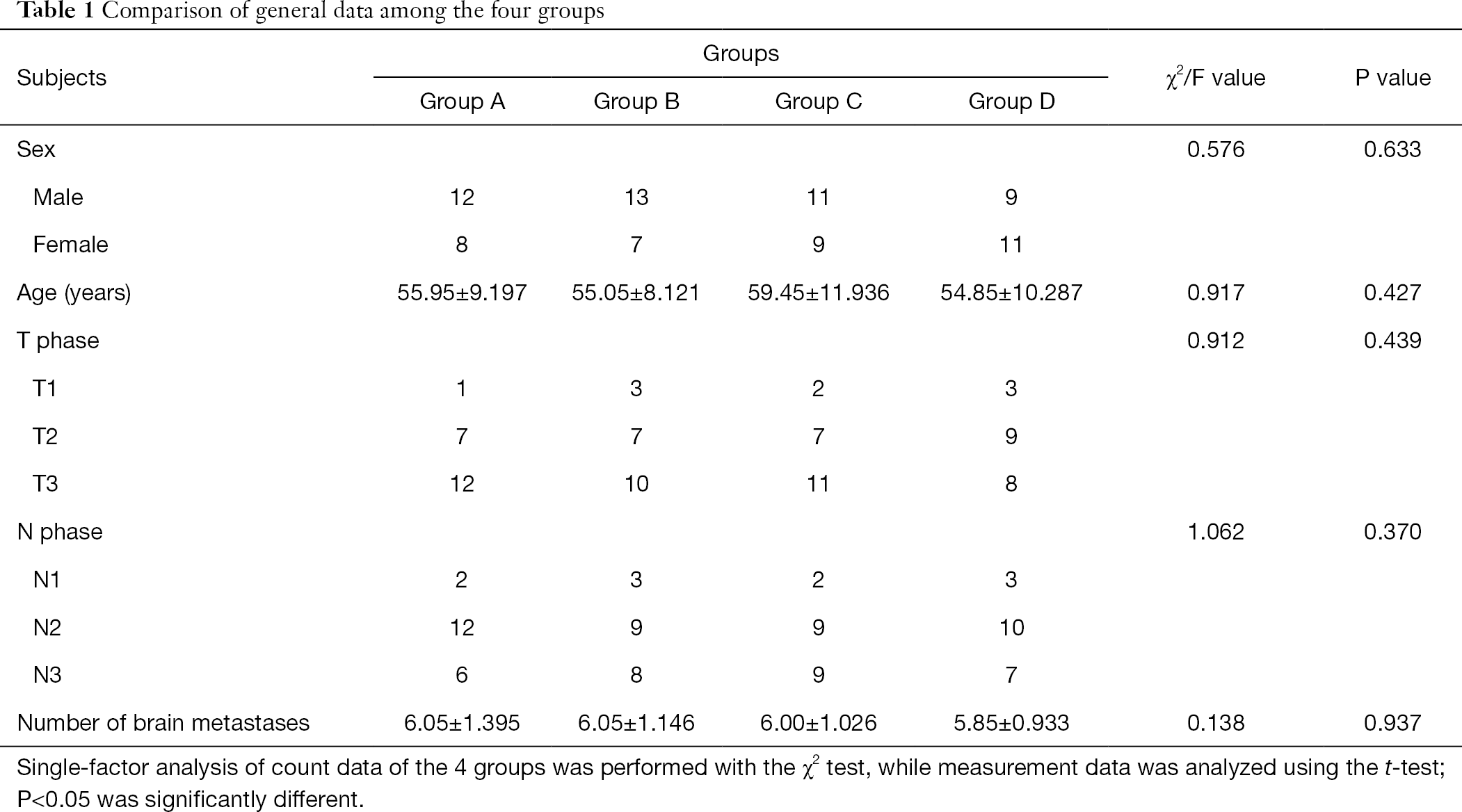 According to the different enrollment time, an informed agreement is signed, and the patients are randomly divided into groups, and the corresponding radiotherapy plan is done for radiotherapy.

Localization of the brain with computed tomography and magnetic resonance imaging

The patient was placed in supine position on the head fixation frame, and a thermoplastic mask was fixed. A 3-point marking method was adopted on the brow arch level of the mask surface to facilitate the repeatability and accuracy of head fixation and positioning, and to determine the reference points and isocentric points during planning. Philips Brilliance wide-aperture enhanced computed tomography (CT) scan with 3 mm lamellar thickness was used for continuous scanning, and the same method was used for enhanced MRI scanning. The scanned images were transmitted to the Varian Eclipse project system workstation, and the 2 images were fused to delineate the target volume.

The localized enhanced CT, MRI and CT and MRI fused images are shown in Figure 1A,B,C.

Delineation and planning of the radiotherapy target volume

For each patient, 4 radiotherapy plans were developed and paired to compare different dose parameters, including the dose to the tumor and the organ at risk. The main parameters included: GTV, CTV, PTV, crystal, brainstem, optic nerve, and spinal cord. Differences in treatment outcomes among the 4 groups were compared, and intracranial progression-free survival (IPFS) and OS were compared.

Statistical analysis was performed using SPSS software (version 17; SPSS, Inc., Chicago, IL, USA). Student’s t-test was utilized to compare the means of four groups. The χ2 test was used for all other comparisons. Univariate survival analysis was conducted using Kaplan-Meier analysis and the log-rank test. The significance level was α=0.05.

The dose of PTV-GTV and PTV-CTV, along with the dose of normal tissues such as crystals, brain stem, spinal cord etc. were statistically significant in the 4 groups (ρ=0.000) (Table 2). 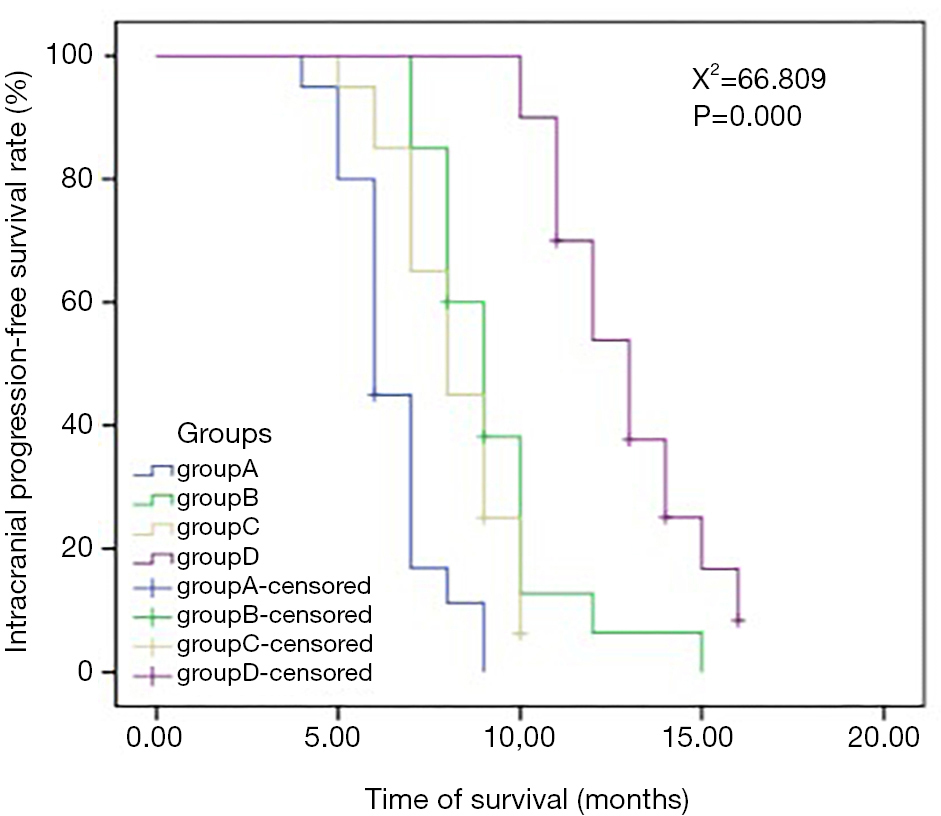 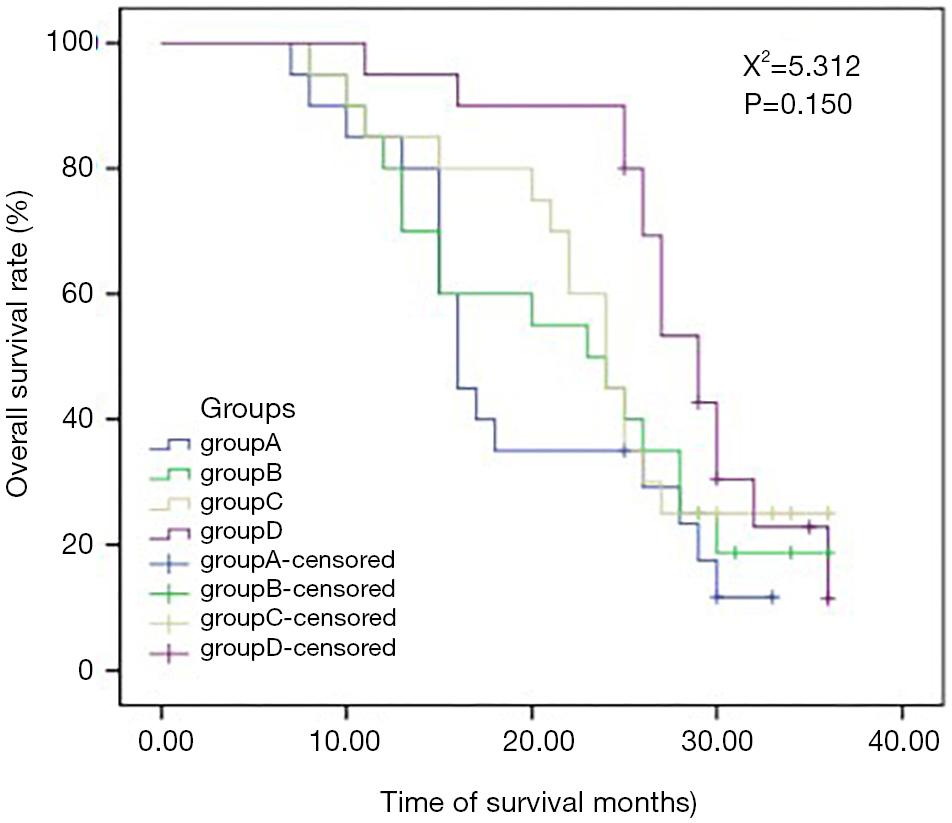 The poor status of the nervous system in patients of the 4 groups mainly manifested as memory decline, and there was a significant difference between the 4 groups in the comparison of memory decline at 6 months, 1 year, and 2 years after radiotherapy (Table 5).

WBRT dose is limited (generally less than 40–45 Gy), which can control the occurrence of intracranial transfer, but not for the existing intracranial metastatic site. Therefore, on the basis of WBRT, one of the clinically feasible radiotherapy methods is to add dose irradiation to the local metastatic tumor for the purposes of synchronous dose and intensity-modulated radiotherapy (14-16).

This prospective clinical controlled study found that radiotherapy with different doses and fractionated radiotherapy had significant differences in parameters, including the dose of metastatic tumor and the dose of normal tissue, with the dose of intracranial metastatic tumor being significantly different across the 4 groups (P=0.000). Different segmentation patterns and doses were used to prevent intracranial metastatic tumors and the whole brain as well, leading to the differences in local tumor control rates and IPFS survival. The doses from normal tissues and organs, such as bilateral crystals, the bilateral optic nerve, brainstem and spinal cord, were significantly different across the 4 groups (P=0.000). Therefore, with the increase of the radiotherapy dose of the whole brain and intracranial metastatic site, the dose of organs at risk also increases correspondingly, but within the tolerable range of organs at risk.

In the comparison of the 4 groups in terms of different doses and fractionated radiotherapy effects, the IPFS of the 4 groups of patients respectively was 6, 9, 8, and 13 months (Χ2=66.809, P=0.000), revealing a significant difference. The median OS of the 4 groups of patients (OS) was 16, 24.5, 24, and 30 months, respectively (Χ2=5.312, P=0.150), but there was no significant difference between 4 groups. WBRT in the intracranial metastasis group (SIB) (group D) showed a tendency of increased OS, but a larger sample size is needed to adequately confirm this. Studies have reported that WBRT improves local control rate but not the OS, which is similar to the results reported in the literature (2,13,17-20). The reasons for this may be as follows. Firstly, lung adenocarcinoma patients with brain metastases are often accompanied by metastases to other tissues or organs. Secondly, isolated metastatic sites or oligo-metastases can be cured, but for multiple metastatic sites, especially for multiple brain metastases, the radical radiotherapy dose cannot be reached because of the influence of the normal tolerated dose of organs at risk. Third, after the first course of chemoradiotherapy, the general condition of the patients decreases due to the adverse reactions of the treatment, and the patients are unable to tolerate chemoradiotherapy and other treatments, leading to the progression of the disease. Fourth, elderly patients with chronic complications such as coronary heart disease, diabetes, chronic lung disease, etc., cannot tolerate anti-tumor treatment; fifth, patients may not be able to continue treatment due to economic reasons. Thus, after the disease has stabilized for a while, the patient’s disease may progress slowly or rapidly, leading to death. SRS combined with WRBT has also been reported to improve survival over SRS (21).

Adverse effects on the nervous system among the 4 groups of patients mainly manifested as memory decline at 6 months, 1 year, and 2 years after radiation treatment. In the comparison of the 4 groups’ memory decline, it was found that as time went by, the incidence of nervous system adverse effects rose year by year, with the 4 groups having significant differences, and the WBRT and WRBT dose being the main factors affecting the nerve system function. A study reported that WRBT protects the hippocampus and can reduce the occurrence of nervous system adverse effects (22-24). As there is a low incidence of brain metastasis in the intracranial hippocampus and hippocampus, hippocampal protection is possible (25-27). On the basis of hippocampal protection, WRBT combined with intracranial metastasis SIB will be the focus and direction of future clinical research.

WBRT is one of the main treatment methods for multiple brain metastases. Simultaneous dosing on the basis of WRBT can improve the local control rate and potentially improve OS. Therefore, WRBT combined with intracranial metastasis plus SIB has potential as the standard mode of radiotherapy for multiple brain metastases. Adverse effects of the nerve system are related to the dose of WRBT and the time after radiotherapy. How to protect the hippocampus and reduce the adverse reactions to the nervous system while performing WRBT should be the focus of future research.

Funding: This work was financially supported by the Key Research and Development Project of Shandong Province (2015GSF118027), and the National Natural Science Foundation of China (81974467).

Reporting Checklist: The authors have completed the CONSORT reporting checklist. Available at http://dx.doi.org/10.21037/apm-20-1203

Conflicts of Interest: All authors have completed the ICMJE uniform disclosure form (available at http://dx.doi.org/10.21037/apm-20-1203). The authors have no conflicts of interest to declare.

Ethical Statement: The authors are accountable for all aspects of the work in ensuring that questions related to the accuracy or integrity of any part of the work are appropriately investigated and resolved. The study was conducted in accordance with the Declaration of Helsinki (as revised in 2013). Approval was obtained from the ethics committee of our hospital (No. SDTHEC201503048), and the patients signed the informed consent and were followed up regularly as required.