The total number of deaths from ischaemic heart disease increased from 7.3 million in 2007 to 8.93 million in 2017, which is leading cause of death and disability worldwide (1). More than 80% of sudden cardiac death events are caused by atherosclerotic coronary artery disease (2,3).

Acute myocardial infarction (AMI) occurs predominantly as a result of acute atherosclerotic plaque rupture in the coronary artery, accounting for 80% of AMI cases (4), which may result in activation of the clotting cascade with subsequent thrombus formation and occlusion of the artery. The mechanisms of arterial thrombosis are still unresolved, which are important because of their clinical implications.

Microparticles (MPs) are cell membrane phosphatidylserine ranging from 0.1 to 1.0 µm, which are containing information like mRNA, microRNAs (miRNAs), receptor and specific proteins of parent cell (5-7). MPs are expressed by cells during cell activation and apoptosis. Circulating MPs are involving in the atherosclerotic process, including chronic inflammation, and are also involving in intracoronary thrombosis and AMI (8-11).

Endothelial cell (EC) in activation and apoptosis release endothelial microparticles (EMPs). EMPs are found in the plasma of healthy individuals, but are severely increased in individuals with diabetic mellitus and coronary artery disease including atherosclerosis. EMPs can affect endothelial function through autocrine effects (10). Circulating EMPs in patients with acute coronary syndrome (ACS) impair endothelial dependence and NO-mediated vasodilation by activating the mechanisms of angiotensin II and NADPH (nicotinamide adenine dinucleotide phosphate) oxidase, thus accelerating endothelial senescence and thrombosis (12). Therefore, high concentrations of EMPs may cause vascular damage and aggravate endothelial dysfunction. Accordingly, EMPs are involving in the formation, development and rupture of atherosclerotic plaques, leading to the occurrence of acute cardiovascular events, which have certain clinical value in the diagnosis of cardiovascular diseases.

The aims of this study were to analyse the levels of EMPs and RMPs in AMI patients, to explore the correlation between EMPs, RMPs, coronary lesion counts and TIMI (Thrombolysis in Myocardial Infarction) risk stratification, and to determine the associations of MPs and AMI, meanwhile, to further investigate the efficiency of EMPs and RMPs as potential biomarkers of AMI.

We present the following article in accordance with the STARD reporting checklist (available at http://dx.doi.org/10.21037/apm-20-397).

The trial was conducted in accordance with the Declaration of Helsinki (as revised in 2013). The study was approved by the Ethics Committee of People’s Hospital of Xinjiang Uygur Autonomous Region (No. 2017041), and all patients provided a signed informed consent form.

We recruited 110 patients with AMI and 57 patients with non-CAD in the present study from January 2015 to January 2018. The study population was selected from the inpatient Department of Cardiology at the People’s Hospital of Xinjiang Uygur Autonomous Region.

The diagnostic criteria were based on previous studies as follows: (I) patients with AMI who experienced chest pain for more than 20 min, with an ECG showing elevation or depression of ST segments in at least two adjacent leads within 24 hours of onset, as well as cardiac troponin T (cTnT) >0.1 µg/L (normal value <0.05 µg/L); (II) the STEMI patients need to emergency PCI, whose chest pain were within 12 hours; (III) patients had chest pain, ECG changes and normal troponin, whose coronary angiography results were normal, who were considered non-coronary artery disease (non-CAD).

The exclusion criteria were as follows: (I) serious liver or kidney dysfunction; (II) cancer or other debilitating disease; (III) diseases of the haematopoietic system; (IV) uncontrolled infection; and (V) infarction in another location of the body, such as cerebral infarction or pulmonary embolism (VI) coronary artery spasm.

Blood samples were centrifuged at 3,500 g at room temperature for 10 min to separate the bleeding cells, and the supernatant was platelet-rich plasma (PRP). PRP centrifuged a large number of platelets after centrifugation at 2,000 g and 10 °C for 10 min, the supernatant was platelet-poor plasma (PPP), which followed by three centrifugations at 23,000 g at 4 °C for 45 min. The supernatant was discarded, and the precipitate was platelet-free (PFP). Subsequently, 200 µL of phosphate-buffered saline (PBS) was added, and the samples were mixed for 5 min. Each sample was labelled with the date of collection and the patient admission number, which then immediately was stored at −80 °C for subsequent analysis of MPs.

TEM performed the MPs of that obtained by centrifugation (Figure 1). 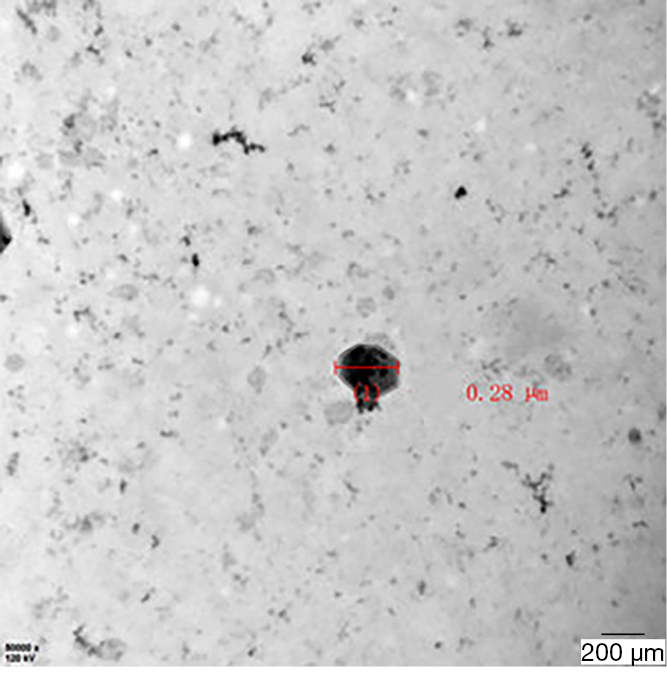 Quantitation of EMPs and RMPs by flow cytometry

The PFP was rapidly dissolved at room temperature. Next, 2.5 µL of sample, 100 µL of the Ca2+ vector A23187, 100 µL of binding buffer and 5 µL of Annexin V were thoroughly mixed together at room temperature for 20 min. Subsequently, 2.5 µL of endothelial cell-specific monoclonal antibody (CD31) and red blood cell-specific monoclonal antibody (CD235a) were added, followed by thorough mixing at room temperature for 20 min. Finally, 175 µL of PBS was added. FACSAria IITM analysis was performed. The number of cells in the portal was 10,000 wh each time, reading at a flow rate of 35 µL/min for 30 seconds, counting the number of EMPs and RMPs and analyzing the fluorescence percentage of ECs and red blood cells labeled with specific monoclonal antibodies to further characterize EMPs and RMPs. The final peripheral EC- and red blood cell-derived MPs are expressed as percentages.

Continuous variables are presented as the mean ± standard deviation (SD) or the median ± inter-quartile range (IQR) and were compared with Student’s t-test or the Mann-Whitney U test (if not normally distributed). Fisher’s exact test was used for categorical data.

The TIMI risk score is a clinical risk score for determining the prognosis of patients with ACS. The TIMI risk scores of the AMI patients are evaluated and divided into low-, medium- and high-risk groups. Pairwise comparison was conducted using the variance test. The EMPs levels in the three groups showed statistically significant differences (P<0.05), with the highest EMPs levels in the high-risk group and the lowest EMP levels in the low-risk group, while the RMP levels were not statistically significant, as shown in Table 3. 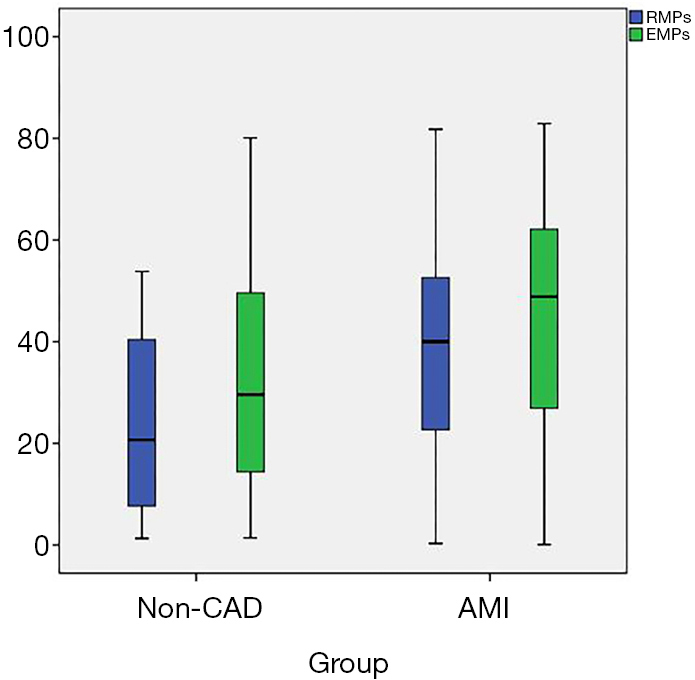 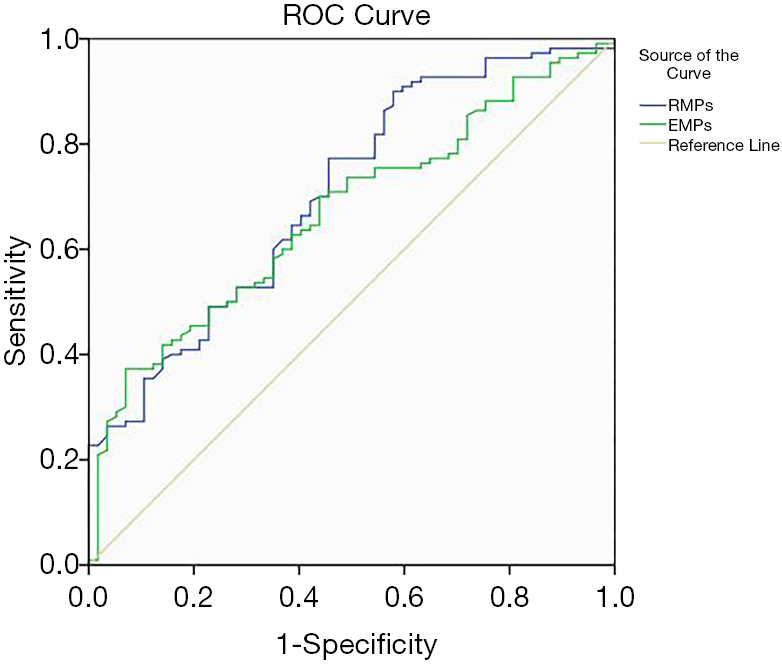 Atherosclerosis is the basis of coronary heart disease, and thrombosis due to atherosclerotic plaques is the main cause of acute and serious clinical complications of atherosclerotic disease (14).

MPs deliver biological messages to target cells and regulate EC dysfunction, inflammation (15), oxidative stress (16), angiogenesis (17), and permeability (18), processes that are intricately implicated in the pathogenesis of CAD and its sequelae.

Compared to control patients, procoagulant EMPs are found in greater circulatory concentrations in ACS patients and may contribute to intracoronary thrombus generation (19). EMPs release is triggered by various stimuli, which is followed by activation of various pathways that can collectively advance the progression of atherogenesis. Most importantly, oxidative stress, endogenous molecules (TNF-α, PDGF, and interleukin) and apoptosis induce EMPs are released to undergo functional changes in blood vessels, eventually leading to the pathology of atherosclerosis.

Recent studies have shown that RMPs are released into the circulating blood due to worsening thrombosis conditions and can be detected in patients with STEMI. Thus, RMPs are considered as a new marker of persistent thrombosis (20). One study found that CD235a RMP levels in the peripheral blood of STEMI patients were higher than the control group (11).

The results of our study can be summarized as follows: (I) our results suggest that the levels of EMPs and RMPs were higher in patients with AMI the non-CAD population, which was consistent with our previous findings (21-23); (II) analysis of the AMI subgroup revealed no statistically significant difference in EMPs and RMPs levels between the STEMI and no-STEMI patients; (III) the levels of EMPs and RMPs in peripheral blood in the multivessel coronary artery disease group were significantly higher than the single-vessel disease group, suggesting that EMPs and RMPs may be involved in AMI and may be correlated with several coronary artery diseases; (IV) the results of our study showed that EMPs levels in the high-risk group and the low-risk group were associated with the highest TIMI risk scores, but no difference in RMPs levels were found among the three groups; (V) last, we examined the diagnostic value of EMPs and RMPs in discriminating patients with AMI from patients with no-CAD. Our results showed that the AUC of circulating EMPs and RMPs were 0.706 and 0.668. This evidence demonstrated that the high levels of EMPs could more likely to be potential biomarkers than RMPs to distinguish patients with AMI from patients with no-CAD.

The present work must be interpreted with considering the following limitations. First, the analysis of EMPs and RMPs levels in the AMI subgroup required to expand sample size to further assess differences. The TIMI score is a risk assessment parameter for the prognosis of patients with ACS. Variables from a TIMI trial population are selected by multivariate logistic regression analysis to select independent variables for prognostic evaluations, which are helpful for judging the clinical prognosis of patients and selecting the best treatment plan. This study analysed only TIMI risk stratification in EMPs and RMPs levels, and no prognostic correlation analysis was performed. The specific mechanism of EMP and RMP involved in acute thrombotic events of AMI is still unclear, so related cell culture and animal experiments must be added. EMPs and RMPs should be dynamically monitored after AMI to further assess whether those can be used as early diagnosis biomarkers of AMI.

Funding: This work was supported by the National Natural Science Foundation of China (No.: 81760068). Project of Xinjiang Uygur Autonomous Region People’s Hospital (No.: 20190207).

Reporting Checklist: The authors have completed the STARD reporting checklist. Available at http://dx.doi.org/10.21037/apm-20-397

Conflicts of Interest: All authors have completed the ICMJE uniform disclosure form (available at http://dx.doi.org/10.21037/apm-20-397). The authors have no conflicts of interest to declare.

Ethical Statement: The authors are accountable for all aspects of the work in ensuring that questions related to the accuracy or integrity of any part of the work are appropriately investigated and resolved. The trial was conducted in accordance with the Declaration of Helsinki (as revised in 2013). The study was approved by the Ethics Committee of People’s Hospital of Xinjiang Uygur Autonomous Region (No. 2017041), and all patients provided a signed informed consent form.