Particulate matter (PM2.5) refers to a particle with an aerodynamic equivalent diameter ≤2.5 µm in ambient air and is an important component of particles in ambient air. Cell experiments have indicated that PM2.5 has toxic effects on cells (1). It can induce cells to produce active oxygen, resulting in oxidative stress reactions and, eventually, DNA damage (2). Animal experiments have indicated that PM2.5 exposure by intratracheal instillation can induce morphological changes and oxidative damage in lung tissues of mice (3). PM2.5 is closely associated with health. It is the top risk factor responsible for reduced longevity in some areas (4). Epidemiological surveys have shown that 40.3% of stroke deaths, 26.8% of deaths from local ischemic heart disease, and 23.9% of lung cancer deaths are associated with high PM2.5 concentrations (5). Molecular studies shows that PM2.5 caused a reduction of mitochondrial markers in mitochondrial dysfunction, including peroxisome proliferator-activated receptorycoactivator-1 (PGC-1), Nuclear respiratory factor-1 (Nrf-1), mitochondrial transcription factor A (TFAM), which suggest that energy metabolic disorders and mitochondrial dysfunction may be the important contributors to pulmonary injuries in response to PM2.5 exposure. Lutein in humans derives from dietary intake because it cannot be synthesized in the body, and it has a relatively high content in dark green vegetables (6). As a food ingredient, it was approved as a new resource food in the No. 12 document in 2008 announced by the former Ministry of Health. As a natural antioxidant, it can inactivate singlet oxygen through physical or chemical quenching effects, capture hydroxyl radicals, bind to lipids to inhibit and prevent lipid oxidation, and reduce free radical damage to biomembranes (7). Previous lutein studies have mainly focused on its protective effect on the retina (8,9). It has been shown that lutein can significantly improve light-induced retinal oxidative damage (10). The concentration of lutein in lung tissue is 0.10–2.30 µmol/L (11). However, its role in the respiratory tract, especially during injury, is rarely reported. Therefore, this study observed the damaging effect of PM2.5 exposure in rat lung and the effect of lutein in antagonizing this damage in order to investigate the protective effect of lutein in respiratory tract injury caused by PM2.5 in rats.

We present the following article in accordance with the ARRIVE reporting checklist (available at http://dx.doi.org/10.21037/apm-20-1138).

A total of 80 specific-pathogen-free (SPF) male Sprague-Dawley (SD) rats with a body weight of 180–220 g were selected and purchased from Beijing HFK Bioscience Co., Ltd. [SCXK (Beijing) 2014-004]. The rats were housed in the animal laboratory of the Institute of Materia Medica, Chinese Academy of Medical Sciences & Peking Union Medical College with alternating light and dark and access to food and water ad libitum.

The study was approved by The Animal Care &Welfare Committee Institute of Materia Medica, Chinese Academy of Medical Sciences & Peking Union Medical College (ID: 00005303), and is in compliance with its guidelines for the care and use of animals.

Between September 2016 and February 2017, PM2.5 samples were continuously collected for 6 months using an air particle sampler (flow 1 m3/min) on the platform outside the Beijing Institute of Nutritional Sources. The glass fiber filter for collecting samples was replaced once every 24 h, and the sample collection height was 5–8 m. The collected glass fiber filters with attached fine particles were cut into 1 cm × 1 cm pieces, immersed in deionized water, and eluted 3 times (30 min each) using low-temperature ultrasonication in an ultrasonic cleaner. The elution solution was filtered through 6 layers of gauze and centrifuged at 12,000 r/min for 30 min at 4 °C to collect the lower suspension. The elution suspension was lyophilized using a vacuum freeze dryer to obtain PM2.5 samples after water was completely vaporized. Samples were sealed and stored in a −20 °C freezer. Before use, samples were thawed at room temperature. The samples were then weighed and prepared as suspensions at the required concentration using normal saline. Samples were mixed thoroughly by ultrasonication and stored at 4 °C.

Serum and BALF were collected to measure the levels of IL-6, IL-8, and TNF-α according to the kit instructions.

BALF was collected to measure the levels of LDH, ACP, and AKP according to the kit instructions.

Left lung tissue without lavage was collected and fixed in 10% formalin for 48 h. Lung tissue from the middle section was collected, embedded in paraffin, and sectioned. The sections were stained with hematoxylin-eosin (HE), and the extent of lung tissue injury and inflammatory cell infiltration was observed under an electron microscope.

Lung tissue injury and the protective effect of lutein pretreatment on rat lung tissues are shown in Figure 1. In the normal group, lung tissues had a normal structure, the bronchial epithelium was intact, and there was no exudate in the lumen. In the PM2.5 exposure group, the lumen was narrow, the tube wall shrank, there was exudate in the lumen, and there was a large amount of inflammatory cell infiltration. Inflammatory cell infiltration in all lutein dose groups decreased. 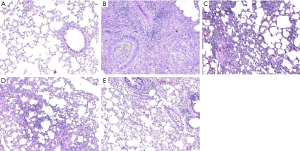 The oxidative damage effect of PM2.5 and the antagonizing effect of lutein in rats

The effect of PM2.5 on cytokines and the antagonizing effect of lutein in rats

The effect of PM2.5 on IL-6 and the intervention effect of lutein 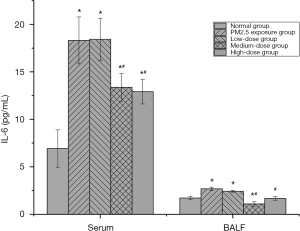 The effect of PM2.5 on IL-8 and the intervention effect of lutein

IL-8 is an inflammatory cytokine with chemotactic functions. Its key function is to attract neutrophils to inflammatory sites. Many studies (13,14) have confirmed that IL-8 increases lymphatic metastasis in lung cancer and tumor microvascular density. Furthermore, it is an important indicator for monitoring the treatment effects and evaluating the prognosis of patients with non-small cell lung cancer. IL-8 levels in the serum and BALF of rats were analyzed, and the results are shown in Figure 3. Serum IL-8 levels in rats in the PM2.5 exposure group and all lutein dose groups significantly increased (P<0.05), indicating that PM2.5 significantly promoted IL-8 secretion in monocytes and macrophages. The inhibition of IL-8 secretion with different doses of lutein was not significant. The analysis of IL-8 indicated that different doses of lutein could reduce the accumulation of the inflammatory cytokine IL-8 in lung tissues, thus alleviating the accumulation of inflammatory cytokines and neutrophils in lung tissues caused by PM2.5 exposure and reducing the degree of the inflammatory reaction in lung tissue. 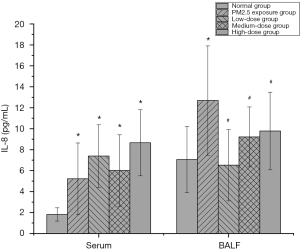 The effect of PM2.5 on TNF-α and the intervention effect of lutein

TNF-α is the inflammatory cytokine involved earliest in the inflammatory response. It is an indicator that reflects the degree of cellular inflammatory action and can activate mononuclear macrophages, neutrophils, and vascular endothelial cells, resulting in the release of a large number of inflammatory cytokines and inflammatory tissue injury. The serum TNF-α level in rats was detected, and the results are shown in Figure 4. Compared with that in the normal group, the TNF-α levels in the serum and BALF of rats in the PM2.5 exposure group dramatically increased, indicating that PM2.5 caused serious inflammatory effects. After the administration of different doses of lutein, the TNF-α levels in the serum and BALF of rats both significantly decreased (P<0.05), and the degrees of reduction in TNF-α in the medium- and high-dose groups were higher than that in the low-dose group. These results indicated that lutein alleviated the release of the pro-inflammatory cytokine TNF-α induced by PM2.5. 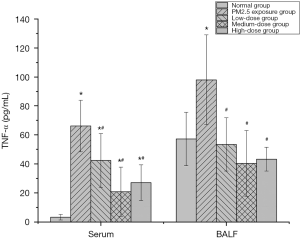 The effect of PM2.5 on cell damage in rat lung tissues and the antagonizing effect of lutein

PM2.5 is a mixture with complex components. With differences in cities, seasons, and time, its composition and hazards also vary. PM2.5 enters the blood system through the lung barrier. Long-term exposure has direct damaging effects on lung tissue. Cohort studies showed that for every 10 µg/m3 increase in PM2.5, the overall mortality rate for the population, the incidence of cardiopulmonary disease, and the incidence of lung cancer increased by 4%, 6%, and 8%, respectively (15). Animal studies (16-22) indicated that the percentage of inflammatory cells increased as a result of oxidative damage and the inflammatory response, that the levels of MDA, NOS, AKP, and ACP increased, and that the levels of inflammation-related cytokines IL-6, IL-8, and TNF-α increased. This study combined the above sensitive indicators to establish a PM2.5 oxidative damage model. The results showed that after exposure to 10 mg/kg PM2.5 continuously for 7 days, the levels of damage indicators, including MDA, NOS, 8-OHdG, ACP, AKP, IL-6, IL-8, and TNF-α all significantly increased, whereas the level of the antioxidant indicator GSH decreased. These results indicated that PM2.5 caused oxidative damage and inflammatory symptoms in lung tissue. Therefore, a PM2.5 damage model was established using the above method.

The hazards caused by PM2.5 have received widespread attention. Management measures for PM2.5 health hazards have also gradually improved. It is very necessary to perform studies on effective health protection measures for the management of air pollution. Previous studies on the function of lutein mainly focused on visual fatigue and the liver. For example, lutein can decrease the lipid oxidation marker MDA and the level of DNA oxidation biomarker 8-OHdG in the retina and improve oxidative damage in retinal tissue (10,23). In liver tissue (24-30), lutein can increase the activity of NA+-K+-ATPase and mitochondrial Ca2+-ATPase, increase the levels of SOD and GSH, and decrease the activities of TNOS and iNOS and the level of NO; in addition, it can increase HO-1 expression and downregulate TLR4 mRNA expression to exert its anti-oxidative stress function. These results indicate that lutein, in different tissues, has excellent biological activities such as anti-inflammatory and antioxidative functions. Therefore, this study performed animal experiments to observe the damaging effect of PM2.5 in rat lung tissues and validate the antagonizing effect of lutein on PM2.5 in lung tissues. The analysis of serum MDA, SOD, GSH, NOS, and 8-OHdG showed that PM2.5 increased the oxidative damage indicators MDA and NOS, increased the DNA damage indicator8-OHdG, and decreased GSH; after the administration of lutein, oxidative damage was relieved. The analysis of inflammatory cytokines IL-6, IL-8, and TNF-α showed that PM2.5 significantly promoted the expression of pro-inflammatory cytokines to increase the development of inflammation in lung tissues. Lutein reduced the secretion level of inflammatory cytokines to alleviate the development of inflammation. LDH, ACP, and AKP directly reflect the degree of cell damage. After PM2.5 exposure, cell membrane permeability decreases after cell membrane damage, and large amounts of LDH, ACP, and AKP are released. Lutein intervention can significantly alleviate cell damage caused by PM2.5 to maintain cell membrane permeability.

This study confirmed that lutein in lung tissues antagonized the respiratory tract injury caused by PM2.5. Its protective mechanism was directly associated with its antioxidant and anti-inflammatory effects to alleviate direct cell damage resulting from PM2.5. The investigation of PM2.5 damage and mechanism of antagonism to further implement interventional measures targeting different components of PM2.5 can provide basic data for the prevention of health hazards caused by particles and for the development of lutein-related products.

Funding: The work is supported by the National Key Research and Development Program of the Ministry of Science and Technology of the People’s Republic of China (No. 2016YFD0400601).

Reporting Checklist: The authors have completed the ARRIVE reporting checklist. Available at http://dx.doi.org/10.21037/apm-20-1138

Conflicts of Interest: All authors have completed the ICMJE uniform disclosure form (available at http://dx.doi.org/10.21037/apm-20-1138). The authors report grants from Ministry of Science and Technology of the People’s Republic of China, during the conduct of the study.

Ethical Statement: The authors are accountable for all aspects of the work in ensuring that questions related to the accuracy or integrity of any part of the work are appropriately investigated and resolved. The study was approved by The Animal Care &Welfare Committee Institute of Materia Medica, Chinese Academy of Medical Sciences & Peking Union Medical College (ID: 00005303), and is in compliance with its guidelines for the care and use of animals.