Ulcerative colitis (UC) is a chronic non-specific inflammatory disease of the intestine, which is characterized by recurrent diarrhea, mucopurulent bloody stools, internal urgency, and abdominal pain (1,2). In addition to intestinal symptoms, there are also a variety of extraintestinal symptoms. The exact etiology and pathogenesis of UC are still unknown. Currently, UC is considered to be related to genetic, environmental, immune, infectious, and other factors, with immune-inflammation injury being the most recognized mechanism (3).

Clinically, aminosalicylic acid, glucocorticoid, immunosuppressant, and biological agents are mainly used in the treatment of UC. The long-term use of these drugs will cause greater side effects, and especially impact reproductive function. Recent studies have shown that ginger has a wide range of pharmacological effects, including those of anti-inflammation, antioxidation, immune enhancement, etc. Gingerol is the main spicy substance extracted from ginger, comprising more than 10 components (4), of which 6-gingerol has the highest ingredient conten and the strongest biological activity. A previous study (5) found that 6-gingerol can inhibit the primary and secondary inflammatory reactions in adjuvant arthritis rats by inhibiting the cyclooxygenase and lipoxygenase in the metabolism of arachidonic acid, and reducing the biosynthesis of inflammatory mediators, prostaglandin and leukotriene. Ajayi et al. (6,7) found that 6-gingerol could alleviate intestinal inflammatory damage and improve weight loss in mice with colitis.

Regulatory T cells (Tregs) and Thl7 cells are the 2 main T cell types involved in immune-inflammation response. Thl7 cells mainly secrete IL-17 to mediate inflammatory response (8), while Treg cells mainly secrete inhibitory cytokine, IL-10 (6), to maintain immune tolerance. Treg cells and Th17 cells restrict each other to maintain immune balance. It was reported (9-11) that Thl7 cells in intestinal mucosa and peripheral blood of UC patients increased significantly, while Treg cells in intestinal mucosa increased and Treg cells in peripheral blood decreased, suggesting that the imbalance of Treg/Thl7 cells may be involved in the development of UC. In a previous study, we regulated the cell balance of Th17/Treg and relieved the inflammatory response systematically and locally (not published), thus identifying 6-gingerol as an effective treatment for dextran sulfate sodium (DSS)-induced UC in mice; however, the underlying mechanism of this effect remains elusive.

In this study, we used a DSS-induced colitis model in mice to observe the interventional effect of 6-gingerol on colitis in mice and explore its anti-inflammatory mechanism. We hope this will provide a theoretical basis for the treatment of UC with 6-gingerol.

We present the following article in accordance with the ARRIVE reporting checklist (available at http://dx.doi.org/10.21037/apm-20-903).

Animal experiments were approved by The Third People’s Hospital of Wuxi Medical Ethics Committee, and is compliance with the institutional guidelines for the care and use of animals.

Male BALB/c mice (20–22 g) at 6–8 weeks of age were purchased from Sino-British SIPPR/BK Lab., Animal Co., Ltd. (Shanghai, China) and housed in the animal facility in accordance with the approved protocol. As shown in Table 1, mice were Randomly divided into 6 groups. All the mice were monitored for weight loss, and sacrificed after 2 weeks.

Table 1 Treatment of mice in each group
Full table

All samples were fixed in 4% formaldehyde solution and embedded in paraffin. The paraffin-embedded sections were dewaxed in xylene, rehydrated in graded alcohols, and then the sections were pretreated for heat-mediated antigen retrieval with sodium citrate buffer (10 mM, pH 6.0) via the microwave method for 20 min. Endogenous peroxidase activity was suppressed by exposure to 3% hydrogen peroxide for 10 min. Slides were then blocked with 5% bovine serum albumin (BSA), incubated with diluted primary antibody Phospho-NF-κB p65 (p-p65) (1:1,400, CST, USA) or Phospho-IκBα (p-IκBα) (1:200, CST, USA) for 1 h at 37 °C, and then incubated with secondary antibody at a dilution of 1:2,000 (CST, USA) for 20 min at 37 °C. Slides were visualized with diaminobenzidine (DAB) and counterstained with hematoxylin for microscopic examination.

The proteins were extracted from bowel tissues according to the manufacturer’s instructions. The concentration of proteins was determined by bicinchoninic acid (BCA). Then, approximately 25 µg of protein was denatured for 10 min at 95 °C, subjected to 10% denatured Sodium dodecyl sulfate-polyacrylamide gel electrophoresis (SDS-PAGE), and blotted onto polyvinylidene fluoride (PVDF membrane) (100 V, 60 min). The membranes were blocked with 5% non-fat milk for 1 h at room temperature, incubated with p65 and p-p65 (CST, USA) at a dilution of 1:500, and incubated with IκBα and p-IκBα (CST, USA) at a dilution of 1:500 at 4 °C overnight. Then, the membranes were reacted with horseradish peroxidase-conjugated secondary antibody IgG (Jackson, MS, USA) at a dilution of 1:5,000 at 37 °C for 1 h. After the final wash, the membranes were developed using an enhanced chemiluminescence detection kit. 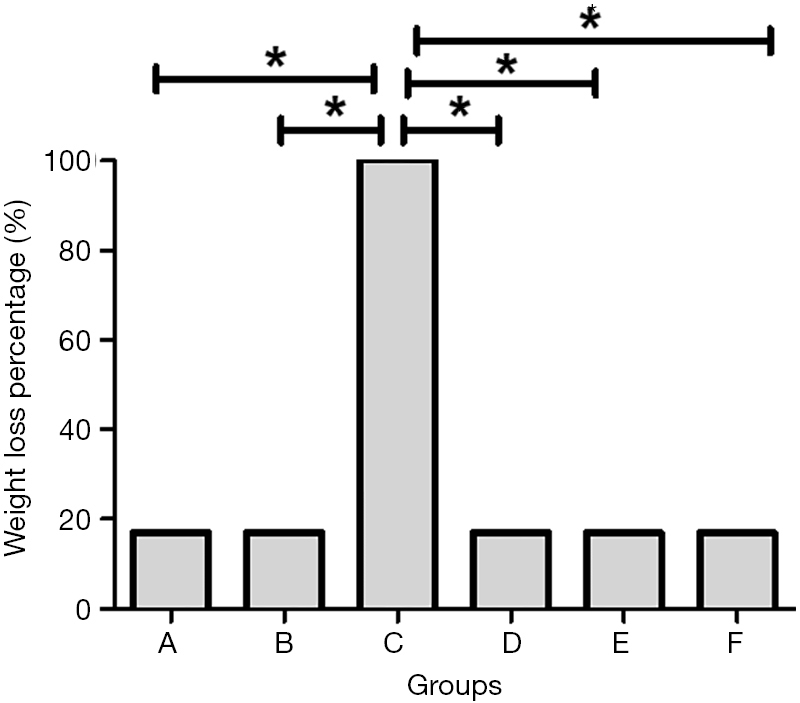 Cytokine staining in bowel tissues of each group

As shown in Figure 2, in group A and group B, there were normal epithelium, normal gland structure, and complete crypt and goblet cells, with slight IL-17-positive staining (brown staining) in the stroma (Figures 2A and 2B). Additionally, DSS destroyed crypt and goblet cells on the surface of the mucous membrane, it caused granulation hyperplasia, and prompted a large number of inflammatory cells to infiltrate into the submucosa and muscularis. Immunohistochemical staining showed that the amount of IL-17-positive staining was increased (Figure 2C). 6-gingerol (Figure 2D,E) and mesalazine (Figure 2F) treatment gradually repaired the damaged glandular structure, and IL-17-positive staining was decreased compared to DSS treatment. 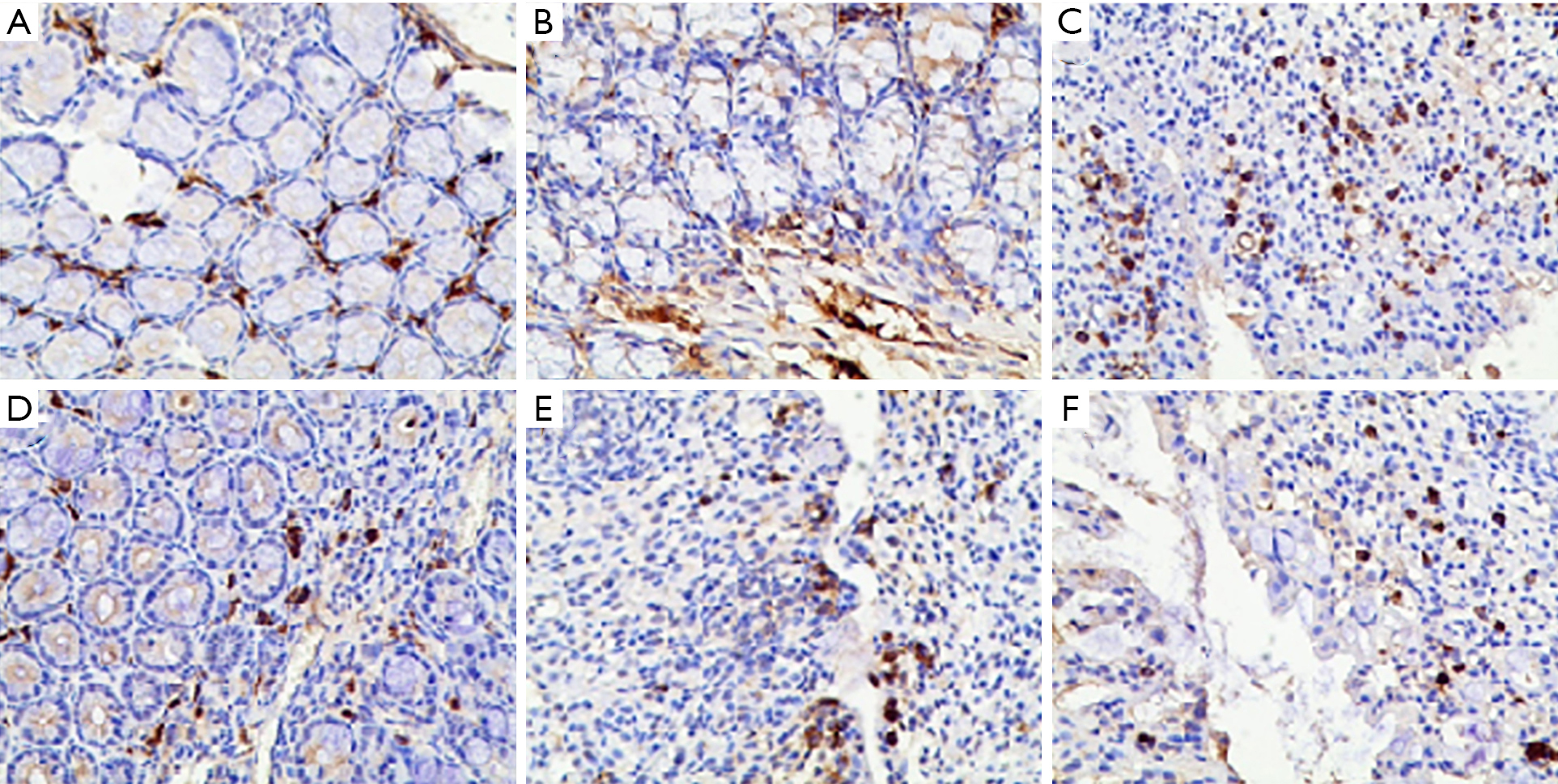 For IL-10 staining, we found that there was normal epithelium, normal gland structure, and complete crypt and goblet cells, with slight IL-10-positive staining (brown staining) in the stroma in group A and group B (Figure 3A,B). Additionally, DSS destroyed crypt and goblet cells on the surface of the mucous membrane, caused granulation hyperplasia, and prompted a large number of inflammatory cells to infiltrate mucosa. The amount of IL-10-positive staining was decreased (Figure 3C). 6-gingerol (Figure 3D,E) and mesalazine (Figure 3F) treatment gradually repaired the damaged glandular structure, and IL-10-positive staining was increased compared to DSS treatment.

IL-17 level in serum and bowel tissue of each group

IL-10 level in serum and bowel tissue of each group

Activation of NF-κB signaling in each group 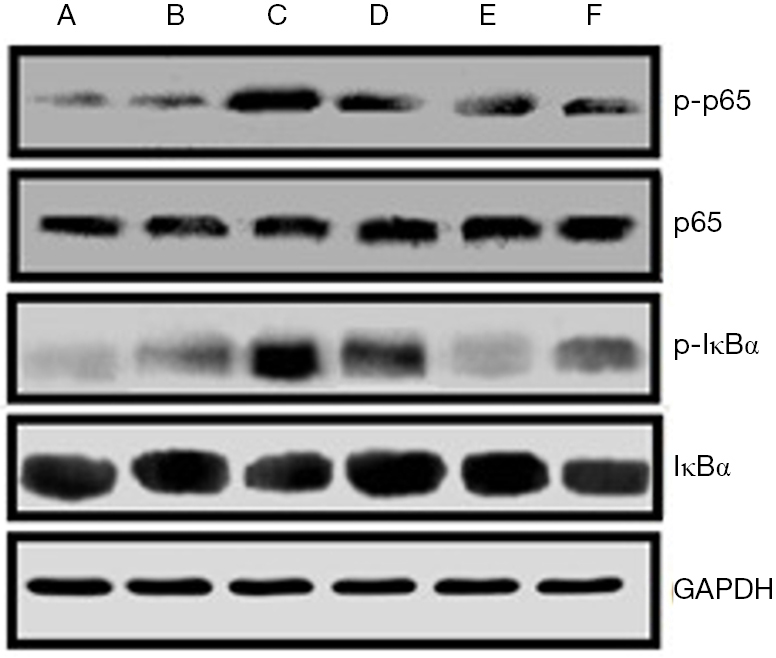 Figure 6 Activation of NF-κB signaling in each group. 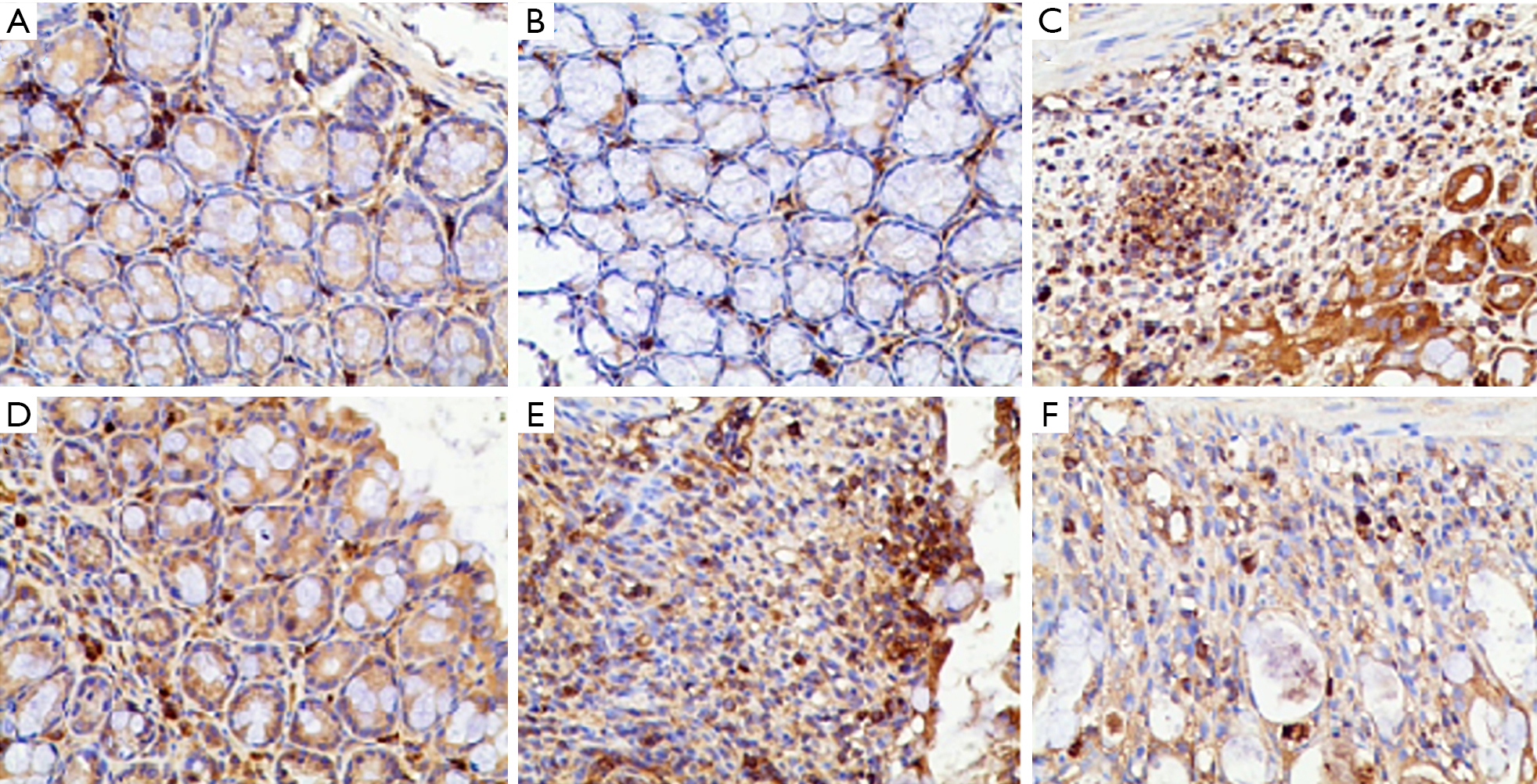 Figure 7 p-IκBα staining in the bowel tissues of each group (200×). 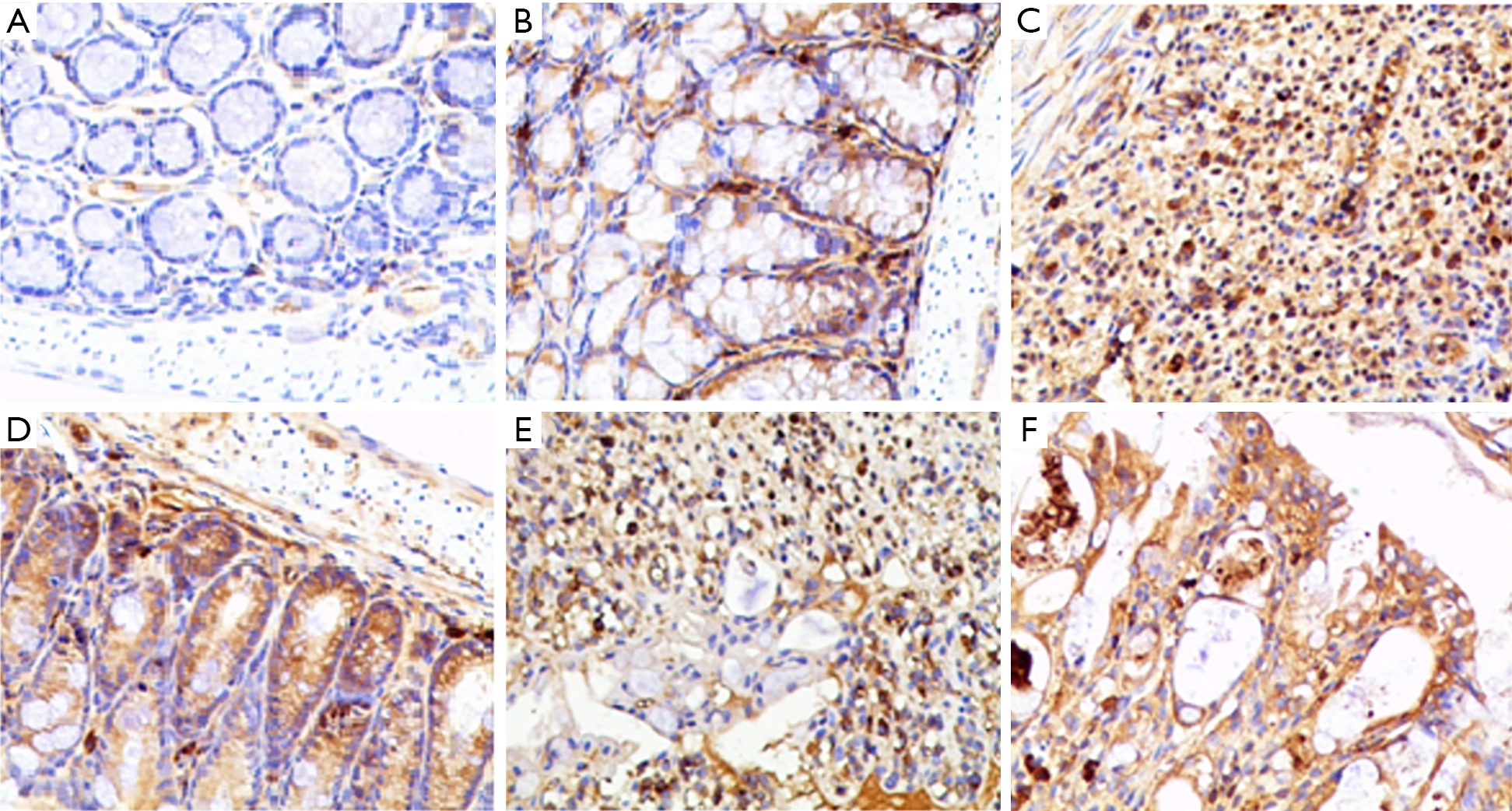 The current therapeutic drugs for UC include mesalazine, glucocorticoids, and immunosuppressants. Despite their high clinical performance, adverse reactions, especially on fertility, limit their wider application. Consequently, novel and safe drugs for the treatment of UC are urgently needed.

Previous research by our team and others has confirmed the role of 6-gingerol in the treatment of UC in mice models by alleviating intestinal inflammatory injury (6,7), but its underlying mechanism is still unknown. In this study, we aimed to explore the potential anti-inflammatory mechanism of 6-gingerol in DSS-induced colitis mice.

UC is an immune-mediated intestinal inflammatory disease, which has a variety of pathogeneses (12) mediated by a variety of immunological factors, including Th17 and Treg. Th17/Treg balance is the key factor to maintain intestinal immune homeostasis (13). IL-17 is a pro-inflammatory cytokine, secreted mainly by Th17. Meanwhile, IL-10, which is secreted mainly by Treg, is an anti-inflammatory cytokine. In the current study, we found that 6-gingerol could significantly alleviate the inflammatory injury in bowels of the mice models by decreasing the IL-17 level and increasing the IL-10 level in serum and bowel tissue. This supports the notion in which the imbalance of Th17/Treg cells contributes to the progress of UC, which is consistent with a previous report (14).

Nuclear factor-κB (NF-κB) is a protein with multi-directional transcription regulation and consists of 5 subgroups: NF-κB1, NF-κB2, p65, c-Rel, and RelB. The active form is a dimer composed of different subgroups, the most important of which is p50/p65 heterodimer formed by p50 and p65 encoded by the NF-κB1 gene and NF-κB2 gene respectively (14). NF-κB is involved in the pathogenesis of many inflammatory diseases. It is reported that NF-κB can upregulate the expression of pro-inflammatory cytokines in intestinal mucosa, aggravate the inflammation of intestinal mucosa, and cause the apoptosis of epithelial cells. In addition, NF-κB can promote Th17 cell differentiation by regulating the expression of the transcription factor RORγT and the inflammatory factors IL-1α, IL-1β, and IL-6 (15-17). Therefore, we further examined NF-κB signaling in each group. We found that DSS increased the phosphorylation levels of IκBα (p-IκBα) and p65 (p-p65), and that the treatment with 6-gingerol could significantly suppress the level of p-IκBα and p-p65 induced by DSS. This indicates that DSS can activate NF-κB signaling pathway, triggering an inflammatory response, while 6-gingerol can suppress inflammatory injury by inhibiting NF-κB signaling pathway.

In a resting state, NF-κB is bound to its inhibitor IκBα as an inactive form in the cytoplasm. When triggered by lipopolysaccharides (LPS) and/or pro-inflammatory factors such as IL-1β and TNF-α, the dimer of NF-κB is dissociated from the complex of IκBα/p50/p65. After this, the activated NF-κB is transferred to the nucleus and binds to the promoter regions of various active genes in the nucleus; this activated NF-κB can regulate a variety of inflammatory factors. We, then further examined the location of p-IκBα and p-p65 in bowel tissue using immunohistochemistry. It was found that, after DSS treatment, p-p65 staining was mainly in the nucleus with some in the cytoplasm, and the treatment with 6-gingerol could significantly weaken the density of p-p65 both in the cytoplasm and nucleus, indicating that 6-gingerol can alleviate the inflammatory response by blocking NF-κB from entering the nucleus.

There were some limitations in this study. Firstly, the small number of animals included might have caused statistical bias. Secondly, the in-depth mechanism behind the above-mentioned observations needs to be further explored, and this will constitute the continued work of our team. In summary, by regulating NF-κB signaling pathway, 6-gingerol is effective in alleviating inflammatory injury in DSS-induced UC mice.

Reporting Checklist: The authors have completed the ARRIVE reporting checklist. Available at http://dx.doi.org/10.21037/apm-20-903

Conflicts of Interest: All authors have completed the ICMJE uniform disclosure form (available at http://dx.doi.org/10.21037/apm-20-903). The authors report grants from Wuxi City Health and Family Planning Commission, grants from High-level Health Talents in Jiangsu Province, during the conduct of the study.

Ethical Statement: The authors are accountable for all aspects of the work in ensuring that questions related to the accuracy or integrity of any part of the work are appropriately investigated and resolved. Animal experiments were approved by The Third People’s Hospital of Wuxi Medical Ethics Committee, and is compliance with the institutional guidelines for the care and use of animals.