The realization of single-domain training prompted the implementation of a 10-year multi-domain cognitive intervention study to investigate the possibility of fortifying multiple cognitive functions in a single session format. This format will benefit elderly Chinese adults as they often display deficits in several cognitive domains and are also unlikely to complete multiple sessions of training (14-16). The multi-domain interventions were formatted to be user friendly.

Catechol-o-methyltransferase (COMT) moderates dopamine through its contribution to catecholamine degradation. The Met and Val variants of the COMT gene lead to a functional polymorphism. The rs4680 variant (Val158Met) exhibits decreased enzymatic activity, leading to an increase in dopamine levels in the post-synaptic neuron which are considered to increase the capacity to process information (17). On the other hand, the Met variant produces an enzyme with increased activity which leads to lower dopamine levels. Previous studies suggest that the Val COMT allele may be associated with a reduction in executive functioning in healthy subjects (18-21), schizophrenic and bipolar affective disorders.

Our previously studies reported multi-domain cognitive training reduces declines in processing speed over time. APOEε4 is associated with reductions in executive function over time, and training may attenuate ε4-associated declines in processing speed. APOEε2 carriers may also benefit from training, particularly on measures of executive function and verbal memory (22). So our underlying hypothesis, was that the effect of the intervention would also differ based on COMT variant—with Val carriers showing worse cognitive outcomes and Met carriers showing better cognitive outcomes—and training effects would last for 12-month in Met carriers (22).

A total of 151 participants were recruited and screened from two neighborhoods of the Putuo District in Shanghai in 2006. Inclusion criteria were as follows: (I) at least 70 years old; (II) an ability of self-care without any physical disability or any severe physical disease; (III) no psychiatric disorders or dementia; (IV) an ability to read, write, see, and hear; (V) activities of daily living score is 19 or below; (VI) the Chinese version of the Mini-Mental State Examination score is 19 or more.

The 151 elderly individuals were divided into two groups: 90 in the intervention group and 61 in the control group. Their age ranged from 70 to 89 years old with a mean age of 74.8 [standard deviation (SD) 3.7] years old. All participants were assessed by physical and neuropsychological tests at baseline, 3 months (immediately after intervention), 9 and 15 months after enrollment. There were 147 individuals (88 in the intervention and 59 controls) agreed to have blood drawn for DNA extraction and genotyping at baseline. This study was approved by the Ethics Committee of Tongji Hospital of Tongji University [LL(H)-09-04] and all participants provided informed consent. The study was conducted in accordance with the Declaration of Helsinki (as revised in 2013). Details of the recruitment and the protocols have been published elsewhere (23).

The nonsynonymous variant rs4680 (Val158Met) was chosen for genotyping. Genotyping of single nucleotide polymorphisms (SNPs) was performed by the TaqMan allelic discrimination assay. The Primer Express program (Applied Biosystems) was used to design the PCR primers and the TaqMan probes. All probes were designed by the Applied Biosystems service. The standard 5 µL PCR reaction was carried out using TaqMan® Universal PCR Master Mix reagent kits under the guidelines provided, containing: 10ng DNA template, 2× TaqMan PCR MasterMix 2.5 µL, and 20× SNP assay (including primer and FAM /VIC probes) 0.25 µL. The program is: initial denaturation at 95 °C for 1 min, followed by 40 cycles of denaturation at 92 °C for 15 s, annealing at 60 °C for 60 s. Real-time PCR was performed on an ABI Prism 7900-HT instrument with the Sequence Detection System (SDS 2.0) and the SDS Enterprise Database (Applied Biosystems).

Epidata 3.0 software was used for data entry and SPSS 17.0 software was used for preliminary data analyses. Descriptive statistics were performed using chi-squared test (categorical data), one sample t-test, paired t-test and analysis of covariance (continuous variables) depending on the type of data. Intention-to-treat analysis was used to estimate the intervention effect. Participants who participated in at least one training session and had follow-up data were included in the analysis, regardless of whether or not they completed the entire 24 sessions. Cognitive data was summarized into equation 1 (Factor 1), equation 2 (Factor 2), and equation 3 (Factor 3). The different time points of the cognitive tests are indicated by the suffix: “base” for baseline, “a” for 3 months, “b” for 9 months, and “c” for 15 months. Equation 1 data was a measurement of verbal memory, with primary loading from auditory verbal learning test. Equation 2 data was a measurement for processing speed, primary loadings from cancellation test completion time. Tasks related to set shifting were used to gather data for equation 3, which represented executive function.

COMT SNPs were assessed for correct Hardy-Weinberg equilibrium as a quality control measure. For analysis, genotypes were recoded from “Allele 1, Both, Allele 2” to a numeric value representing the dose of minor (Allele 1, A) allele (coded as 0, 1 or 2) using Stata10/MP. All COMT analyses were conducted in RStudio Version 1.0.136. Preliminary linear model analysis used the function: lm (formula = t ~ age + gender + education + COMT_dose) to investigate COMT genotype effect on cognitive score. Early results revealed data from each cognitive test to be strongly associated with certain demographic variables: equation 1 has a really strong association with education, age is a strong predictor for equation 2, and gender is a strong predictor for equation 3. The observed pattern makes sense as education can influence verbal memory, age is associated with decline in processing speed, and there are studies illustrating the gender related patterns in set shifting. However, these confound variables can prevent the accurate detection of COMT genotype or intervention effect on cognitive score. Thus, age, gender, and education were included as covariates in ‘adjusted’ analysis.

Demographic and genotype distributions in intervention and control groups

There were no significant differences in demographic characteristics by intervention or rs4680 (Val158Met) carrier status for either allele group (P>0.05, Table 1).

Of the 147 individuals analyzed over the course of 15 months, only 107 people had complete cognitive data for all time points. 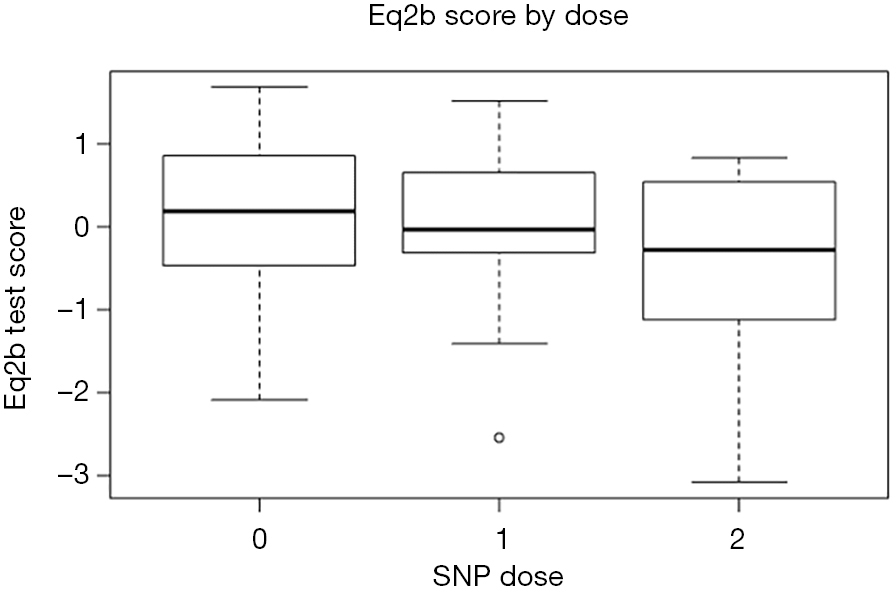 To our knowledge, this is the first study to explore the interaction between COMT SNP rs4680 (Val158Met) and cognitive function as well as the intervention’s effect on cognition over time in Chinese community-dwelling elderly individuals. Through this study, we hope to evaluate if the catechol-O-methyltransferase-Val158Met-polymorphism, which is well known to affect prefrontal dopaminergic metabolism, affects both cognitive function and intervention’s effect on cognition over time. Although previous studies have shown training-associated improvements on reasoning, memory and processing speed over one year post-intervention in healthy older adults (11,27), the interaction of these results with COMT Val158Met polymorphism has not yet been thoroughly explored.

In this study, COMT SNP rs4680 (Val158Met) does not appear to affect cognitive function over time in this cohort of individuals, nor does it interact to affect the intervention’s effect on cognition over time. We also evaluated different domains of cognition: memory, processing speed, and executive function so that we could identify which of these cognitive domains are the most sensitive markers of training effects.

There are weak associations between rs4680 and processing speed at the 3-month time point (beta = −0.28±0.13, P=0.03) and at the 9-month time point (beta = −0.31±0.14, P=0.02), but not at the 15-month time point (P=0.15). We think there are two possible reasons to explain this phenomenon. For the first one, our previous study showed that that processing speed is more dependent on white matter integrity—which shows non-linear declines that plateau in middle-age exhibit additional decline later in life (22). We can’t come to the conclusion only through this study that if the intervention’s effect on processing speed is also non-linear changed, but further studies to reveal the specific intervening process of the intervention seems beneficial. Second, these may be false-positives as they do not appear to be consistent effects seen over time. However, it remains to be explored why false positive results appear at both the 3-month time point and the 9-month time point.

COMT vel158met is a point mutation of the fourth exon on its gene, which leads to the activity of its product COMT reduced 3–4 times through turn the amino acid from valine (Val) into methionine (Met). For Met allele carriers, their prefrontal enzyme activity has changed, thus affects prefrontal executive function (28). An earlier study on children has shown that the effects of COMT gene polymorphism on cortical language processing may become different in a narrow age window of 6–10 years (29). In our study, subjects are 70 years of age and older, COMT SNP rs4680 (Val158Met) does not appear to affect cognitive function over time in this cohort of individuals, nor does it interact to affect the intervention’s effect on cognition over time. Evidence above shows that there may be a narrow age window in which cognitive function changes in older individual, and our cohort could have missed this age.

There was no effect on rs4680 on any other measure of cognitive function at any other time point except processing speed. Our previous findings suggest that processing speed may be the most sensitive target for multi-domain cognitive training. Memory and executive function are less sensitive to training interventions because they depend more on cortical gray matter regions - which show linear rates of atrophy over time—while processing speed is more tractable to training as it is more dependent on white matter integrity—which shows non-linear declines that plateau in middle-age then show additional decline later in life (22,30).

Some previous researches have shown that there is a gender difference in the activity of COMT (31,32). During transcription, the estrogen could regulate the COMT expression through the estrogen receptor in its promoter region (33). And the estrogen-mediated reduction in COMT mRNA was declared to be accompanied by a decrease in COMT activity (34). In general, women have 20–30% lower COMT activity than men (35). Additionally, evidence showed that there may be higher estrogen level in the prefrontal cortex than any other cortical area. Therefore, whether sexual difference is the impact factor of our result still need a larger sample size to authenticate.

As the first report of the interactions between COMT Val158Met polymorphism and the cognitive training in a Chinese cohort, we expect this research provides useful information to other groups designing cognitive intervention studies or with access to larger cohorts thus they can further examine these conclusions and estimate them in an independent elderly population.

Although our findings suggest age related COMT gene polymorphisms affect cognitive function, the narrow age range of the cohort limits the strength. Future studies should focus on individuals encompassing a winder age range in order to reveal a more comprehensive understanding of age-related cognitive patterns in relation to COMT gene. Second, this time we evaluated a single COMT SNP (rs4680: Val158Met). All of COMT genes, the Val158Met is a genetic variant which was thought to be closely related to language ability, perception, and processing. Meanwhile, there is other important gene-locus, as rs4818, which is was found to moderate immediate memory transfer effects following single-domain training only, with G/– carriers displaying greater benefits than C/C carriers (36). Our previous research also involved a gene—ApoE, non-carriers had good response to cognitive intervention (22). In following studies, assessing the effects of multiple gene polymorphism would be beneficial.

Conflicts of Interest: All authors have completed the ICMJE uniform disclosure form (available at http://dx.doi.org/10.21037/apm-19-416). The authors have no conflicts of interest to declare.

Ethical Statement: The authors are accountable for all aspects of the work in ensuring that questions related to the accuracy or integrity of any part of the work are appropriately investigated and resolved. The study was conducted in accordance with the Declaration of Helsinki (as revised in 2013). This study was approved by the Ethics Committee of Tongji Hospital of Tongji University [LL(H)-09-04] and all participants provided informed consent.