The efficacy of ischemic conditioning in the prevention of gastroesophageal anastomotic complications: a meta-analysis

Esophageal cancer is the 6th leading cause of cancer-related deaths worldwide (1). Regardless of the development of surgical technique and perioperative management, the incidence of anastomotic leakage (AL) remains high (2,3). The blood supply to the gastric conduit is thought to be the most crucial factor affecting the healing of the anastomosis (4,5). The right gastroepiploic artery becomes the primary supplier of the conduit after esophagectomy (6). So the blood supply to the proximal end (near the gastric fundus) of the conduit, which is far away from the primary trunk of the right gastroepiploic artery, is weaker than other parts. And the condition would be even worse in patients who undergo cervical anastomosis for a higher anastomotic level. A meta-analysis shows that cervical anastomosis has a significantly higher risk of AL than intrathoracic anastomosis (7).

The evidence above makes us believe the improvement of the blood supply to the anastomotic site is the key to decreasing the incidence of AL. The simplest way to improve the blood supply is by bringing down the anastomotic level. However, it is not feasible in the upper esophageal tumors for the concern of a positive surgical margin (8). Some hospitals have started using fluorescence imaging to guide the selection of the anastomotic site (9,10). However, the technique is unable to deal with a globally poor perfusion conduit. The anastomotic site has to be placed in the proximal end of the conduit to achieve a tension-free anastomosis in some cases (11). The ischemic conditioning (IC) of the stomach was proposed over 20 years ago. By ligation or embolization of the gastric vessels, it promotes hypertrophy and neovascularization of the remaining arteries helping the stomach adapt to the decline of blood supply before esophagectomy (12). Pham and his colleagues observed IC produced a 67% increase of microvessels counts, compared to the controls (12). The animal model conducted by Perry et al. also showed IC could significantly increase neovascularization (13). What’s more, they found the degree of inflammation at the healing anastomosis decreased dominantly. These findings indicate IC could provide a better environment supporting the healing of gastroesophageal anastomosis. The meta-analysis conducted by Heger et al. shows the incidence of AL is 9.6% and 11.5% for patients undergo IC, and those do not, respectively (14). The difference doesn’t reach a statistical significance. However, the studies they included were published before the year of 2012. Several new studies on this topic have been published in the past few years. So we conduct this meta-analysis to update the evidence on this topic.

This study was carried out according to the Cochrane handbook for systemic reviews of intervention, and the results were reported following the Preferred Reporting Items for Systemic Reviews and Meta-Analyses (PRISMA) reporting checklist. Available at http://dx.doi.org/10.21037/apm-19-569.

Inclusion criteria: (I) studies enrolled patients undergoing esophagectomy with gastroesophageal anastomosis; (II) studies compared the outcomes between the patients who received IC, and those did not.

The first-round screening was done by reading the titles and abstracts of the studies. Most irrelevant studies were excluded in this step. Then, the second-round screening was performed by reading the full texts of the potentially relevant studies. After that, we started to extract relevant data to finally confirm the studies which could be included in the meta-analysis. The following baseline characteristics data of the studies were collected: Name of the first author, publication year, participants, sample size, ischemic conditioning strategy, and anastomosis technique. The incidence of anastomotic complications was used to evaluate the efficacy of ischemic conditioning.

All the work above was accomplished by two authors (Zhuo and Shen) independently and then checked with each other. Disagreements were resolved by discussing it with another author (Lin).

The Methodological Index for Non-Randomized Studies (MINORS) (15), which contained eight items, was used to assess the quality of included studies.

The Review Manager Version 5.3 and STATA Version 12.0 software (Stata Corporation, College Station, TX, USA) were used to run the data analysis. The Odds Ratio (OR) was used in the comparison of dichotomous data. The I2 was used as the indicator of heterogeneity. I2 <25%, 25%≤ I2 <50% and I2 ≥50% indicated low, moderate and high heterogeneity. When high heterogeneity was detected, subgroup analysis and meta-regression analysis would be performed to explore the source of heterogeneity. Begg’s and Egger’s tests were used to detect publication bias. A P value of less than 0.05 was considered to be statistically significant.

The online database searching identified a total of 5,302 potentially relevant studies. The screening of the included studies was shown in Figure 1. Firstly, two thousand and four duplicated studies were removed. By reading the titles and abstracts, 1,575 unfavorable publication types (reviews, case reports, conference abstracts, meta-analyses, study protocols, replies, and comments), 65 animal or in vitro studies were excluded. Another 1,216 studies which didn’t focus on the targeted disease and intervention were excluded as well. Then, 32 potentially relevant studies were carefully checked by reading the full texts. Nineteen of them met the requirements of our study and entered the data extraction step. After the removal of 5 studies with duplicated patients, 14 studies enrolling 1,705 patients were finally included in the meta-analysis. 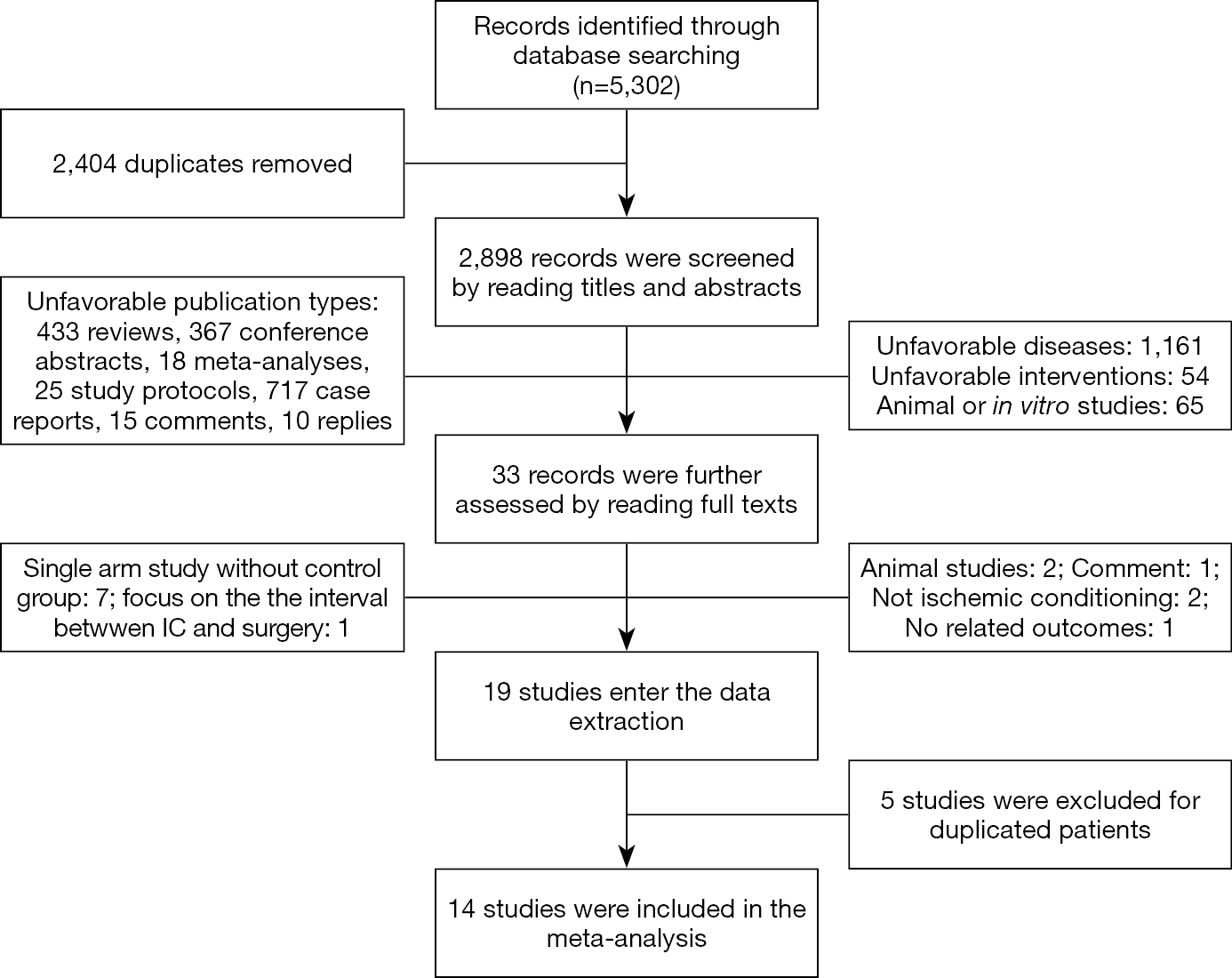 The baseline characteristics of the included studies were shown in Table 1. Four studies (16-19) achieved the IC by embolism of the gastric vessels, while the left ten studies (5,12,20-27) were through the laparoscopic approach. The interval between the IC and esophagectomy varied considerably among the 14 studies ranging from 3 to 205 days. Eleven studies showed the ischemic conditioning (IC) group had a lower incidence of anastomotic leakage (AL) than the no ischemic conditioning (NIC) group, while three studies showed the IC group had a higher rate of AL. 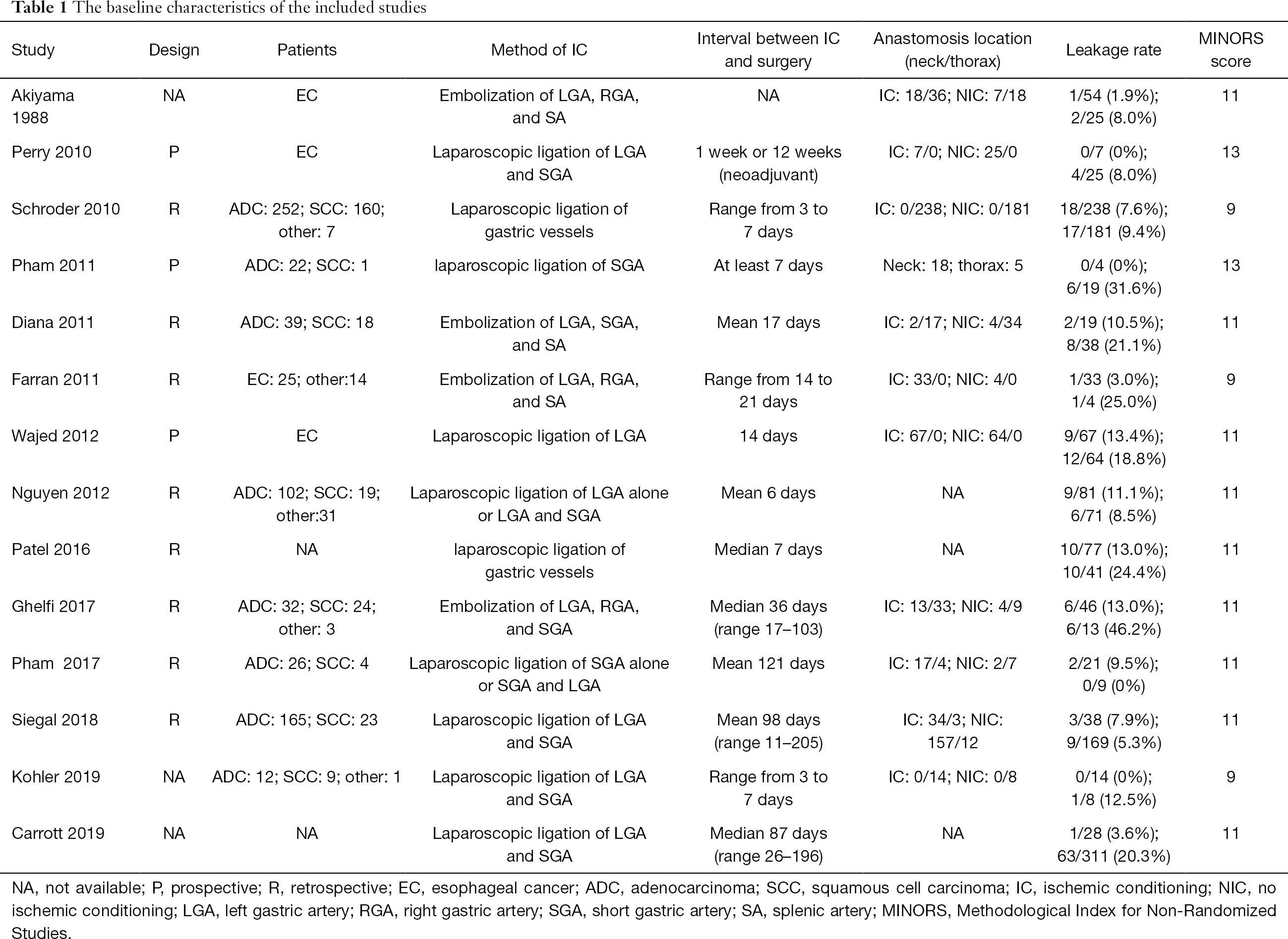 Table 1 The baseline characteristics of the included studies
Full table

The data of anastomotic leakage (AL) was available in all 14 studies. The pooled analysis showed the incidence of AL was 8.5% and 14.8% for the IC group and NIC group, respectively. The difference reached statistically significant (OR =0.57, 95% CI: 0.40–0.82, P value =0.002, Figure 2). What’s more, both of the embolization and laparoscopic ligation approach were efficacy in the reduction of AL (Figure 2). A subgroup analysis was performed according to the interval between IC and gastroesophageal anastomosis. It showed the IC was effective in the reduction of AL when the interval above 2 weeks (P value =0.002, Figure 3). The incidence of AL was comparable between the IC and NIC group in the one-week subgroup (7.1% vs. 9.5%, P value =0.36, Figure 3). 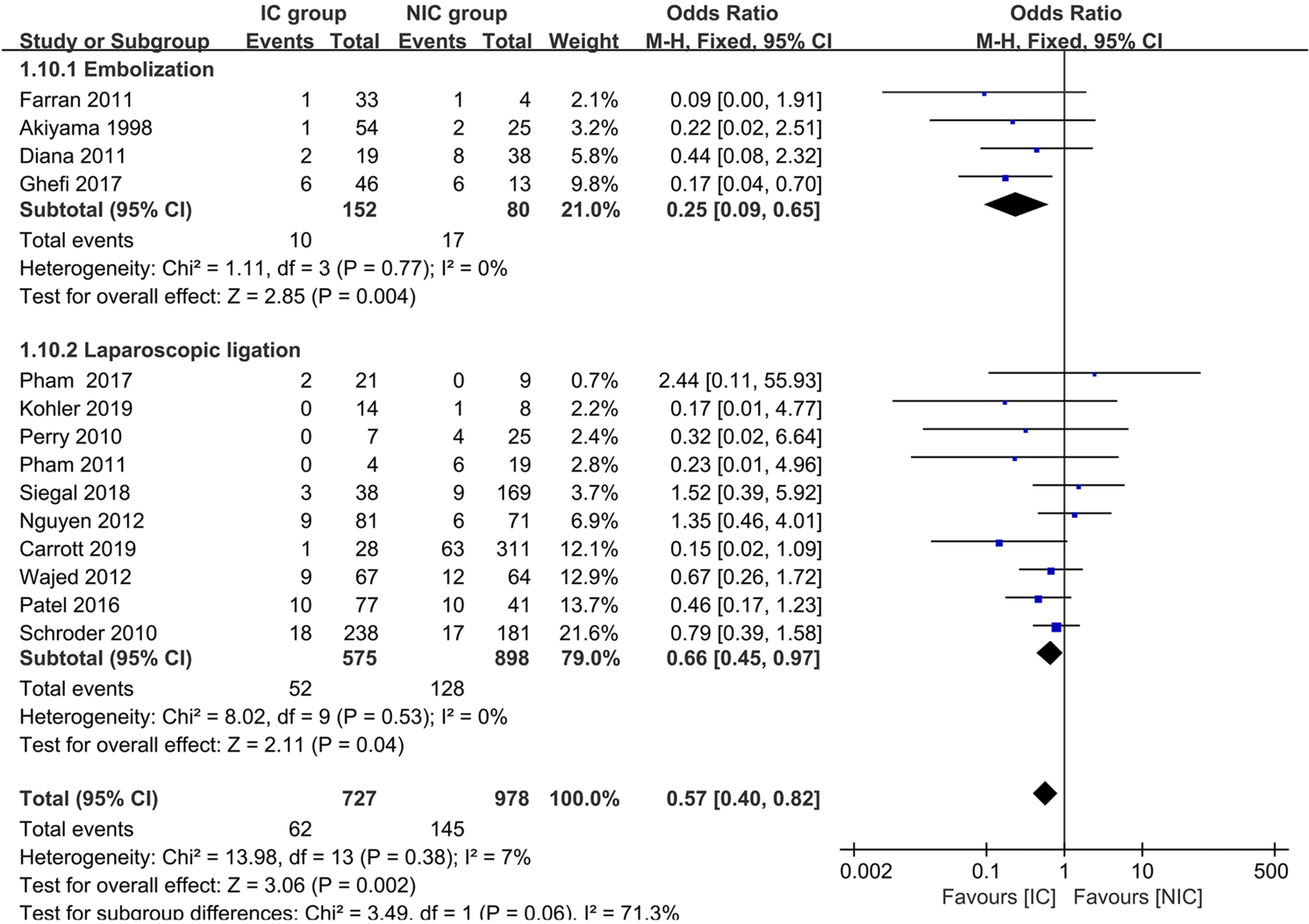 Figure 2 Comparison of anastomotic leakage (AL) rate between ischemic conditioning (IC) group and no ischemic conditioning (NIC) group. The IC group had a lower rate of AL than the NIC group (8.5% vs. 14.8%). The difference reached statistically significant (OR =0.57, 95% CI: 0.40–0.82, P value=0.002). Both the embolization and laparoscopic ligation approach were efficacy in the reduction of AL. 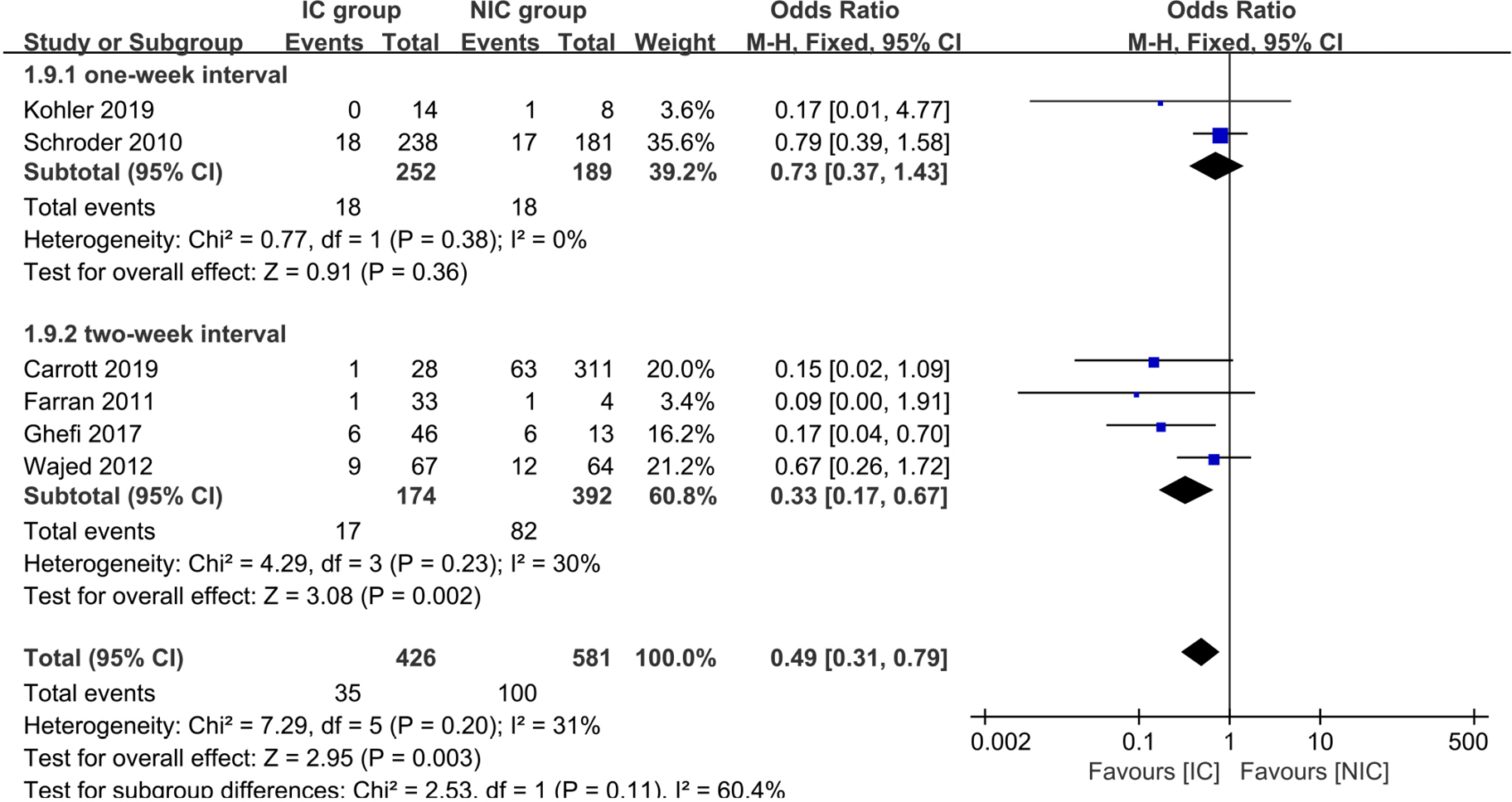 All the analyses above showed low or moderate heterogeneity. The Begg’s (P value =0.913, Figure 6A) and Egger’s test (P value =0.544, Figure 6B) showed no publication bias. 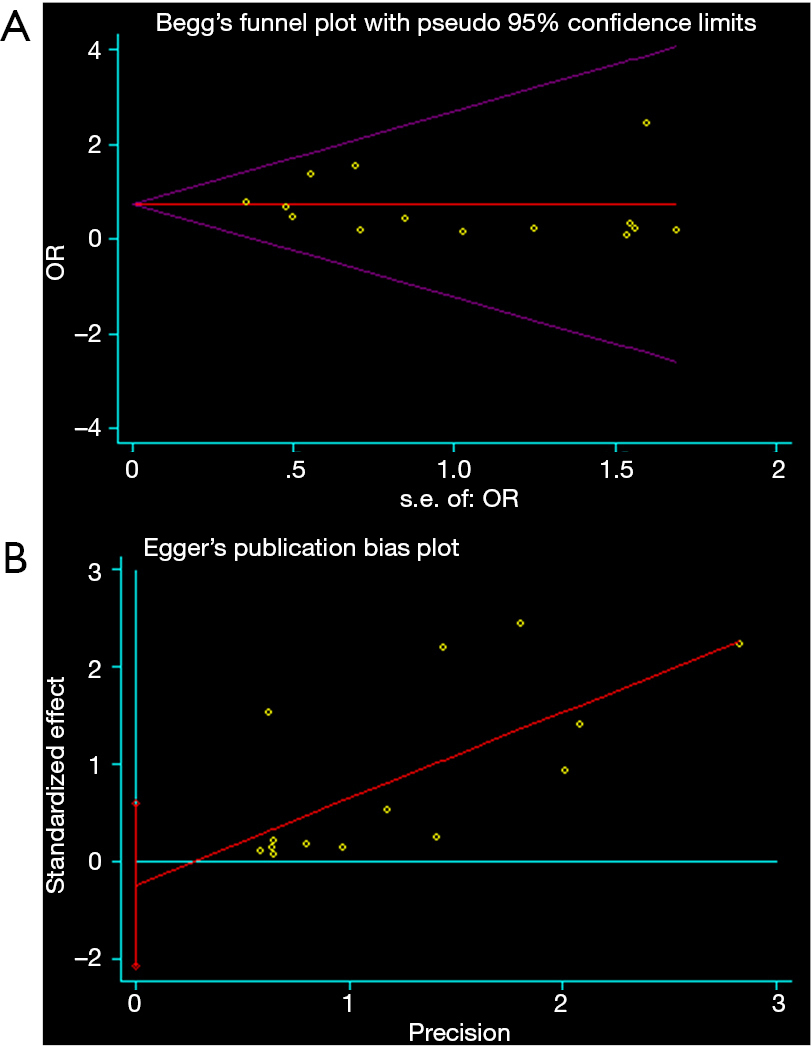 Anastomotic leakage (AL) and anastomotic stenosis (AS) are the two mainly anastomosis-related complications. The latter often happens a long time after the surgery, and it is much less dangerous. The AS is handled by endoscopic dilation mostly. As for AL, it often happened within a short time after the surgery. It is an unpredictable and lethal complication. The early reorganization of high-risk patients, well preoperative communication, early postoperative detection, and timely treatment are the rules for the management of AL. The good drainage and adequate nutrient supply are the major weapons to deal with the AL, and most patients could recover in a few weeks. However, about 5–10% of patients who suffer from AL would die (28). So the prevention of AL is quite important.

The previously published meta-analysis showed patients who underwent IC had a lower incidence of anastomotic complications than those who did not (14). However, the difference didn’t reach a statistical significance. After the inclusion of newly published studies, our study proved the efficacy of the ischemic conditioning (IC) in the reduction of anastomotic complications for the first time. The IC significantly decreased the incidence of anastomotic leakage, and it also reduced the happen of postoperative stricture.

The embolization or ligation of the gastric vessels may promote the hypertrophy and neovascularization of the preserved gastric vessels (6,30). The compensation helps the stomach adapt to the decline of the blood supply gradually. It is how the ischemic conditioning works. The animal experiments conducted by Perry et al. showed the 7-day ischemic conditioning didn’t produce increased neovascularity while the 30-day conditioning increased the microvessel counts significantly (13). So, the interval between the IC and esophagectomy is an essential factor affecting the efficacy of the IC. However, the optimal interval remains questionable, and it varies significantly among different studies (6,23,31). The subgroup analysis, according to the interval between IC and anastomosis, showed the incidence of AL was comparable between the IC group and the NIC group in the 1-week subgroup. When it came to the 2-week subgroup, the IC group had a statistically significant lower rate of AL than the NIC group. Therefore, the interval between IC and surgery should be enough to let the compensations happen. The results of our analysis recommended the interval should be over 2 weeks.

The anastomotic stricture is a complication that dramatically decreases the quality of life of the patients (32,33). The stricture rate could be as high as 18–42% after the gastroesophageal anastomosis (32). Siegal et al. reported the IC could significantly decrease the incidence of anastomotic stricture fourfold (5). The studies conducted by Carrott et al. and Patel et al. also supported the result (25,27). Our meta-analysis showed the overall incidence of anastomotic stricture dropped to 12.1%, which otherwise would be as high as 27.9%. The animal experiment showed the IC could increase muscularis propria preservation and decreased collagen deposition at the healing anastomosis (13). So the low stricture rate in the IC group may associate with the reduced fibrosis of the anastomotic site.

The IC is a traumatic procedure. So it also has some side effects. The side effect of the laparoscopic approach is similar to general laparoscopic gastric surgery such as wound infection, bleeding, hiatal hernia, and so on (24). As for the embolization approach, it is more complicated. The reported side effect includes partial splenic infarct, vesicular ischemia, gastric perforation, and pancreatitis, and so on (18). Thankfully, the morbidity rate is quite low, and most of them are mild.

In summary, our study proved the ischemic conditioning is a safe intervention that could reduce the anastomotic complications effectively. It could play a role in the prevention of anastomotic leakage among high-risk patients. However, the studies included in the meta-analysis were cohort or case-control study. It brought down the evidence level of our findings. Future randomized controlled clinical trials are needed to provide high-level evidence on this topic.

We would like to thank Mr. Shi-De Wu from the High School Attached to Northeast Normal University for his linguistic assistance to this manuscript.

Reporting Checklist: The authors have completed the PRISMA reporting checklist. Available at http://dx.doi.org/10.21037/apm-19-569

Conflicts of Interest: All authors have completed the ICMJE uniform disclosure form (available at http://dx.doi.org/10.21037/apm-19-569). The authors have no conflicts of interest to declare.

Ethical Statement: The authors are accountable for all aspects of the work in ensuring that questions related to the accuracy or integrity of any part of the work are appropriately investigated and resolved. This is a meta-analysis. It does not involve any ethical or informed consent problems. This article does not contain any studies with human participants performed by any of the authors.