A 48-year-old woman underwent cervical percutaneous epidural neuroplasty (PEN) at a local medical center because of a 1-year history of neck pain. When the guide needle (puncture needle) was inserted during the PEN procedure, she experienced an electric shock-like sensation throughout her right upper and lower extremities. Subsequently, the patient developed motor weakness and experienced lancinating pain in her right upper and lower extremities. She could walk independently, but her gait pattern was characterized by a wide base of support. One month after undergoing PEN, she was admitted to our hospital. She showed mild weakness in her right upper and lower extremities with a manual muscle test score of 4. Furthermore, the Romberg sign test was positive, indicating impaired proprioception. The degree of pain was 3 on the numeric rating scale in her right upper and lower extremities. Cervical magnetic resonance imaging (MRI) performed 1 day before the PEN revealed no significant findings, except for diffuse bulging of the C3–4, C4–5, and C6–7 discs (Figure 1). However, an MRI performed 1 month after the PEN showed a high T2 signal on the right side of the posterior spinal cord at the C5–6 disc level (Figure 1). Fluoroscopic images obtained during the PEN showed that the guide needle was inserted into the epidural space through the C5–6 interspinous area. Based on the patient’s history and physical examination and MRI results, she was diagnosed with a cervical spinal cord injury (SCI) due to direct damage that occurred during the PEN. 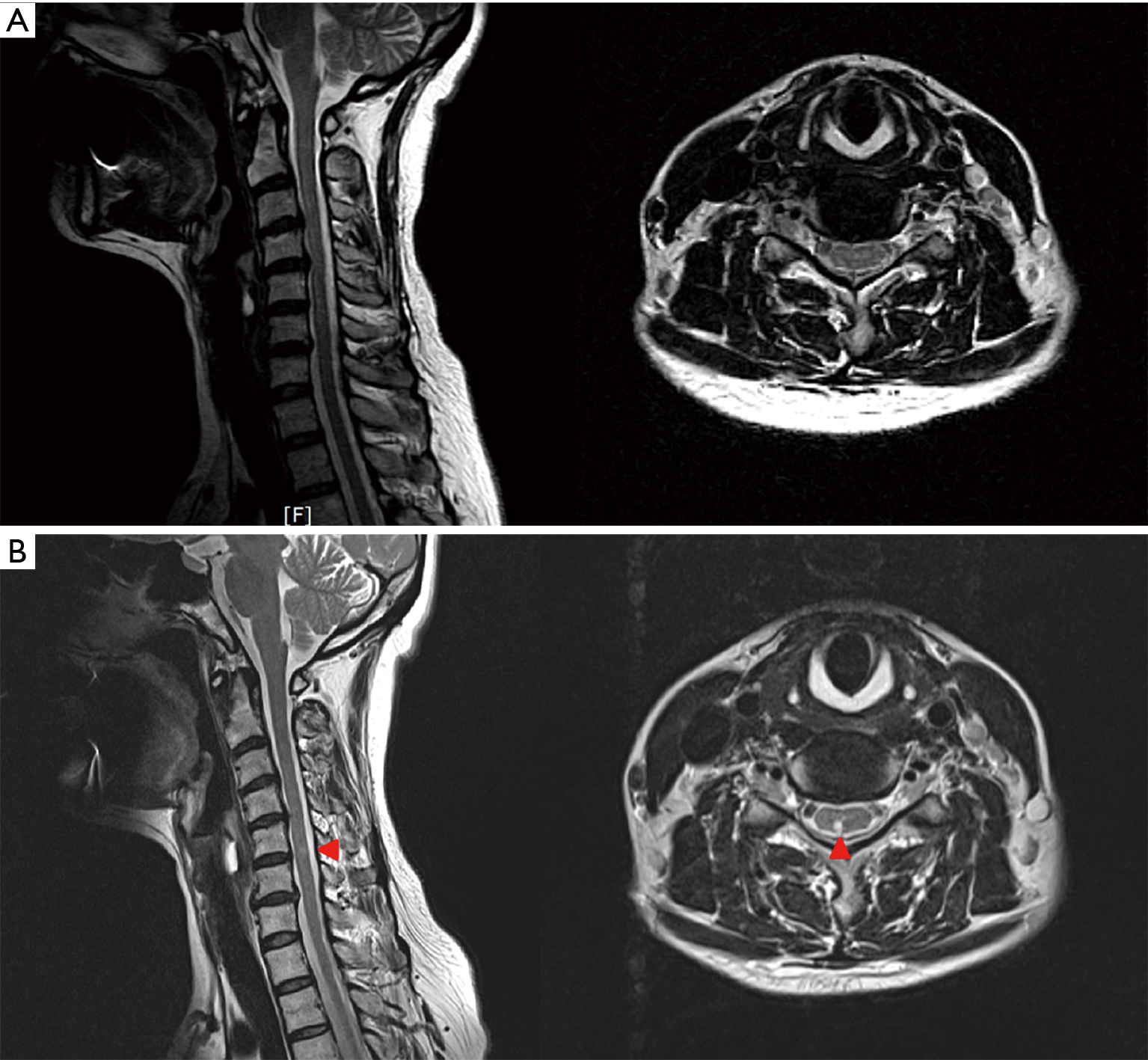 Figure 1 (A) Sagittal and axial (C5–6 disc level) T2-weighted cervical spine magnetic resonance imaging (MRI) obtained 1 day before the cervical percutaneous epidural neuroplasty (PEN). No signal changes can be observed. (B) MRI performed 1 month after the PEN showing a high T2 signal (red arrowheads) on the right side of the posterior spinal cord at the C5–6 disc level.

Cervical PEN is used for controlling neck and upper extremity pain due to bulging of the cervical disc, with or without cervical radiculopathy, following disc herniation or spinal stenosis, epidural fibrosis, and failed neck surgery syndrome (1). Cervical PEN is performed using the following process: a patient is placed in the prone position on a fluoroscopic table, an 18-gauge guide needle is inserted into the cervical interspinous area, and the needle tip is advanced to the cervical epidural space using the loss of resistance technique. With the help of fluoroscopy, the radio-opaque flexible epidural catheter or Racz catheter is placed at the target location in the epidural space through the inserted guide needle. After confirming the proper positioning of the catheter tip with a contrast media injection, hyaluronidase, saline, a local anesthetic, and a steroid are administered. In the abovementioned case, the guide needle was inserted too deeply past the epidural space, causing direct damage to the cervical spinal cord.

PEN has been shown to be more effective than cervical epidural steroid injection because it results in a more localized selective block of the lesion causing pain (1). Additionally, with PEN, adhesion around the inflamed nerve can be removed by mechanical (catheter indwelling), chemical (hyaluronidase), or hydrostatic (contrast media and saline) adhesiolysis (1). Several complications, including bleeding in the epidural space, penetration of the dura, catheter shearing, hypotension, and infection, have been reported following PEN (2). However, SCI has not been previously reported. Therefore, to the best of our knowledge, this study is the first to report iatrogenic SCI following PEN. Clinicians should be aware of the possibility of iatrogenic SCI when performing cervical PEN and should carefully insert the guide needle because the cervical epidural space is narrow, with a 1–3-mm diameter (3). In addition, clinicians should be aware that the ligamentum flavum is frequently not fused at the midline. Therefore, the loss of resistance technique cannot be entirely reliable when inserting a guide needle (4). Moreover, clinicians should be aware that they might miss the loss of resistance because the ligamentum flavum is thinner at the cervical spine than at the lumbar spine.

Funding: The present study was supported by a National Research Foundation of Korea grant funded by the Korean government (Grain No. NRF-2019R1F1A1061348).

Conflicts of Interest: All authors have completed the ICMJE uniform disclosure form (available at http://dx.doi.org/10.21037/apm-20-215). The authors have no conflicts of interest to declare.