Newborn congenital diaphragmatic hernia (CDH), a developmental closed defect usually involving discontinuity in the septum, sees the protrusion of abdominal viscera into the thoracic cavity, which stunts normal lung development. CDH can cause peripheral bronchioles and alveolar and pulmonary vascular dysplasia, and is associated with severe pulmonary dysplasia and pulmonary hypertension. It can ultimately result in severe respiratory failure shortly after birth (1,2). Despite the progress that has been achieved in diagnosing and treating CHD in recent years, with its unknown etiology and pathogenesis, and with few studies involving CDH patients, the condition is still clinically challenging. Although CHD can be corrected with surgery, postoperative care is critical. Postoperative newborn respiratory disorders are one of the main causes of newborn mortality (3-5), and so the use of a ventilator to supply mechanical ventilation after surgery is vital.

In the current study, we summarize the nursing situation of 30 CDH newborns in our hospital, and examine the effect of postural placement in mechanical ventilation after surgery.

We present the following article in accordance with the STROBE reporting checklist (available at http://dx.doi.org/10.21037/apm-20-1003).

A total of 30 CHD children who received treatment in our hospital between June, 2018 and October, 2019 were included. The children were divided into the preterm infant group and the full-term infant group according to their term status, with 15 cases in each group. Informed and signed consent was obtained from the parents of each child. This study was approved by the ethics committee of Huai’an Maternity and Child Health Care Center (ethics approval number 2018012). The study was conducted in accordance with the Declaration of Helsinki (as revised in 2013).

After surgery, each child was immediately transferred to the newborn intensive care unit (NICU) ward and was nursed by the hospital’s NCIU special care group. Each group was headed by a head nurse and three responsible nurses, and each member of nursing staff had been trained by hospital-appointed nursing experts. During the nursing process, close attention was paid to the changes in the children’s vital signs, and all nursing procedures were carried out under strictly aseptic conditions. The nursing team members conducted medical knowledge training for the parents of the children and were responsible for timely communication.

Before each child was connected to the mechanical ventilator, their nose and pharynx were cleaned of secretions, and they were placed in the supine position with slightly elevated shoulders and the head low. During mechanical ventilation, endotracheal intubation was kept in place to prevent tube detachment or accidental extubation. The airway was kept moist, sputum aspiration nursing was carried out when necessary, and reasonable nasal feeding was provided.

All data were processed by using statistical analysis software SPSS21.0. Quantitative variables were represented by mean s standard deviation, and pairwise comparisons were performed with independent sample t-tests. The qualitative variables were described as percentages, and comparisons between groups were made using the chi-square test. P<0.05 was considered to represent a statistically significant difference. 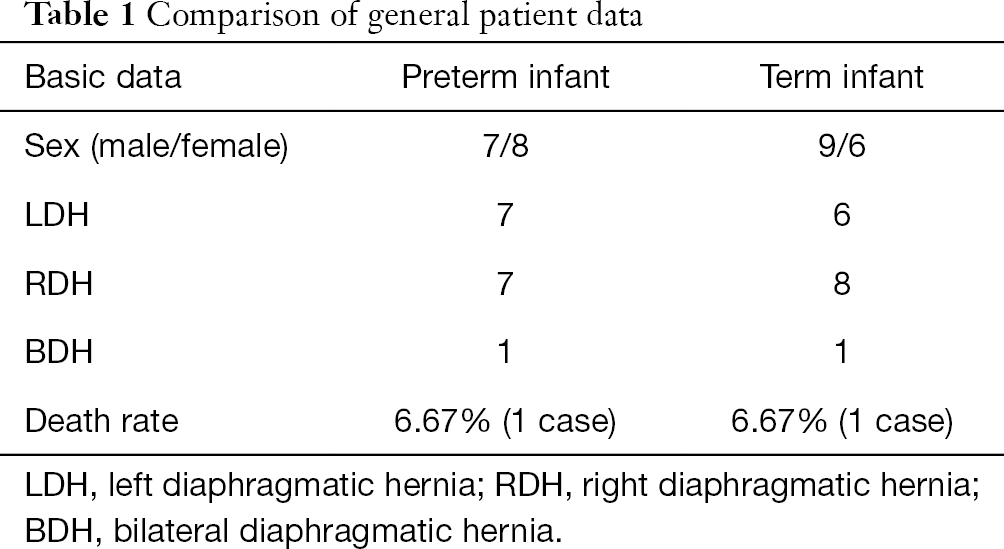 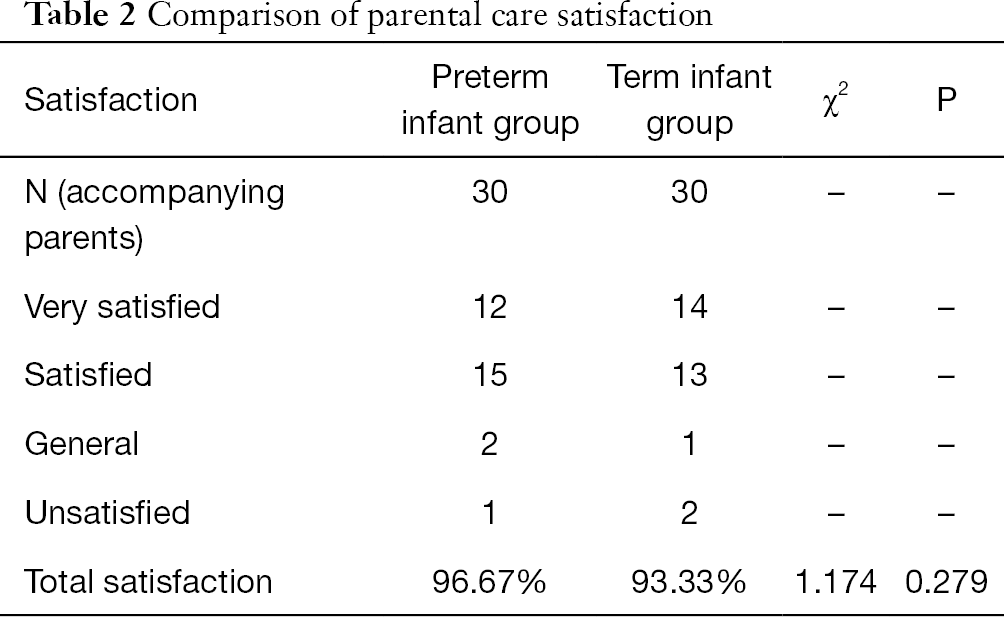 Effects of different postures on oxygenation index of preterm infants

CDH is one of the critical and severe cases affecting newborns, which often involves the abnormal location of adjacent organs and is also associated with severe pulmonary dysplasia and pulmonary hypertension (1,2,4,5). Abnormal development of the lung also leads to abnormal surfactant system function in late pregnancy and after birth (1). CDH can be diagnosed by prenatal ultrasound or soon after birth, when clinical symptoms occur. Approximately 60% of prenatal CDH cases can be diagnosed by ultrasound (1), and in the majority of cases, CDH can be cured by surgery. However, because of the physiological characteristics of hypoplasia in each of the body’s systems, the success and survival rates of the operation highly depend on postoperative nursing. This study summarized and discussed the postoperative nursing status of 30 CDH newborns in our hospital, and analyzed the oxygenation indexes of preterm and full-term CDH newborns placed in different body positions after surgery, with the aim to establishing the influence of position placement on postoperative mechanical ventilation of newborns.

In this study, we divided the children into the preterm and full-term groups according to their term status, and analyzed the oxygenation index of the two groups in the different positions. Two children died of respiratory failure: one in the preterm infant group and one in the full-term group. The rest of the children were stable after operation, and the operation had a success rate of 93.33%. Furthermore, parent satisfaction with the nursing in both groups stood at more than 90%, among which the satisfaction of parents in the preterm and full-term groups reached 96.67% and 93.33%, respectively. No significant difference was observed in parent satisfaction between the two groups (P<0.05).

There are many clinical cases to support the concept that the prone position can significantly improve oxygenation in most (70–80%) patients with ARDS and increase the average PaO2/FiO2 ratio by 35 mmHg (7-9). A mechanism for improving the oxygenation index in ARDS patients by mechanical ventilation in the prone position is as follows (7): (I) relieving the compression of the heart to the lung; (II) increasing the amount of functional residual gas; and (III) redistributing the blood flow and water in alveoli.

A-aDO2 was significantly lower in the prone position than in the supine position (P<0.05), which is consistent with the findings of earlier studies (10-13). A-aDO2 refers to the difference between alveolar oxygen partial pressure and arterial blood oxygen partial pressure. It is generally used as an important clinical index to judge lung ventilation function. Clinically, this increase in index often indicates lung oxygenation dysfunction. This result suggests that the prone position improves the lung oxygenation function of the child compared with the supine position.

In summary, the prone position can effectively improve the oxygenation index of children after surgery and can help to improve their respiratory function. This method is suitable for newborn postoperative NICU ward nursing. At the same time, the nursing staff must pay close attention to the vital signs and the respiratory system function of children in the NICU ward, and the nursing process must be conducted under strictly aseptic conditions. The long-term outcomes and quality of life for survivors with CDH have received an increasing amount of attention. CDH patients appear to be at risk of many long-term sequelae, including lung disease, gastrointestinal disease, poor growth, neurological dysfunction, and hearing loss and musculoskeletal abnormalities (14). Moreover, the quality of life for CDH survivors is reported to be low, which emphasizes the importance of close follow-up and long-term care (14).

Reporting Checklist: The authors have completed the STROBE reporting checklist. Available at http://dx.doi.org/10.21037/apm-20-1003

Conflicts of Interest: All authors have completed the ICMJE uniform disclosure form (available at http://dx.doi.org/10.21037/apm-20-1003). The authors have no conflicts of interest to declare.

Ethical Statement: The authors are accountable for all aspects of the work in ensuring that questions related to the accuracy or integrity of any part of the work are appropriately investigated and resolved. This study was approved by the ethics committee of Huai’an Maternal and Child Health Care Center (ethics approval number 2018012). Informed and signed consent was obtained from the parents of each child. The study was conducted in accordance with the Declaration of Helsinki (as revised in 2013).