Clinical characteristics and outcomes of patients with diffuse large B cell lymphoma treated with R-CHOP-like or CHOP-like regimens: an 8-year experience from a single center

Diffuse large B cell lymphoma (DLBCL) is the most common subtype of non-Hodgkin lymphoma, characterized by aggressive and heterogeneous features. Although DLBCL can be classified into two categories, namely, germinal center B-cell-like (GCB) and non-germinal center B-cell-like (non-GCB), the standard therapy for these two subtypes is the chemotherapeutic regimen called CHOP, which comprises cyclophosphamide, doxorubicin, vincristine, and prednisone. In the last decade, the addition of rituximab (R), an anti-CD20 monoclonal antibody, to the standard chemotherapy regimen has dramatically improved the outcomes of patients with DLBCL (1). Since then, several studies have demonstrated the inability of the International Prognostic Index (IPI) to effectively predict the prognosis of patients with DLBCL. Hence, revised IPI (R-IPI) and National Comprehensive Cancer Network IPI (NCCN-IPI) were generated (2,3). However, the efficacy of these two indicators in prognosis prediction of patients with DLBCL was still insufficient. Although new indicators based on IPI have been proposed, their efficiency in prognosis prediction remains to be tested (4).

About 30–50% patients with DLBCL show resistance to, or relapse after, R-CHOP treatment (5,6). Chimeric antigen receptor (CAR) T cell therapy has been reported as a novel promising therapy for refractory or relapse (R/R) DLBCL patients. In clinical trials, the overall response rate of CAR-T cell therapy in R/R DLBCL patients was more than 80%, and a few patients achieved long-term remission (7,8). In general, the lack of standard techniques for T cell or peripheral blood mononuclear cell harvesting and CAR-T cell manufacturing and quality control may limit the clinical applications of this therapeutic regimen (9). The efficacy of novel target drugs in R/R DLBCL patients was not better than that of CAR-T cell therapy in clinical trials (10-17).

Here, we report the real-world data of the clinical characteristics and outcomes of patients with DLBCL that were treated with or without rituximab.

We present the following article in accordance with the STROBE reporting checklist (available at http://dx.doi.org/10.21037/apm-19-589).

Diagnosis was confirmed through tissue biopsy or surgical excision according to the World Health Organization (WHO) classification (18). Newly diagnosed patients with DLBCL who were 14 years or older and received no less than four cycles of immunochemotherapy or chemotherapy were included in the study. Patients with primary mediastinal lymphoma, primary central nervous system (CNS) lymphoma, or positive serology for human immunodeficiency virus were excluded. Data were collected from the medical records of patients included from 1 January 2011 to 31 December 2018 at Fujian Medical University Union Hospital, Fujian province, China.

Treatment response was evaluated according to the International Working Group Response Criteria for Malignant Lymphoma (19). Newly diagnosed patients with DLBCL were treated with CHOP-like or R-CHOP-like regimens. In case of disease progression or relapse, patients were treated with second-line regimens as recommended by NCCN guidelines, such as R-DHAP or R-DA-EPOCH (20).

All statistical analyses were performed using SPSS 19.0 for Windows. Dichotomous and continuous variables were compared using the Chi-square test and t-test, respectively. Time-to-event data were analyzed using the Kaplan-Meier method, and differences between them were analyzed using the log-rank test. Variables known to be significant prognostic factors in the univariate analysis were further used for multivariate analysis. Two-sided P values <0.05 were considered statistically significant.

Demographic and clinical characteristics of patients

Treatment and response of patients

The overall response rate was 83.3%, and 67 (11.8%) patients achieved stable disease (SD) or suffered from progressive disease (PD) after receiving CHOP-like or R-CHOP-like regimen. Response to chemotherapy or immunochemotherapy could not be assessed in 28 patients, as their imaging assessments were incomplete. A total of 156 (27.3%) patients became primarily refractory to the therapeutic regimen, suffered from PD, or relapsed after achieving complete response (CR) during treatment or follow-up. Further, 34 patients received different types of cell therapy as follows: 24 received autologous stem cell transplantation (SCT), 2 received allogeneic SCT, and 8 received CAR-T cell therapy. Radiation was administered to 45 patients because they had residual disease after chemotherapy or immunochemotherapy or suffered from PD or relapse with CNS involvement (Table 2). 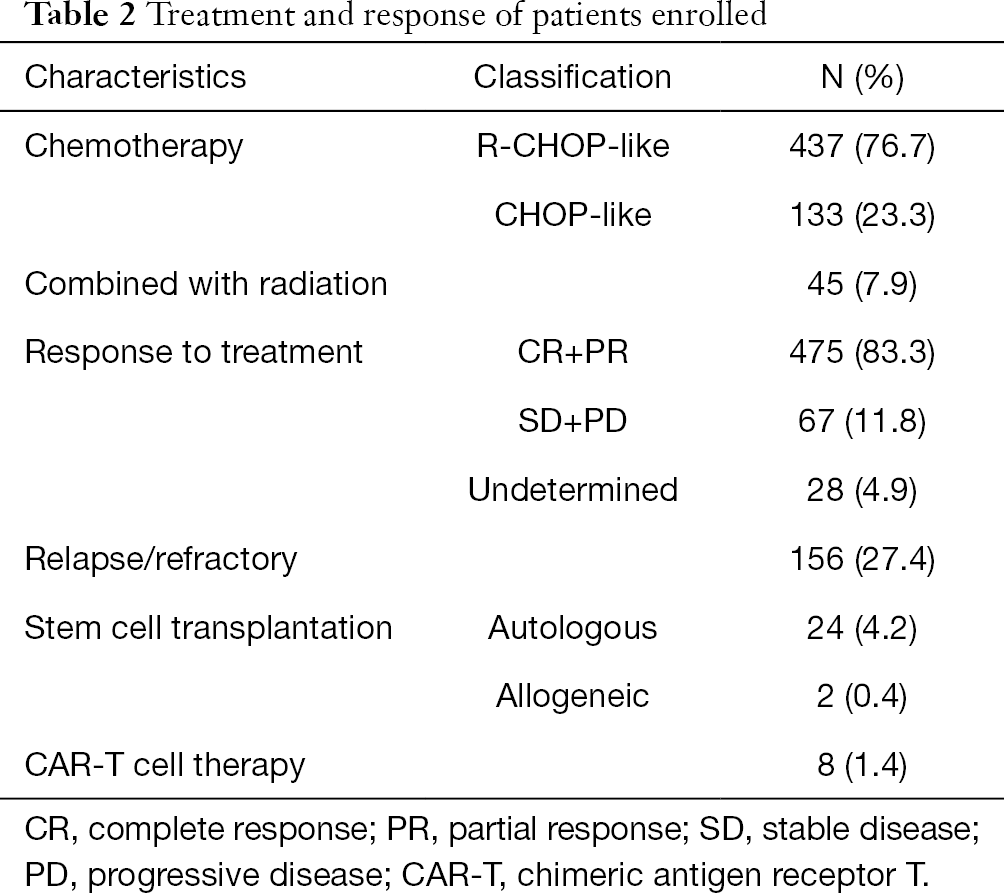 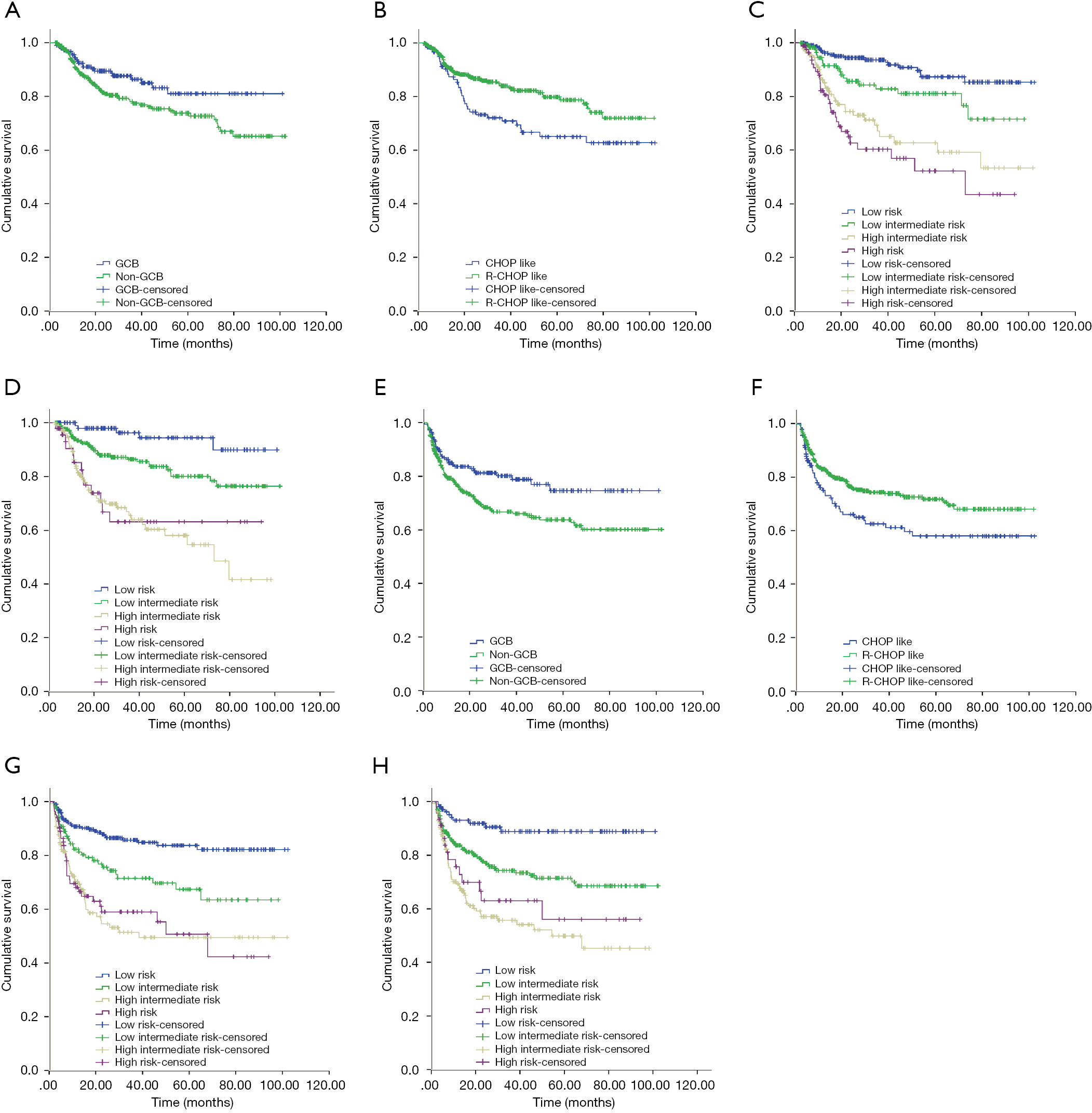 Kaplan-Meier curve and univariate analysis showed that GCB subtype, R-CHOP-like treatment, Ann Arbor stage I-II, not more than 1 extranodal disease site, ECOG score ≤1, normal serum LDH level, normal serum β2-MG level, absence of B symptoms, and lower IPI or NCCN-IPI score were associated with longer OS and PFS, and were favorable prognostic factors for OS and PFS. Age ≤60 years was associated with longer OS and served as a favorable prognostic factor for OS but not PFS (Tables 3,4, Figure 1). Kaplan-Meier curves for OS and PFS showed convergence of high-intermediate-risk and high-risk subgroups classified by both IPI and NCCN-IPI (Figure 1). 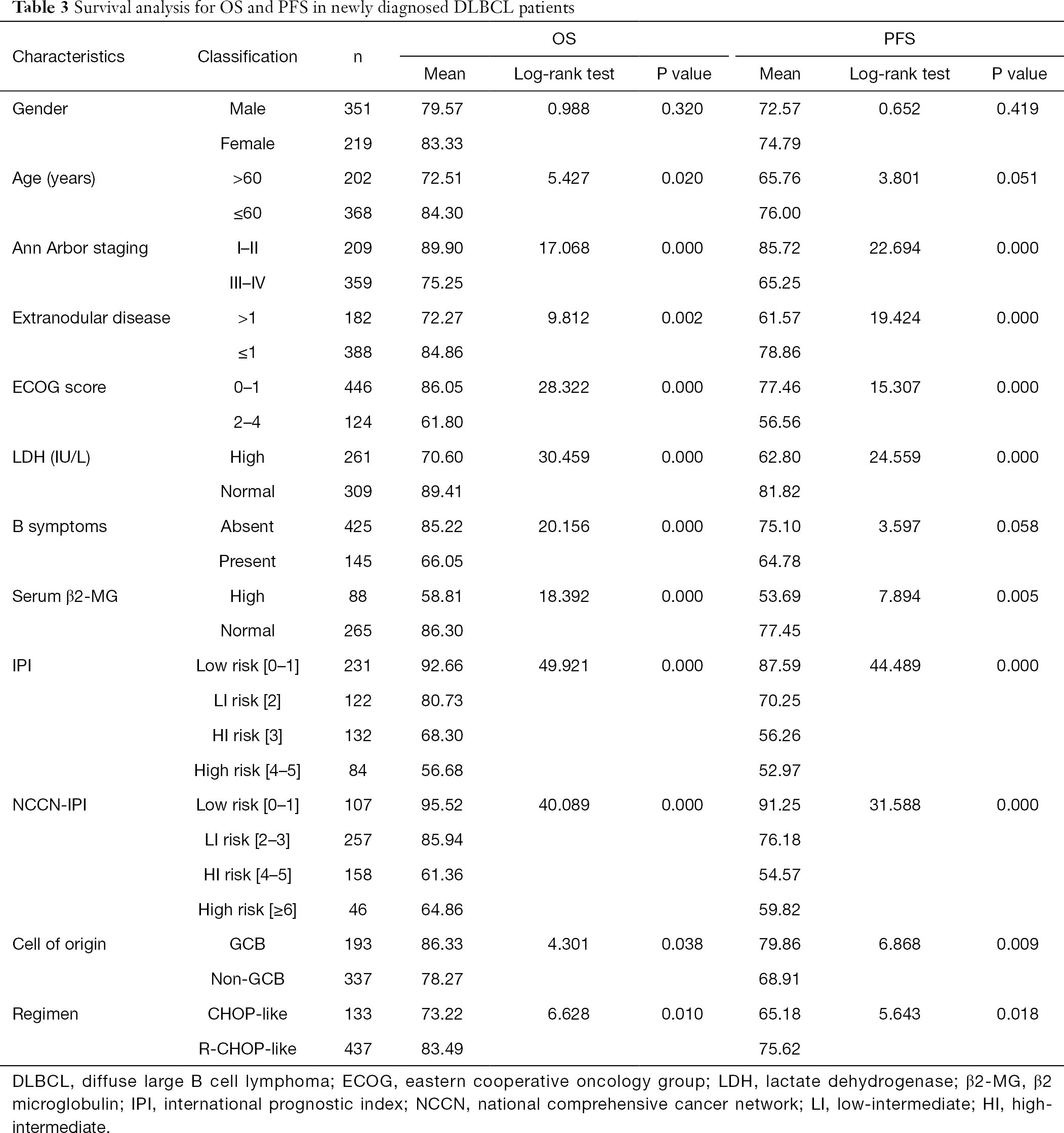 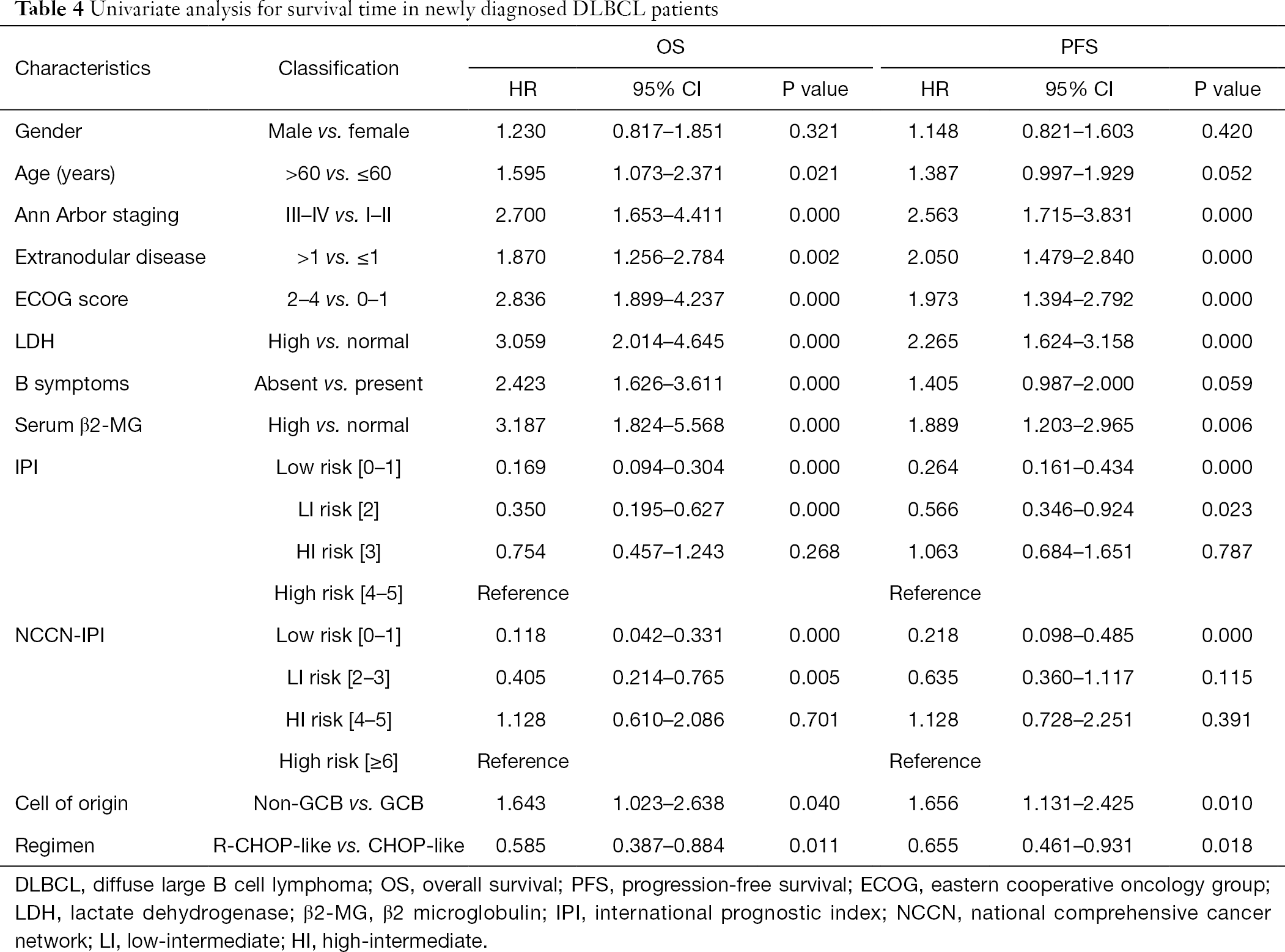 We found that most patients were not more than 60 years, male, and had non-GCB subtype. Most patients had IPI scores 2 and NCCN-IPI scores ≤3. ECOG score for most patients was less than 2. Serum β2-MG levels were higher than normal in some patients, while the positive rate of Ki-67 expression in most patients was higher than 80%. These results are similar to those reported by other studies from China (30,31). Survival analysis showed that some clinical characteristics such as age >60 years, Ann Arbor stage III–IV, extranodular disease >1 site, ECOG score 2–4, serum LDH >245 IU/L, serum β2-MG >3 g/L, presence of B symptoms, and non-GCB subtype were associated with shorter PFS and/or OS, and were unfavorable prognostic factors for patients with DLBCL in our study. Similar results have been observed by other researchers worldwide (28,30-32).

IPI score served as the most important prognostic indicator for non-Hodgkin lymphoma, including DLBCL. It comprises age, Ann Arbor staging, extranodular disease, ECOG score, and serum LDH level. Several reports have demonstrated that risk stratification based on IPI in DLBCL is of limited value, owing to the inclusion of rituximab to standard chemotherapy (2). Therefore, NCCN-IPI was proposed and applied to many studies in recent years (3). We analyzed the role of these two indices in determining the prognosis of patients with DLBCL who received regimens containing rituximab. According to both IPI and NCCN-IPI, patients could be divided into four groups as follows: low-risk, low-intermediate-risk, high-intermediate-risk, and high-risk. Although IPI and NCCN-IPI were independent prognostic factors for all patients with DLBCL in our study, univariate and multivariate analyses showed us that IPI and NCCN-IPI had limited prognostic values for the OS and/or PFS of patients that are at higher risk, especially high-intermediate- and high-risk patients. These results declined the prognostic values of IPI and NCCN-IPI for patients with DLBCL who received no less than three cycles of rituximab. A new index GELTAMO-IPI combining serum β2-MG levels with NCCN-IPI has been recently proposed (4). As we lacked data on serum β2-MG in approximately 40% patients, we could not objectively evaluate this index or compare it with other indices.

Several reports have demonstrated primary refractory, secondary refractory, and relapse in 30–50% of DLBCL patients after comprehensive treatment. Survival of these patients was worse than that of other patients without these complications (5,6,38). The ratio of R/R in patients with DLBCL was not more than 30% in our study. Most patients were at low- and low-intermediate-risk, thereby contributing to this phenomenon. Hematopoietic SCT was considered as an effective approach for DLBCL patients with high-risk, poor prognosis, and relapse/refractory disease (39). However, some patients could not benefit from this method in our study. Therefore, the mechanisms underlying R/R DLBCL and development of therapeutic methods remain to be elucidated.

Several studies have shown that small-molecule inhibitors such as selective inhibitors of nuclear export, dual mTORC1/2 inhibitors, and aurora A kinase inhibitors alone or in combination with chemotherapy exhibited antitumor effects in patients with R/R DLBCL. However, these inhibitors were not more effective than CAR-T cell therapy, a novel cellular immunotherapy (10-17,40-42). No patient in our study participated in clinical trials of small-molecule inhibitors. As far as CAR-T cells are concerned, T cells are genetically modified to express an artificial receptor comprising an antigen recognition domain, a co-stimulatory domain, and an intracellular signaling domain to facilitate recognition of a specific antigen expressed on tumor cells (43). Two products of CAR-T cells, axicabtagene ciloleucel (axi-cel) and tisagenlecleucel, targeting CD19 specifically expressed on B lymphocytes have been shown to be effective for R/R B cell malignancies with high response rates and potential cure (44,45). However, limitations related to T cell harvesting and CAR-T cell manufacturing, disease progression during manufacturing, and resistance to CAR-T cell therapy have impeded their clinical applications (9,46). Only eight patients received CAR-T cell therapy and all of them achieved PR and survived; however, the long-term effects remain to be studied, as some patients with R/R DLBCL relapsed after receiving CAR-T cell therapy (44,45).

In conclusion, rituximab has been proven to be an important drug to improve the survival of patients with DLBCL. The prognostic values of IPI and NCCN-IPI have declined for patients with DLBCL in the rituximab era. New prognostic indices, thus, need to be proposed and validated to accurately and precisely predict the prognosis of patients. Novel prognostic markers based on molecular or cytogenetic aberrance may be more effective than others in prognostic prediction. New therapeutic approaches such as CAR-T cell therapy and novel drugs have demonstrated significant efficacy in anti-lymphoma treatment of relapse/refractory DLBCL patients and could serve as powerful strategies for treating DLBCL patients in future.

Reporting Checklist: The authors have completed the STROBE reporting checklist. Available at http://dx.doi.org/10.21037/apm-19-589

Conflicts of Interest: All authors have completed the ICMJE uniform disclosure form (available at http://dx.doi.org/10.21037/apm-19-589). The authors have no conflicts of interest to declare.

Ethical Statement: The authors are accountable for all aspects of the work in ensuring that questions related to the accuracy or integrity of any part of the work are appropriately investigated and resolved. The study was conducted in accordance with the Declaration of Helsinki (as revised in 2013). This study was approved by the ethics committee of Fujian Medical University Union Hospital (No. 2019KJCX047). As this study performed retrospective data analysis and had no effect on patients’ treatments, patients’ consents were not obtained.