Efficacy and safety of gemcitabine plus capecitabine in the treatment of advanced or metastatic pancreatic cancer: a systematic review and meta-analysis

The outcomes of patients with locally advanced or metastatic pancreatic cancer remain poor (1). The median overall survival (OS) for those with stage IV disease is less than 12 months (2,3), even when patients are treated with systemic chemotherapies or combination chemotherapies (4,5).

Since 1997, the single-agent gemcitabine (Gem) has been a standard-of-care first-line treatment for advanced pancreatic cancer, with a significant survival benefit and a safety profile compared to 5-fluorouracil monotherapy (6). Subsequently, various Gem combinations with different chemotherapeutic regimens, comprising paclitaxel, capecitabine (Cap), and platinum, have been applied in advanced pancreatic cancer patients (7,8). MPACT study showed that the combination chemotherapy regimen, Gem/nab-paclitaxel, achieved a higher response rate and longer median overall survival (OS) than Gem (3). Another randomized controlled clinical trial reported that Gem plus oxaliplatin, compared with Gem alone, resulted in an improved objective response rate (ORR) and progression-free survival (PFS) (9). However, in an Eastern Cooperative Oncology Group trial, Gem combined with oxaliplatin failed to improve OS in advanced pancreatic cancer patients (10). Additional combination chemotherapy regimens have also become the treatment strategies for advanced pancreatic cancer. In 2011, a cornerstone study in exploring advanced or metastatic pancreatic cancer chemotherapy was published by Conroy (2). The FOLFIRINOX (a combination of fluorouracil, leucovorin, oxaliplatin, and irinotecan) treatments was associated with a significant improvement in OS versus Gem monotherapy (2). Owing to the greater toxicities, the adoption of FOLFIRINOX for patients with good performance status (11,12). Furthermore, although FOLFIRINOX was associated with slightly longer median OS in relative to Gem-based combination chemotherapy, the difference was not statistically significant (13).

Cap is an oral fluoropyrimidine that has been approved for the treatment of various cancer types (14,15). The improved safety and similar benefit of Cap compared with intravenous fluorouracil and the convenience of oral administration make Cap an attractive treatment option in advance pancreatic cancer (4,16). Cap monotherapy had been demonstrated similar clinical activity compared with single-agent Gem in advanced pancreatic cancer (6,17).

The combination of Gem and Cap (GemCap) has been shown promising antitumor activity in phase I and II clinical trials in patients with advanced pancreatic cancer (18-21). Although GemCap was associated with a trend toward improved OS but failed to improve OS at a statistically significant level compared with Gem alone (4,16,22). At the moment, both GemCap combination therapy and Gem monotherapy are the general treatment strategies for advanced or metastatic pancreatic cancer in our hospital. We have noticed that GemCap combination therapy might be superior to Gem monotherapy, however, published clinical data remain controversial and could not directly support this hypothesis. Therefore, associated clinical trials published up to 2019 were collected to assess the benefit and risk of GemCap combination chemotherapy in patients with advanced or metastatic pancreatic cancer. Here, we systematically reviewed the reported clinical trials and performed a meta-analysis of the available data regarding GemCap therapy on survival estimates, tumor response rates, and tolerability. We conducted the meta-analysis following the Preferred Reporting Items for Systematic Reviews and Meta-analyses guideline (available at http://dx.doi.org/10.21037/apm-20-45) (23).

A systematic literature search was performed in the electronic databases PubMed, Cochrane Library, Web of Science, and EMBASE. The last search was run on Jul 10, 2019. Search terms included: “advanced pancreatic cancer or advanced pancreatic adenocarcinoma or metastatic pancreatic cancer or metastatic pancreatic adenocarcinoma”, “gemcitabine”, “capecitabine”, and “trial or clinical trial or randomized clinical trial or randomized controlled trial”. Only articles written in English were assessed. The references of articles were searched for more eligible studies.

Eligible studies included advanced or metastatic pancreatic cancer patients of any age who received GemCap, regardless of subsequent surgical therapy or radiotherapy. Patients treated with GemCap plus other chemotherapy or target therapy at the same time were excluded. Conference abstracts without full text and retrospective studies were either excluded. For multiple published articles that were identified reporting on the same clinical trial, the one with the most complete publication data was eligible. Any discrepancies were resolved by discussion.

Survival outcomes from randomized controlled trials were assessed by HR (OS and PFS)/OR (ORR and DCR) and 95% CIs using RevMan version 5.3 software (Cochrane Collaboration’s Information Management System). We tested for heterogeneity used I2. When P≥0.10 and I2 ≤50%, the heterogeneity test showed no statistical significance. Thus, a fixed-effects model was used. Otherwise, a random-effects model was applied. P<0.05 was considered statistically significant. 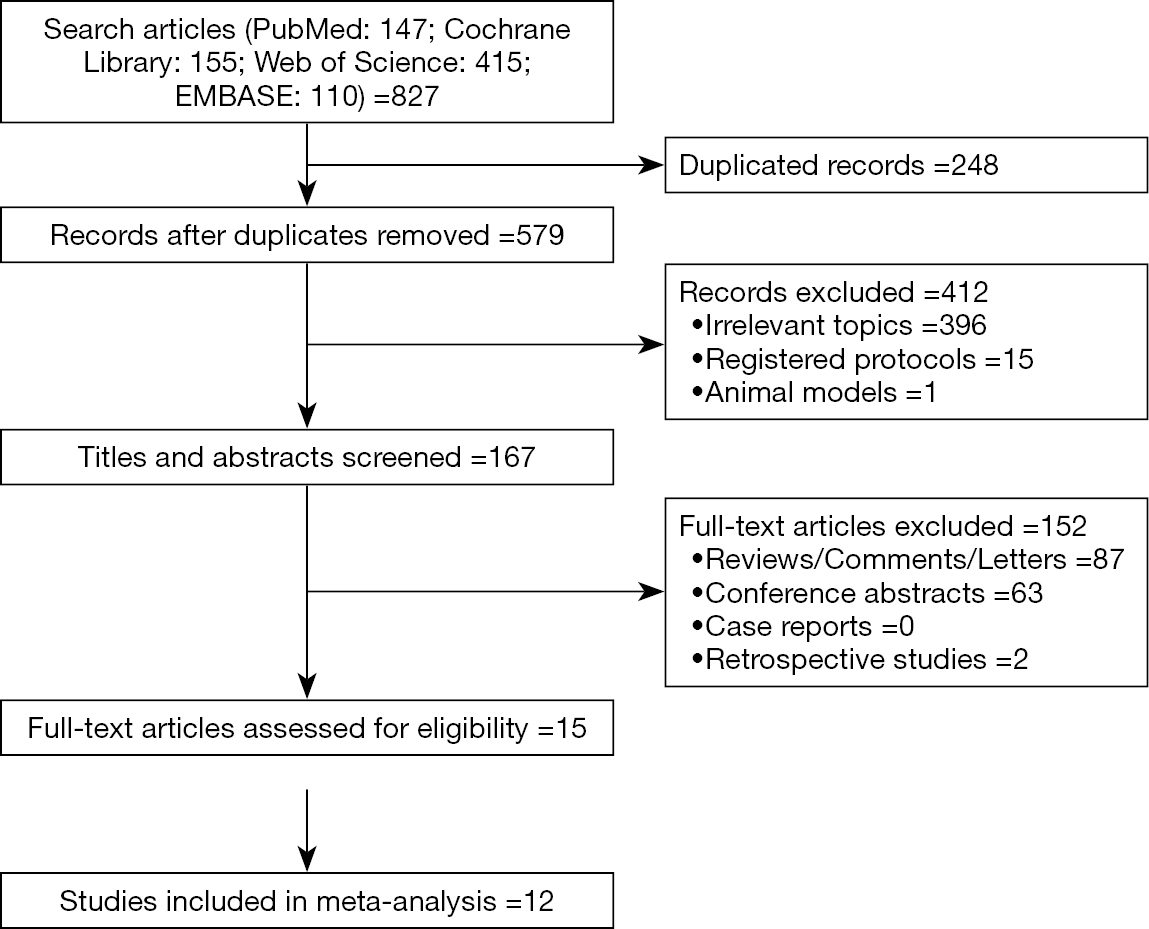 Study characteristics are presented in Table 1. Nine studies were multi-center clinical studies, two were single-center clinical studies, and the other three did not mention it. One study was a phase I study, one was a phase I/II study, eight were phase II studies, and the other five were randomized controlled phase III trials. Patients in 13 studies received first-line GemCap chemotherapy and in two studies were given second- or more-line GemCap chemotherapy. Using the Jadad score, nine studies were classified as low quality (a score of ≤2), whereas six studies as high quality (a score of ≥3). 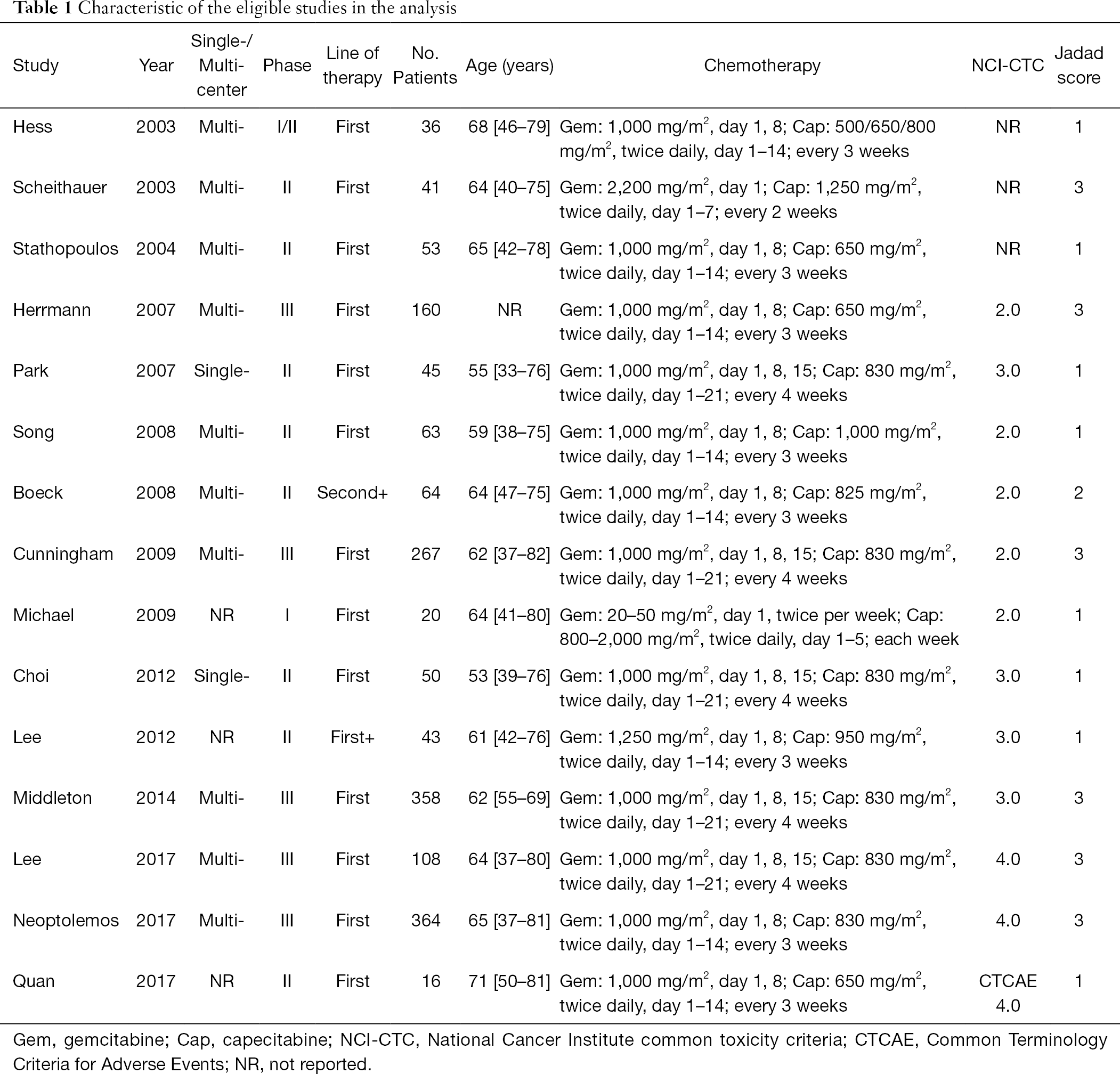 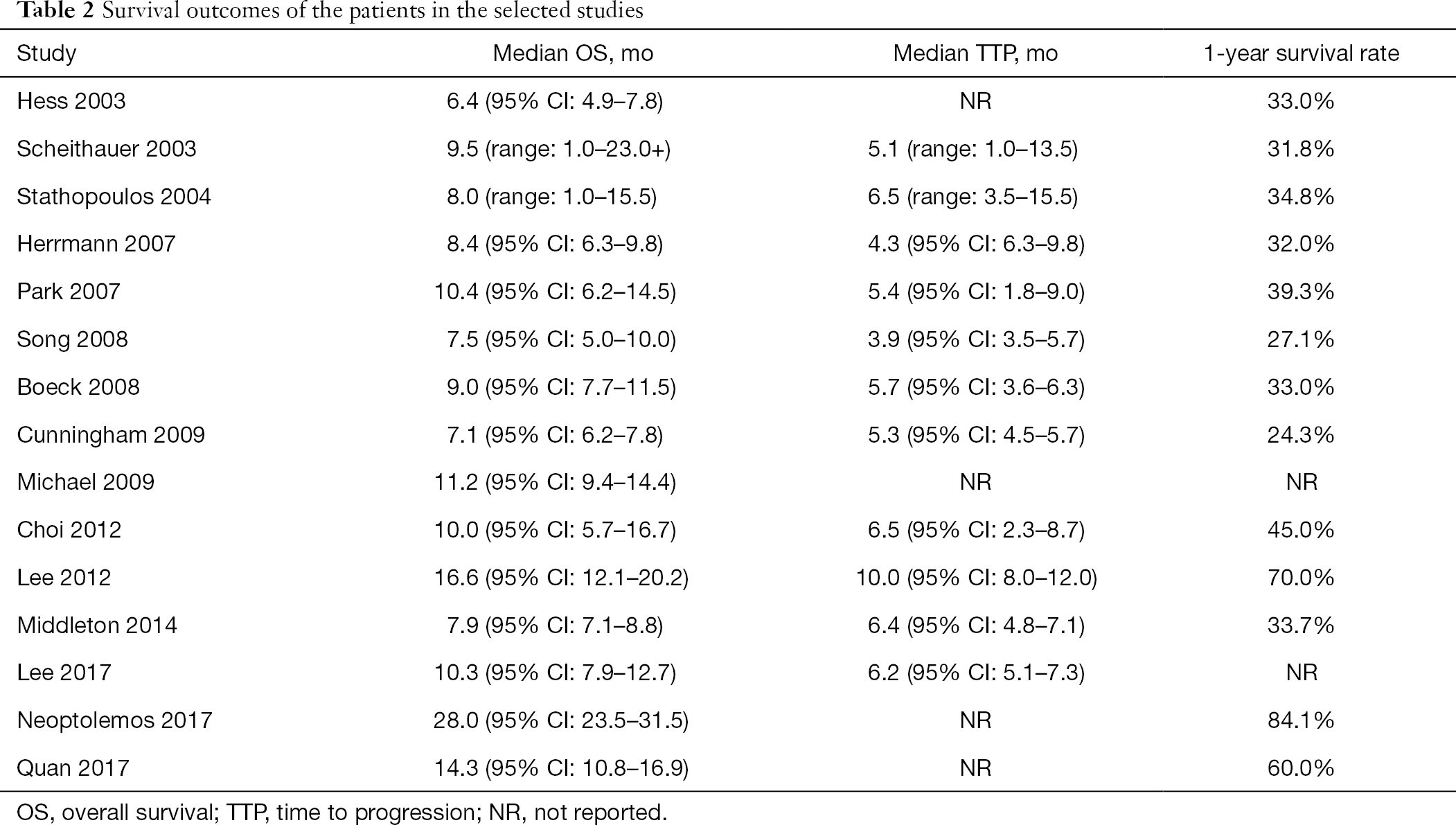 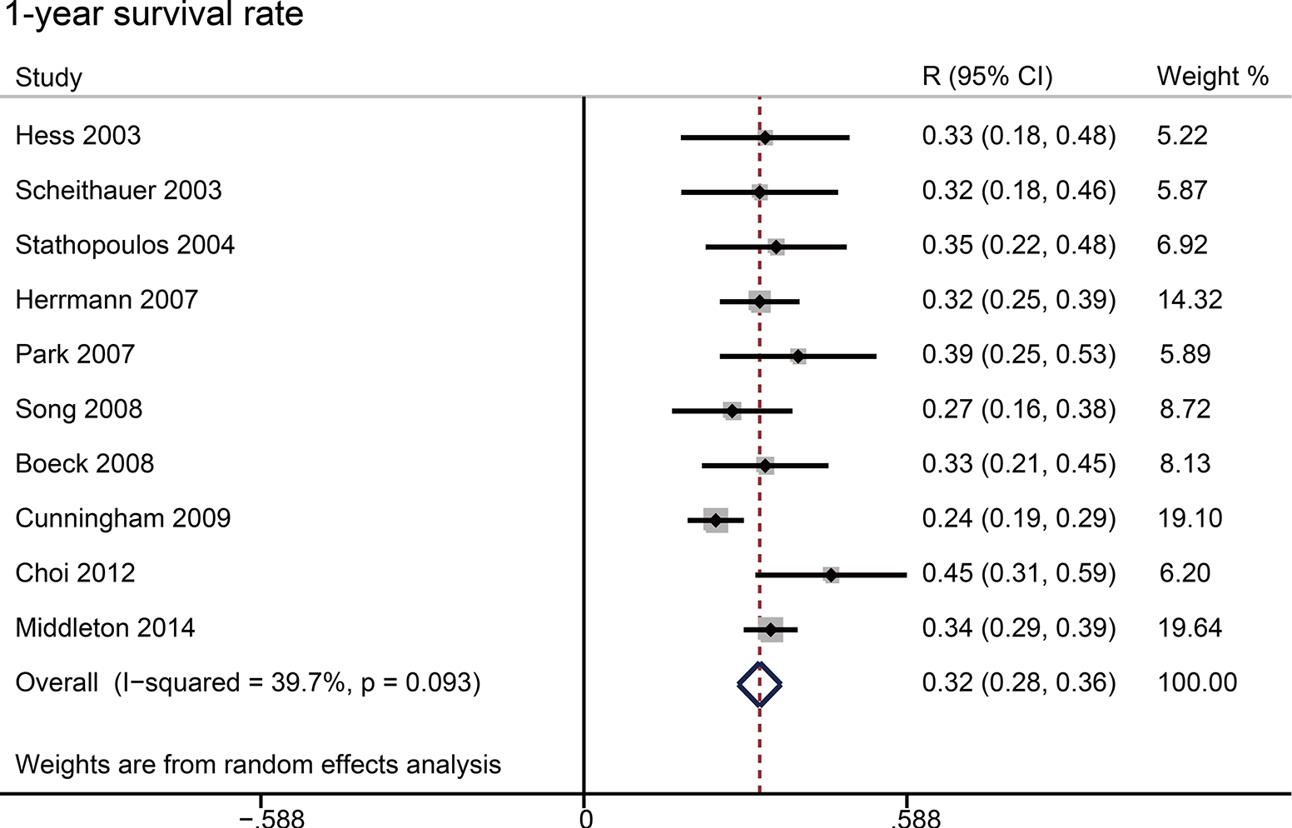 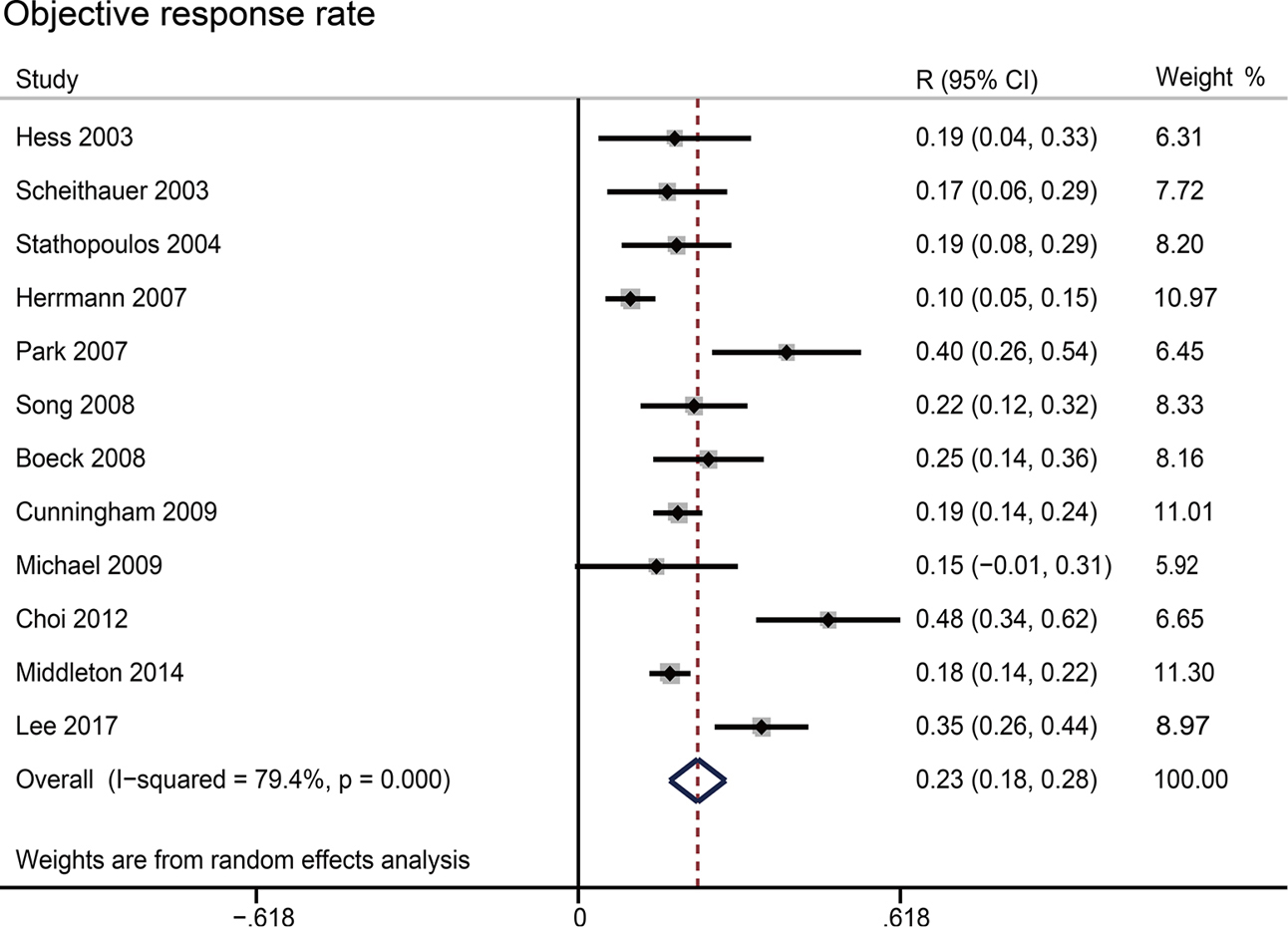 Figure 5 Forest plot of the objective response rates in patients treated with GemCap. 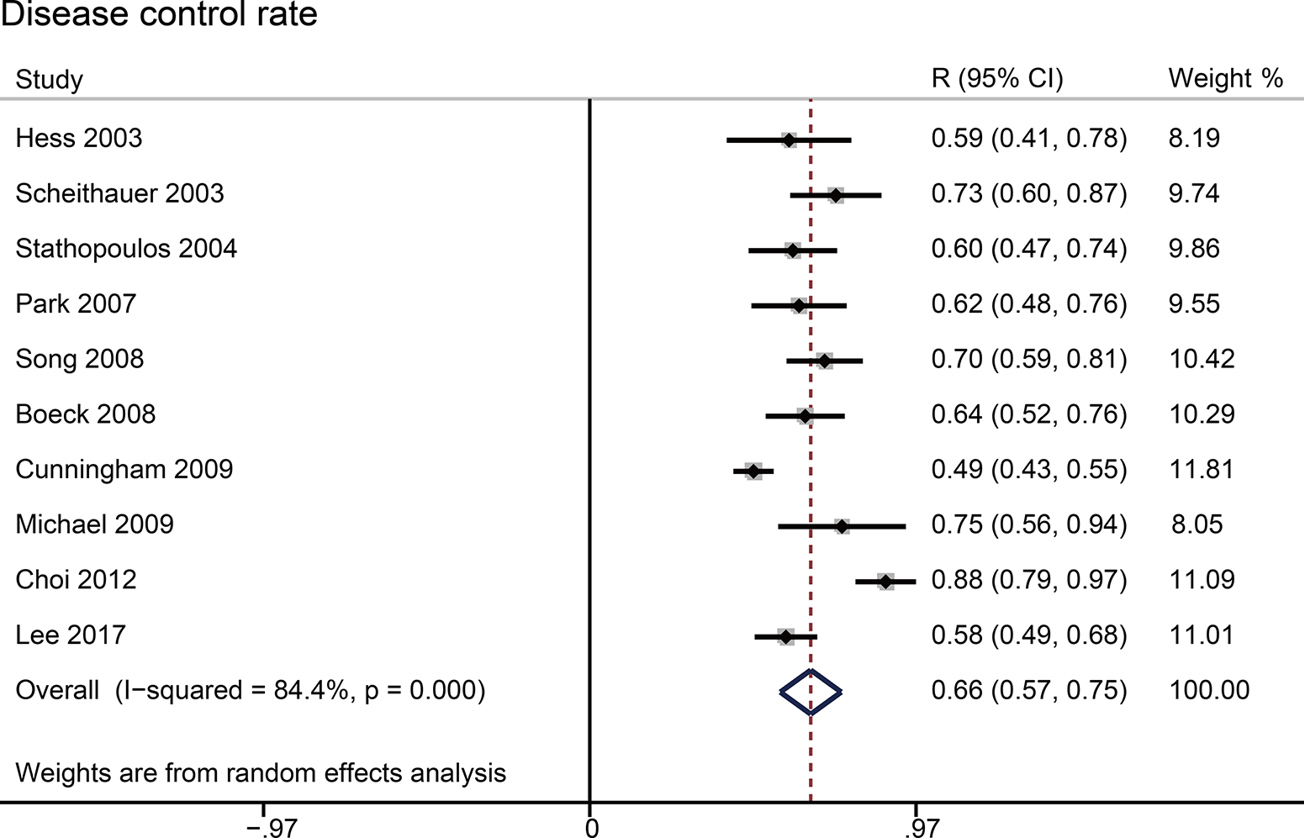 Figure 6 Forest plot of the disease control rates in patients treated with GemCap.

Figure 7 Forest plot of odds ratios for objective response (A) and disease control (B) in patients between GemCap group and Gem group. 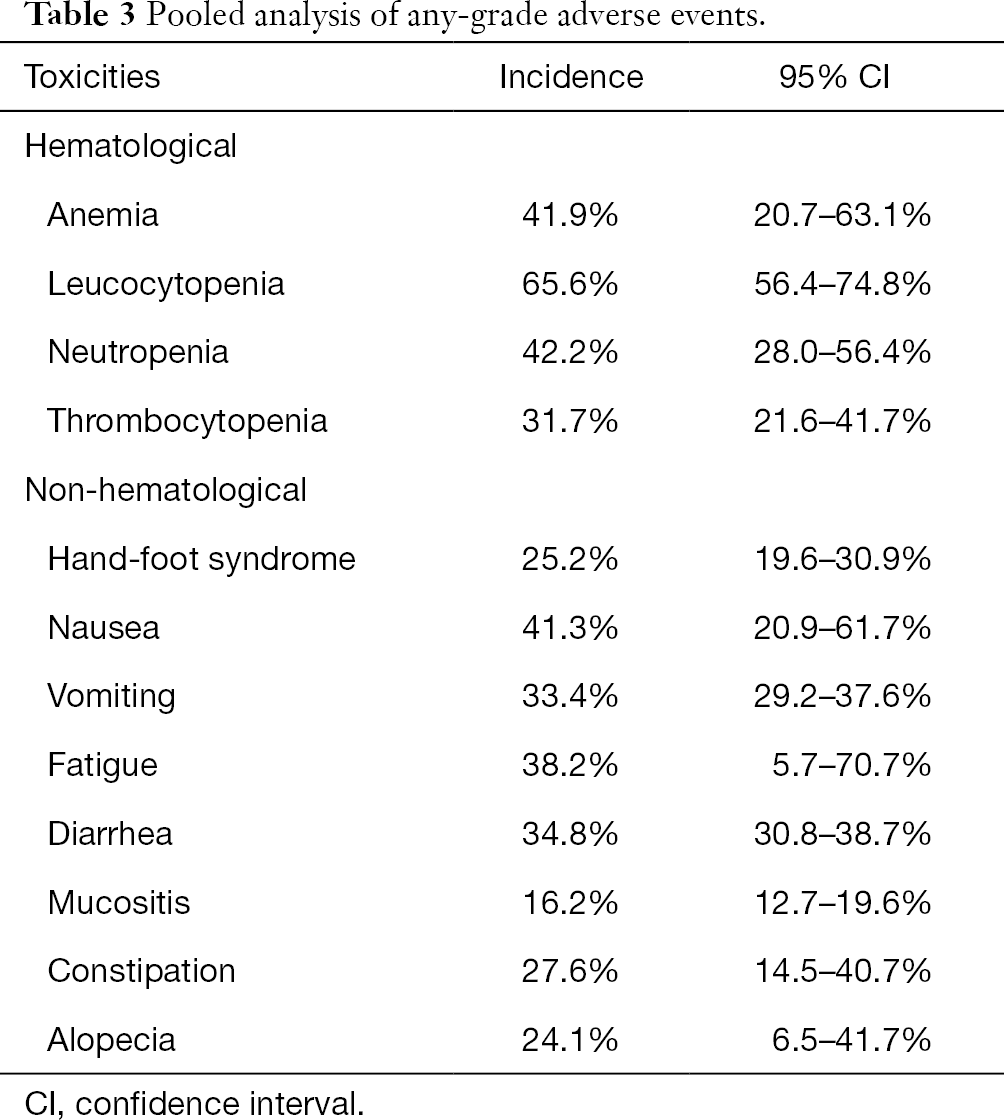 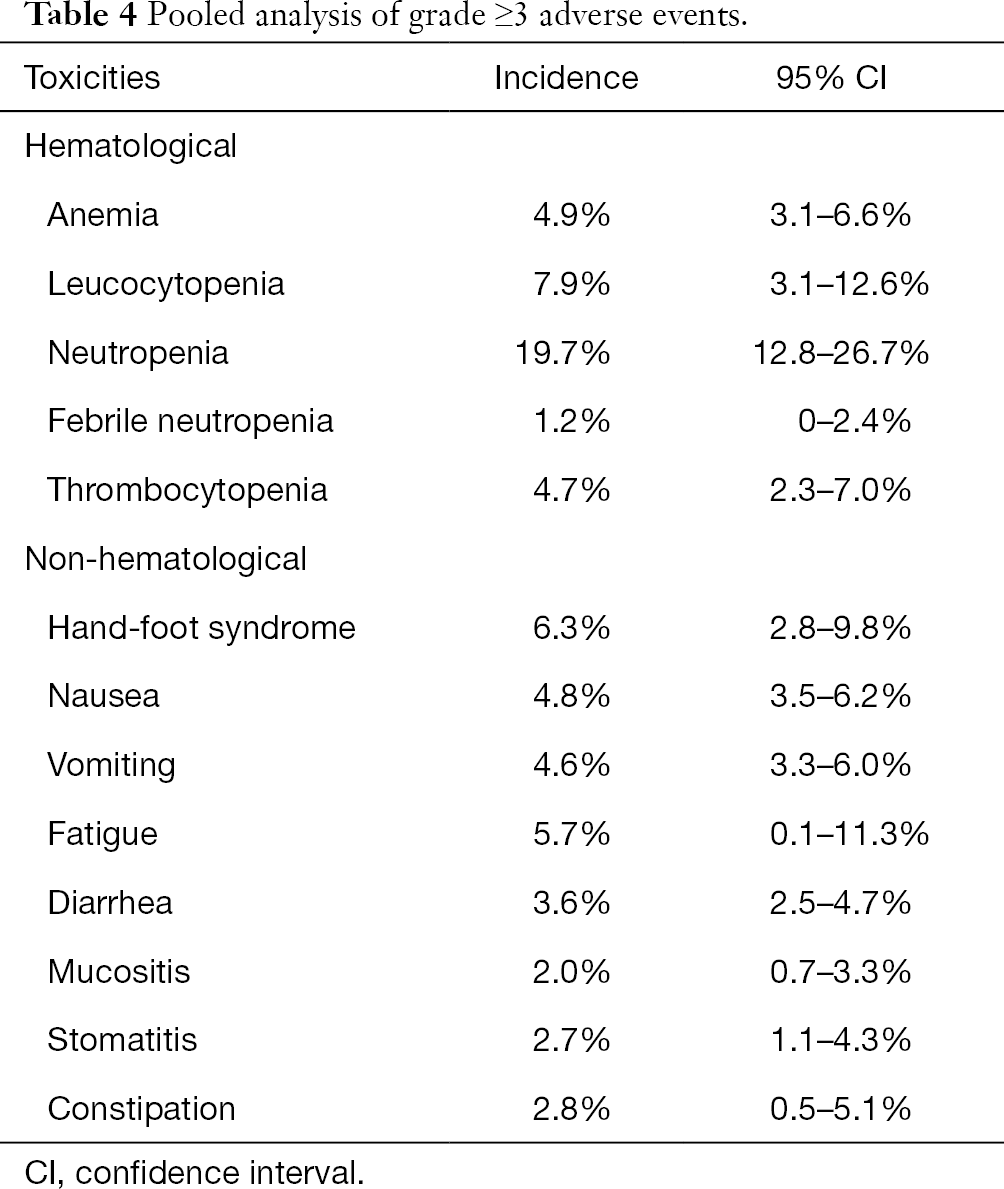 In our study, the addition of Cap to Gem showed a significant improved OS (P=0.007) and PFS (P=0.0002) with no significant intertribal heterogeneity (I2 =0%, P>0.05) compared with Gem alone. After GemCap therapy, 22.9% (95% CI: 17.6–28.3%) of patients achieved objective response and 65.7% (95% CI: 56.7–74.8%) of patients achieved disease control. About ten deaths were attributed to GemCap. A potential mechanism in explaining the results is that a Cap-induced decrease in cytidine deaminase activity could lead to the improvement of survival outcomes with GemCap therapy, but also interpret the toxicities associated with the combination treatment (39).

Adding capecitabine to standard gemcitabine reduced the hazard of death. Accordingly, phase I/II studies were conducted to determine the safety and efficacy of a first-line regimen combining Gem, Cap and oxaliplatin. Petrioli reported an ORR of 35.2% and a DCR of 79.4% in the treatment of combining all three drugs in advanced pancreatic cancer (42). Hess showed ORR in 41% of patients and DCR in 78% of patients (43). However, hematologic and non-hematologic toxicities were more severe with a combination of three-agent therapy in both studies.

The safety profile of gemcitabine and ﬂuoropyrimidine is known to be non-overlapping, and combination therapy of these drugs is well tolerated. Furthermore, both drugs target the pyrimidine biosynthesis pathway and may, therefore, exert synergistically (44,45). Another oral ﬂuoropyrimidine, S-1, consists of tegafur, 5-chloro-2,4-dihydroxypyridine, and potassium oxonate at a molar ratio in 1:0.4:1, and inhibits dihydropyrimidine dehydrogenase. S-1 had proven efficacy in metastatic pancreatic cancer (46). An early phase II study of S-1 for metastatic pancreatic cancer reported a 21.1% partial response rate (47). Furthermore, two phase II studies of combined gemcitabine and S-1 in patients with advanced pancreatic cancer suggested that repeated 3-week cycles of combination chemotherapy with gemcitabine and S-1 were effective, convenient, and safe (48,49). A recent meta-analysis of the addition of S-1 to Gem-based chemotherapy showed a statistically significant improvement in survival and suggested Gem plus S-1 as first-line chemotherapy for patients with advanced or metastatic pancreatic cancer (50).

For patients with local advanced and inoperable pancreatic cancer, the potential for tumor down-staging with induction chemo-/radio-therapy is alluring to maximize the chance of complete resection. The results from Andriull et al. supported the claim: among 362 unresectable patients evaluated in 13 trials, 28% (95% CI: 21–35%) of patients were down-staged sufficiently to an objective response. However, the relatively low resection rate after preoperative therapy in this population of patients required very candid discussions with patients regarding the goal of therapy. Fortunately, 72% (95% CI: 59–86%) of surgically explored patients underwent a successful pancreatic resection (52).

There were several limitations in the present study. First, there were only three randomized controlled trials included in the meta-analysis. Although no publication bias was shown in the single-arm analyses, heterogeneity across the trials might bias the results. Second, the dosages of GemCap were inconsistent and additional therapies (e.g., radiotherapy) had been added to the chemotherapy. Third, pooled analyses of Gem or Cap monotherapy were not comprised in this study as we mainly focused on the combination therapy. Future studies are needed to comprehensively compare the efficacy of gemcitabine plus capecitabine combination therapy, gemcitabine monotherapy, and capecitabine monotherapy.

We thank the Jian-Bin Wang and Wen-Qing Li in Bi-Cheng Wang workgroup for their critical comments on the initial idea of the study.

Funding: This study was supported by the Independent Innovation Foundation of Wuhan Union Hospital (Grant number: 2019-109 to Bi-Cheng Wang).

Conflicts of Interest: All authors have completed the ICMJE uniform disclosure form (available at http://dx.doi.org/10.21037/apm-20-45). The authors have no conflicts of interest to declare.