For advanced non-small cell lung cancer (NSCLC) patients harboring the activating mutant epidermal growth factor receptor (EGFR), EGFR tyrosine kinase inhibitors (TKIs) are the standard first-line therapy (1,2). Nevertheless, essentially all the patients who respond to the treatment will develop acquired resistance. The diversity of EGFR-TKI failure could be categorized into three modes (3). EGFR-TKI continuation is preferred in a subsequent setting for gradual progression. For local progression, continuation of EGFR-TKI as a systemic treatment plus local intervention is rational in clinical practice. For patients with aggressive progression after EGFR-TKI failure, chemotherapy or osimertinib are recommended depending on the acquired mutation. At the time of aggressive progression, 60% or above of patients are found to have the T790M mutation in their EGFR (4,5). The presence of T790M mutation reduces the binding of first-generation or second-generation EGFR-TKIs to the ATP-binding pocket of EGFR, thereby reducing EGFR-TKI–mediated inhibition of downstream signaling and potentially leading to disease progression. The standard therapy for patients who acquired the T790M mutation after first-line TKIs is osimertinib which has been confirmed in ARUA3 (6). How to manage T790M-negative patients after first-line EGFR-TKI failure continues to be controversial. In most cases, platinum-based chemotherapy is highly recommended (7) and continuation of TKI combined with chemotherapy has not been shown to benefit the patients (8).

Anlotinib is a novel multi-target TKI for tumor angiogenesis and tumor cell proliferation. The major targets include vascular endothelial growth factor receptor type 2 and 3 (VEGF 2, 3), platelet-derived growth factor-β (PDGFR-β), fibroblast growth factor receptor (FGFR), and stem cell-factor receptor (c-Kit). Anlotinib has been approved by the National Medical Products Administration (NMPA) based on the ALTER 0303 trial in China (9) as a third-line or beyond treatment for advanced NSCLC.

We present the following article in accordance with the STROBE reporting checklist (available at http://dx.doi.org/10.21037/apm-20-105).

In this retrospective study, we enrolled 20 patients who were given anlotinib after first-line therapy failed and another 42 patients who received platinum-pemetrexed chemotherapy (about 1:2 ratio) as a control group. All the patients were confirmed T790M-negative on the cobas EGFR Mutation Test, while disease progression after first-line EGFR-TKIs therapy. Patients were given anlotinib (12 mg) once daily from day 1 to day 14 (21 days as a course) until disease progression or intolerance was observed. In the chemotherapy cohort, intravenous pemetrexed (500 mg per square meter of body-surface area) plus either carboplatin [target area under the curve 5 (AUC5)] or cisplatin (75 mg per square meter) every 3 to 4 weeks for four to six cycles was administered. Patients without disease progression after four to six cycles of platinum therapy plus pemetrexed continued at pemetrexed maintenance dose until disease progression or intolerance. Baseline and follow-up chest CT examinations were performed for every patient before and during therapy. Follow-up CT examinations were performed every two courses to evaluate the response to anlotinib or chemotherapy. The Response Evaluation Criteria in Solid Tumors (RECIST v1.1) were applied to assess responses to therapy. The follow-up ended on December 9th, 2019.

Objective response rate (ORR) was defined as the portion of patients who achieved complete response (CR) and partial response (PR). Progression-free survival (PFS) was calculated from the beginning of the second line therapy to disease progression or the last follow-up visit. SPSS22.0 statistical software (IBM, Armonk, NY, USA) was used for statistical analyses. The logistic regression model was used to detect the clinical characteristics related to PFS. Kaplan-Meier method and the log-rank test were used to analyze PFS. P values <0.05 were considered statistically significant.

A total of 62 stage IV NSCLC patients without EGFR T790M mutation confirmed using the cobas EGFR Mutation Test (Roche Molecular Systems) after first-line EGFR-TKIs therapy were enrolled in our retrospective study from July 2018 to July 2019. All the patients were diagnosed with adenocarcinoma before the first-line EGFR-TKIs treatment. Demographic and clinical characteristics of all patients are shown in Table 1. At the endpoint, the median follow-up for all patients was 7.3 months. The median PFS of the second-line therapy among all patients was 4.0 months (Figure 1). Progression events occurred in 17 patients (85%) in the anlotinib group and 35 (83%) in the platinum-pemetrexed group. The duration of PFS was significantly longer in the platinum-pemetrexed group than that in the anlotinib group (median, 4.5 vs. 3.0 months; HR, 1.972; 95% CI, 1.078 to 3.607; P=0.021) (Figure 2). 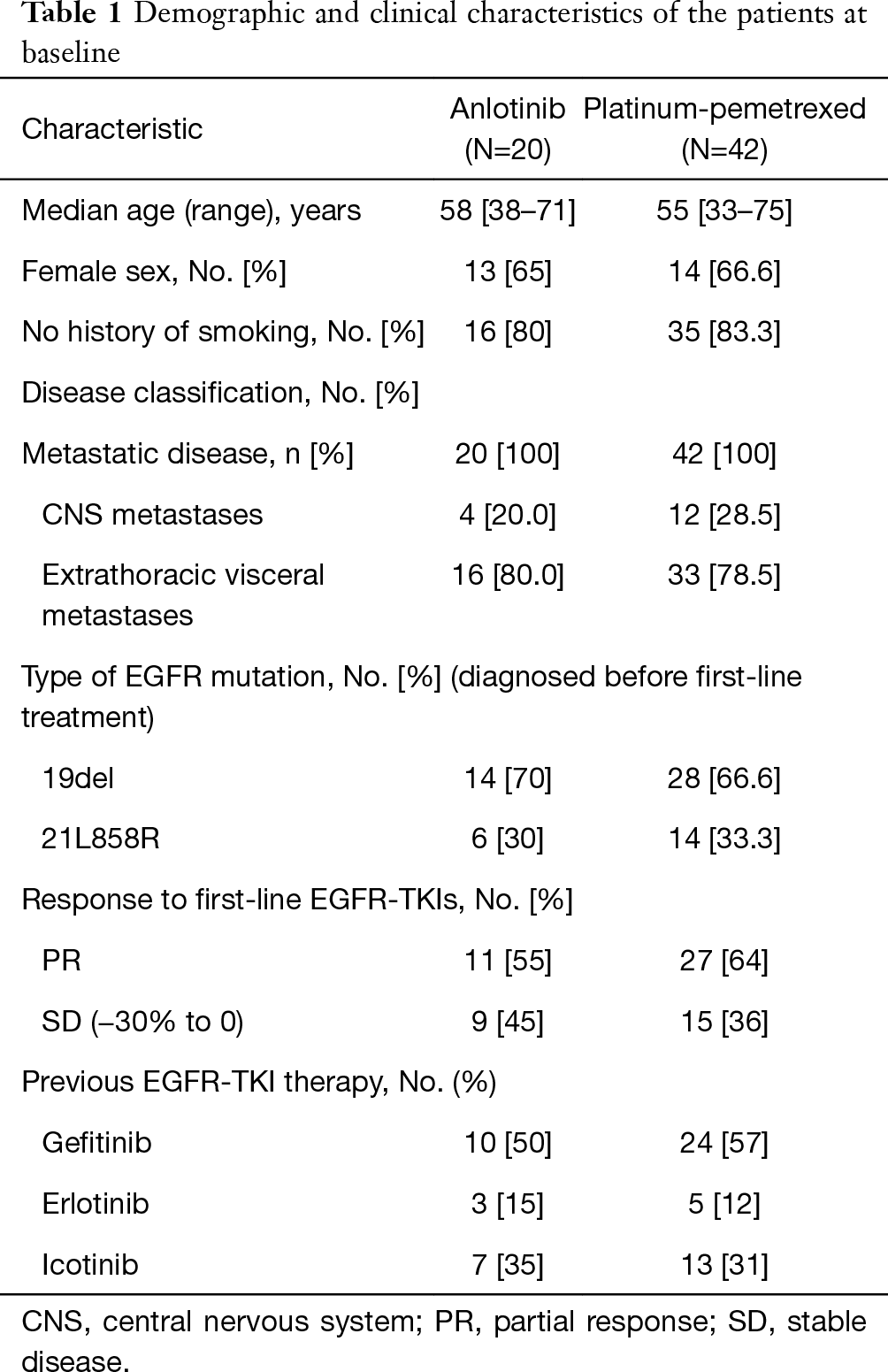 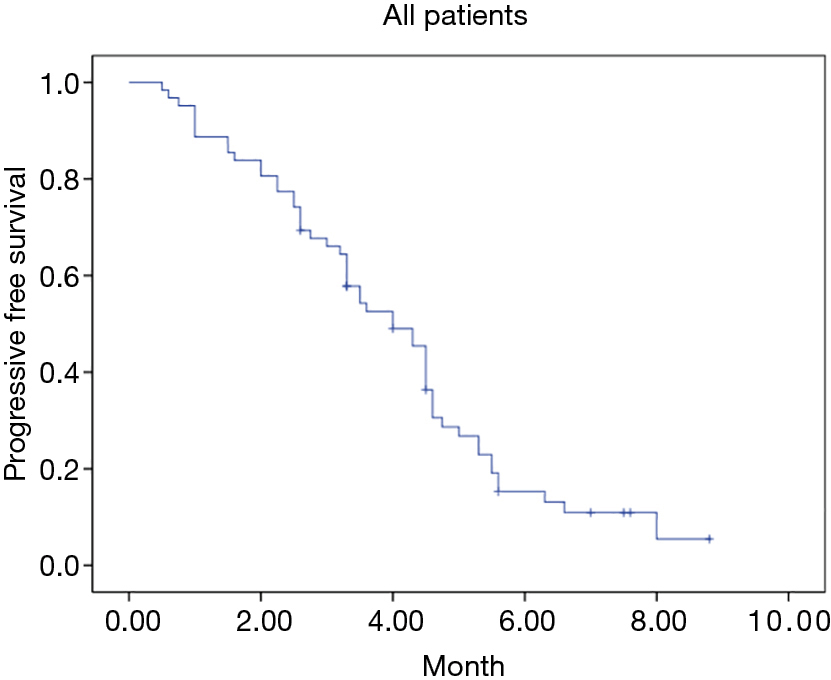 Figure 1 Kaplan-Meier curves of progression-free survival in all patients. 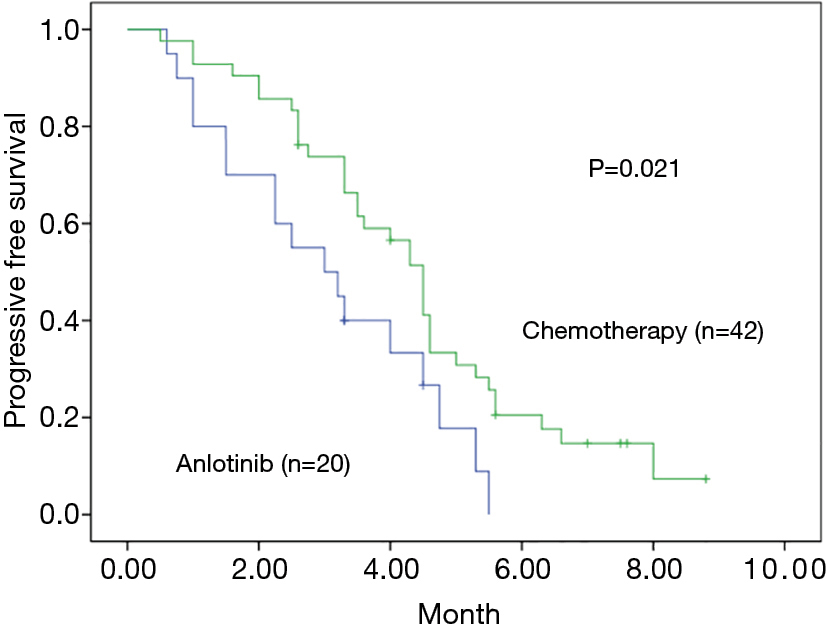 The response to anlotinib therapy included PD (30%), SD (55%), and PR (15%). The response rate was significantly better in the platinum-pemetrexed group (30.9%) than that in the anlotinib group (15%), and the disease control rate (DCR) of both group was 70% and 83%, respectively. Among the patients who responded to, disease progression or death was found in 17 of 20 patients (85%) in the anlotinib group and in 35 of 42 patients (83.3%) in the platinum-pemetrexed group. The overall survival analyses were not completed at the end point. Responses to treatment are shown in Table 2. 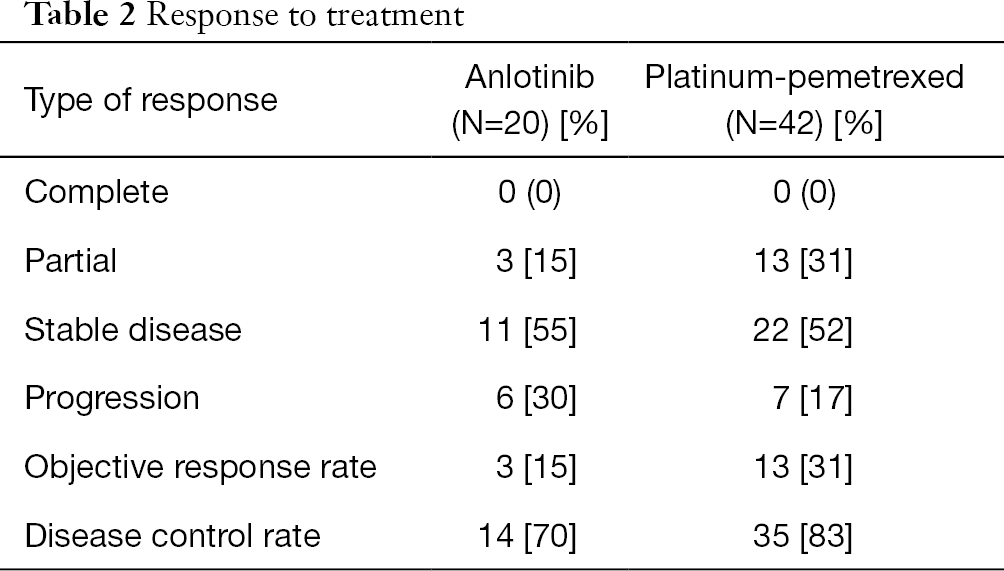 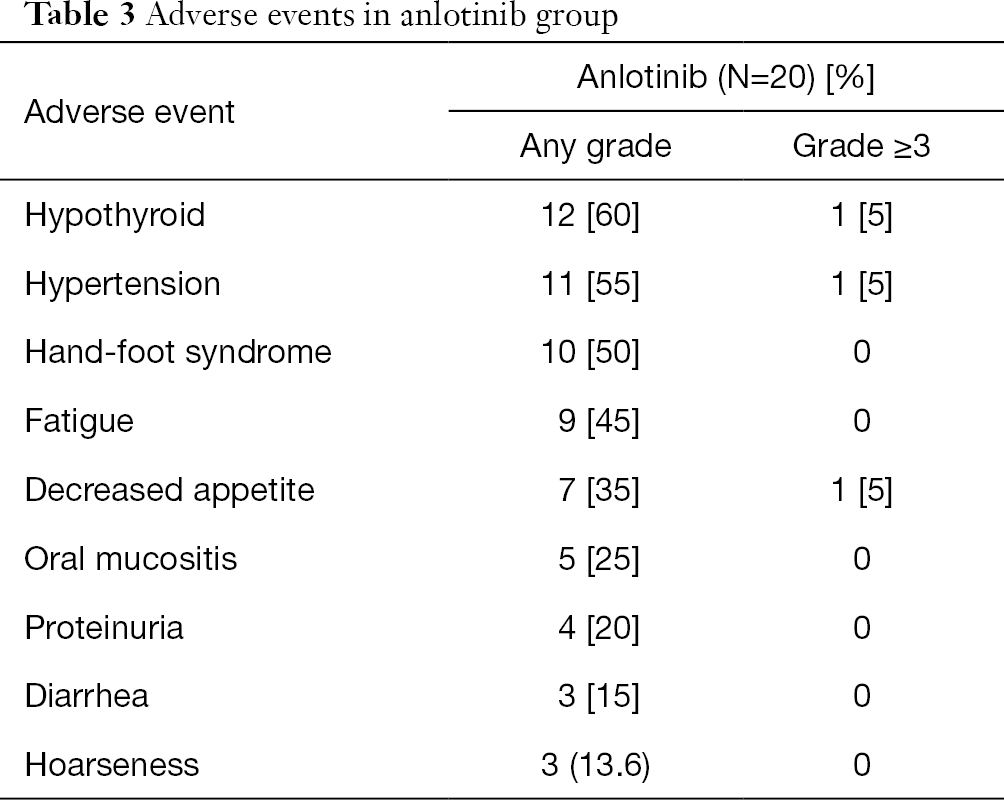 In this retrospective study, we found that stage IV NSCLC patients without the T790M mutation who received anlotinib had worse response rates and a shorter PFS than those who received platinum therapy plus pemetrexed after first-line EGFR-TKIs therapy.

To our best knowledge, in patients with T790M-positive NSCLC after disease progression with first-line EGFR-TKIs therapy, osimertinib was more effective than combination platinum-based chemotherapy (6). For those patients without the T790M mutation, there are some options for disease management. Afatinib-cetuximab has shown approximately a 30% response rate (10). The immune checkpoint inhibitor (ICI)-directed therapy is available but its efficacy in EGFR-mutated lung cancer may be less than that observed in cancers with high mutation load such as tumors associated with heavy smoking history. The effect of PD1/PDL1 inhibitors in EGFR-mutated lung remains controversial. ICIs were less effective for NSCLCs with EGFR mutations than for lung cancers with the wild-type EGFR, and some may suffer from hyperprogressive disease (11). As evidence emerges on immunotherapy, further studies are needed to determine if the combination of ICI and anti-angiogenesis is useful for EGFR T790M-negative NSCLC patients .Currently, platinum-based chemotherapy itself remains a reasonable alternative. The current National Comprehensive Cancer Network guide-lines recommend platinum-based combination therapy for progression after failure of EGFR-TKIs first-line without the T790M mutation. HANSHIN Oncology Group 0109suggested this regimen as a possible platinum-based combination after EGFR-TKI failure (7).

Anlotinib is a novel multi-TKI similar to sorafenib and sunitinib, all of which target tumor angiogenesis and tumor cell growth, invasion, and metastasis. Anlotinib as a third-line or beyond treatment for advanced NSCLC has been approved by NMPA based on the ALTER 0303 trial (9). Anlotinib is also approved in China for the treatment of patients with soft-tissue sarcoma or as a third-line or beyond treatment for extensive-stage small cell lung cancer. The effect of anlotinib as a second-line therapy compared with platinum-based chemotherapy in T790M-negative patients after first-line EGFR-TKIs failure remains unclear. Our retrospective study did not find anlotinib to be superior to the platinum-based chemotherapy. The response rate was significantly better in the platinum-pemetrexed group (30.9%) than that in the anlotinib group (15%). The duration of PFS was significantly longer in the platinum-pemetrexed group than that in the anlotinib group (median, 4.5 vs. 3.0 months). As a third-line or beyond therapy, anlotinib has not shown advantages in terms of chemotherapy compared to being placed in the second-line. In T790M-negative patients after TKIs failed, bypass resistance mechanisms include using alternative cellular pathways and activating downstream signal transduction, which facilitate tumor cell growth and survival. MET, PI3KCA, HER2 gene mutations are most frequently observed (12). So the non-selective use of multi-target TKI, e.g., anlotinib as a second-line treatment may lead to failure.

The toxicity profile of anlotinib was similar to other analogous such as sorafenib, sunitinib, and regorafenib (13-15). In the anlotinib group, no hemoptysis was reported. The most frequent adverse events observed were hypothyroid (60%), hypertension (55%), hand-foot syndrome (50%), fatigue (45%), decreased appetite (35%) and oral mucositis (25%). One patient suffered from hypothyroid of grade 3 which was well controlled by taking levothyroxine sodium. Hypertension, which was well controlled by anti-hypertensive drugs, was the other adverse event with an incidence of 5% of grade 3. Severely decreased appetite was reported in one patient which led to dose reduction to 10 mg daily. Compared to the AEs associated with anlotinib reported in previous studies, no new AEs were observed in the present study (9,16). However, our results show that anlotinib was well tolerated in patients with late-stage NSCLC. All the adverse events appeared to be manageable. The safety profile in the platinum-pemetrexed group was consistent with that observed in the similar cisplatin-pemetrexed study like IMPRESS and AURA 3 trial (6,8). Overall, adverse events tended to be more severe in the platinum-pemetrexed group due to the longer treatment duration.

Our study has several limitations. First, the OS data required longer follow-up. Second, it was a retrospective study and the sample size was small. Third, due to the high false negative rates of the plasma ctDNA T790M test, a biopsy is recommended for patients with plasma T790M-negative results as well as disease progression after receiving first-line EGFR-TKIs. However, the feasibility of detecting the EGFR T790M mutation from plasma ctDNA samples, in line with previous reports (6,17,18).

Unfortunately, we find that as a second-line therapy, anlotinib was inferior to platinum-pemetrexed to patients with T790M-negative after disease progression with first-line EGFR-TKIs therapy. In recent studies, multi-TKI for tumor angiogenesis and tumor cell proliferation with the combination of ICI, could optimize the immunosuppressive tumor-associated macrophages and potentially increase the therapeutic response to immunotherapy both in lung cancer in vivo models and from preliminary clinical data in NSCLC (19). The proper combination may show promising anti-cancer activity than single agent. Abnormal angiogenesis and immunosuppression in the tumor microenvironment are barriers to effective cancer immunotherapy. Antiangiogenesis can have immune modulatory effects. The efficacy of ICI may be enhanced through the addition of antiangiogenesis to reverse VEGF-mediated immunosuppression. The combination of antiangiogenesis and immunotherapies in multiple tumor types have observed promising antitumor effects, inducing greater tumor vascular normalization and converted tumor microenvironment from immunosuppressive to immunosupportive (20). So in the further study, we will try to combine anlotinib plus ICI in T790M-negative patients to determine the antitumor effects.

In conclusion, anlotinib was less effective than platinum-pemetrexed chemotherapy in T790M-negative NSCLC patients with disease progression after failing the first-line EGFR-TKIs therapy.

We would like to thank all of investigators for their involvement in this study.

Reporting Checklist: The authors have completed the STROBE reporting checklist. Available at http://dx.doi.org/10.21037/apm-20-105

Conflicts of Interest: All authors have completed the ICMJE uniform disclosure form (available at http://dx.doi.org/10.21037/apm-20-105). The authors have no conflicts of interest to declare.

Ethical Statement: The authors are accountable for all aspects of the work in ensuring that questions related to the accuracy or integrity of any part of the work are appropriately investigated and resolved. The trial was conducted in accordance with the Declaration of Helsinki (as revised in 2013). The study was explicitly approved by the Ethics Committee of Shanghai Chest Hospital (No. KS1935). Because the study is a retrospective study, and no harm is done to the patient, the requirement for informed consent was waived.