Esophageal cancer, a gastrointestinal cancer, is placed eighth and sixth for incidence and mortality among all types of cancer, respectively (1). The symptoms of early-stage esophageal cancer patients often go undetected, and in moderate patients dysphagia is a typical symptom (2). As a result, the majority of patients are in the middle or late stages of esophageal cancer by the time they are admitted to hospital (3). The extremely high mortality and morbidity of esophageal cancer pose huge medical challenges. In clinical treatment, the most common therapy for patients with esophageal cancer is the combination of cisplatin with 5-fluorouracil, although the therapeutic effects are often unsatisfactory, largely because of multidrug resistance (4). Therefore, the discovery of an effective way to reduce the multidrug resistance of tumors by enhancing the sensitivity of cancer cells to chemotherapeutic drugs has become one of the hot spots in the field of cancer treatment research.

Betulinic acid (BA) is a lupine pentacyclic triterpene compound extracted from white mulberry bark. It is reported to possess a variety of pharmacological properties, with antitumor, antimalarial, antiviral, anti-inflammatory, and antioxidant effects (5-7). Studies have indicated that BA has a strong inhibitory effect on esophageal cancer cells (8), and that it could be used in combination with antitumor drugs to induce tumor cell pyroptosis and inhibit tumor proliferation (9). BA is expected to be used as a synergist in combination with chemotherapy to avoid the development of multidrug resistance and enhance the therapeutic effect of antitumor drugs. Currently, no research has been carried out on the combination of BA and cisplatin to treat esophageal cancer. This study aimed to explore the effects of BA combined with cisplatin on the proliferation, dryability stemness, pyroptosis and growth of esophageal carcinoma cells in a nude mouse xenograft model.

Human esophageal squamous cell lines (TE-11) were obtained from the American Type Culture Collection (ATCC). The cells were cultured in RPMI 1640 medium supplemented with 10% fetal bovine serum and 1% penicillin-streptomycin and incubated at 37 °C in 5% CO2. The medium was changed every 24 h during the cultivation process, and cells were passaged at the rate of 1:2. Cells in the logarithmic growth phase were selected for further experimentation.

Each group of cells was treated with lysis buffer containing protease inhibitor on ice. A BCA kit was used to measure the total protein concentration. An equal amount of protein samples was extracted from each group of cells and denatured at 100 °C for 5 min. Then, proteins were separated by running SDS-PAGE gel and then transferred to PVDF membranes. The membranes were blocked with 5% BSA at room temperature for 1–2 h, before incubation with primary antibody for Ki67, PCNA, SOX2, OCT4, ASC, cleaved Caspase-1 and Caspase-1 at 4 °C overnight. The next day, the membranes were washed, HRP-conjugated secondary antibody was added, and incubation took place at room temperature for 1 h. After washing completely, ECL reagent was added to detect the intensity of chemiluminescence, and the exposure was photographed on a gel imager. Relative protein expression was calculated using ImageJ software, according to the gray value, with GAPDH used as a loading control. The experiments were conducted independently in triplicate.

Twenty male 7–8 weeks old Balb/c nude mice (weight: 20±2 g) were purchased from Beijing Weitong Lihua Animal Technology Co., Ltd. [license number: SCXK (Beijing) 2015-0001]. All of the mice were raised under specific-pathogen-free conditions. The mice were randomly divided into four groups: the control group, the BA group, the cisplatin group, and the BA + cisplatin group. TE-11 cells in the logarithmic growth phase were digested, and the cell concentration was adjusted to 2×107 cells per 0.1 mL. Then, 0.2 mL of the cell suspension was injected into the right armpit of the nude mice. After 15 days, when the tumor reached approximately 1 cm in diameter, the model was indicated to be successful and the follow-up experiments were performed. BA at a dose of 50 mg/kg was intragastrically administered to the BA group. The administration concentration refered to the previous literature (11). The cisplatin group was intraperitoneally injected with cisplatin at 10 mg/kg. The administration concentration refered to the previous literature (12). The BA + cisplatin group mice were intragastrically administered 50 mg/kg of BA and intraperitoneally injected with cisplatin 10 mg/kg. An equal volume of normal saline was performed by intragastrically and intraperitoneally injection for 30 days in Control group.

From day 5 after the model was constructed, the major and minor diameters of the tumors were measured and recorded every 3 days. The formula was: tumor volume = major diameter × minor diameter2 × 1/2.

Data analysis was carried out using SPSS 17.0 software, and the data were expressed as mean ± standard deviation. The statistical significance of difference in vitro and in vivo data was analyzed by t-test. P<0.05 considered to be statistically significant.

The cell viability of TE-11 cells treated with BA at different concentrations was detected by CCK-8. Compared with the 0.5 µM dose treatment, the cell survival rates at the doses of 6, 15, 30, and 50 µM were significantly reduced (P<0.05; Figure 1A). CCK-8 was used to detect the cell survival rates of TE-11 cells treated with cisplatin at different concentrations, and showed that the cell survival rate of the 30, 50, 100, and 200 µM doses was significantly decreased compared with the dose of 1 µM (P<0.05; Figure 1B). To further determine the optimal dosing concentration, the effect of co-administration of Betulinic Acid and Cisplatin on cell viability was examined. As shown in Figure 1C, 3 µM Betulinic Acid and 15 µM Cisplatin were the optimal combination and the combination was used in subsequent experiment.

Figure 2 The protein expression levels of Ki67 and PCNA in TE-11 cells were downregulated by betulinic acid combined with cisplatin. (A) Western blot typical images; (B) relative protein level of Ki67 and PCNA. Compared with the control group, *P<0.05; compared with BA group, #P<0.05. 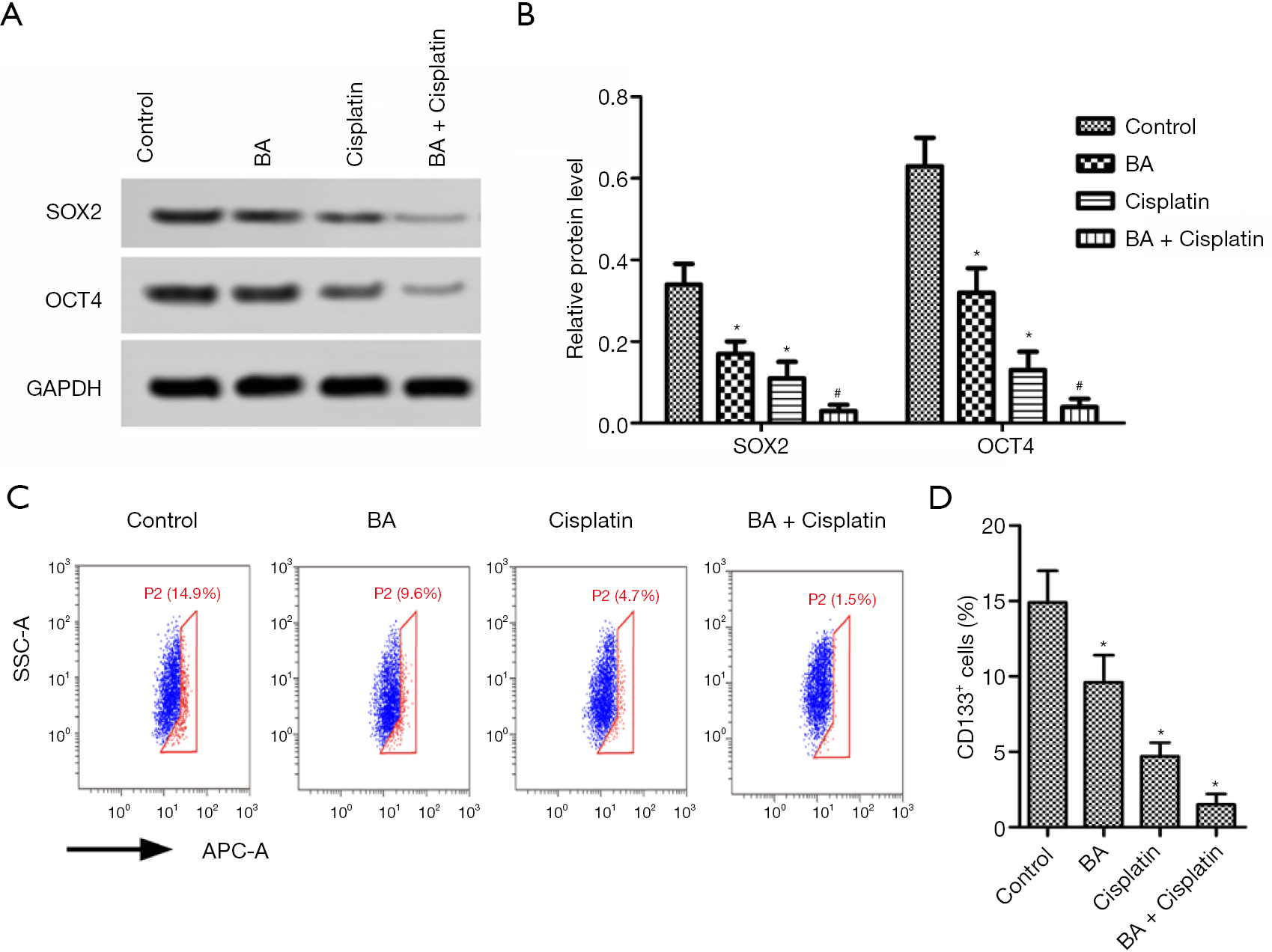 Figure 3 The expression levels of SOX2 and OCT4 in TE-11 cells were downregulated by betulinic acid combined with cisplatin. (A) Western blot typical images; (B) relative protein level of SOX2 and OCT4; (C) flow cytometry for the determination of CD133 activities; (D) percentage of CD133+ cells under four groups. Compared with the control group, *P<0.05; compared with BA group, #P<0.05.

Figure 4 The effects of betulinic acid combined with cisplatin on the expression levels of ASC and Caspase-1 in TE-11 cells. (A) Western blot typical images; (B) relative protein level of ASC and cleaved cas1/cas1. Compared with the control group, *P<0.05; compared with BA group, #P<0.05. 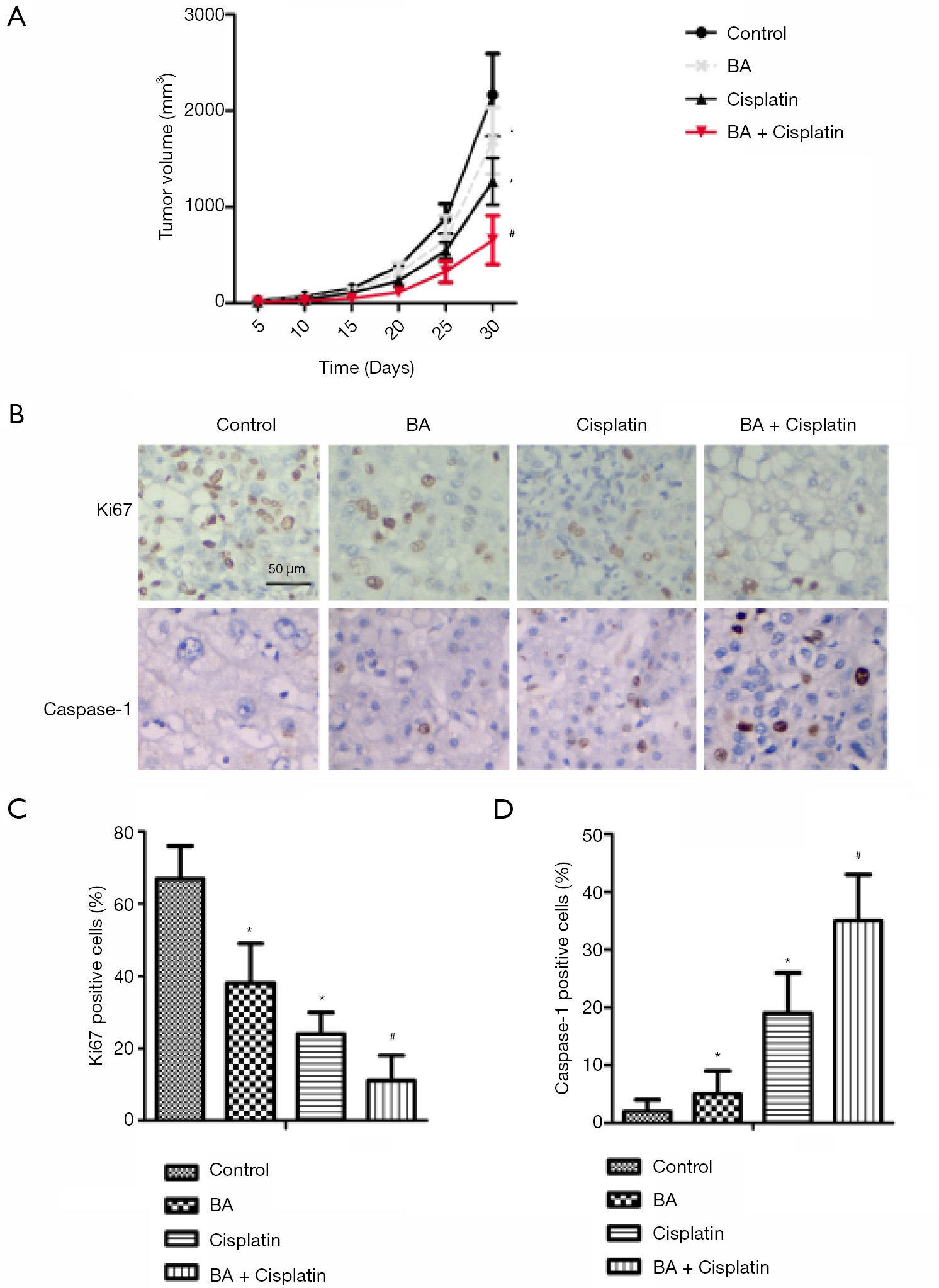 Esophageal cancer is a malignant tumor that carries a high mortality rate and poses a serious threat to the health and lives of patients, most of whom gradually develop resistance to radiotherapy and chemotherapy in the later stage of treatment. Considering the poor efficacy of single drugs in the treatment of esophageal cancer, the combination of two or three drugs is widely used in clinical practice. However, drug treatment often fails eventually, due to the development of drug resistance in tumor cells (13). Therefore, the study of the multidrug resistance mechanism of esophageal cancer and the discovery of effective drugs with low toxicity and side effects bear great significance.

There are some special cell subpopulations in tumor cells which show similar characteristics to stem cells, with the abilities of self-renewal, strong proliferation, and differentiation (18). Tumor stem cells greatly impact tumor invasion, relapse, and metastasis (19). SOX2 and OCT4, as cancer stem cells markers, play a vital role in maintaining stem cell pluripotency and are involved in tumor cell processes, including proliferation, differentiation, invasion, metastasis, drug resistance, and relapse (20). This study showed that BA combined with cisplatin downregulated the expression of SOX2 and OCT4 proteins in TE-11 cells and decreased the percentage of CD133+ cells, which suggests that BA combined with cisplatin can inhibit the stem-like characteristics of TE-11 cells.

Pyroptosis, as a new type of cell death, is widely involved in tumor occurrence and development (21). Decrease of cell death is one of the most important mechanisms in chemotherapy resistance, and so some chemotherapeutic drugs can increase the sensitivity of tumor cells to chemotherapy by inducing pyroptosis (22). The pathogenesis of pyroptosis depends on the formation and activation of typical inflammasomes, which are a multimeric protein complex comprising NLR family proteins, ASC, and Caspase-1 precursors (23). This study found that BA combined with cisplatin could increase the expression of ASC and Caspase-1 protein in TE-11 cells as well as the positive expression rate of Caspase-1 of esophageal carcinoma xenografts in nude mice, which indicates that BA combined with cisplatin can inhibit pyroptosis in TE-11 cells.

In summary, this study revealed the effects of BA combined with cisplatin on TE-11 cells, including the inhibition of cell proliferation, dry-like stemness characteristics, and pyroptosis, which also inhibited tumor formation of esophageal cancer in a nude mouse xenograft model. Therefore, this study provides a new basis for the clinical application of BA combined with cisplatin in the treatment of esophageal cancer.

Funding: This study was supported by the Science and Technology Project of Henan province (No. 192102310103).

Conflicts of Interest: All authors have completed the ICMJE uniform disclosure form (available at http://dx.doi.org/10.21037/apm-20-867). The authors have no conflicts of interest to declare.

Ethical Statement: The authors are accountable for all aspects of the work in ensuring that questions related to the accuracy or integrity of any part of the work are appropriately investigated and resolved. The study was approved by Henan Medical College.