Osteoporosis is a systemic bone disease characterized by low bone mass, destruction of bone microstructure, increased bone fragility, and being prone to fractures (1). Bone mineral density (BMD) has been the most common parameter in the diagnosis of osteoporosis, but it is also affected by some genetic factors. There is evidence showing that genetic factors account for 60–80% of BMD variability (2). Multiple studies have shown that osteoporosis syndrome is a complex polygenic disease which is the result of a combination of genetic and environmental factors (3).

Postmenopausal osteoporosis is a common disease associated with aging and significantly affects the quality of life of postmenopausal women. Diabetic osteoporosis (DOP) is also a clinically concerned disease because of its high prevalence and disability rate (4-6). It has been shown that the bone microenvironment and bone metabolism have changed significantly in the diabetic patients (7,8). These include a large reduction in bone mineral content, a poor balance of bone turnover, a significant reduction in bone density, and other clinical symptoms of osteoporosis (9-11).

Diabetes can affect bone metabolism in a variety of ways (12-14). There is evidence showing that some commonly used glucose-lowering drugs, such as glucagon-like peptide-1 receptor (GLP-1R) agonists, can inhibit the bone resorption and improve the bone formation (15-18). Glucagon-like peptide-1 (GLP-1) is an endogenous peptide hormone and can bind to GLP-1R, exerting glucose-dependent glucose-lowering effects (19).

GLP-1R is encoded by the GLP-1R gene mapped on chromosome 6 (6p21) of human genome (22). The gene polymorphism varies among races and different individuals may have different genotypes. A total of 33 single nucleotide polymorphisms (SNPs) have been identified in the GLP-1Rgene of CHB (Han from Beijing) population in the second phase HapMap data (http://www.hapmap.org).

SNP mainly refers to a DNA sequence polymorphism caused by a single nucleotide variation at the genomic level. To date, no study has been undertaken to investigate the relationship between GLP-1R SNP and osteoporosis in the postmenopausal women. After reviewing literature, eight SNPs of GLP-1R gene (rs3765467, rs1042044, rs2268657, rs6923761, rs2268641, rs2295006, rs4714210 and rs10305420) were detected in the postmenopausal women in Shanghai using the established database and the relationship between GLP-1R SNP and BMD was further assessed. Our findings may provide evidence on the effects of GLP-1 on the osteoporosis and DOP.

The study was approved by the Ethics Committee of the Sixth People's Hospital, Shanghai Jiaotong University [2014-KY-001(K)]. Han Chinese women who were treated in the Department of Osteoporosis and Osteopathy of the Sixth People’s Hospital were included. The inclusion criteria were as follows: (I) women had natural menopause for more than 1 year; (II) women did not receive anti-osteoporotic treatment (except calcium and vitamin D supplement); (III) there was no disease affecting bone metabolism.

Statistical analysis was performed using SPSS version 24.0 (IBM SPSS Statistics 24, USA). The continuous variables with normal distribution are expressed as mean ± standard deviation ( ± SD), and the variables with abnormal distribution as median and interquartile range. The continuous variables were compared with t-test between two groups; the chi-square test was used to compare the categorical variables. Haploview 4.2 was used to calculate the D’ value and linkage disequilibrium coefficient (r2) of the linkage disequilibrium (LD) between SNPs, and the haplotype region and corresponding haplotype were obtained. After adjustment for age, a linear regression model was employed to assess the relationship between GNP-1R SNPs, haplotypes and BMD of different sites in postmenopausal women. A value of P<0.05 was considered statistically significant.

A total of 907 postmenopausal women were included, but some subjects were excluded from this study because the samples were contaminated, had poor quality or were not successfully typed after one failure. Finally, 884 samples from postmenopausal women (mean age: 67.2±10.0 years) were subjected to the detection of SNPs. In addition, subjects were divided into the <60 years group and the ≥60 years group. The baseline characteristics of subjects included for the final analysis are shown in Table 1. 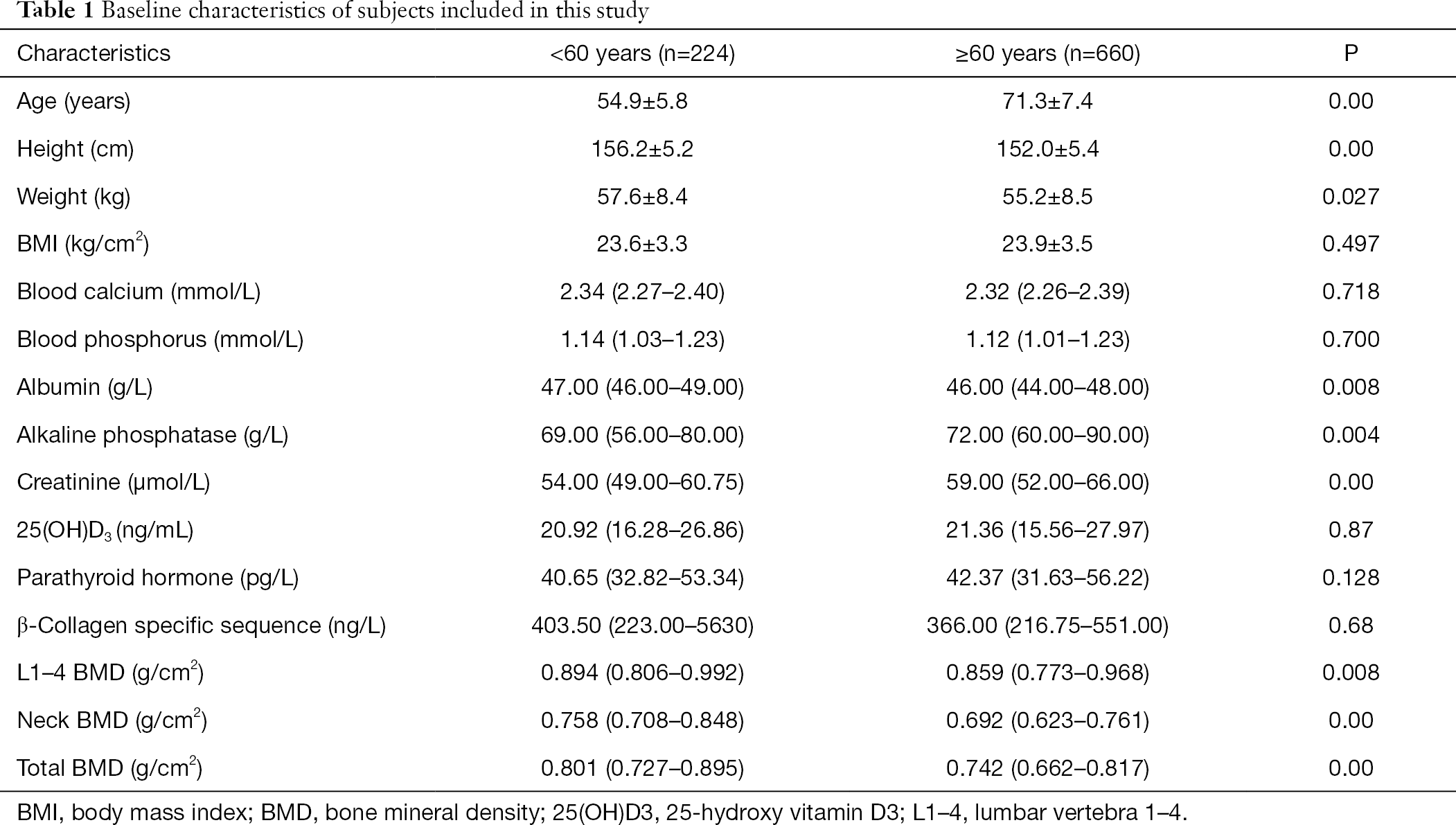 In this study, eight SNPs were genotyped and analyzed. During the test, the detection of rs10305420 failed, and thus the remaining 7 SNPs were examined in which the minimum allele frequency (MAF) was greater than 0.01. The genotype distribution met the Hardy-Weinberg equilibrium, and the MAF of 7 SNPs was similar to the genetic variation of Beijing Han population in China (CHBS) (Table 2).

The relationship between 7 SNPs and BMD was further assessed in postmenopausal women. Results showed there was a correlation between rs2295006 and BMD at specific site (Table 4). The A/A genotype of rs2295006 was negatively related to lumbar vertebrae 1–4 BMD (P<0.05). There is a negative correlation between rs2295006 and BMD of lumbar vertebrae and total hip (Table 5). 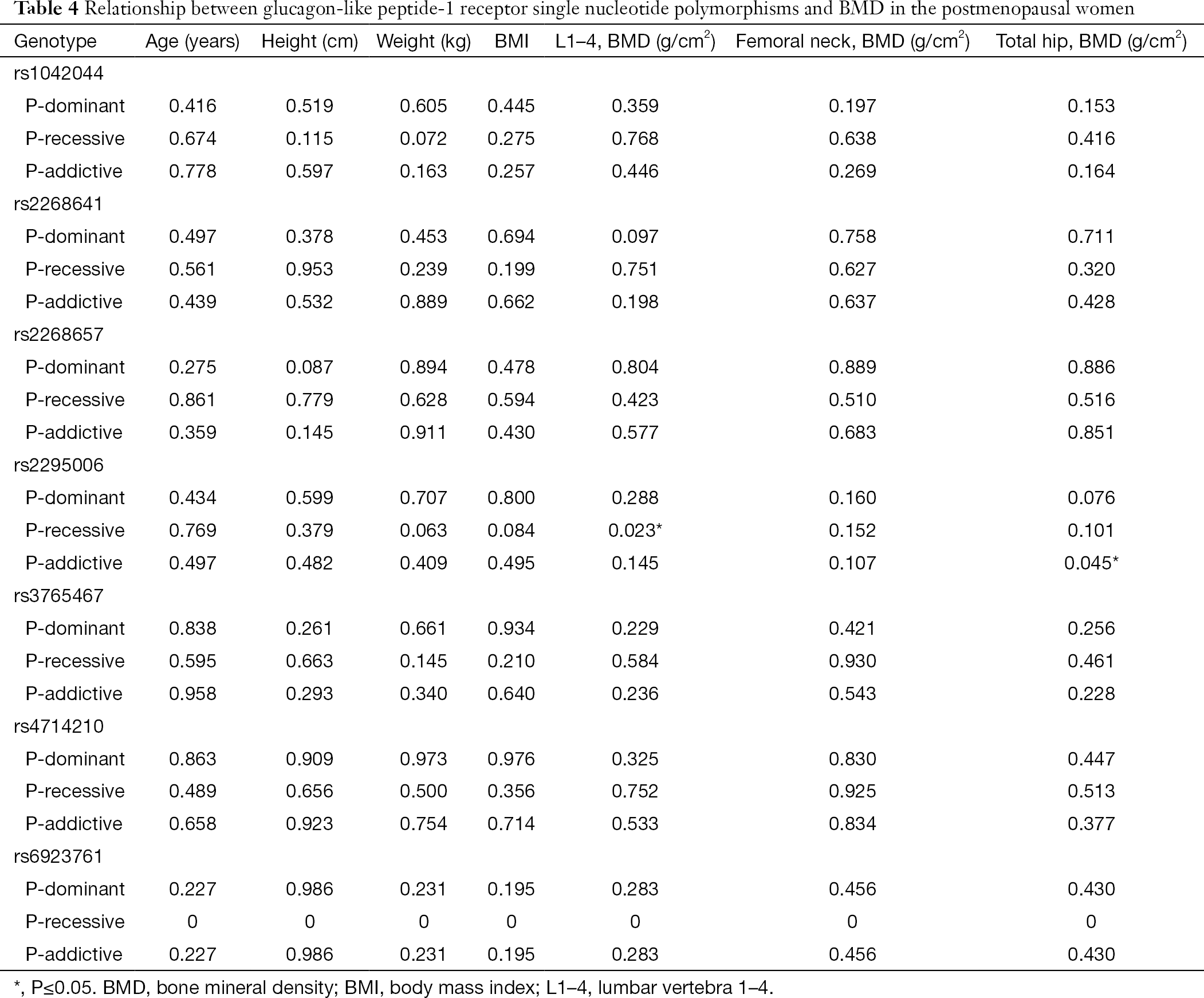 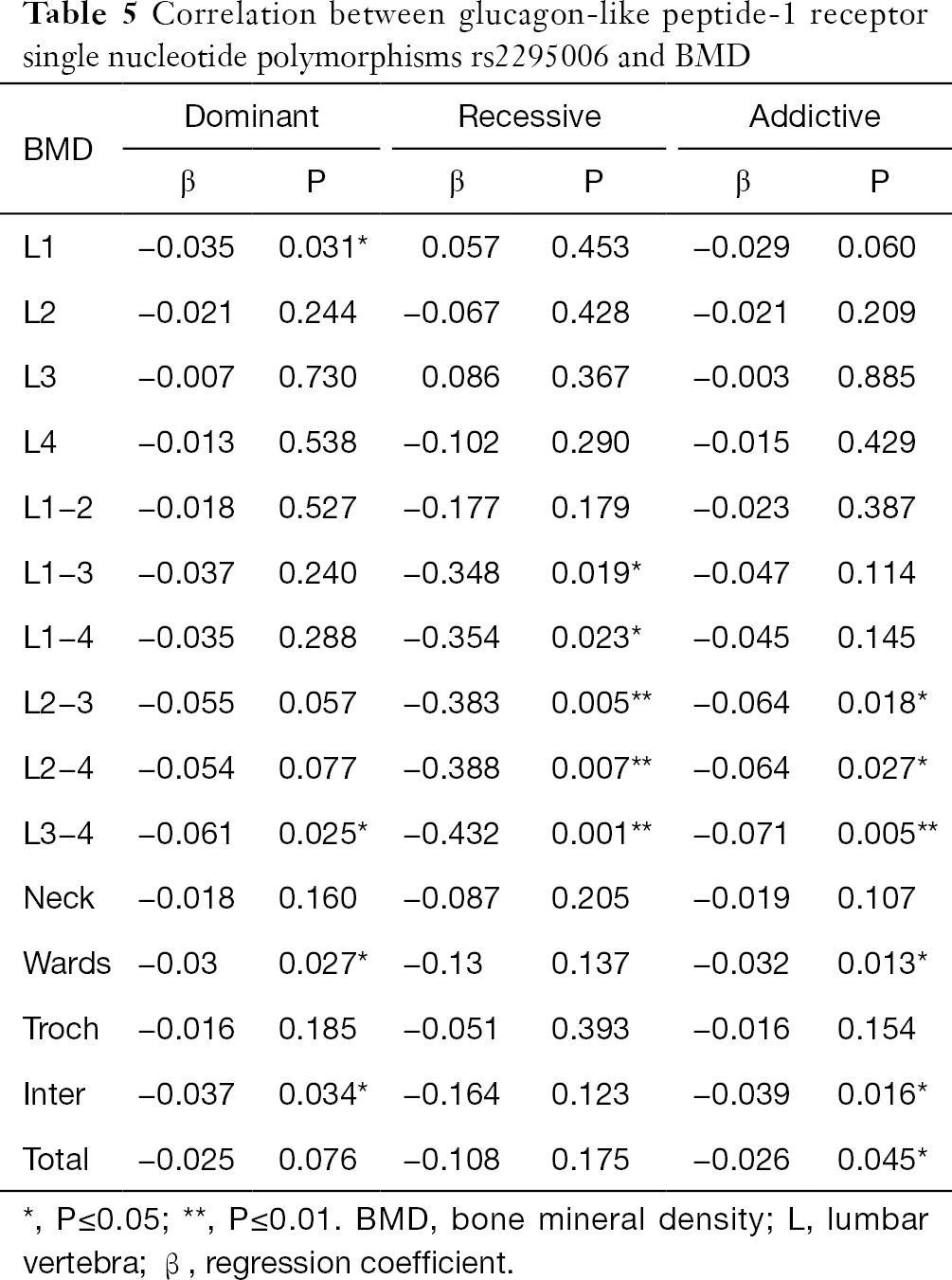 The linear regression analysis was employed to evaluate the correlation between 15 haplotypes and BMD. Results showed haplotypes had no relationships with the age, height, weight and body mass index (BMI) (P>0.05). A close correlation was noted between haplotypes CGAGCCA/CGGGCTA and lumbar vertebrae 1–4 BMD (Table 6). 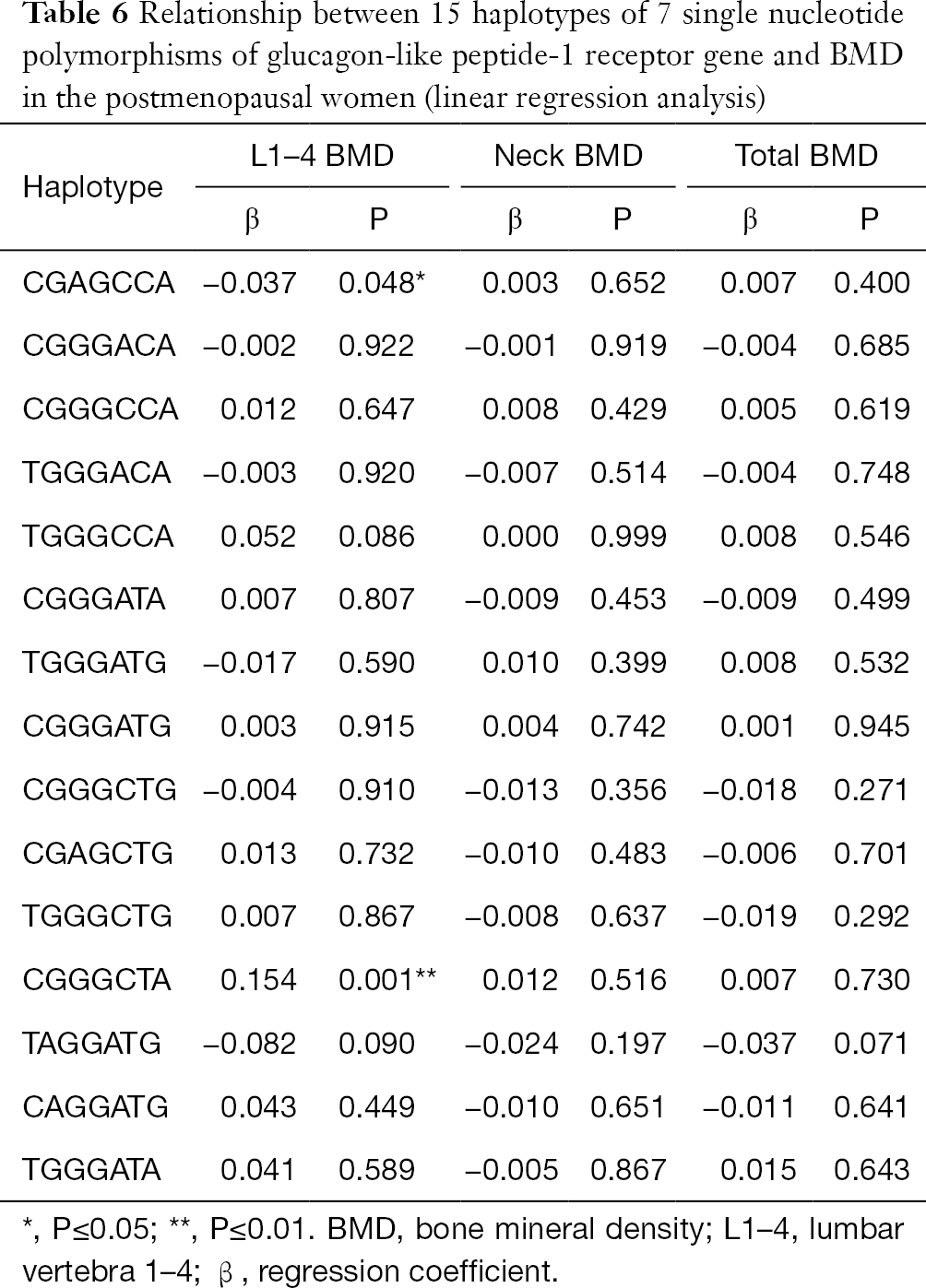 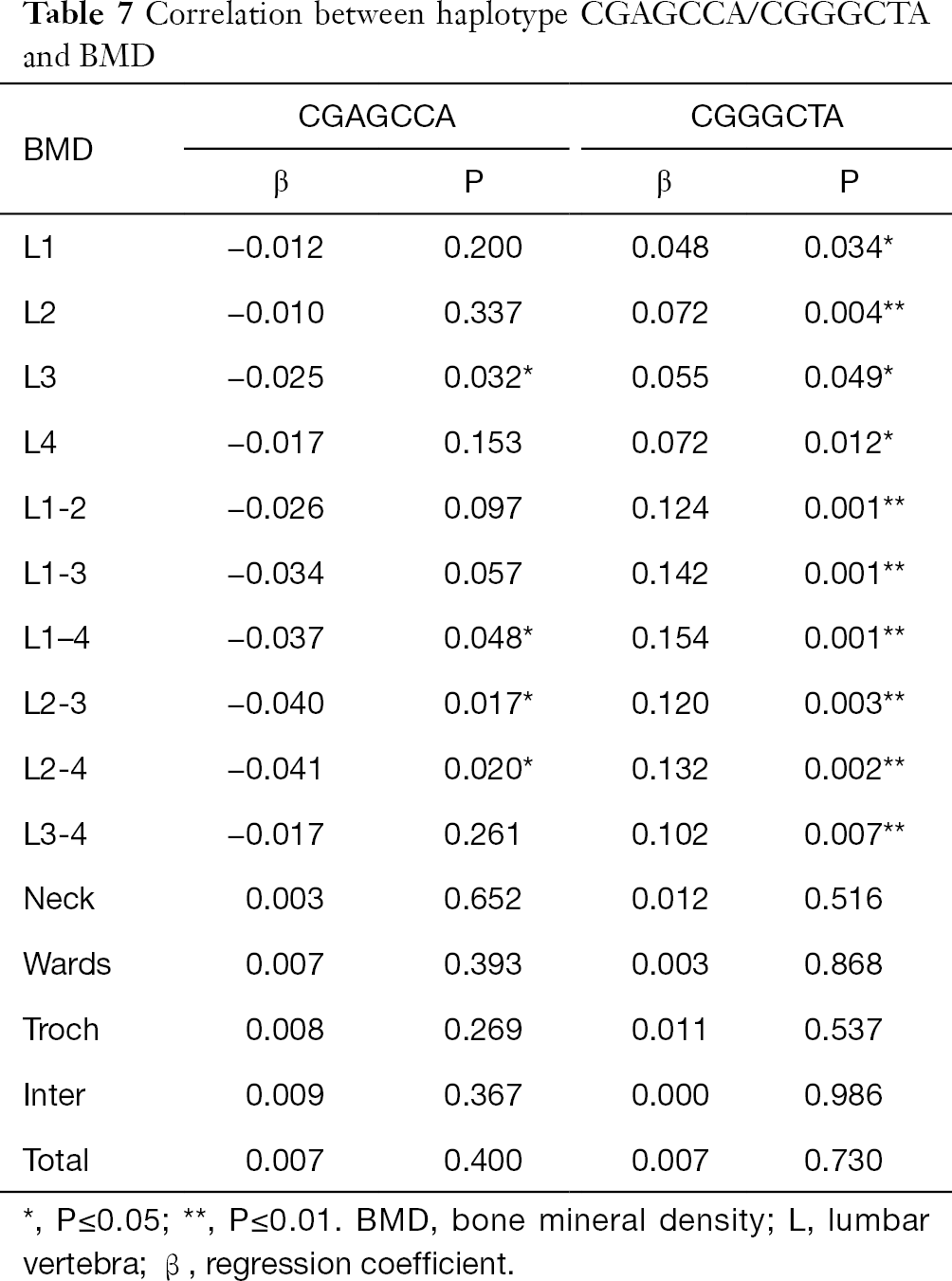 Genome wide association studies (GWAS) have confirmed that BMD is associated with multiple genetically susceptible regions (25,26). The association between vitamin D receptor gene polymorphism and osteoporosis was first reported by Morrison et al. in 1994 (27). Since then, more than 100 genetic polymorphisms have been identified to be associated with bone metabolism regulation, including sex hormones and their receptors, bone matrix component-related proteins and apolipoprotein E (ApoE). These findings suggest the important role of genetic factors in the pathogenesis of primary osteoporosis.

It has been confirmed that the bone resorption experiences a circadian change which may be related to the secretion of incretin after eating (28). Animal studies have revealed that, in case of intake of the same energy and the same compositions of carbohydrate, protein, and fat, the BMD of rats with high frequency of food intake (more than once daily) was significantly higher than that of rats with food intake once daily (29). In addition, patients with long-term total parenteral nutrition (>3 months) often develop bone pain, hypercalciuria and elevated serum alkaline phosphatase (30). Blood calcium, blood phosphorus, 25-hydroxy vitamin D and parathyroid hormone remained normal. These findings were subsequently confirmed by many studies (31). Many investigators have therefore proposed the concept of “entero-osseous axis” (32), which means that bone metabolism may be regulated by incretin.

GLP-1 is a type of incretin, and human bone marrow mesenchymal stem cells can express GLP-1R (33). In the GLP-1R-/- mouse model (16), the risk for osteoporosis increases significantly. In rats with type 2 diabetes mellitus (T2DM) and insulin-resistance (34), subcutaneous injection of GLP-1 enhanced bone synthesis in an insulin independent manner. It is speculated that this enhancement of bone synthesis may be related to the increase in OPG/RANKL ratio. In addition, dyslipidemia has been identified as a major risk factor for osteoporosis-related fractures (35,36). Most patients with osteoporosis will develop hyperlipidemia (20,37). In rats fed with high fat, results showed GLP-1 reversed the reduction of bone mass secondary to hyperlipidemia (21). The above findings suggest that the lack of GLP-1 may adversely affect the bone metabolism, and supplementation with GLP-1 can improve bone metabolism to a certain extent.

To date, only a few studies have investigated the effects of GLP-1R SNPs on the bone metabolism. In a Chinese study (38), the relationship between GLP-1R SNPs and BMD was investigated in 427 male core families. The six SNPs (rs2295006, rs3765468, rs6923761, rs1126476, rs1042044andrs3765467) were detected in this study, and results showed no correlation between genotypes and BMD. However, rs1042044 and rs3765467 are quantitative trait loci for male lean tissue and adipose tissue mutations, respectively. The GLP-1R SNPs were significantly associated with the lean tissue and adipose tissue, suggesting that GLP-1R SNPs may indirectly affect BMD.

It has been reported that many SNPs may not directly induce the expression of disease related genes. However, they are close to certain disease genes and thus may become important markers of some diseases. These SNPs are also known as tag SNPs. The genetically determinant SNPs can affect the phenotype of some diseases and it is necessary to investigate the corresponding functions. In our study, results showed the A/A genotype of rs2295006had a negative correlation with lumbar vertebrae 1–4 BMD. It can be regarded as a tag SNP and a determinant site associated with BMD may be close to it. This determinant site may be positively or negatively related to the BMD. This also suggests that rs2295006 can be used as a tag SNP to study multiple SNPs close to it.

In recent years, some studies have been conducted to investigate the biological effects of GLP-1R SNPs. Some studies have shown GLP-1R SNPs have a positive correlation with T2DM, islet cell function and obesity in different populations (39-42). Ma et al. (39) proposed that, in Han Chinese patients with T2DM, GLP-1R SNPs were associated with the risk of coronary heart disease. The GG genotype of rs4714210 predicted a lower risk of coronary heart disease as compared to the AA genotype (ORa =0.475, CIa =0.232–0.970, pa =0.041), and could also reduce the severity of atherosclerotic lesions (43). Therefore, the GLP-1R SNPs can be used as a predictor of risk for coronary heart disease in T2DM. In a Chinese study, the GLP-1R SNP rs2268657 was found to be associated with T2DM, which is mainly caused by the insufficient insulin secretion (40). In addition, rs3765467 significantly affected the response of islet B cells after infusion of GLP-1 in healthy individuals (41). Therefore, the GLP-1R SNPs may be used to guide the therapeutic use of GLP-1R agonists. In addition, the rs2268641 of GLP-1R gene is associated with obesity in European Americans (42), and the rs6923761 of GLP-1R gene is closely related to the fasting serum GLP-1 level in newly diagnosed T2DM patients (44). Further investigation on obese patients with polycystic ovary syndrome (45) revealed that rs6923761 and rs10305420 of GLP-1R gene are associated with the therapeutic efficacy of GLP-1R agonists.

Recent studies have shown that GLP-1 is able to regulate the bone metabolism (46). In the present cross-sectional study, the correlation between GLP-1R SNPs and BMD was investigated in postmenopausal women. Our results showed A/A genotype and haplotype CGAGCCA of rs2295006 were negatively related to BMD, suggesting that this SNP may negatively regulate bone metabolism. There was a positive correlation between haplotype CGGGCTA and lumbar vertebrae BMD, and this mutation enhanced its positive correlation with BMD. There were several limitations in our study. Only 7SNPs of GLP-1Rwere detected in our study and they could not represent all the GLP-1R SNPs in the postmenopausal women. Thus, the effects of otherGLP-1R SNPs on the BMD in the postmenopausal women cannot be excluded. The sample size is relatively small, and subjects were included from a local region, which limit the expansion of our findings. Thus, more prospective studies with large sample size are needed to confirm our findings.

Conflicts of Interest: All authors have completed the ICMJE uniform disclosure form (available at http://dx.doi.org/10.21037/apm-19-396). The authors have no conflicts of interest to declare.

Ethical Statement: The authors are accountable for all aspects of the work in ensuring that questions related to the accuracy or integrity of any part of the work are appropriately investigated and resolved. The study was approved by the Ethics Committee of the Sixth People's Hospital, Shanghai Jiaotong University [2014-KY-001(K)].