According to the GLOBOCAN 2018 estimates of cancer incidence and mortality, 2.1 million breast cancer female patients were diagnosed and 6.3 hundred thousand person’s death from breast cancer in 185 countries in 2018 (1). Regardless of patients’ characteristics, cancer factors and treatment options, young breast cancer patients were more prone to have cancer metastasis, with a shorter 5-year disease-free survival (DFS) and a higher risk of death (2-9). At present, breast cancer treatment includes surgery, neoadjuvant chemotherapy, adjuvant chemotherapy, endocrine therapy, targeted therapy and other methods. Selective estrogen receptor modulators [SERMs, e.g., tamoxifen (TAM)] and AIs (e.g., exemestane, letrozole, anastrozole) are included in endocrine therapy for hormone receptor positive breast cancer (10-13). TAM has been the main treatment for many years and in recent years it has become clear that ovarian function suppression (OFS) adds benefits to TAM (14) or allows the use of AI. OFS includes three methods: ovariectomy, ovarian radiotherapy and drug castration. Using gonadotropin to release hormone analogues (GnRHa, e.g., goserelin, triptorelin) was a method of castration. For premenopausal patients, goserelin plus TAM or/and chemotherapy were significantly statistical in reducing the risk of recurrence and death compared with the patients used goserelin alone (15). With the release of the outcomes of the combined analysis of the Suppression of Ovarian Function Trial (SOFT) and the Tamoxifen and Exemestane Trial (TEXT) experiments (16), the NCCN guidelines version 1.2019 considered AIs or TAM for 5 years plus OFS for premenopausal women with high-risk factors for recurrence (17). Several studies (16,18,19) showed the debatable results in DFS between the two therapies. The meta-analysis would explain whether the two endocrine therapies have different effects. We present the following article in accordance with the PRISMA reporting checklist (available at http://dx.doi.org/10.21037/apm-20-488A).

This meta-analysis was based on the Preferred Reporting for Systematic Reviews and Meta-Analyses (PRISMA) guidelines (20).

Articles were considered available on account of the title and abstracts. Those eligible articles were retrieved by two investigators. If the following criteria are met, this study will be included in the meta-analysis: (I) the study was randomized controlled trial; (II) included patients were consisted of premenopausal breast cancer patients who had hormone receptor positive; (III) the study had provided data of DFS; and (IV) eligible hazard ratios (HRs) and corresponding 95% confidence intervals (CIs) were provided or calculated by the study data. We will choose the latest articles, if articles are based on the same study. Besides, articles, reviews, and case reports with irrelevance or missing data were excluded.

Quality assessment of the studies

The risk of bias of all included studies was evaluated based on the Cochrane Handbook for Systematic Reviews of Interventions. Two of reviewers evaluated biases including random sequence generation, allocation concealment, blinding of participants and personnel, bling of outcome assessment, incomplete outcome data, selective reporting, and other bias. The risk bias was evaluated on three levels: low risk, high risk, and unclear (21).

We used the Review Manager version 5.3 (The Cochrane Collaboration). Primarily, polled HRs and 95%CIs were computerized by employing the fixed-effect model (22). The statistical heterogeneity of studies was assessed by using Q and I2 statistics. It was considered heterogeneous, if a two-tailed P value of less than 0.10 in Q test (23). Because the small number of studies are included in this meta-analysis, the intensity and sensitivity of Q test were low, so I2 value was also used. I2 values the range data between 0% to 100% (I2=0–25%, no heterogeneity; I2=25–50%, moderate heterogeneity; I2=50–75%, large heterogeneity; and I2=75–100%, extreme heterogeneity) (21). The fixed-effect model will be employed, if heterogeneity exists (I2>50%); conversely, the random-effects model is applied (24). And we will use sensitivity analysis to identify sources of heterogeneity. If P value is less than 0.05, it can be regarded as a statistically significant result.

We found 4,250 articles in PubMed and Embase database search, and found 3 records through other sources. Firstly, 4,226 articles (non-related studies, review articles, case reports, meta-analysis, no data) were excluded based on titles and abstracts. And 24 records were excluded by reading in depth the following reasons: (I) patients (n=4); (II) intervention (n=16); (III) outcome (n=1); (IV) comparison (n=4); (V) same or overlapping data in studies (n=2). Finally, only 3 records with 7,203 patients were included in this study. The literature selection process is presented in a flow chart in Figure 1. 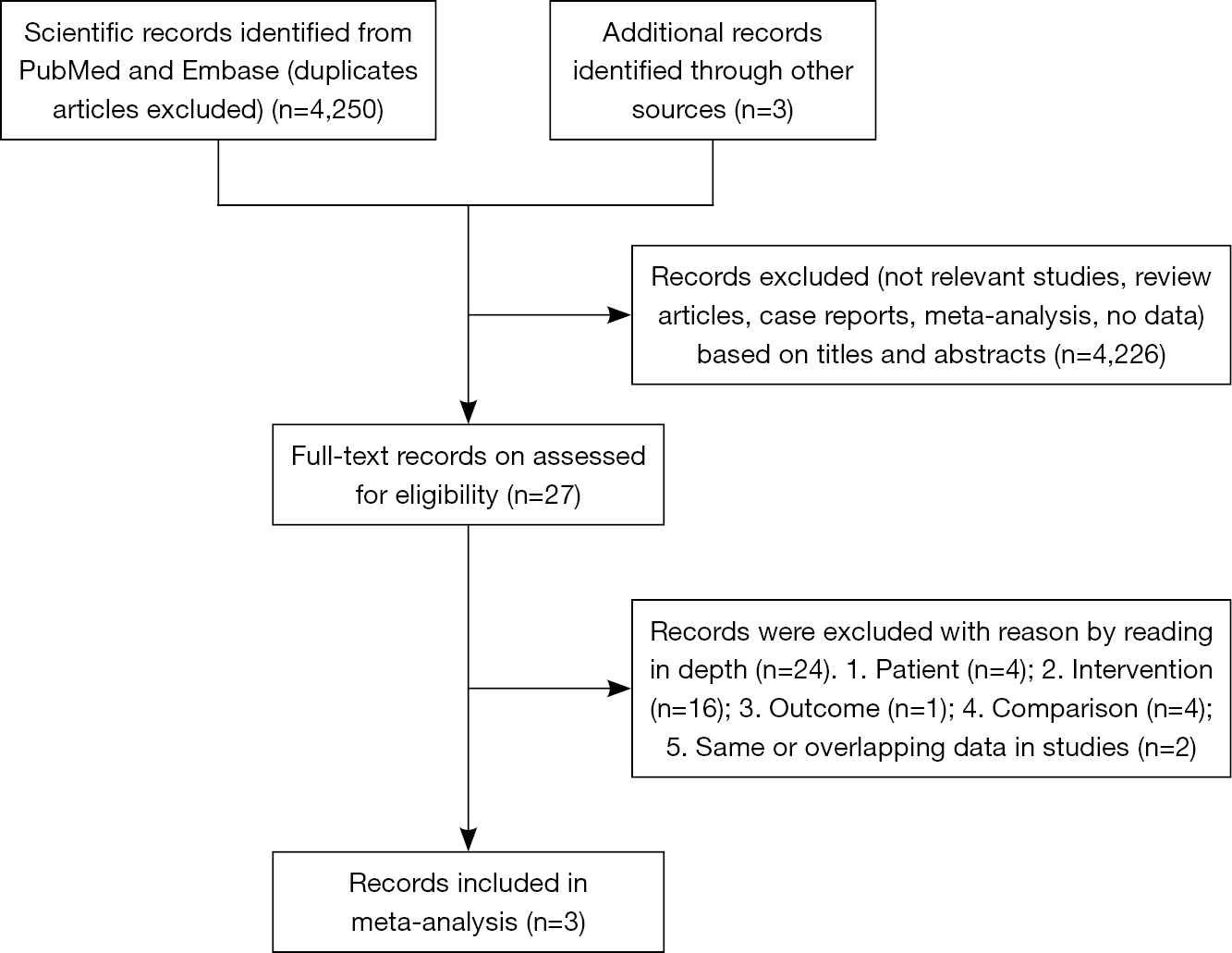 Figure 2 Risk of bias graph according to the Cochrane Handbook for Systematic Reviews of Interventions in the included studies. 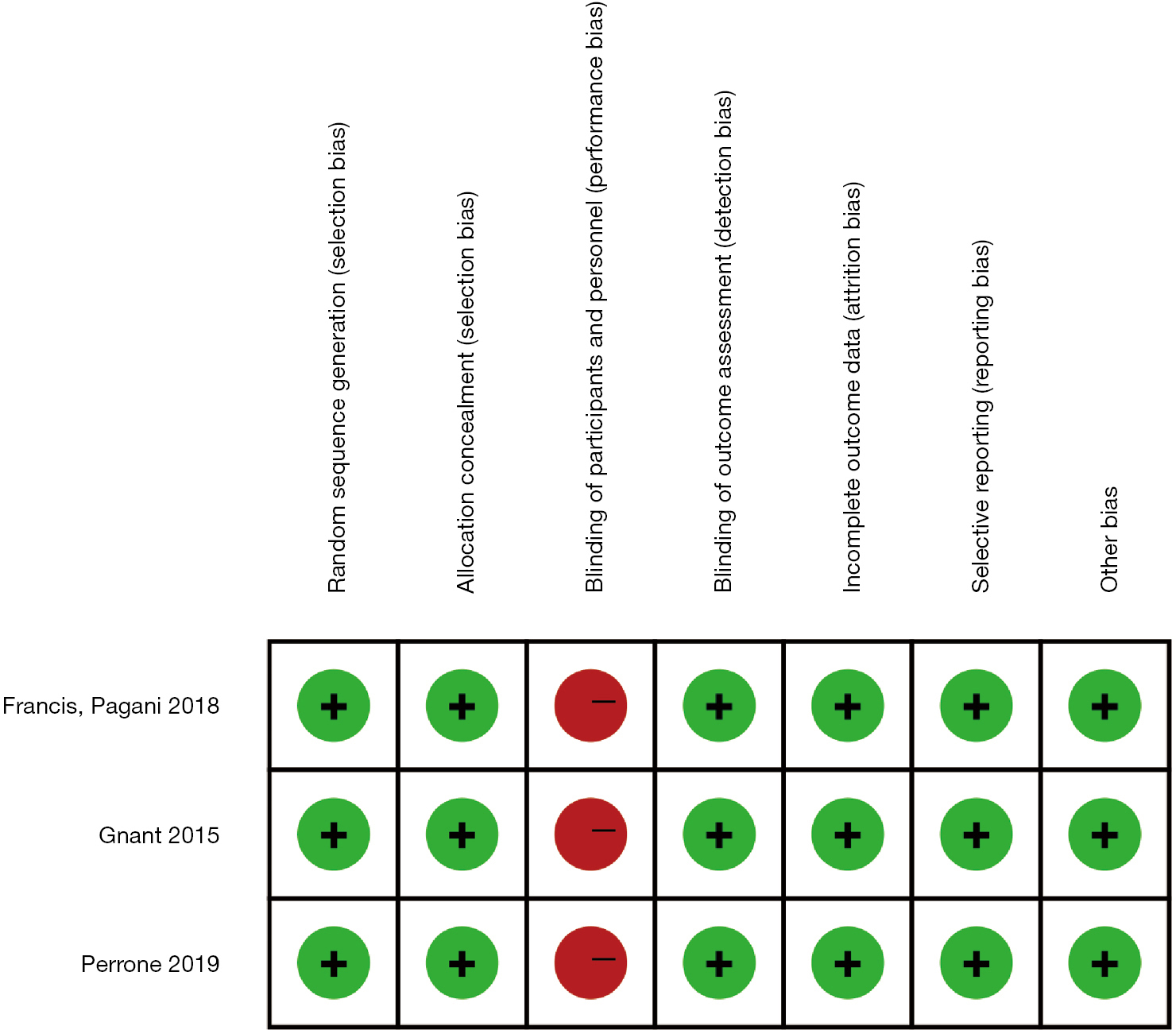 Characteristics of the studies 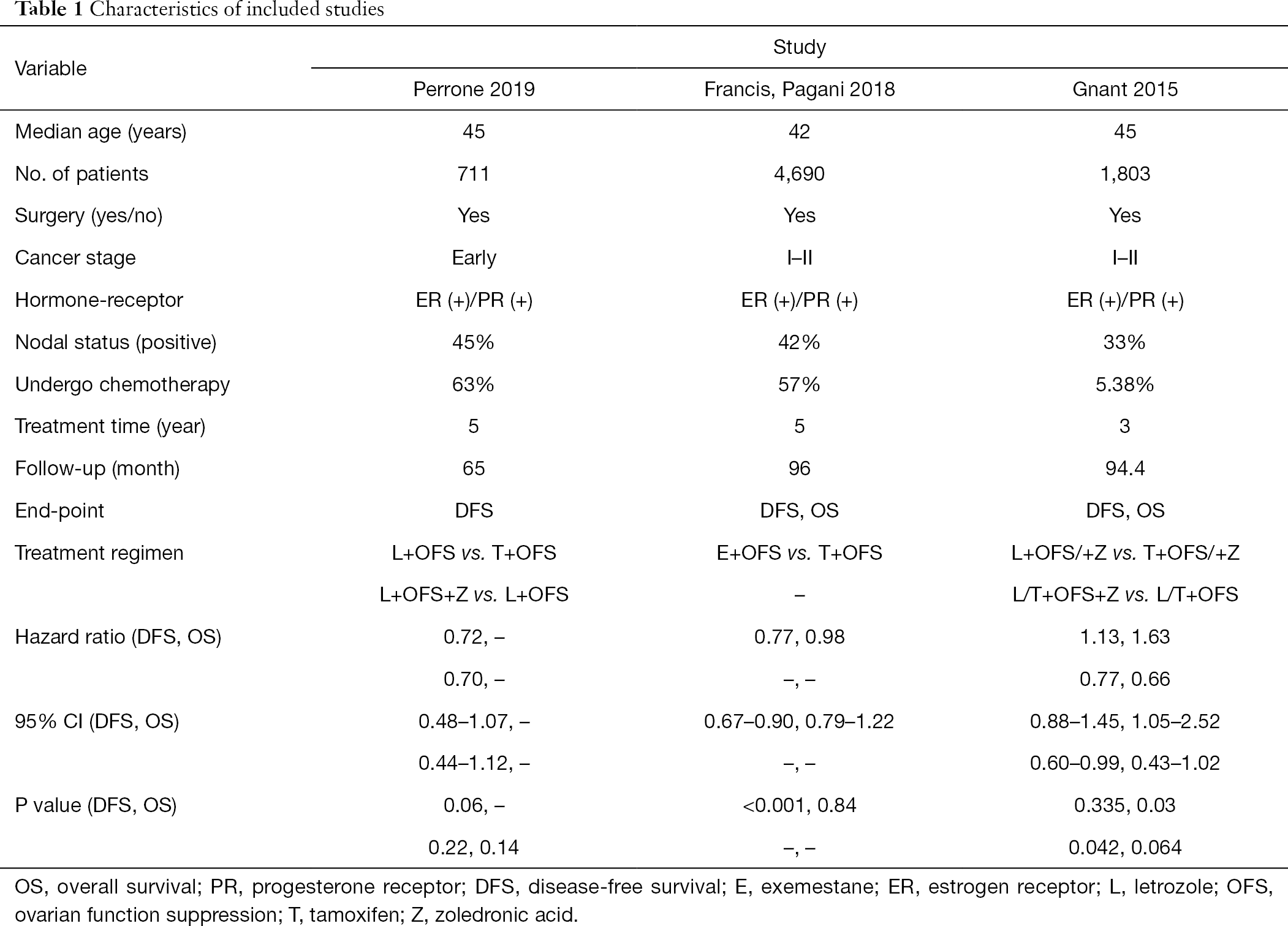 Three RCTs with 7,203 premenopausal breast cancer were included in this meta-analysis.

The results are represented by forest plots in Figure 4. There was statistical heterogeneous in those studies (P=0.03, I2=72%), so the data were calculated by using random-effect model. Pooled HRs shows that there was no significantly statistical difference in OS among women who received OFS plus AIs or TAM (HR =0.87, 95% CI: 0.66–1.14, P=0.30).

Sensitivity analysis showed that one individual study had excessive influence on the results. After we removed this article (ABCSG-12), we conducted data analysis and found that heterogeneity disappeared (P=0.71, I2=0%). The result of two studies indicated that AIs plus OFS could improve DFS, compared with TAM plus OFS (HR =0.77, 95% CI: 0.67–0.88, P=0.0002) in Figure 6.

This is the first meta-analysis to study whether there are differences between TAM plus OFS and AIs plus OFS. The result of three studies indicated that there was not difference between TAM plus OFS and AIs plus OFS in DFS for premenopausal women with early stage breast cancer. And the result of two studies showed that there was not statistical difference between the two endocrine therapies in OS. The statistical heterogeneity was found in this meta-analysis. The designs differences of three trials were the reasons of heterogeneity. In ABCSG-12 trial, patients received endocrine therapy for 3 years (19), it would reduce the effects compared with who received same therapy for 5 years. Furthermore, zoledronic acid played a significant role in improving DFS (27) in this study based on the comprehensive analysis of ABCSG-12 and HOBOE-2 trials. It showed that the combination of zoledronic acid and endocrine therapy was more important than single endocrine therapy (HR =0.75, 95% CI: 0.60–0.94) (18,19). In addition, the ABCSG-12 and HOBOE-2 trials were followed up for less than 8 years (18,19). The results of 10-year follow-up of ATAC study showed that compared with TAM group, AI group showed better results in terms of DFS, recurrence time and distant recurrence time (P=0.04, P=0.001, P=0.03) in both the total study population and hormone receptor positive population (28). And in SOFT trial, AIs plus OFS did not improve DFS when it was followed up for 5 years (29). However, the group of AIs plus OFS had a better outcome of DFS after follow-up duration of 8 years (16). It was found that the group of AIs plus OFS had a better DFS, when the ABCSG-12 was removed. Consequently, it is probable that good results will be found with longer follow-up duration. There was other study that TAM or AI combined with OFS were applied to 204 patients before operation. They were randomly divided into TAM combined with OFS group and AI combined with OFS group. After 24 weeks of follow-up, the complete or partial remission rate of AI combined with OFS group was significantly better than that of the other group (95% CI: 6.5–33.3, P=0.004) (30). May be the endocrine therapy with AIs plus OFS not only bring benefits to postoperative patients, but also improve the complete or partial remission rate of preoperative patients.

This meta-analysis also has some shortcomings. First of all, because the inclusion standard of this study was randomized clinical trials, only three studies were included. Although there were many cases, there were also relatively few research samples. Second, because some studies did not provide enough information, further sub-component analysis could not be conducted, and the influence of patient age, TNM stage, histological grade and other factors on the results could be obtained.

There were no statistical differences between AI plus OFS and TAM plus OFS in DFS and OS for premenopausal women with early stage breast cancer. However, the amount of literature in this meta-analysis was small, so the research needed more evidence to support the conclusion.

Reporting Checklist: The authors have completed the PRISMA reporting checklist. Available at http://dx.doi.org/10.21037/apm-20-488A

Conflicts of Interest: All authors have completed the ICMJE uniform disclosure form (available at http://dx.doi.org/10.21037/apm-20-488A). The authors have no conflicts of interest to declare.