In China, the prevalence of incident AF in subjects aged ≥20 years was 0.2 per 100 people, with an incidence of AF of 0.05 per 100 person-years, overall. Over 11 years, the prevalence of AF increased 20-fold, whereas AF-related stroke increased 13-fold (1-3). Atrial fibrillation (AF) is correlated with some serious adverse cardiovascular events, such as stroke or transient ischemic attack (TIA), heart failure, and even death. Studies also demonstrated that AF decreases the quality of life and increases the risk of dementia or cognitive disability (4). Sinus rhythm recovery and maintenance are thought to be better for AF patients’ prognosis compared with heart rate control alone (5). Radiofrequency catheter ablation (RFCA) has become the main method to acquire sinus rhythm. In recent years, China has entered the era of catheter ablation for AF patients. More and more patients with AF underwent RFCA, cryoballoon ablation, or hot balloon ablation (6). Oral anticoagulant (OAC) can reduce the risk of stroke/TIA in AF patients and is continued after ablation for some days (7). Nevertheless, OAC can also increase the risk of major bleeding, especially cerebral bleeding, which is often vital (8). So, in clinical practice, OAC continuation is often a complicated question faced by both doctors and patients. In this study, we retrospectively analyzed real-world AF patients’ follow-up data in China to summarize the actual status of OAC use after catheter ablation and relevant problems.

Patients underwent RFCA in five centers in China from Nov 2014 to Oct 2017 were enrolled according to inclusion criteria and exclusion criteria. Inclusive criteria: paroxysmal AF, successful RFCA, follow-up as planned, received repeated blood test, and examination at regular follow-up. Exclusive criteria: valvular heart disease, renal insufficiency, malignant tumor, pregnancy. All patients supplied written informed content. The ethics committee approved this study of each center. Patients were divided into two groups: a group of patients who stopped OAC during follow-up (SG) and a group of patients who continued to take OAC during follow-up (CG). Paroxysmal AF refers to AF that ends spontaneously and sustains less than 7 days (6,7,9).

All patients underwent catheter ablation radiofrequency. In these 5 centers, the procedure of catheter ablation was similar and conducted according to guidelines (4,5) and all patients signed informed content. In short, amiodarone was stopped for at least 1 week before ablation, and other anti-arrhythmia drugs were stopped for at least five half-life periods. Transesophageal echocardiography was used to detect thrombosis in the left atrium before ablation. After local anesthesia with 1% lidocaine, 8.5 F sheath was implanted into the right femoral vein, and 6 F sheath was implanted into the left femoral vein. The mapping electrode was implanted into the coronary sinus through 6 F sheath. After atrial septum was punctured, a saline catheter (Thermo Cool Smart Touch, Biosense-Webster Inc., Diamond Bar, CA, USA) was moved into the left atrium. The radiofrequency ablation and 3-D model was conducted under the Three-Dimensional system (CARTO3, Biosense-Webster, Diamond Bar, CA, USA) guiding. Continuous circumferential ablation around the ipsilateral pulmonary vein cavity was performed to isolate all pulmonary veins completely.

All patients were followed up regularly at 1, 3, and 12 months after the RFCA procedure. Twelve months after the RFCA procedure, patients were followed up annually. All follow-ups were conducted at each center’s outpatient clinic. At 3 months follow-up, some patients’ medication therapy was adjusted according to their condition and doctors’ experience or guideline.

Continuous variables were expressed as the mean ± standard deviation (SD) and compared using an unpaired two-sided Student’s t-test when normal distribution and equal dispersion were confirmed. The Mann-Whitney U test and the Wilcoxon’s signed-rank test were used when the variance was unequal. Categorical variables were expressed as percentages (%) and compared using χ2 analysis or Fisher’s exact test if necessary. Freedom from adverse events at follow-up was analyzed by Kaplan-Meier survival curves and compared by the log-rank test. A P value of less than 0.05 was considered statistically significant. All statistical analyses were performed with SPSS (version 17.0 for Windows, SPSS, Inc., Chicago, IL, USA). 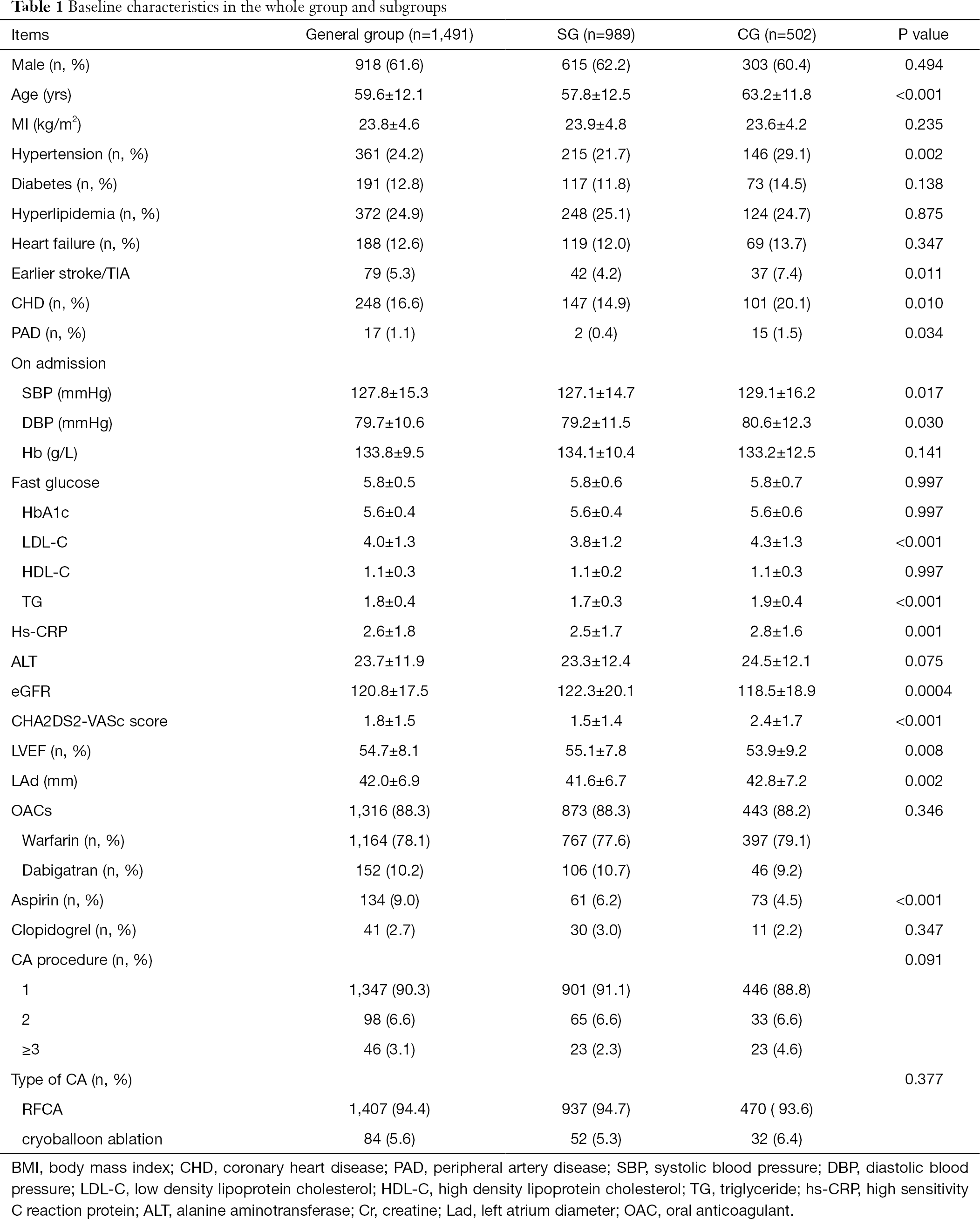 Follow-up outcomes in SG and CG 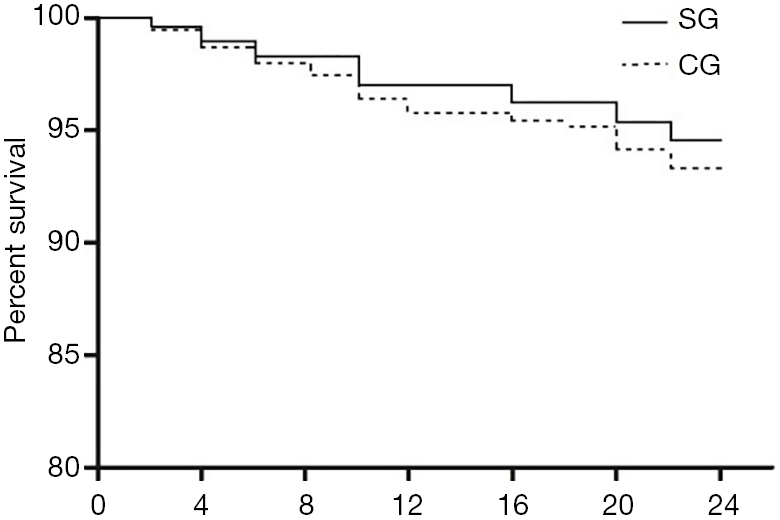 With the rapid progress of RFCA for AF patients in recent years, the number of AF patients who underwent RFCA increased significantly in China (8). Successful RFCA leads to the recovery of sinus rhythm, which has a better prognosis than heart rate control alone (10). However, whether post-ablation anticoagulant therapy is necessary or not is still controversial (11). Most guidelines or consensus suggest that patients at high risk of thrombosis events prior to RFCA procedure, i.e., CH2ADS2-VASc score over 2, should continue to take OAC after RFCA procedure for a long time or even lifelongKL. This strategy reduces the incidence of ischemic vascular events while increases the risk of minor and major bleeding, which is often life-threatening. So, in clinical practice, what is the fact about OAC therapy after the RFCA procedure, especially in China? Our present study partly answered this question.

By retrospective analysis of data involving 1,491 paroxysmal AF patients from five centers in China, we found that over two-thirds (66.3%) of patients stopped OAC either on doctors’ prescriptions or on their own decision. This rate was higher than those in another study (12,13). In their study, Okumura et al. reported 1,836 (53%) patients discontinued OAC therapy during a 20.7-month follow-up period (12). They found that patients who stopped OAC therapy were mainly younger, male, paroxysmal AF, only a single AF session, absence of comorbidities, a smaller left atrium diameter (Lad), etc. We found that most patients who stopped OAC had a lower risk of stroke/TIA and similar prognosis compared with those continued to take OAC. In those who stopped OAC, some patients followed doctors’ prescriptions, others decided by themselves. Doctors’ decisions on discontinuation of OAC were made according to guidelines or consensus or their own experience and even the fear of bleeding.

Guidelines or expert’s consensus of nowadays is based on evidence derived from researches conducted out of China, especially mainland (14,15). Therefore, there possibly exists a racial difference between patients from China and patients from other countries especially from Europe and America. With this consideration, Chinese doctors are often reluctant to prescribe OAC to patients after a successful RFCA procedure. In fact, in our study, the success rate of paroxysmal AF catheter ablation was 89%, which should cause the doctor’s decision on discontinuation of oral anticoagulation. In specific, the main OAC used in China is warfarin which needs intensive monitoring international normalized ratio (INR) which is not convenient for most patients and patients’ compliance is poor (16,17).

Moreover, the reaction to warfarin differs significantly among Chinese patients (18). The same dose may not enough for one patient, but too much for another patient. As a result of all these reasons, warfarin is under-used in Chinese patients (19,20). On the other hand, some patients were administrated with warfarin at a lower dosage without reaching the target INR, as described before (21).

Another reason may be the under-use of OAC, especially warfarin. In this study, we found 3-fold of patients who were administrated with warfarin had not reached the target INR during follow-up, and the reason for this phenomenon was described before. Some research suggested that RFCA could reduce the risk of cognition impairment or dementia (24,25). RFCA procedure was related to SCI, and SCI was believed to be a risk factor of cognition impairment or dementia (9,26,27). Theoretically, OAC can reduce the incidence of SCI, especially in patients with high risk (28). However, in those patients with continued OAC therapy, the incidence of SCI was a little high. The underlying reason for this is similar to the question mentioned above.

The incidence of major bleeding in patients who stopped OAC was significantly lower than that in patients who did not have bleeding with some patients who had not reached the INR target. Based on these conflicting facts, we suggest that further research should focus on how to precisely recognize the real patients at elevated risk of stroke, whether ischemic or hemorrhagic. For example, further study could investigate OAC therapy in patients with specific CHA2DS2-VASc scores, and especially the average score of 2–3. Alternatively, new techniques should be applied in precision medicine for this kind of patients.

In our study, we did not find the difference of death between two subgroups. The possible reason includes: the duration of follow-up was not long enough; the sample size was not big enough, and there was indeed no difference in mortality exist between two subgroups. Further study should also enroll more patients from more centers and follow up longer to figure out the real status of post-ablation anticoagulation and its influence on the prognosis of patients with paroxysmal AF.

Conflicts of Interest: All authors have completed the ICMJE uniform disclosure form (available at http://dx.doi.org/10.21037/apm-20-565). The authors have no conflicts of interest to declare.