Comparison of clinicopathological features and prognosis between IgA nephropathy and purpura nephritis in adults with diffuse endocapillary proliferation: a single-center cohort study

Immunoglobulin A nephropathy (IgAN) is one of the most common types of glomerulonephritis, especially in the East Asia (1). In China, the proportion of IgAN in primary glomerular diseases has risen to 52.66% (2). Henoch-Schönlein purpura, in contrast, is considered as systemic small vessel vasculitis, and 70–80% of adult patients with Henoch-Schönlein purpura have developed nephritis with mesangial IgA deposits (3,4). In China, HSPN has been the second-most common secondary glomerular diseases (2).

Both HSPN and IgAN have concomitant mesangial IgA deposits on pathology, suggesting that they share pathogenic mechanisms. The histological and immunofluorescent features are hard to distinguish between HSPN and IgAN (5). Several studies have revealed the differences in the clinical manifestations and outcomes between IgAN and HSPN (6,7), which may be attributed to the mismatched age distribution and different prescriptions of steroids or other immunosuppressive drugs (8). Whether they are related is still under controversy.

It has been reported that adults have a higher incidence of IgAN, but the incidence of HSPN is relative low in adults. Therefore, fewer clinical studies have reported the renal outcomes in adult HSPN patients than in IgAN patients. Besides, the clinical manifestations of HSPN have not yet been fully elucidated in studies with large sample size, especially the HSPN of some special types.

Diffuse endocapillary proliferation (DEP), which involves ≥50% of all the glomeruli and ≥50% of the glomerular tuft is different from E1 (only endocapillary proliferation); DEP is rather frequent finding in the acute phase of poststreptococcal infection. However, it is rarely observed in both IgAN and HSPN, and the incidence is about 5% in IgAN and 2.17–4.05% in HSPN (13,14), and most of cases are reported in children. The present study aimed to clarify the differences and relationship in the clinicopathological features and outcomes between DEP-IgAN and DEP-HSPN.

From January 2001 to April 2018, 2,689 adults were diagnosed with IgAN and 272 with HSPN in our renal center. Among them, 12 were diagnosed with DEP-IgAN (DEP-IgAN group) and 10 with DEP-HSPN (DEP-HSPN group) were enrolled into present study. The DEP was diagnosed when endocapillary hypercellularity involves ≥50% of all the glomeruli and the lesion involves ≥50% of the glomerular tuft. In addition, 24 IgAN patients without DEP (NDEP-IgAN group) and matched 20 HSPN patients without DEP (NDEP-HSPN group) were recruited. There were no marked differences in the baseline characteristics such as age, sex, and Oxford classification scores (M, S, T and C). Patients in both NDEP-IgAN group and NDEP-HSPN group had complete clinical and pathological data (Figure 1).

The study was conducted according to the Declaration of Helsinki and approved by the Institutional Review Board of Hangzhou Hospital of Traditional Chinese medicine (No. H-1002-032-309). The informed consent was waived since the study did not infringe on patient privacy or health status.

After renal biopsy, all the renal samples were evaluated and graded by two nephrologists according to the Oxford classification. In addition, for each histologic lesion, the degree of global glomerular sclerosis (GS), crescent ratio (CC), interstitial infiltration, renal vascular lesion (wall thickening and hyaline change) (0–3 or 0–4) were classified by using the Haas and Katafuchi system (16). The presence of endothelial swelling was also assessed.

Renin-angiotensin system (RAS) blockers were used in patients with hypertension or urinary protein-to-creatinine ratio ≥0.5 mg/d. Steroid treatment (prednisone 0.8–1.0 mg/kg/day) was initiated in patients with persistent proteinuria >3.0 g/d, unresponsive to RAS blockers or with evidence of severe active inflammation. Other immunosuppressive drugs, like cyclophosphamide and mycophenolate mofetil, were added when incomplete response or intolerance of steroid was present. Besides, for HSPN patients, steroid was also administered when there were evident systemic manifestations of vasculitis, even in the absence of proteinuria.

All statistical analyses were performed with SPSS version 23.0. Case control matching was conducted using the SAS system. Nonparametric variables are expressed as medians and interquartile ranges (IQRs) and compared with the Kruskal-Wallis test. Categorical variables are expressed as percentages and compared with the Pearson’s Chi-square test or Fisher’s exact test. Kaplan-Meier survival curves were used to analyze renal survival from the time of biopsy to the presence of endpoints. A value of P<0.05 was considered statistically significant.

The baseline clinical characteristics are shown in Table 1. Results showed there were no marked differences in the median age at diagnosis, gender and course of disease between DEP-IgAN group and DEP-HSPN group. The age in both DEP-IgAN group and DEP-HSPN group displayed a bimodal-like distribution, and most of patients were younger than 30 years or older than 60 years (Figure 2). 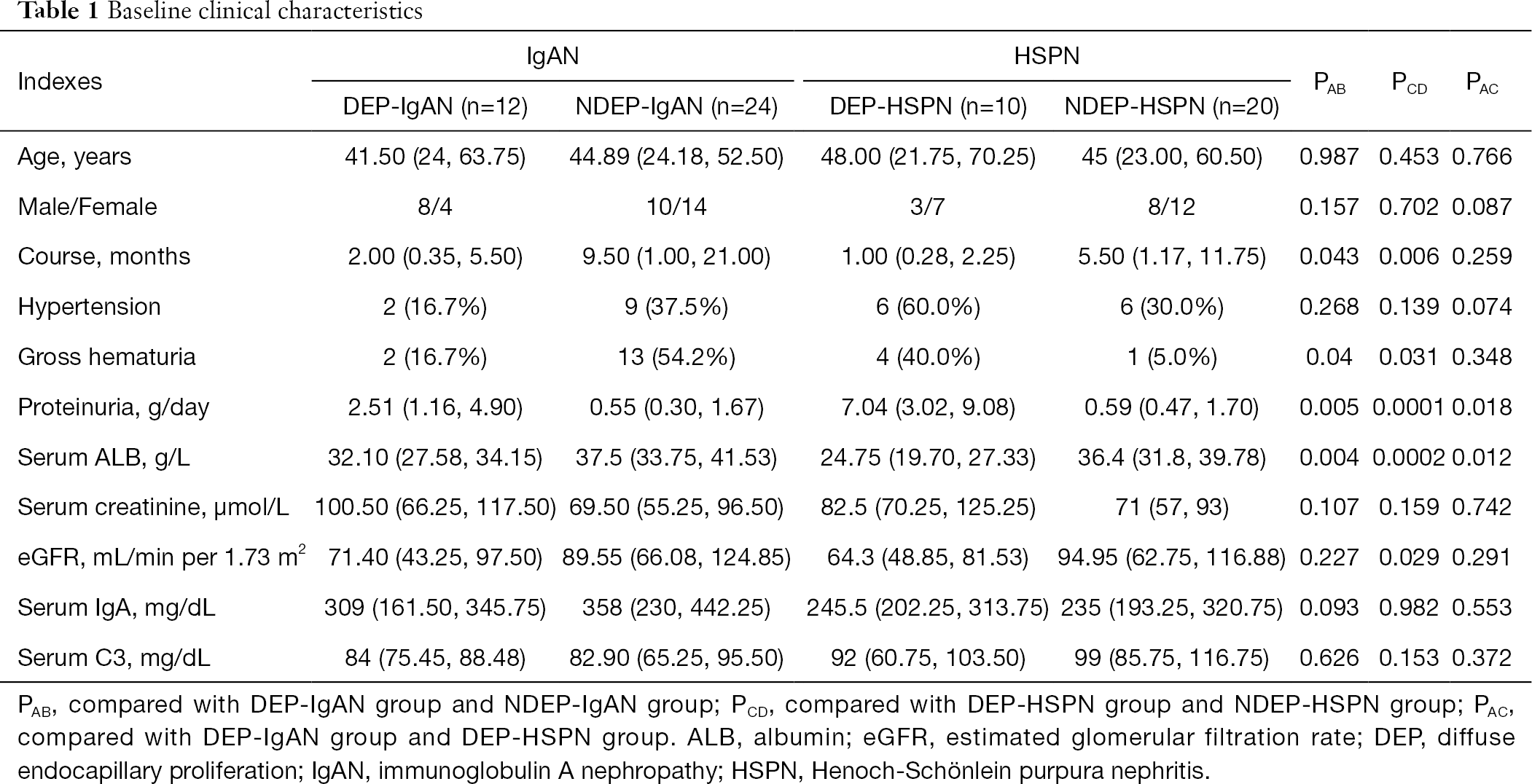 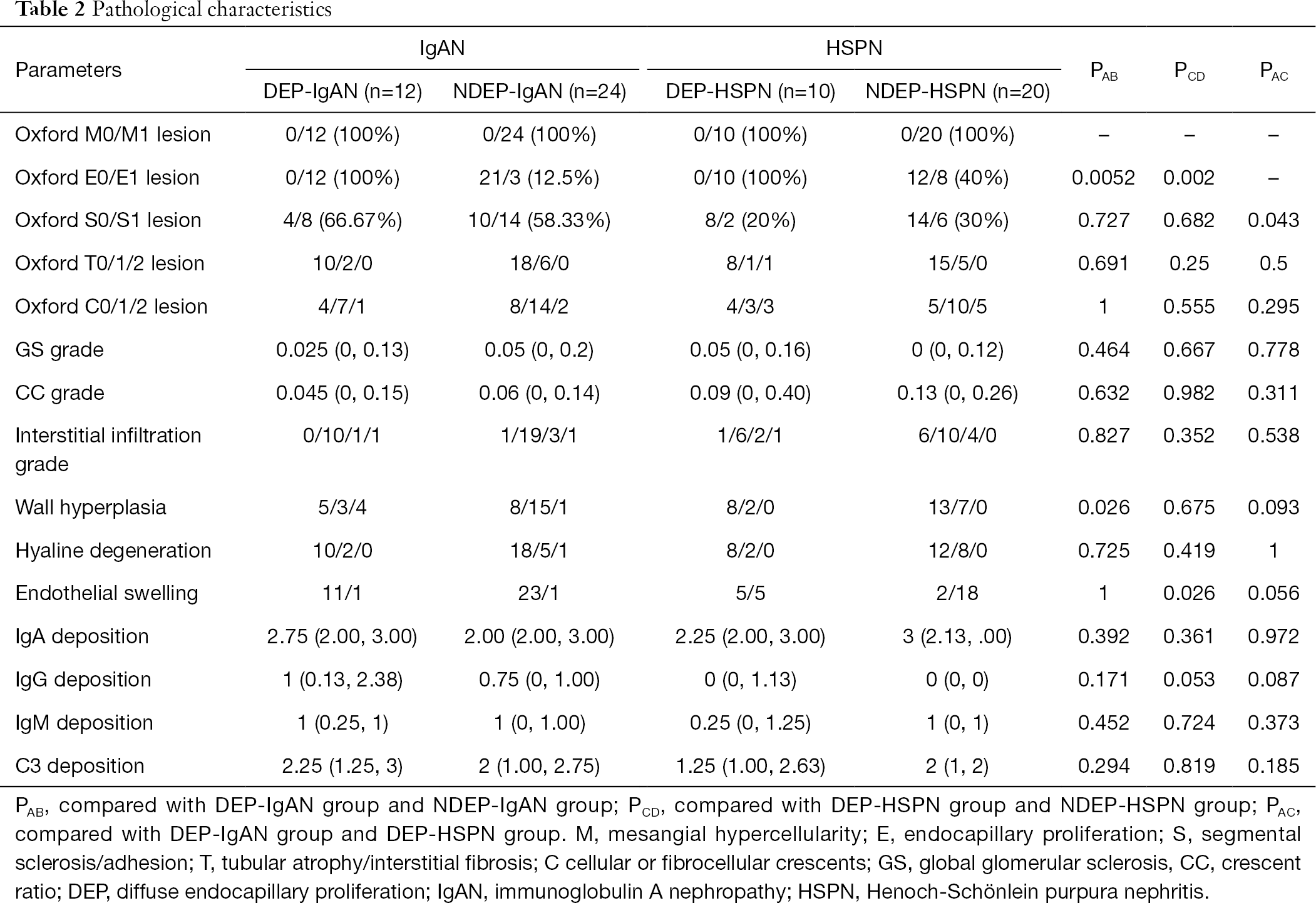 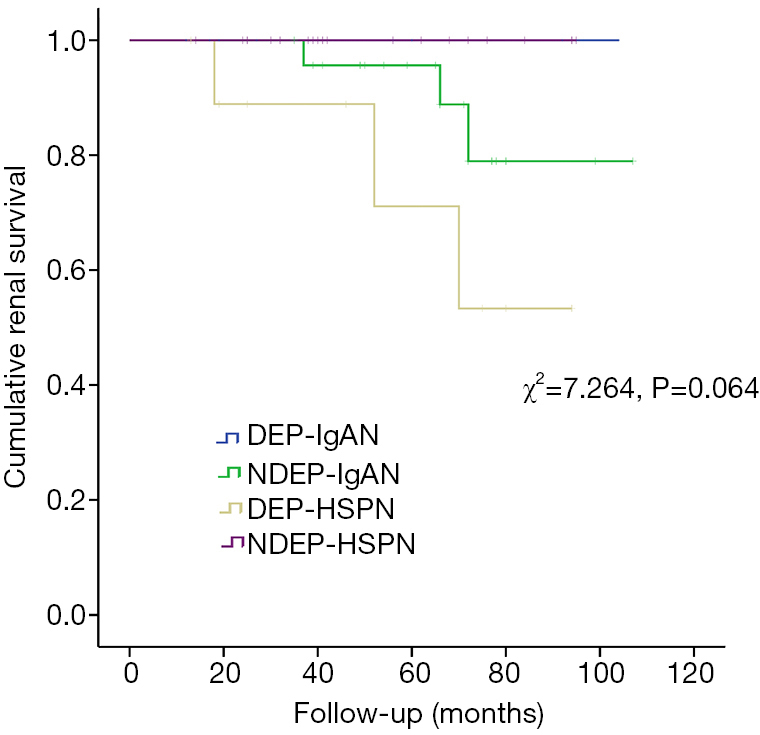 Glomerular capillary endothelial cells belong to the endothelial system but are functionally different from other endothelial cells due to their special anatomical location. As a part of the renal filtration barrier, they play important roles in maintaining the integrity of glomerular capillary structure and selective filtration barrier function. They are regulated by a variety of substances in the plasma and podocytes, and can affect the negative charge barrier of the glomerular basement membrane (17).

Endocapillary hypercellularity is often observed in the histological lesion of IgAN and HSPN. In addition, the lack of terminal b1-galactosyl residues in the hinge region of IgA1 has been observed in both diseases, along with the increased aberrantly glycosylated IgA1 (5,18). However, the deposition of IgA component or other complements in the capillary wall is not necessary for the progression of IgAN with EP. In 2014, Hodgin et al. (19) evaluated the glomerular transcriptome of microdissected kidney biopsies from IgAN patients with EP, and identified a total of 424 differentially expressed genes between EP-IgAN patients and NEP-IgAN patients. Moreover, most of these differentially expressed genes are related to the inflammation and T cell signal transduction, which suggests that IgAN may mediate the occurrence of EP through a similar mechanism. In HSPN, it has been reported that the activation of endothelial nitric oxide synthase and the enhanced binding of IgA1 anti-endothelial cell antibodies (AECA) to the endothelial cells contribute to the lesions of endocapillary proliferation (20,21).

In the present study, there was no significant difference in the median age of diagnosis between DEP-IgAN group and DEP-HSPN group. The age in both DEP groups seemed to display a bimodal-like distribution, and most of patients were younger than 30 years or older than 60 years (Figure 2). The age distribution was similar to that in HSPN patients with E lesions as reported in a previous study (6). In addition, the course of disease was markedly shorter in the DEP groups, especially in the DEP-HSPN group, which suggests DEP being an acute lesion.

Some studies, including the Oxford cohort and the European VALGA cohort, have shown the correlation between capillary endothelial proliferative lesion and baseline urinary protein level in patients with IgAN (22,23). In another cohort study on IgAN patients with DEP, the average proteinuria was 6.9 g/d, which was significantly higher than in IgAN patients without proliferative endocapillary lesions (13). Our study also showed an increased proteinuria in two DEP groups, and the proteinuria in patients with DEP-HSPN was higher than in those with DEP-IgAN, which may be related to the extra involvement of small vasculitis and the endothelial injury caused by AECA and other factors. No evidence supports that the renal function in DEP-IgAN patients was significantly different from that in patients with other types of IgAN. However, in the present study, the baseline eGFR was markedly different between DEP-HSPN group and NDEP-HSPN group, though the serum creatinine was comparable, which was attributed to the relatively lower plasma ALB affecting the calculation of eGFR in the DEP-HSPN group.

The M, T and C scores were comparable between DEP-HSPN group and DEP-IgAN group, but patients with DEP-HSPN had lower S1 scores, suggesting milder segmental glomerulosclerosis. Moreover, DEP-HSPN patients had more severe capillary swelling. As a kind of vasculitis, the main pathological changes of purpura are the broken white blood cells in the superficial dermis, swelling of vascular endothelial cells and infiltration of neutrophils (24). The injury of endothelial cells can be manifested as cell swelling at early stage, which indicates the lesion being mainly acute. This can be explained as the short course of DEP-HSPN. Therefore, pathological changes such as focal segmental sclerosis or vascular wall hyperplasia are rare at this stage.

Proliferative lesion in the capillaries may disappear when repeated renal biopsy is performed in IgAN patients with diffuse capillary hyperplasia, indicating that this type of lesion is reversible (27). Different from IgAN, in HSPN patients, IgA1 AECA binds to small vessels via β2-glycoprotein I (β2GPI) or other factors on the endothelial cells to induce the production of inflammatory cytokines. Processes such as antibody-dependent cellular cytotoxicity (ADCC), complement dependent cytotoxicity (CDC), neutrophil extracellular traps (NETs) and reactive oxygen species (ROS) production may cause damage to the endothelial cells (20). Furthermore, inflammatory waterfall and feedback effect may cause continuous and irreversible damage. Therefore, our findings suggest the significance of DEP in the IgAN and HSPN is different, which reminds clinicians to pay more attention to HSPN patients with DEP.

There were still limitations in this study. This was a retrospective study from a single center, and the sample size was small. Although the incidence of HSPN is higher in Asian people than in other populations, adult HSPN is still rare among secondary kidney diseases, especially HSPN with DEP. Therefore, it is difficult to enroll a sufficient number of adult patients with HSPN. Thus, more prospective, multi-center studies with large sample size are needed to confirm our findings.

The DEP is significantly associated with more severe proteinuria and hematuria in both IgAN and HSPN. Different from DEP-IgAN, HSPN-DEP patients have poorer response to therapy and poorer renal outcome, even under active immunosuppressive therapy.

Conflicts of Interest: All authors have completed the ICMJE uniform disclosure form (available at http://dx.doi.org/10.21037/apm.2020.04.04). The authors have no conflicts of interest to declare.

Ethical Statement: The authors are accountable for all aspects of the work in ensuring that questions related to the accuracy or integrity of any part of the work are appropriately investigated and resolved. The study was conducted according to the Declaration of Helsinki and approved by the Institutional Review Board of Hangzhou Hospital of Traditional Chinese Medicine (No. H-1002-032-309). The informed consent was waived since the study did not infringe on patient privacy or health status.