The left ventricular dysfunction (LVD) causes secondary elevation of pulmonary pressure, which contributes to the more detrimental prognosis of myocardial infarction (MI) (1,2). Previous studies have reported that ventricular diastolic dysfunction accompanied by elevated left ventricular diastolic pressure (LVDP) is common after acute ischemic infarction (3). Left ventricular end-diastolic pressure (LVEDP) has been used as an important marker of LVD in hemodynamic assessment (4,5) and a strong predictor of prognosis in patients with ischemic heart diseases (6). Higher LVEDP has been associated with worse outcomes after balloon aortic valvuloplasty (7). Although noninvasive methods such as Doppler echocardiogram have been adopted to estimate LVEDP, catheterization remains the gold standard for its measurement. Therefore, in order to prevent adverse cardiac events, it should be beneficial to determine the predictive value of LVEDP and identify the factors that affect LVEDP, thus enabling prognostic prediction in patients with ischemic heart diseases.

Acute ST-segment elevation myocardial infarction (STEMI) is distinguishable from non-STEMI with respect to mechanisms, clinical symptoms, and prognosis. The current study specifically investigated factors that affect LVEDP in STEMI patients. The 1998 European Society of Cardiology work report (8) and its 2007 revised report (9) have stated that LVEDP above 16 mmHg serves as a marker of LV diastolic dysfunction. Therefore, in the current study, an LVEDP of 15 mmHg, measured by left heart catheterization, was used as the cutoff value for investigating factors associated with elevated LVEDP.

STEMI patients admitted to the emergency room (ER) of the Fourth Affiliated Hospital of China Medical University (Shenyang, China) between January of 2014 and July of 2017 were included in this study. STEMI was diagnosed based upon a combination of increased MI biomarkers, clinical symptoms, and electrocardiography (ECG). Patients exhibiting acute pulmonary edema, shock, cerebral vascular disease, or severe impaired liver/renal functions, or whose MI onset was longer than 12 hours prior to enrollment were excluded. The study was approved by institutional ethics committee of the 4th Affiliated Hospital of China Medical University (No. EC-2017-KS-043) and informed consent was taken from all the patients. Written informed consent was obtained from the patient for publication of this study and any accompanying images. A copy of the written consent is available for review by the Editor-in-Chief of this journal. Patients were divided into two groups according to their pre-angiography LVEDP: group A (LVEDP of 15 mmHg or less) and group B (LVEDP above 15 mmHg). All patients received percutaneous coronary intervention (PCI) within 12 hours after MI onset.

Demographic data were collected at patient admission to the hospital. Baseline cardiac function data and imaging data were obtained within 12 hours after the admission and before PCI. The endpoint of study was clinical death.

To obtain a Gensini score for coronary artery disease, the narrowness of each segment was evaluated by three experienced technicians. It was calculated according to Gensini et al., and this score was then used to determine the severity of coronary disease.

LVEDP was obtained by averaging three recorded maximum pressures at the end of the deep exhalation, measured with a 5F pigtail tube immediately before and after left ventricular angiography. The angiography applied 30 mL radio-contrast dye, at 15 mL/s and 800 kPa. The difference between two LVEDPs was calculated as ΔLVEDP. 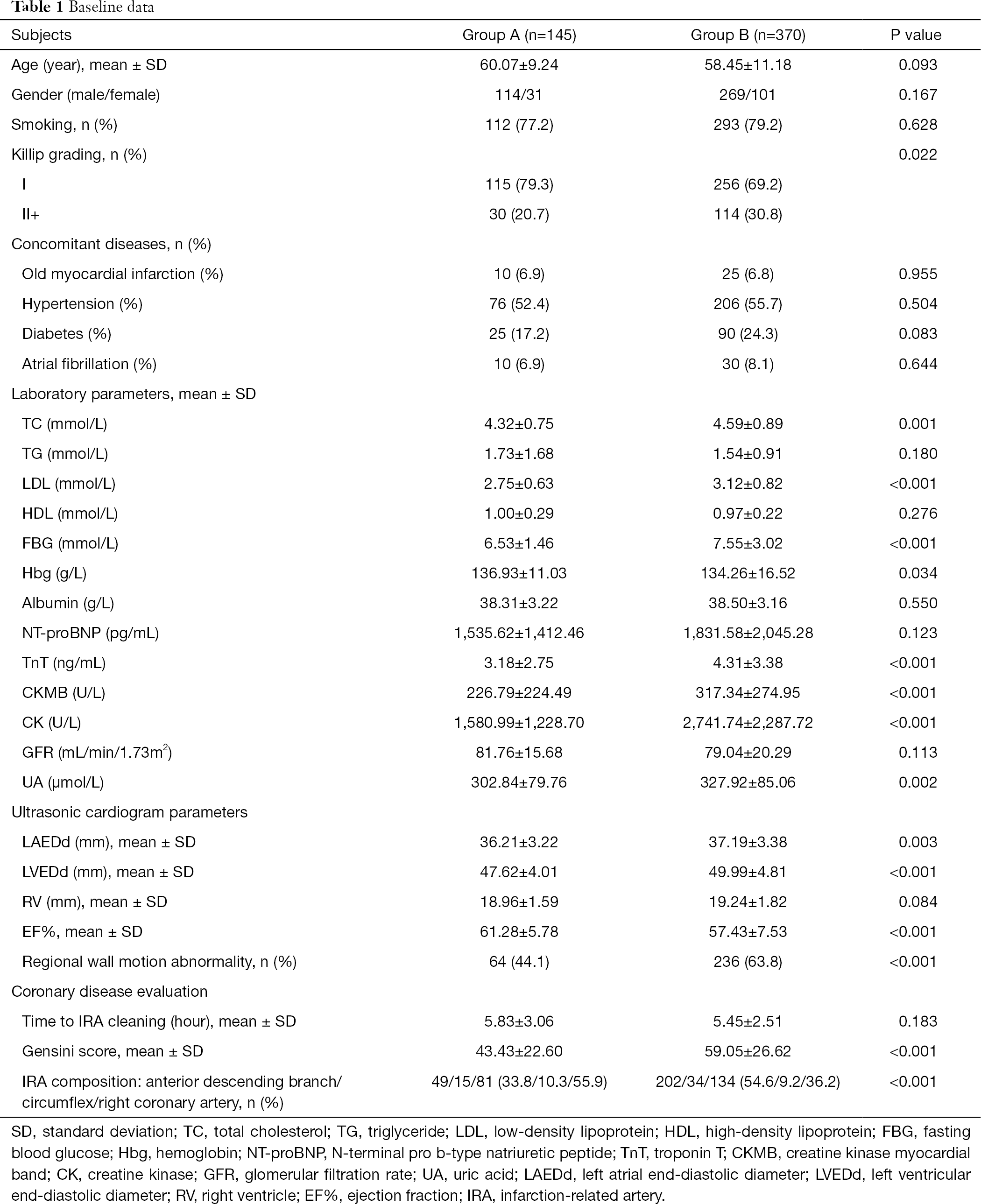 Changes in LVEDP and IRA

Correlation of LVEDP and multiple parameters 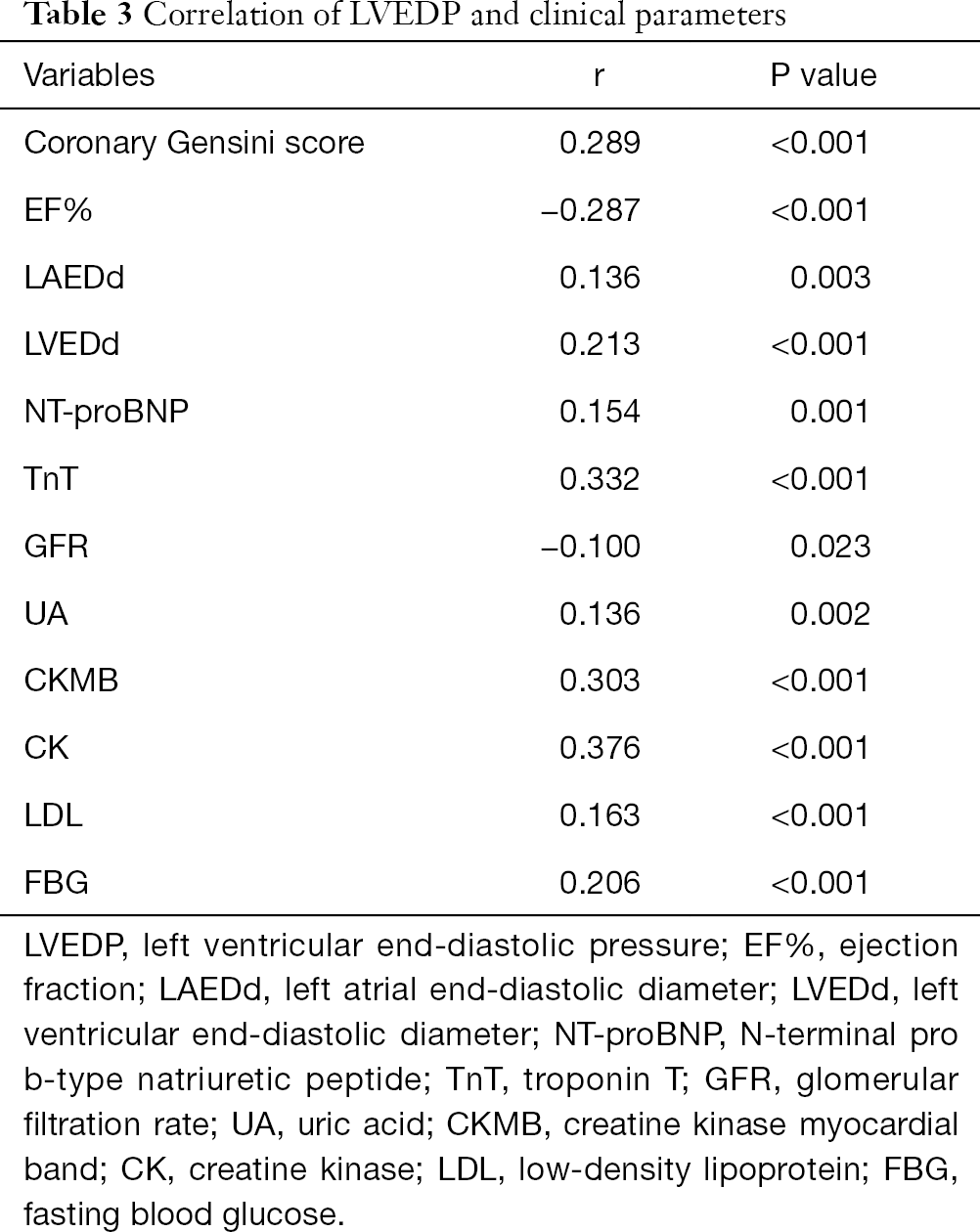 In present study, the proportion of anterior descending branch in IRA of group B was significantly higher than that of group A. In comparison with group A, group B also showed a greater LVEDP change in the right coronary IRA before and after angiography and a higher incidence of heart failure.

In this study, LVEDP was positively correlated with TnT, CKMA, and CK. This result can be explained as impaired ventricular diastolic functioning resulting from MI elevates LVEDP.

Studies by Kirtane et al. (10-12) showed a correlation between elevated LVEDP, longer hospital stay and higher rate of heart failure within 30 days after a STEMI. Patients with an LVEDP greater than 24 mmHg had a worse prognosis and a higher incidence of mortality. These studies suggested LVEDP as an independent predictor of re-hospitalization and prognosis after STEMI (13-15). Satiroglu et al. (16) identified STEMI as the cause of decreased left ventricular compliance, increased LVEDP, and impaired left ventricular diastolic function. LVEDP can be measured before and after PCI without any resulting complications, and therefore can be used for quick evaluation of diastolic function improvements.

Acute MI is an acute myocardial ischemic necrosis that often results from complete coronary stenosis due to a thrombosis induced by broken unstable plaques, and it is a common and crisis condition of left heart diseases (17). In the current study, severe coronary pathology was initially verified by pre-angiography catheterization in STEMI patients; 71.8% patients had an LVEDP above 15 mmHg before PCI suggests that most STEMI patients have ventricular systolic and/or diastolic dysfunction at the early stage. If systolic or diastolic dysfunction continues, the left ventricular filling pressure and left atrial pressure will increase, leading to obstructed pulmonary intravenous circulation and increased pulmonary pressure with or without pathological changes in small arteries (18).

A few studies have reported that LDL, FBG and UA are independent risk factors for cardiovascular diseases and are closely associated with the severity and prognosis of coronary diseases and heart failure (19-22). Results of this study showed that levels of LDL, TC, FBG and UA were significantly higher in the LVEDP elevation group; LDL, FBG, UA and NT-proBNP were positively, and GFR was negatively correlated with LVEDP. LVEDP also increased with impaired renal function. These data suggested that LVEDP can be used to predict the severity and prognosis of coronary diseases.

Results showed that the rate of regional wall motion abnormality, LAEDd, LVEDd and EF% were significantly different in the two groups. LAEDd and LVEDd were higher in group B while EF% was lower in this group. The LVEDP elevation group included a larger proportion of patients with regional wall motion abnormality, as well as more patients with heart failure. One possible mechanism underlying these observations is that the myocardial necrosis after STEMI leads to a fibrosis scar and myocardial remodeling, resulting in increases of LAEDd and LVEDd, which in turn lead to the LVD and increased LVEDP. As LVEDP continuously increases, the pulmonary artery pressure increases because of the escape beat arrhythmia, ultimately leading to heart failure.

This study has the following limitations. First, this is a single-center study with a small sample size of local patients, and therefore, selection bias could not be eliminated. Second, the study only recorded clinical parameters prior and subsequent to PCI; hence, follow-up data for these patients are not available. Multi-center studies with larger sample sizes would better elucidate LVEDP changes in STEMI patients.

Conflicts of Interest: All authors have completed the ICMJE uniform disclosure form (available at http://dx.doi.org/10.21037/apm.2020.03.22). The authors have no conflicts of interest to declare.

Ethical Statement: The authors are accountable for all aspects of the work in ensuring that questions related to the accuracy or integrity of any part of the work are appropriately investigated and resolved. The study was conducted in accordance with the Declaration of Helsinki (as revised in 2013). The study was approved by institutional ethics committee of the 4th Affiliated Hospital of China Medical University (No. EC-2017-KS-043) and informed consent was taken from all the patients.