Esophageal cancer is predicted to be the seventh most commonly diagnosed cancer and the sixth leading cause of cancer death worldwide in 2018, with about 57,200 new cases and 50,900 deaths annually (1). It ranks fifth in incidence and fourth in mortality in China (2). Surgery is a major component of treatment for esophageal cancer, but the 5-year relative survival rate is still only 19%, with a rate of 45% for localized tumors and 24% for regional tumors (3). Therefore, the survival benefit from surgery is limited, which provides a basis for comprehensive treatment. Although the National Comprehensive Cancer Network (NCCN) guidelines do not recommend further adjuvant therapy for patients with esophageal squamous cell carcinoma (ESCC) after R0 resection (4), postoperative radiotherapy was shown to improve overall survival (OS) especially for patients with stage III ESCC or positive lymph nodes (5,6). We want to further support this conclusion through our retrospective study to see if postoperative chemoradiotherapy or sequential chemoradiotherapy is effective for ESCC.

From September 2011 to September 2017, patients diagnosed with stage pT3–4 and pN+ ESCC who were definitively treated with postoperative radiation, with or without concurrent or sequential chemotherapy after esophagectomy, were selected for this study. Patients who did not complete postoperative radiotherapy, had a history of another malignancy, received preoperative chemotherapy, or were in stage M1 were excluded.

Tumor location was determined by the results of preoperative esophagoscopy, while tumor size, extent of nodal disease, tumor differentiation, lymphovascular invasion (LVI), and nerve invasion were based on pathology reports. The eighth edition of the American Joint Committee on Cancer staging system was used to determine the pathologic stage of the disease.

Survival analysis by the Kaplan-Meier method was performed using the SPSS 23.0 statistical software. Multivariate analyses using Cox proportional hazards survival regression model to evaluate the influence of covariates on OS, DFS, and LRFS. Significant values were defined as those with a P<0.05.

Between September 2011 and November 2017, we enrolled 257 patients in the study, of whom 228 met the inclusion criteria and were eligible to participate. The patient and tumor characteristics are shown in Table 1. 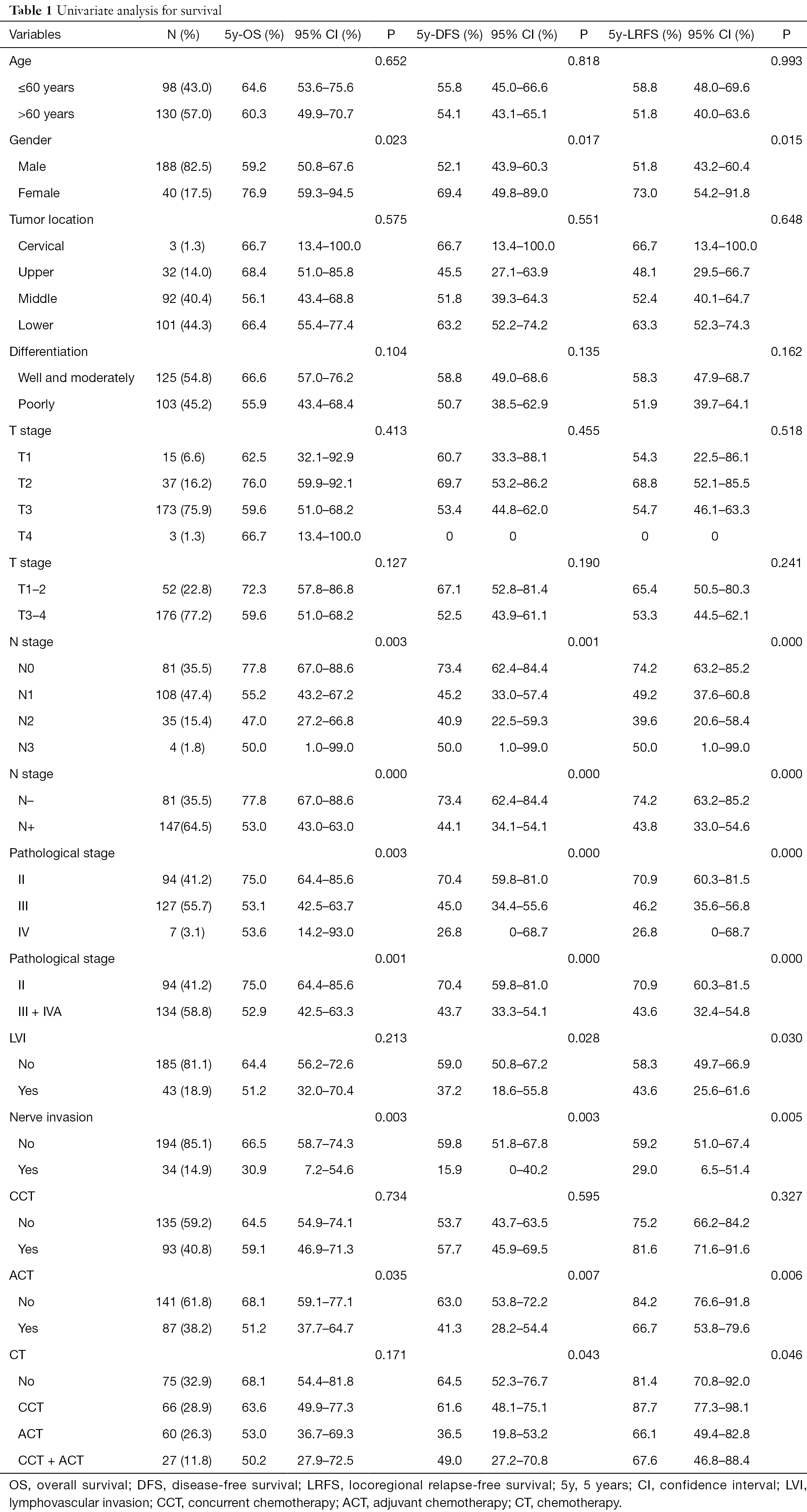 Acute toxicity during treatment was mild with 42 of 228 patients exhibiting grade 3 leukopenia; none had grade 3 or above skin-related toxicity, cardiac toxicity or lung toxicity (Table 2). A total of 22.4% (51/228) patients were confirmed to have varying degrees of anastomotic stenosis by endoscopy or esophagogram; 10 of them needed periodic esophageal balloon dilatation. In these 51 patients, 16 had anastomotic stenosis within half a year of surgery, which was not considered a side effect of postoperative radiotherapy. 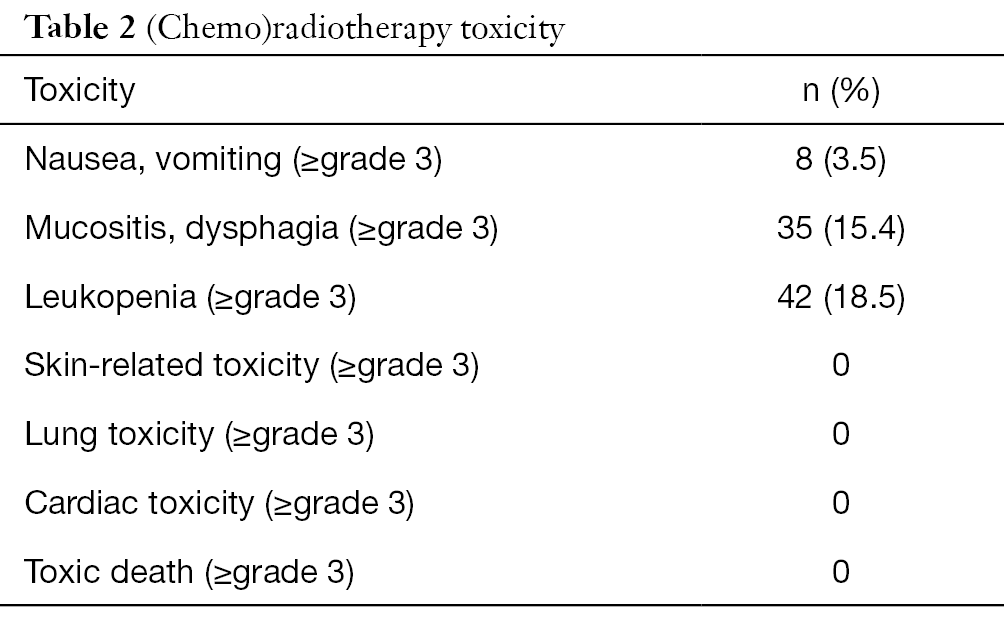 Esophageal cancer is the sixth most common cause of cancer-related deaths worldwide and is 3 to 4 times more common in men than in women (1,3). In China, ESCC is the most common histology, and seems to be more sensitive to chemotherapy, radiation therapy, and chemoradiation than adenocarcinoma.

For resectable ESCC, neoadjuvant chemoradiotherapy followed by surgery has been regarded as a standard primary treatment and is recommended by the NCCN guidelines (4). However, a large number of patients still receive upfront surgery, which is still an option in the guidelines. For patients with R0 resection, no additional treatment other than regular follow-up is recommended by the NCCN guidelines.

Considering the poor OS rates in patients who had been treated with resection alone (7), adjuvant therapy may be necessary. Since the 1990s, postoperative radiation for esophageal cancer has been attempted. As these trials were designed more than 20 years ago by employing a conventional two-dimensional radiotherapy (2D-RT) technique, they failed to show a survival advantage between patients who had surgery with and without postoperative radiotherapy (8,9). Since then, radiotherapy technology has developed rapidly. New technology such as four-dimensional chemotherapy, IMRT, and proton beam therapy have been applied in clinical practice, hence the role of postoperative adjuvant radiotherapy needs to be re-evaluated. In recent years, there have been many trials trying to investigate whether postoperative radiotherapy could improve cure rates compared with surgery alone, and the results seem to be affirmative (10-15).

In our retrospective study, the role of adjuvant radiotherapy in advanced ESCC patients after surgery was assessed. Most of the patients who were entered into this study had a pathologic stage II–III tumor (41.2–55.7%) and only 7 (3.1%) patients had stage IVA esophageal cancer. The median OS was 34 months with a 5-year OS of 62.2%, which was much higher than the OS of 18.6–45.8% of the surgery alone group in previous reports (8,15-17).

SWOG 9008/INT-0116 investigated the effectiveness of surgery plus postoperative chemoradiation on the survival of patients with resectable adenocarcinoma of the stomach or esophagogastric junction (18). For ESCC, there are no such landmark intergroup trials, but some retrospective studies have affirmed the outcome of our study.

CCT did not show a survival benefit in pN+ patients in our retrospective study. However, in patients with stage III + IVA disease, we found that CCT had no significant effect on OS and LRFS, but it improved DFS in such patients. Univariate analysis showed that 5-year DFS could be increased from 35.1% to 55.5% (P=0.025). We did not observe the benefits of CCT for OS and LRFS as previously described, possibly because the chemotherapy regimen we used was not the same, but the univariate analysis still showed an increasing trend in 5-year LRFS (65.3% vs. 78.6%, P=0.061). In addition, considering that we have adopted three chemotherapy regimens, if we subdivide our cohort into specific chemotherapy regimens, the sample size of each group would be too small and the results obtained would not be credible, so we did not further analyze our results according to the specific chemotherapy regimens. Therefore, we may get more reliable results after unifying the chemotherapy regimen and further expanding the sample size.

In our study, all treatment side effects were acceptable. Although some patients had anastomotic stenosis, we were not sure whether it was caused by surgery or postoperative radiotherapy.

As we mentioned above, there were some limitations in this study. The first is that the sample size needs to be expanded; especially when subgroup analysis is performed, the sample size of each group would be even lower. In addition, we did not consider the KPS at the time of treatment and some patients may have a poor prognosis due to a lower KPS during chemotherapy. Furthermore, the chemotherapy regimens in this article were not the same and we have yet to analyze the effects of each specific chemotherapy regimen. These can only be analyzed further with an expanded sample size.

For locally advanced ESCC, optimal treatment guidelines for the administration of postoperative adjuvant therapy have not been established. Our study clearly observed the benefits of postoperative concurrent chemoradiotherapy on DFS in patients with stage III + IVA disease. Sequential chemoradiotherapy may be associated with a poor LRFS. In addition, being male, having a higher T stage, and being node-positive were considered to be independent poor prognostic factors for OS and DFS.

Ethical Statement: The authors are accountable for all aspects of the work in ensuring that questions related to the accuracy or integrity of any part of the work are appropriately investigated and resolved. The study had been approved by the institutional review board (IRB) (the number of approval document: 2019-SR-410). The patient data in this study were retrieved from our hospital medical record system, the informed consent form was waived. The study outcomes will not affect the future management of the patients.