External beam radiation therapy administered to the pelvis may cause side effects including gastrointestinal and genitourinary complications, sexual dysfunction, and dermatologic toxicities (1). Specifically, gastrointestinal complications such as radiation enteritis are common, with approximately 90% of patients who receive pelvic radiation experiencing transient or permanent bowel problems (2-4). Radiation enteritis presents with diarrhea and abdominal pain (5-8), and can cause significant morbidity (5). Approximately 50% of patients with radiation enteritis report impaired quality of life (QOL), with 20–30% noting a moderate or severe effect (2-4).

Irradiation and damage of the bowels can also cause other gastrointestinal symptoms such as nausea and vomiting through stimulation of the gastric receptors including neurokinin-1 and serotonin (5-HT3) (9-11). Radiation-induced nausea and vomiting (RINV) can have a significant impact on patient-reported QOL (9-12). According to clinical guidelines, patients may receive prophylaxis or rescue with a 5-HT3 receptor antagonist (RA) for radiation to the pelvis (13); these medications along with other anti-emetics such as neurokinin-1 antagonists can be prescribed for the prophylaxis of RINV (14). However, a common distressing side effect of these medications is constipation (9,15) which can also have an impact on QOL (16).

Clinicians face challenges with patients receiving pelvic radiation not only because it can cause radiation enteritis and diarrhea (2-4), but also because the medications typically given for prophylaxis of RINV are known to cause constipation (9,15). Furthermore, many of these patients are on pain medications which can cause constipation (17-19). The objective of this study was to determine the prevalence of diarrhea and constipation in patients who received pelvic radiation across three prospective trials studying the efficacy of various anti-emetic medications.

Patients undergoing palliative radiation between January 2011 and March 2017 at the Sunnybrook Odette Cancer Centre were enrolled in three prospective clinical trials studying the efficacy of various anti-emetic medications for the prophylaxis of RINV. Data were collected prospectively from patients receiving pelvic radiation with aprepitant plus granisetron (20), ondansetron rapidly dissolving film (ondissolve) (21), or palonosetron (ongoing study) for the prophylaxis of RINV. Patients in the aprepitant/granisetron study received 125 mg oral aprepitant and 2 mg oral granisetron at least an hour before radiation, and then 80 mg oral aprepitant in the morning on the first two days after radiation (20). Patients on the ondissolve study took 8mg ondansetron rapidly dissolving film twice daily during radiation treatment: the first dose at least one hour before radiation and the subsequent dose 6–8 hours after the first (21). Patients in the palonosetron study took 0.5 mg palonosetron at least an hour before treatment on the first (or only) day of radiation; if they were receiving a fractionated radiation schedule, they took 0.5 mg every other day after the first to the last fraction of radiation. Pelvic radiation constituted radiation administered to pelvic area including the sacrum, hips, iliac and pubic bones. Approval from Health Canada and the institutional research ethics board (No. 434-2013) was obtained prior to commencing each clinical trial. Written informed consent was received from each patient before enrolment. Descriptive statistical analyses were performed.

Patients from all three studies completed questionnaires to monitor QOL over the week prior to baseline and at day 5 and 10 following completion of radiation. Patients who received multiple fractions of radiation in the palonosetron study were also required to complete questionnaires on days 5 and 10 during radiation, if applicable. QOL in the ondissolve and palonosetron studies was assessed using the European Organisation for the Research and Treatment of Cancer (EORTC) Quality of Life Questionnaire-C15 Palliative (QLQ-C15-PAL); similarly, the EORTC QLQ-C30 was used in patients enrolled in the aprepitant/granisetron study. Both questionnaires were validated in this patient population, and had a single item asking patients to rate their level of constipation on a 4-point Likert scale (1= not at all; 2= a little; 3= quite a bit; 4= very much) (22,23).

Patients enrolled in all three studies completed daily diaries at baseline, during the course of radiation if receiving multiple fractions, as well as for 10 days following the completion of radiation. The number of treatment days varied greatly as patients received different fractionation schedules and were often not treated on weekends; accordingly, the number of daily diaries per each patient receiving multiple fractions also varied. Daily diaries consisted of similar content among the three studies, including a question asking patients to rate any diarrhea they had experienced in the past 24 hours on a 4-point scale ranging from “no diarrhea” to “severe diarrhea”. For the present study’s statistical analysis and comparison, a numerical value was assigned for each qualitative response (1= no diarrhea; 2= mild diarrhea; 3= moderate diarrhea; 4= severe diarrhea). 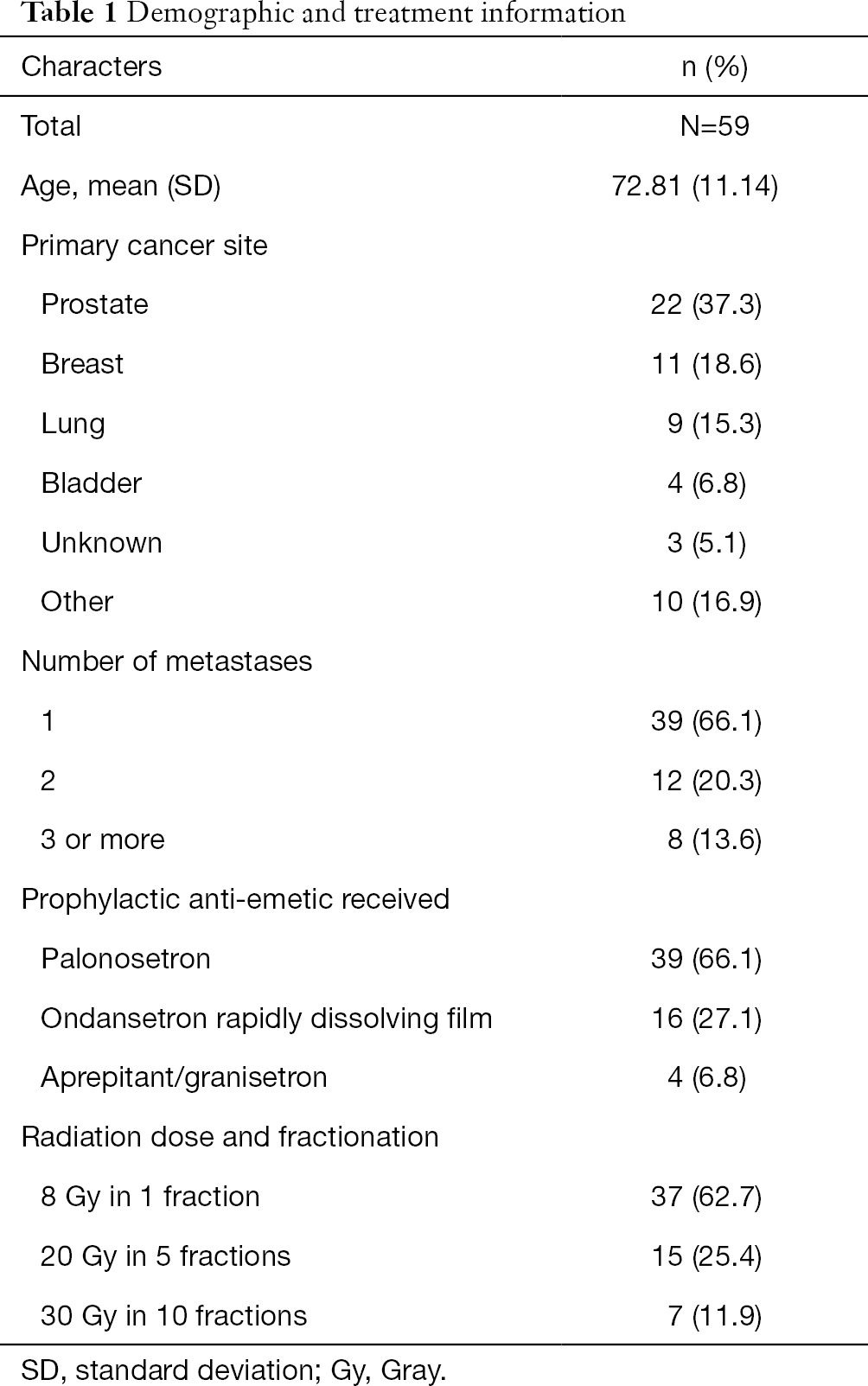 All 59 patients had complete information on severity of constipation at baseline, prior to radiation treatment and anti-emetic consumption (Table 2). The average constipation score at baseline was 1.69 (SD 0.93), indicating that on average patients experienced some constipation before taking the anti-emetic medication. Following radiation, 53 and 52 patients were evaluable for constipation at days 5 and 10 respectively. Average levels of severity were 2.02 at day 5 (SD 1.12) and 1.61 at day 10 (SD 0.80).

All 59 patients had complete data at baseline (Table 2). The average score at baseline was 1.03 (SD 0.18). Patients who had multiple fractions of radiation were given diaries to complete every day during treatment. During radiation treatment for patients with fractionated regimens, 23 patients had diaries completed at day 5 and 7 patients at day 10; the average diarrhea scores for these days were 1.04 (SD 0.21) and 1.14 (SD 0.38), respectively. The average diarrhea score for the last day of treatment among all patients with multiple fractions of radiation was 1.04 (SD 0.21). After five days following the completion of radiation, the average score was 1.02 (SD 0.13). At day 10 of follow-up, the average score was 1.05 (SD 0.30).

Fifty-five patients had complete diarrhea data after 10 days of follow-up (Table 3). A vast majority reported no diarrhea (96.4%), and mild and moderate diarrhea were reported by one patient each (1.8%). No patients reported severe diarrhea at day 10 follow-up.

Diarrhea is a common side effect of radiation administered to the pelvis (2-4). Pelvic radiation can also cause RINV, and patients can experience constipation due to the anti-emetics used for the prophylaxis of RINV (9,15). Both constipation and diarrhea can have an impact on patient QOL.

Rates and severity of constipation across the three studies followed rates of consumption and elimination of anti-emetics. Across the three studies, three 5-HT3 RAs were used including granisetron, ondansetron and palonosetron. These medications also have a known side effect of constipation (9,15). The average constipation score was low at baseline (1.69), and increased steadily during radiation treatment in the patients receiving fractionated regimens. The highest score was at day 10 during radiation (2.33), which fell between the questionnaire items “a little” and “quite a bit”. After radiation was completed, average constipation scores steadily decreased to reach the lowest point of 1.61 at day 10 of follow-up. Additionally, the slight majority reported no constipation at this time and if there was constipation, few reported it as moderate or severe. The decrease in constipation during the follow-up period mirrors the dosing regimen of the anti-emetic medications used. Patients on average presented with some constipation at baseline (1.69) before radiation and administration of the study medication; and at day 10 post-radiation (1.61) despite elimination of the study medication. The results were similar regardless of single or multiple radiation treatments. The presence of constipation at these time points, albeit low, may be explained by many patients experiencing cancer pain and managing their symptoms with analgesics such as opioids, which as previously mentioned have been associated with constipation (17-19).

Overall, the average rate of diarrhea among the three trials was constant through baseline, treatment, and follow-up period. The average score was never higher than 1.14, and typically fluctuated around 1.02–1.05 indicating that almost all patients experienced no diarrhea. Potentially, the low average diarrhea scores among the three trials could be due to the opposing effect that the anti-emetic medications used by each patient had as well as the opioids many patients were likely using. The low rate of diarrhea in the current study could also be due to the low-dose, palliative intent of the radiation administered; one study by Miller et al. reported an association between increased radiation dose and development of treatment-related bowel injury (24).

In our study, constipation was more prevalent than diarrhea throughout treatment and follow-up. Even after 10 days following completion of radiation, approximately 42% of patients experienced some degree of constipation. Both constipation and diarrhea may have an impact on the QOL in palliative cancer patients and management of these conditions is important. Further research is needed to assess the role of narcotics and whether identification of constipation and its treatment during and shortly after palliative radiation to the pelvis significantly improve QOL.

This study had several limitations. We were unable to assess possible confounding variables which impact the symptoms of diarrhea and constipation, notably the use of pain medications and/or laxatives for the outcome of constipation. There was an absence of a validated scoring and a numeric tool for measuring the severity of diarrhea. The definitions of constipation and diarrhea were not explicitly stated to the patients. Additionally, our study had a relatively small sample size. Therefore, future studies in this area should address these limitations.

Ethical Statement: The study was approved by Health Canada and the institutional research ethics board (No. 434-2013) and written informed consent was obtained from all patients.