Perinatal palliative care is specialized medical and emotional support for families who learn as a result of prenatal testing that their babies may die before or shortly after birth. There are about 212 perinatal palliative care programs in the United States: about half of these are hospital-based and only one quarter of hospital-based programs are part of a fetal diagnostic center (1). Most American programs have grown from hospices or pediatric palliative care programs that support delivery hospitals and fetal diagnostic centers.

Until 2013, the San Diego Hospice and Institute for Palliative Medicine (SDHIPM) was the sole provider for San Diego County’s perinatal palliative care. Established in 1997, that team consisted of a hospice nurse, social worker, chaplain, and occasionally a hospice physician who visited families at their homes an average of three times prior to delivery (2). The palliative team’s primary goal was to help families with the process of making choices about pregnancy management and medical decisions for the baby, by constructing a birth plan to incorporate personal and spiritual beliefs into the possible outcomes for their pregnancy and their child (3). The team provided support for anticipatory grief as families grappled with diverse potential outcomes of intrauterine fetal demise, neonatal death, and neonatal survival (4). Prior to delivery, the perinatal palliative care team disseminated the birth plan to the caregivers. Around the time of delivery, the home hospice team would go to the inpatient bedside to assist the family and hospital team in carrying out the birth plan. After a baby was born, the team continued to help family members by gathering keepsakes and assuring that they have time and space to be with their baby, create memories, and for some, say goodbye. The team also offered follow-up services that continued after the baby’s death, including bereavement care and pediatric hospice if indicated.

At the time of this study, there were three high-risk fetal centers in San Diego County that referred to SDHIPM’s Perinatal Palliative Care Program. The University of California San Diego (UCSD) Fetal Care and Genetics Center generated about 50% of SDHIPM’s perinatal palliative care referrals. At UCSD’s fetal diagnostic center, maternal-fetal medicine physicians, medical geneticists, genetic counselors, and radiologists provide concurrent prenatal and genetic counseling to patients and families in one office. Neonatology and other Pediatric subspecialty consults are scheduled separately at different locations. Since 2003, UCSD’s Fetal Care and Genetics Center has kept a database of all women referred for fetal complications. There are over 5,500 entries with information including reason for referral, gestational age at referral, genetic testing, and pregnancy outcome. The purpose of this study is to review referrals to a single high-risk fetal diagnostic center over a 6-year period. The demographic, clinical, and outcome data will provide information on who is and who is not referred to perinatal palliative care in San Diego County, California. Our hypothesis is that a small proportion of women pregnant with a potentially life limiting fetal diagnosis, who could benefit from palliative care services, are referred to perinatal palliative care.

This was a retrospective electronic chart review using a database of pregnant women with fetal anomalies referred to one of three high-risk perinatal centers in San Diego County over a 6-year period. The Institutional Review Board for UCSD Human Research Protections Program approved the protocol for conduct of this study (Project number 131197). We reviewed the medical charts of subjects, entered the abstracted data into the database, and performed the analysis.

The following variables were abstracted from the medical record for those pregnancies characterized as having a potentially life limiting fetal diagnosis:

Descriptive statistics and analyses were performed using Wizard software Version 1.7.20 (Miller, L. Chicago, IL, USA). To compare demographic data by pregnancy outcome, t-test and ANOVA were used when the continuous variables were normally distributed and Kruskal-Wallis was used when the data was not. Categorical variables were analyzed with the Chi square test. A logistic regression model was used to examine the influence of variables on the pregnancy outcome of therapeutic abortion and the outcome of referral to perinatal palliative care. A significance level of P<0.05 was used.

Between July 2006 and July 2012, 1,144 women were referred to UC San Diego’s Fetal Care and Genetics Center for fetal anomalies. Of that cohort, 332 women (29%) were diagnosed prenatally with a potentially life limiting fetal diagnosis. The average maternal age was 30 (SD 7), ranging from 14 to 46 years old (see Table 1). The median maternal age was 31 years old. Most women were Hispanic or Latino, married, and had previous children. 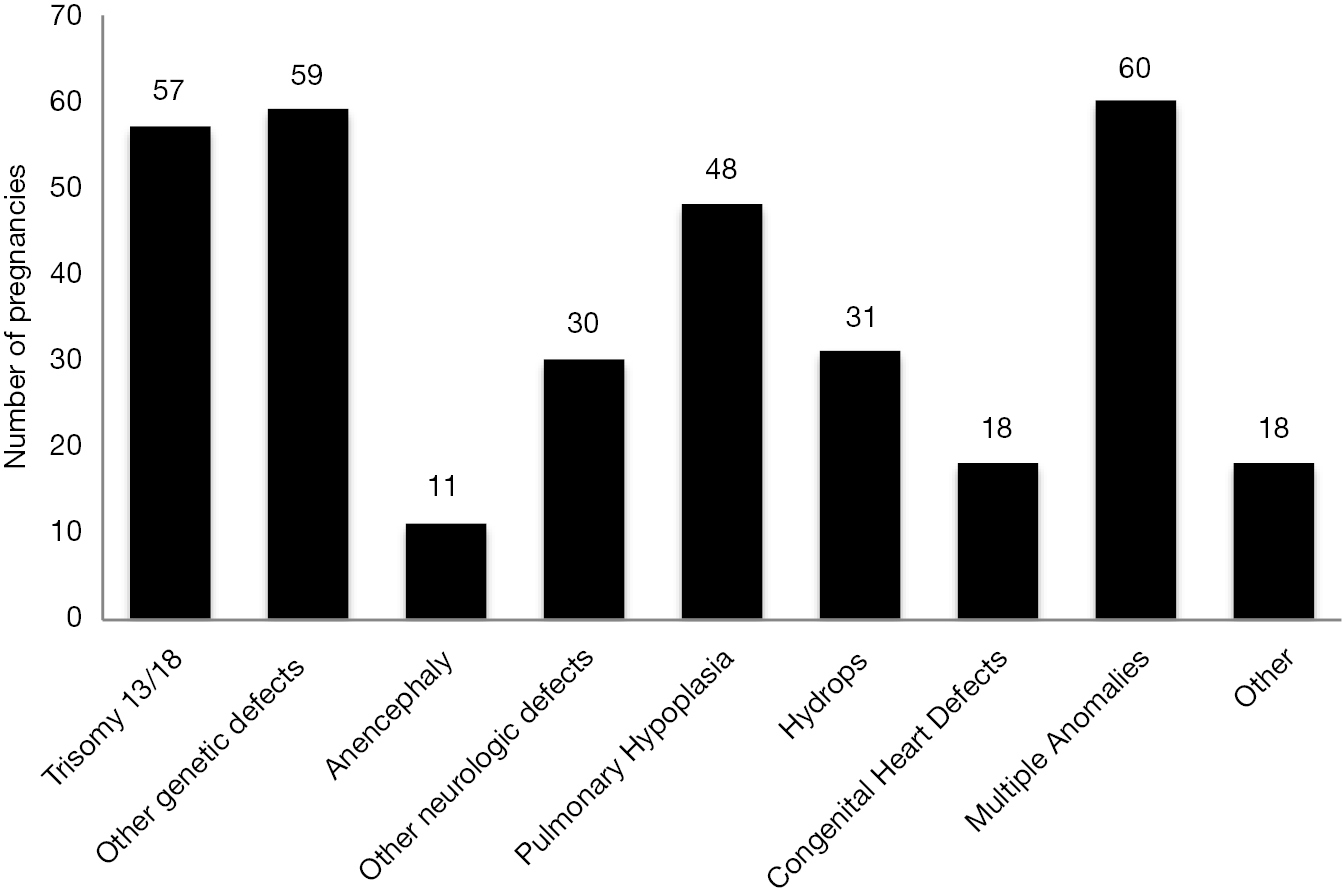 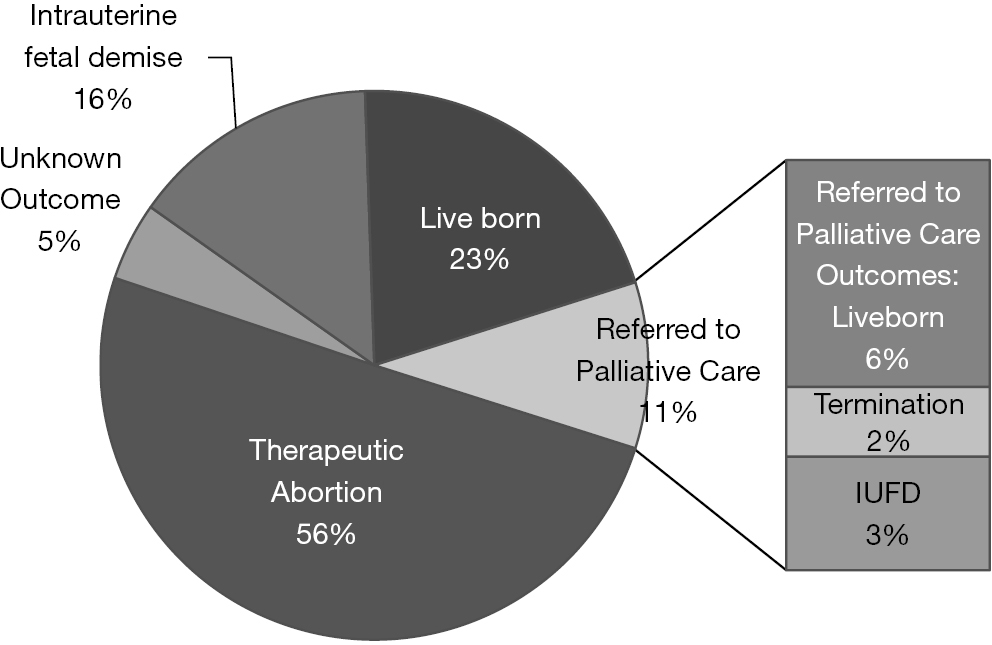 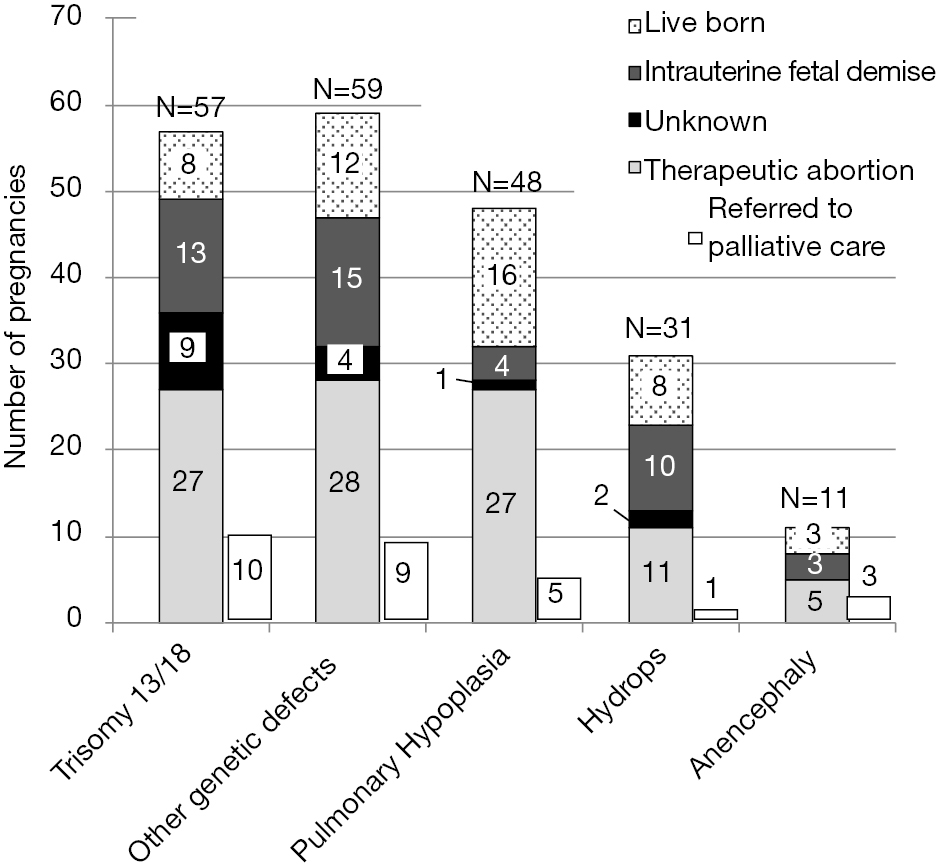 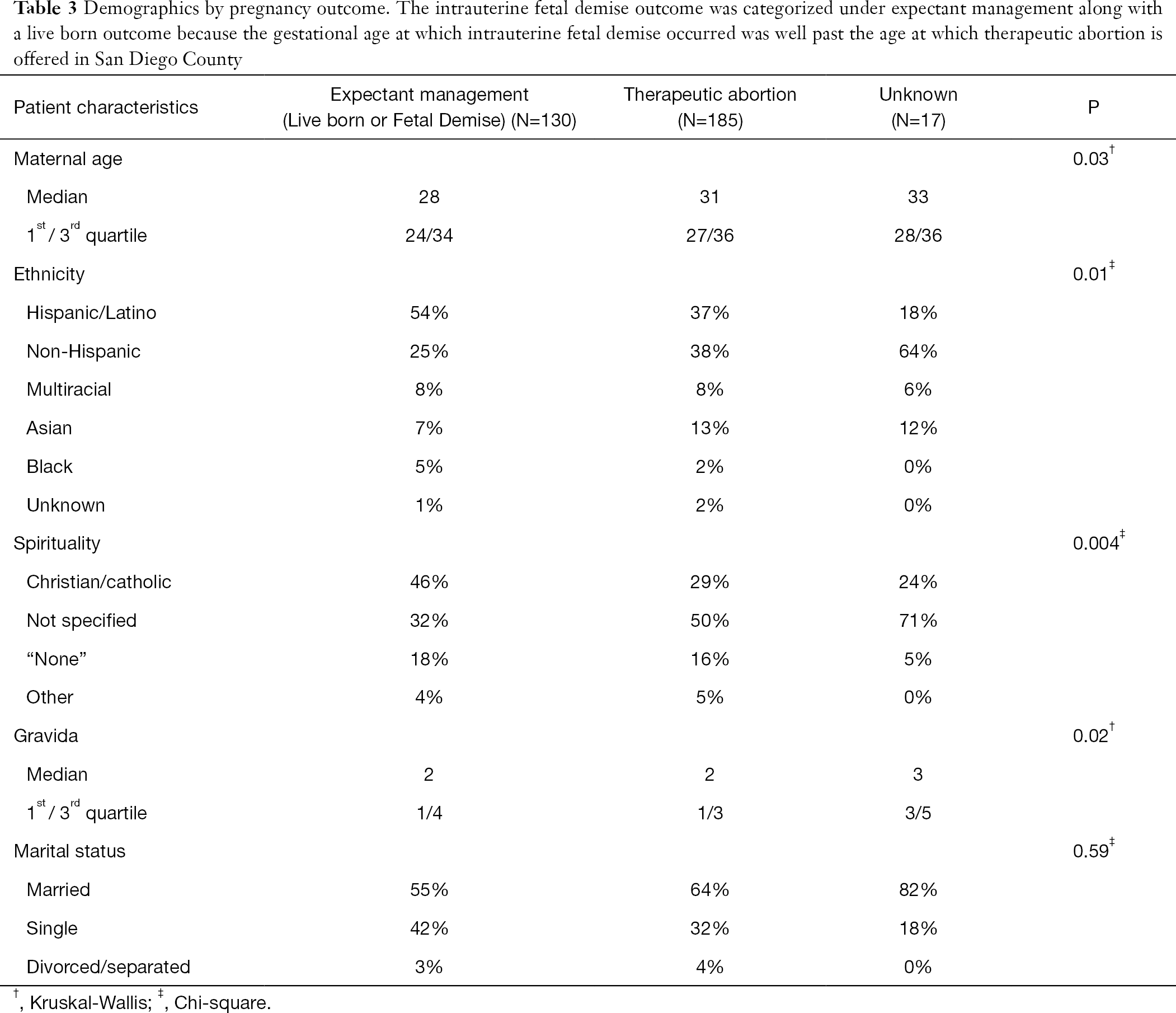 Similarly, there were some differences between women who were referred to perinatal palliative care compared with those who were not. In a logistic regression model, women who were referred to perinatal palliative care before delivery were more likely to have a later gestational age at the time of diagnosis (22±2.1 vs. 19±0.6 weeks, P=0.014), an abnormal genetic test during pregnancy (53% vs. 32%, P=0.015), and were less likely to have had a therapeutic abortion (17% vs. 64%, P<0.001). There were no significant differences in age, ethnicity, spirituality, marital status, or parity between these two groups.

The median gestational ages at the time of pregnancy outcome were statistically different by outcome with therapeutic abortions occurring at 20 weeks, intrauterine fetal demise at 28 weeks, and live born birth at 37 weeks (P<0.001). There were 76 live born infants (Figure 4). The average birth weight was 2,479 grams. The longest surviving infant lived at least 8 years, alive at the time of data collection. Live born infant survival was skewed to the left with the median at 8 days and the average at 112 days. Of the fetal Trisomy 13 and 18 pregnancies, only 4 survived past 24 hours. Pregnancies with fetal pulmonary hypoplasia or fetal congenital heart defects had higher survival rates with 33% or 28% live born, respectively, and more infants surviving past one year, 13% or 17%, respectively. 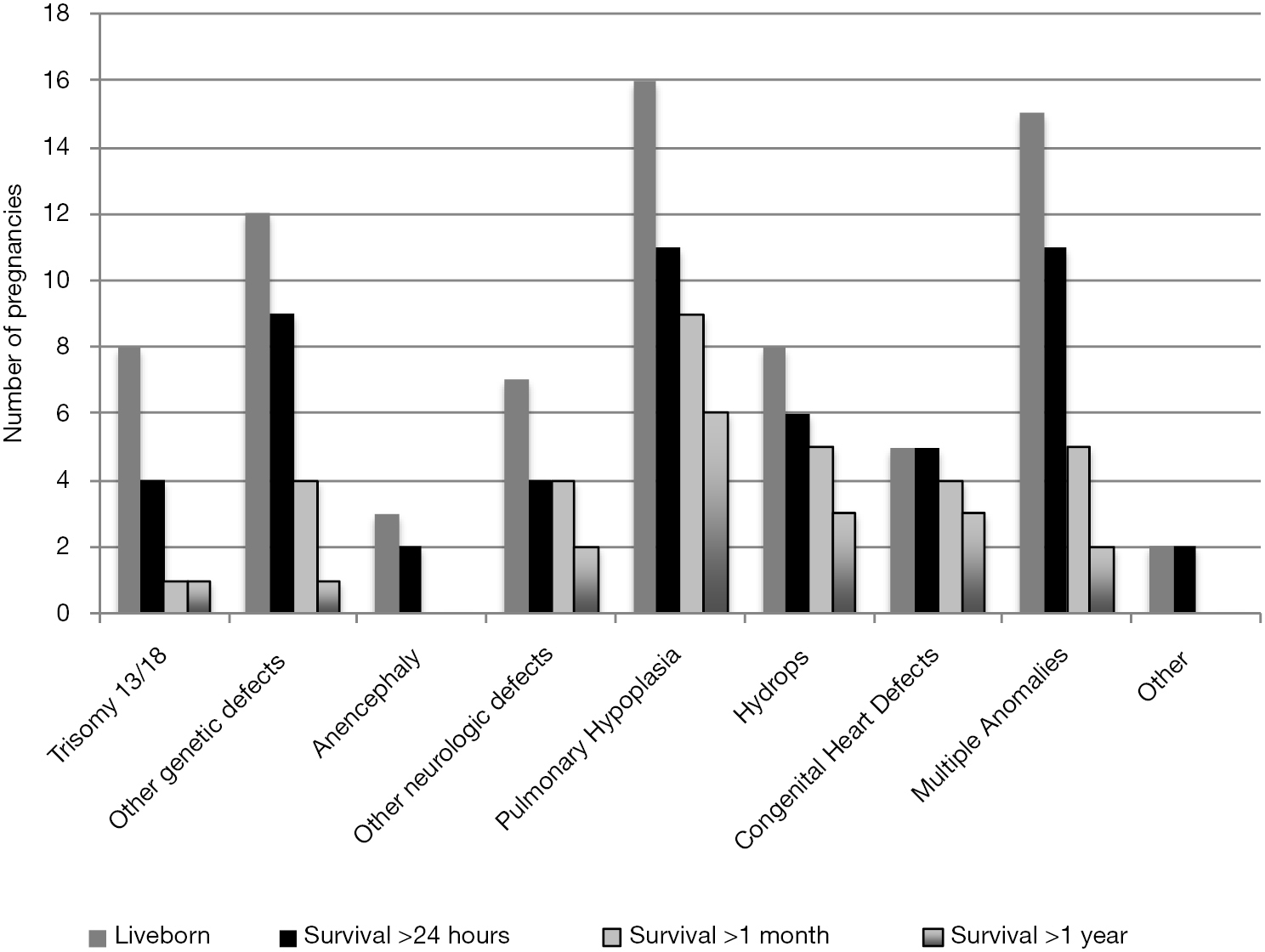 Because of the small number of women referred to perinatal palliative care in this study, we found only a few statistically significant differences between those who were referred and those who were not referred. One apparent difference was that women referred to palliative care were more likely to have had an abnormal genetic test during pregnancy. This may reflect a perceived need by health care providers for diagnostic certainty in order to consult palliative care and is supported by surveyed maternal fetal medicine specialists and pediatric subspecialists for whom the degree of diagnostic certainty was the most influencing factor in discussing perinatal palliative care (6). Tosello and colleagues argue that “professionals cannot avoid the uncertainty” and “this uncertainty must be incorporated by the perinatal professionals” to share with families so that they can plan. Interviews of bereaved parents highlight the importance of continuity of care and memory making (8). During the grieving process, some parents regret how they spent time with their baby (9). Parents want parenting activities, such as bathing, dressing, and holding as memories to reflect upon during bereavement (8,10). Parents who felt involved tended to be more inclined to trust providers and were better able to consider limiting treatment (11). Receiving a palliative consult has been shown to result in fewer days in intensive care units and fewer medical procedures including cardiopulmonary resuscitation for infants, and more frequent referrals for support services for families (12). In particular, families with uncertain but suspected life-limiting fetal diagnoses need perinatal palliative care support to process the diagnosis and what it means for their baby and pregnancy in order to make thoughtful choices ahead (13).

Retrospective studies of perinatal palliative care report infant survival from hours to months (2,13,14-16). The infant survival in our population ranged from hours to years, with 18 infants surviving past 1 year of life. This likely reflects the limitation of accurate prognostication based on prenatal data. Not surprisingly, we also have difficulty predicting death and neurodevelopmental impairment with postnatal information (17-19). Our reality is that we have imperfect means of predicting outcomes. Recommendations for physicians facing considerable prognostic uncertainty are to begin conversations using language that is open to multiple possible outcomes: to “hope for the best and prepare for the worst (20,21)”. This guidance, although intended for conversations with adult patients who face a life limiting prognosis, may also serve as a framework for situations in which a fetus’ outcome is uncertain.

For many women, their decision-making about carrying a pregnancy with a potentially life limiting fetal diagnosis to term is based on their faith (2). About 40% of pregnancies in this study were managed expectantly. This is consistent with three other smaller studies that report between 40–85% of women with probable life limiting fetal diagnoses will chose to continue the pregnancy (5,22,23). If we limit the provision of perinatal palliative care to those who choose expectant management, then we might aim our referral rates to be closer to 40% of pregnancies.

Limitations of this study were due to its retrospective nature. For example, information regarding spirituality and ethnicity were derived from data entered by the medical staff into the electronic medical record fields and may not have been accurate because of the limited choices available in drop down menus. Similarly, the medical record charting frequently did not provide enough information to delineate between spontaneous versus therapeutic abortions for prior pregnancies. These patient characteristics often impact decision-making and would have been useful to evaluate. Furthermore, the study is from a single institution with a population that may not be generalizable to other centers.

Our study shows a low referral rate to a well established home based perinatal palliative care program from an academic fetal diagnostic center in San Diego, California. Just over half of the mothers in this cohort elected for therapeutic abortion, narrowing the chance to provide palliative care to within days. Only one in ten women were referred to palliative care, leaving the majority of women that elect to continue the pregnancy unprepared for the potentially short time they have with their baby. We wonder whether integrating a palliative care representative in the fetal diagnostic center might provide better quality of care and outcomes for families with potentially life limiting fetal diagnoses.

We thank Tomorrow Shorty and the staff at the Fetal Care and Genetics Center for their assistance. This study was unfunded.

Ethical Statement: The Institutional Review Board for UCSD Human Research Protections Program approved the protocol for conduct of this study (Project number 131197).