Radiation therapy for the treatment of skin Kaposi sarcoma

Kaposi sarcoma (KS) is a non-curable malignancy caused by infection with human herpes virus 8 (HHV8) which can present as skin lesion with or without internal organ involvement (1,2).

KS lesions are purplish, reddish blue or dark brown/black macules, plaques or nodules which involve the skin and mucous membranes. These lesions may bleed, ulcerate and may be associated with lymphedema, pain and secondary infection (3). Most patients with KS have a long indolent chronic course.

There are four subtypes of KS (4):

Localized cutaneous KS may be treated with radiotherapy, cryotherapy, intralesional injections of vinblastine or topical immunotherapy. Extensive skin or internal involvement with KS may be treated with chemotherapy or immunotherapy. Highly active antiretroviral therapy (HAART) is considered first-line therapy for AIDS related KS. For iatrogenic KS due to immunosuppression, reduction or discontinuation of immunosuppressive therapy is recommended (5).

A retrospective review was undertaken for all KS patients treated with radiotherapy at a tertiary cancer centre from Jan. 2, 1999 to Dec. 31, 2014 (inclusive). This study was approved by the local hospital Research Ethics Board. 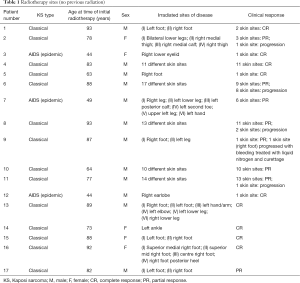 No fatal toxicities occurred. The most common side effects were dry desquamation, hyperpigmentation and lymphedema.

KS was first described in 1872 by Moritz Kaposi. Microscopic characteristics include disorganized endothelial cell proliferation and blood-filled vascular clefts with areas of organized micro-neovascularizations. An inflammatory infiltrate is also commonly seen (1). Since the description of KS (a classical or Mediterranean type) by Moritz Kaposi, two additional forms were identified (African endemic KS and post-transplantation or iatrogenic KS). With the emergence of the AIDS epidemic in the early 1980s, the 4th type AIDS (epidemic) emerged.

A systematic review published in 2012 regarding the management for classic KS was undertaken by Régnier-Rosencher et al. (6). There were only 26 articles with at least five patients included in the systematic review. Of these included studies, only four were radiotherapy publications (9-12). The number of patients included in these radiotherapy series ranged from 27 patients to 209 patients. All the series were retrospective except one (9).

There is a lack of controlled prospective studies which examine the optimal radiation dose fractionation schedule for response and symptom control. Reported dose fractionation schedules range from 6 Gy in 1 fraction to radical dose fractionation schemes to a total of 45 Gy (9). A randomized trial was reported for AIDS associated KS. Sixty patients with 65 sites of AIDS related KS skin sites were randomized to 24 Gy in 12 fractions versus 20 Gy in 5 fractions. The authors concluded that response and local control rates were not statistically different between the two arms. Acute and late skin toxicity were also not statistically different between the two arms (13).

Our series of patients had similar high response rates (87% CR and PR) after radiation as compared to the published literature. In addition to the existing literature, we were able to report on a subset of patients treated with repeat radiotherapy for KS skin lesions which failed initial radiotherapy. In this subgroup, none of the patient had CR, half showed PR and half showed continued progression.

The limitations of this study include the retrospective nature of the analysis, the lack of validated quality of life and symptom control outcomes. In addition various radiotherapy dose fractionation schedules were used.

Ethical Statement: The study was approved by institutional ethics board of Sunnybrook Health Sciences Centre (REB project identification number 464-2014) and written informed consent was obtained from all patients.