Palliative care for a patient with Lambert-Eaton myasthenic syndrome: role of 3,4-diaminopyridine

Lambert-Eaton myasthenic syndrome (LEMS) is an uncommon autoimmune idiopathic or paraneoplastic syndrome producing antibodies against voltage presynaptic calcium channels. The clinical features of patients with LEMS are easily fatigability, muscle weakness and autonomic dysfunction (1). Approximately sixty percent in cases LEMS is associated with malignancy, usually a small cell carcinoma (SCC) of lung (2). The cancer can be detected years after the onset of symptoms, so once LEMS diagnosis is established, the search for occult malignancy should be performed periodically. According to previous studies, many patients with LEMS experience remission in both the clinical symptoms of muscle weakness (3,4) and the electrophysiologic abnormalities (5) after successful treatment of lung SCC. However, some of patients might not respond to conventional therapy and eventually require palliative care (PC) service.

Hereby, we reported a LEMS patient was referred for PC service because of progressive disease and 3,4-diaminopyridine (3,4-DAP) had important roles in this case.

This 56 years old male gentleman was admitted because of bilateral lower limb weakness with difficulty in walking in October 2013. He had diminished jerks associated with down-going planters. There was neither extraocular involvement nor autonomic dysfunction.

The Nerve Conduction Studies (NCS) at that time showed preserved sensory and motor conduction velocities in the upper and lower limbs. Compound Muscle Action Potentials (CMAPs) in the upper limbs were attenuated to around 1.8 to 2.7 mV on both sides. CMAPs in the lower limbs ranged from 1.6 mV in the right tibial nerve to 3.3 mV in the left peroneal nerve. Repetitive Nerve Stimulation (RNS) carried out at the right trapezius at rest and at 2 min post exercise showed persistent decremental response; there was no post-exercise exhaustion; RNS at 50 Hz performed at the hypothenar muscles on stimulation of the ulnar nerve showed incremental response of 50%. Overall findings are suggestive of a pre-synaptic neuromuscular junction disorder (Figure 1). 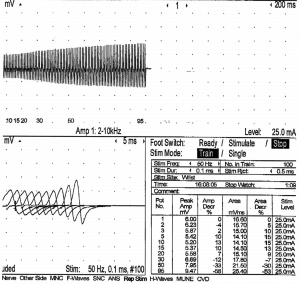 He was diagnosed to have LEMS associated with SCC of lung. 3,4-DAP was then prescribed by neurology team and he showed substantial improvement of his muscle power. Regarding oncology treatment for his limited stage lung SCC, it was treated with chemo-radiotherapy and prophylactic whole brain radiotherapy. He was given etoposide for 3 months initially and then switched to irinotecan/carboplatin because of poor response. However, follow-up computerized tomography (CT) showed presence of significant brain metastasis (Figure 2). The left high frontal and cerebellar brain metastasis were treated by X-knife in November 2014. Craniotomy for excision of brain tumour (supratentorial, left frontal) was performed in March 2015. Although conventional treatments had been given, repeated CT brain showed interval increase in size of tumor size. In view of progressive disease, he was referred to PC team for symptom control, psycho-social care and end of life care. 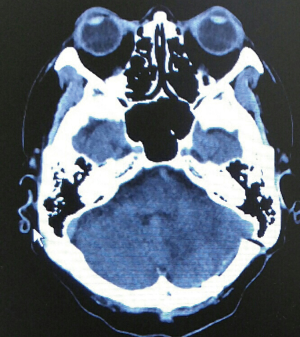 During initial assessment by PC team, he complained of vertigo, vomiting and limb weakness. The vertigo and vomiting was treated with prochlorperazine. Dexamethasone was given for his brain metastasis.

Because his power could be maintained by 3,4-DAP and dexamethasone, he continued limb physiotherapy in hospital. At that time, he was happy, satisfied, and wished to go home even in debilitated stage. He had joined our volunteer activities including hair cut service, peer support life book review and watching opera. These were important psycho-spiritual care to this patient (6). In addition, his family members were supported by PC team nurse and social workers (7). After a month of stay in our unit, his condition worsened due to neurological deterioration and finally passed away peacefully in our ward.

This case report highlighted the use 3,4-DAP in a palliative care patient with LEMS. According to previous literature, LMS patients associated with underlying malignancy usually have poor prognosis and most patients will die within 1 year (8). In this regard, the goal of care is to maximize patient’s quality of life, symptom control and provide psycho-social care. In addition, spiritual support with providing patient hope and dignity is vital in delivering palliative care service (9).

As we might expect, this patient had grave prognosis after conventional therapy failed. While dexamethasone and radiotherapy might control the disease, the proximal muscle weakness and its associated symptom should be treated by giving 3,4-DAP (8).

3,4-DAP increases the release of acetylcholine into the neuromuscular synapse. Previous randomized placebo-controlled studies consistently showed that use of 3,4-DAP in LEMS could cause significant improvement in both muscle strength and CMAP amplitudes. The plasma half-life of 3,4-DAP is short (30 min to 2 h), but the neuromuscular effects are slightly prolonged, supporting a 3–4 times daily dosing regimen. The side effects of 3,4-DAP are generally mild and most frequently consist of perioral or acral paresthesias. The maximum daily dose of 3,4-DAP should not exceed 100 mg, as higher doses can induce epileptic seizures and possibly arrhythmias (Table 1).

Thus, it seems to be safe when using 3,4-DAP in terminal ill patients although frequent monitoring its adverse reaction is required. Based on recent expert review, it should be offered to those LEMS patients for symptomatic treatment (8). In this context, 3,4-ADP should be regarded a symptomatic treatment for this group of patients even if they were receiving palliative care .

It is encouraging to see that this patient was benefited from PC service for several important aspects including his symptoms improved, emotional stable, muscle power maintained and hope restilled as he wished to go home. In this case, use of 3,4-DAP had palliative roles, just like chemotherapy and radiotherapy, for patients with terminal malignancy (10). Apart from symptomatic treatment, it also helps maintain patient’s mobility and quality of life. More importantly, it gives ‘hope’ for the patient as to have short-term goals, e.g., home leave or discharge. Maintaining ‘hope’ for terminal patients is crucial to provide spiritual support for end of life care (9).

In conclusion, this case showed that 3,4-DAP had palliative roles for a terminal ill patient. It helps relieving symptoms related to LMS, improving his quality of life and also gives ‘hope’ to this patient. Because of limited survival for this group of patients, the cost might not be an important factor for prescribing this medication. However, this drug is still unregistered in many countries.

Informed Consent: Written informed consent was obtained from the patient for publication of this case report and any accompanying images.