Pulmonary LCNEC was first described by Travis et al. (1), is a rare but highly aggressive tumor type, accounting for approximately 1% of all lung cancers. Patients with LCNEC are predominantly male (2), older, and heavy smokers. The median age is ≈60 years; this disease is uncommon in non-smoking females. LCNEC is poorly symptomatic; cough, hemoptysis, and post-obstructive pneumonia are infrequent. Sometimes, patients present with asymptomatic nodules, chest pain, nonspecific flu-like symptoms, dyspnea, night sweats, or carcinoid syndrome. LCNEC is categorized as a high-grade neuroendocrine tumor, in the same category as small cell lung cancer (SCLC). In the 1970s, pulmonary neuroendocrine tumors were classified into three histologically defined categories: typical carcinoids (TC); atypical carcinoids (AC), usually defined as carcinoids; and the more undifferentiated entity represented by SCLC. Then, in 1999 and 2004, the World Health Organization recognized LCNEC as a variant of large cell carcinoma (LCC), which is a type of non-small cell lung cancer (NSCLC) and one of the four major types of lung neuroendocrine tumors; LCNEC is the only type of NSCLC that requires immunohistochemical (IHC) staining for at least one positive neuroendocrine marker such as chromogranin A, synaptophysin or CD56 to confirm definite diagnosis (3). In most cases, LCNEC develops peripherally and is rare in the central part of the lung, causing concomitant atelectasis; metastasis often occurs in the liver, bone, brain, adrenal gland, lung, pleura and extra-thoracic lymph nodes (4). Here, we report a case of Pulmonary LCNEC. We present the following case in accordance with the CARE reporting checklist (available at http://dx.doi.org/10.21037/apm-20-1667).

A 64-year-old male smoker was treated for one month for blood in his sputum; he had a clear history of asbestos or silica dust exposure. He had a substantial smoking history of approximately ten cigarettes per day for 30 years. There was no history and family history. Chest radiography and computed tomography (CT) revealed a 3-cm solitary tumor in the left upper lung (Figure 1). Malignancy was considered clinically. Contrast-enhanced brain magnetic resonance imaging revealed no metastatic foci in the brain. We observed no bone metastasis or other distant metastases. One week after hospitalization, the patient was treated with thoracoscopic radical surgery for upper left lung cancer. Postoperative pathology shows pulmonary LCNEC, the mass is 3 cm × 3 cm × 2.5 cm, group 11 lymph node see 1 metastasis. TNM is T2N1M0, stage IIB. The tumor cells show moderately abundant cytoplasm, pleomorphic and vesicular nuclei, and mitosis (up to 20 mitoses/2 mm2). Immunohistochemical analysis showed that the tumor cells were diffusely and strongly positive for Ki-67, EMA, and neuroendocrine markers (synaptophysin, and CD56) (Figure 2) and negative for thyroid transcription factor-1, chromogranin, Napsin A, CK5/6, and CD20. We performed postoperative chemotherapy with a double-drug regimen holding platinum. The patient received one course of postoperative adjuvant chemotherapy (etoposide, 100 mg/m2/day, day 1–3; carboplatin AUC 5–6, day 1). The patient developed hoarseness after chemotherapy and found no abnormalities during laryngoscopy. CT’s examination of the chest revealed multiple enlarged lymph nodes near the left pulmonary hilum and aortic arch, metastasis was considered, and we observed left pleural effusion. Fluorodeoxyglucose positron emission tomography (FDG-PET) showed: metastatic pleural tumor with left pleural effusion; left residual lung nodule shadow; multiple lymph node metastases in the mediastinum and hilum of the left lung; right adrenal metastasis, without excluding left adrenal metastasis; and systemic bone metastasis. The enlarged lymph nodes in the right iliac fossa and the left paracolic sulcus are suspected to be metastatic. Genetic testing of the surgical specimens suggested PD-L1 staining of 10%. Low-level microsatellite instability was noted, and the tumor mutation load was 36.29. Epidermal growth factor receptor (EGFR), ALK, KRAS (−), TP53 pathogenic mutations were not observed. Subsequently, two cycles of a chemotherapy regimen holding paclitaxel 300 mg d1, cisplatin 40 mg d1–3, and bevacizumab 500 mg d1 anti-vascular chemotherapy was administered. During chemotherapy, the patient experienced lip numbness. Contrast-enhanced brain magnetic resonance imaging revealed left parietal lobe metastases in the brain. Three months after surgery, we performed radiotherapy for metastatic brain tumors (45 Gy; 15 fractions). A reexamination of the images suggested the rapid progression of the metastatic tumors in the lungs and spine. Four months after the operation, therapy with the PD-L1 checkpoint inhibitor nivolumab (200 mg d1 q21) was started. Despite immunotherapy, the tumors in the lungs and bone and the other distant metastases progressed rapidly. The patient chose to stop treatment five months after surgery. Immunotherapy is an ineffective treatment possibility for these patients, even if PD-L1 expression is positive. 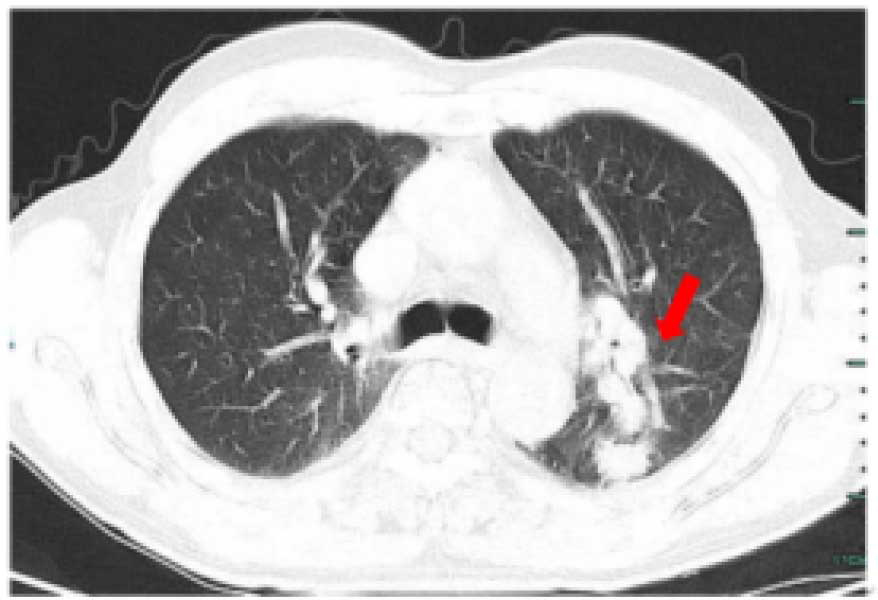 Figure 1 Chest radiography and computed tomography revealed a 3-cm solitary tumor in the left upper lung, the lesion is identified with red arrow.

Figure 2 (A,B,C) 200× magnification. (A) The tumor cells appear large and pleomorphic with abundant cytoplasm, vesicular nuclei and large nucleoli with hematoxylin and eosin (HE) staining; (B) immunohistochemical analysis showed diffuse positive syn staining in the cytoplasm; (C) necrosis can be observed in the mitotic divisions under hematoxylin and eosin (HE) staining, up to 102/mm2.

Our patient progressed rapidly after treatment, motivating us to review the advancements in the treatment of LCNEC. Series of surgically resected stage I–III lung cancer have shown that LCNEC and SCLC have similar prognoses. Patients with potentially resectable stage I small cell neuroendocrine carcinoma or LCNEC have 5-year survival rates ranging from 27% to 59%, there is difference in the stage IV (5). Therefore, we review the progress of the treatment of advanced lung large cell neuroendocrine carcinoma (LCNEC). In the current European Society for Medical Oncology guidelines for NSCLC, no specific treatment for LCNEC is described (6). In the American Society of Clinical Oncology (ASCO) guidelines, either platinum/etoposide chemotherapy or the same regimen for NSCLC is recommended for LCNEC, example as cisplatin combined with pemetrexed (7). The optimal adjuvant and advanced chemotherapy regimen is still an existing controversy (8). Forty-nine patients with stage IV LCNEC were identified, and 37 patients had available data regarding treatment for first-line metastatic disease: 70% (n=26) received platinum/etoposide, and 30% (n=11) received other regimens (9). Two-phase II trials, both with pathological reviews, have been reported. A European trial (10) reported a median OS of 8.0 months (95% CI: 3.7–7.9 months), progression-free survival (PFS) of 5.0 months (95% CI: 4.0–7.9 months) and response rate (ORR) of 34% in 29 patients treated with platinum/etoposide chemotherapy. In a Japanese trial (11), a median OS of 12.6 (95% CI: 9.3–16.0) months, PFS of 5.8 (95% CI: 3.8–7.8) months, and ORR of 47% were reported after treatment with platinum/irinotecan (n=30). Considering these results, the response of LCNEC to platinum-based chemotherapy may be comparable to SCLC and better than NSCLC.

However, in a prospective, multicenter phase II trial, chemotherapy-naive patients with stage IV LCNEC received 5mg everolimus daily combined with paclitaxel 175 mg/m2 and carboplatin AUC 5 every three weeks for a maximum of four cycles followed by maintenance everolimus 5mg daily until progression. The ORR was 45%, the disease control rate was 74%, the median PFS was 4.4 months, and the median OS was 9.9 months. The PFS rate at three months (primary endpoint) was 76%, according to a Kaplan-Meier analysis (12). In another study, they categorized first-line chemotherapy into three groups, (I) group I, which comprised gemcitabine, docetaxel, paclitaxel, or vinorelbine; (II) group II, with pemetrexed treatment only; and (III) group III, which comprised etoposide chemotherapy. The median (95% CI) OS after the group I chemotherapy was 8.5 months, which is significantly longer than that for patients treated with group II chemotherapy, who had a median survival of 5.9 months, and for patients treated with group III chemotherapy, who had a median survival of 6.7 months. In patients with LCNEC, the group I chemotherapy resulted in a longer OS than group II and group III chemotherapy (13). Therefore, new, more extensive prospective trials should be encouraged to confirm gemcitabine, docetaxel, paclitaxel, or vinorelbine or etoposide chemotherapy approaches for both diagnosed and suspected pulmonary LCNEC.

No defined biomarker of response to chemotherapy has been found. Patients with LCNEC tumors that carry a wild-type RB1 gene or express the RB1 protein respond better to platinum plus gemcitabine or taxanes (NSCLC-GEM/TAX) treatment than to platinum plus etoposide (SCLC-PE) chemotherapy (14). The few limitations of these studies, including their retrospective design, encourage the replication of these results in a prospective randomized clinical trial that stratifies LCNEC from genomic subtypes.

In the current research, the mutational landscape revealed that TP53, RB1, NF1, SMARCA4, EGFR, ALK, KEAP1, and NOTCH1 were the most frequently mutated genes in the cfDNA of this LCNEC patient (15-17). However, the frequency of EGFR mutations in LCNEC patients is low; in one study, genetic alterations were detected in 12 (15%) tumors, with an EGFR mutation rate of 1% (18). The first report of LCNEC carrying an EGFR activating mutation and of gefitinib activity in LCNEC patients was published in July 2010; a 66-year-old woman who had never smoked was diagnosed with metastatic LCNEC. An activating EGFR mutation (exon 19, p. L747_A755>AT) was detected in the extracted DNA, and a correlation between exon 19 deletion and LCNEC response to gefitinib was reported (19). Another case harboring an EGFR mutation showed a response to an EGFR-tyrosine kinase inhibitor (EGFR-TKI). Specifically, a neuroendocrine carcinoma (LCNEC) harboring an EGFR gene mutation responded for eight months to the EGFR-TKI icotinib (20). Zheng found that LCNEC responded to ALK inhibitor (crizotinib) treatment for ten months (21).

PD-L1 expression was found in 10.4–40% of LCNEC cases. The high frequency of PD-L1 expression could support using the anti-programmed cell death 1 antibody in the treatment of LCNEC (22). A paper reported that second-line systemic therapy with nivolumab (3 mg/kg every two weeks) was started for a tumor pathologically staged according to the TNM classification (eighth edition) as ypT0 ypN0 (R0). Nivolumab was not continued after surgery, and no other adjuvant treatment was planned. The patient was still in complete remission and free of treatment eight months after surgical resection (23). This case revealed a complete response to nivolumab after palliative thoracic radiotherapy in this rare subset of lung cancer that has previously been characterized by a poor prognosis. However, in our case, we did not observe the same efficacy. Immunotherapy is an ineffective treatment possibility for these patients, even if PD-L1 expression is positive. A possible contributing factor is the timing of immunotherapy too late, which is also this case’s limitation. The efficacy of immune checkpoint inhibitors in LCNEC has not yet been thoroughly evaluated, and more research is still required to discover a breakthrough in terms of survival.

Reporting Checklist: The authors have completed the CARE reporting checklist. Available at http://dx.doi.org/10.21037/apm-20-1667

Conflicts of Interest: All authors have completed the ICMJE uniform disclosure form (available at http://dx.doi.org/10.21037/apm-20-1667). The authors have no conflicts of interest to declare.