With the speed up pace of work and life in modern society and fierce competition in the workplace, the human body and mind are under long-term tension. As psychological pressure increases, the incidence rate of chronic fatigue syndrome (CFS) is on the rise (1). CFS is characterized by debilitating fatigue that is not relieved with rest and is associated with physical symptoms. It is a clinical diagnosis that can be made only when other disease processes are excluded. The onset and progression of CFS involve various factors, which result from neuroendocrine and immune system dysfunctions caused by viral infection and stress, especially being closely related to cellular immunity (2).

Ginseng is a traditional Chinese medicine that can replenish Qi and reinforce vital energy. The spleen is the foundation of the acquired constitution and the source generating Qi and blood. Ginsenosides are the main active ingredients of ginseng. Ginsenoside Rg1 is involved in many pathophysiological process including cardiomyocyte apoptosis, diabetes, Parkinson’s disease, etc. Particularly, ginsenoside Rg1 can resist fatigue, enhance immunity, and regulate cellular immune functions (3).

However, acupuncture can stimulate the meridians, regulate internal organs, strengthen the body resistance, remove pathogenic factors, and modulate Yin and Yang (4). It is a valid green therapy for treating CFS, which, if combined with drugs, can function synergistically. The Beishu acupoint, as one of Beishu acupoints on the bladder meridian, is the place where the spleen Qi is transferred and infused. Stimulating the Beishu acupoint can control the spleen Yang, replenish the spleen Qi, and exert positive effects on vital organs.

With the close relationship between the spleen and limb muscles and thoughts, this study proposed a method of replenishing Qi, strengthening the spleen, and combating fatigue. Different from other studies, with the intravenous injection of ginsenoside Rg1 and acupuncture of the Beishu acupoint, we assessed the influence on the cellular immune functions of a CFS rat model and explored the probable mechanisms. We present the following article in accordance with the ARRIVE reporting checklist (available at http://dx.doi.org/10.21037/apm-20-1714).

Forty SPF male Wistar rats aged 2–3 months old and weighing (280±20) g were bought from Beijing Hua Fukang Biotechnology Co., Ltd. [China; license number: SCXK (Beijing) 20089-0004]. Experiments were performed under a project license granted by committee of ethics of Clinical Medical College of Acupuncture and Rehabilitation of Guangzhou University of Chinese Medicine, in compliance with institutional guidelines for the care and use of animals.

Establishment of the CFS model

The rats were weighed after adaptive feeding for one week, and modeling was performed using forced cold-water swimming combined with chronic restraint (5). Swimming was started at 8:00 every morning in a plastic bucket, which was about 90 cm high and 60 cm in diameter, with the water depth of about 40–45 cm and temperature of (15±2) °C. Forced swimming began from the time when the rat entered the water, and ended until the coordinated movement disappeared, water flooded the nose tip, and the body sank and emerged from the water again after over 10 seconds. During swimming, the rats were prevented from self-rescuing or sinking into the water because of fatigue. The rats were then moved out from the water, wiped with a cloth, dried with an air cylinder, and placed in the cage. At 3 pm daily, the rats were placed in a self-constructed constraint tube and returned to the cage after 1 hour. The modeling period was 21 days.

No intervention was given to the blank control group. Acupuncture group: On the 2nd day after modeling, the Beishu acupoint was acupunctured with a Japanese “kb” short needle (0.12 mm × 7 mm). The needle was inserted straight to the depth of 4–5 mm. Afterward, the needle shank was connected with an electroacupuncture apparatus to produce a dilatational wave with a voltage of 4.5 V and a frequency of 4/20 Hz. The intensity was suitable when there was trembling of local skin muscle. The needle was used for 20 minutes, once a day, for seven days.

The rat tail end was hung upside down on a plate 1 meter above the ground, and the number of struggles (overturned by hanging upside down) and resting time within 5 minutes were recorded.

The rats were placed in a swimming pool with a water depth of 50 cm at (25.0±1.0) °C, and the exhaustion swimming time was from entering the water to the head being unable to emerge from the water after 10 seconds.

The rats were anesthetized with 10% chloral hydrate at 3 mL/kg and laid supinely on an operating table with the head and limbs fixed. Under anesthesia, the skin and muscles in the middle of the abdomen were opened to expose the abdominal cavity. Abdominal aortic puncture collected whole blood placed still at room temperature for 1 hour, and centrifuged at 2,000 rpm for 10 minutes to take the supernatant, which was stored in a −80 °C refrigerator before use.

ELISA determined the levels of IgA, IgG, IgM, IFN-α, IFN-β, and IFN-γ in rat serum. According to the kits’ instructions, the standard was diluted at multiple proportions, added samples, and reacted at 37 °C for 30 minutes. After the plate was washed five times, the samples were reacted with conjugate reagent at 37 °C for 30 minutes and added developing solutions A and B for color development at 37 °C for 10 minutes after another five washes, followed by addition of a stopping buffer. The optical density (OD) was read within 15 minutes. The linear regression equation of the standard curve was calculated according to the concentration of standard and corresponding OD, with which the sample concentration was obtained.

A drop of tail blood with the size of a grain of rice was taken from each rat 1 hour after the last administration and acupuncture and placed on one end of a slide. The other slide with smooth edges was used as a pusher, placed in front of the blood drop at an angle of 30–35°, pulled backward slightly, and moved towards the left and right to cause the blood drop in a line. The pusher was pushed smoothly from one end to the other, sticking to the edge. The force must be even until no blood was left (the angle of the pusher controlled the blood thickness) to push the blood drop into a sheet. After natural drying, the specimen was stained with Giemsa-Wright solution for 3–7 minutes, rinsed with normal saline, dried with filter paper, and examined by microscopy. The transformed cells among 200 lymphocytes were counted under the microscope to calculate the lymphocyte transformation rate.

After the blood of the abdominal aorta was taken, the spleen was removed after cutting open the abdominal cavity. The spleen was washed with 5 mL of Hank’s solution three times. The spleen cell suspension was collected in a tube. Lysate removed erythrocytes and then washed three times by phosphate-buffered saline (PBS). After the last centrifugation, the supernatant was discarded, and 1 mL of PBS was added to re-suspend the cells. Then the cells were counted, and the concentration was adjusted to 1×105/mL. Subsequently, 500 µL of spleen cell suspension was taken, mixed with 5 µL of anti-CD3-APC, anti-CD4-FITC and anti-CD8a-PE antibodies in the dark at room temperature for 20 minutes, centrifuged (300 ×g, 5 minutes) to discard the supernatant, added 500 µL of PBS, mixed, washed twice, centrifuged (300 ×g, 5 minutes) to discard the supernatant, re-suspended with 500 µL of PBS for re-suspension, and finally examined by flow check fluorospheres (Beckman Coulter, USA).

The rats were anesthetized with 10% chloral hydrate at 3 mL/kg and laid supinely on an operating table with the head and limbs fixed. Under anesthesia, a piece of the gastrocnemius (about 5–6 g) in the same part of the left rear limb was collected, washed with 4 °C normal saline, dried with filter paper, immediately placed in a clean cryotube, and stored at −80 °C before using. ELISA kits detected the activities of MDA, T-AOC, and AChe.

All data were analyzed by SPSS16.0 and expressed as (x ± standard). Intergroup comparisons are performed by one-way analysis of variance. P<0.05 was considered statistically significant. 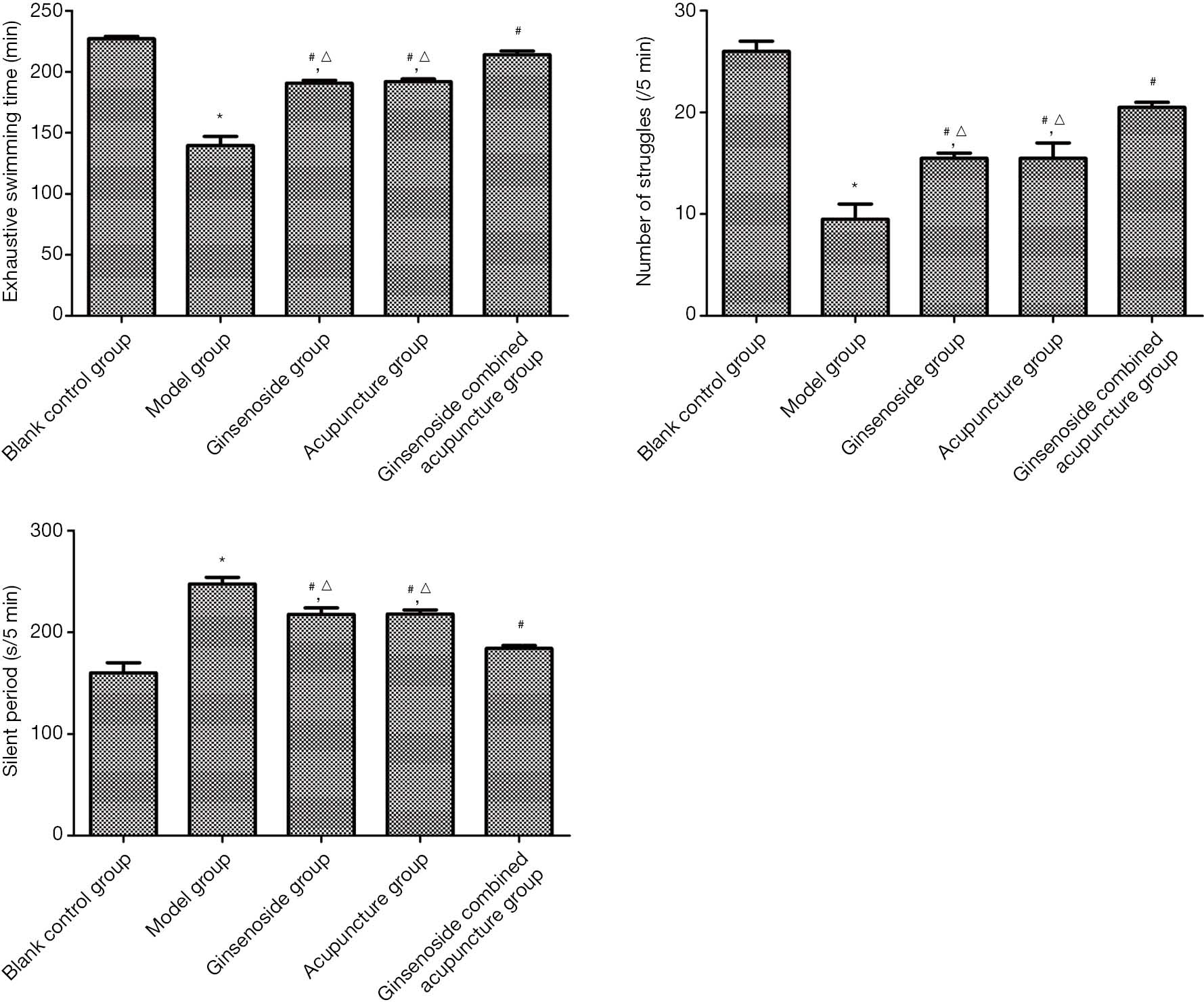 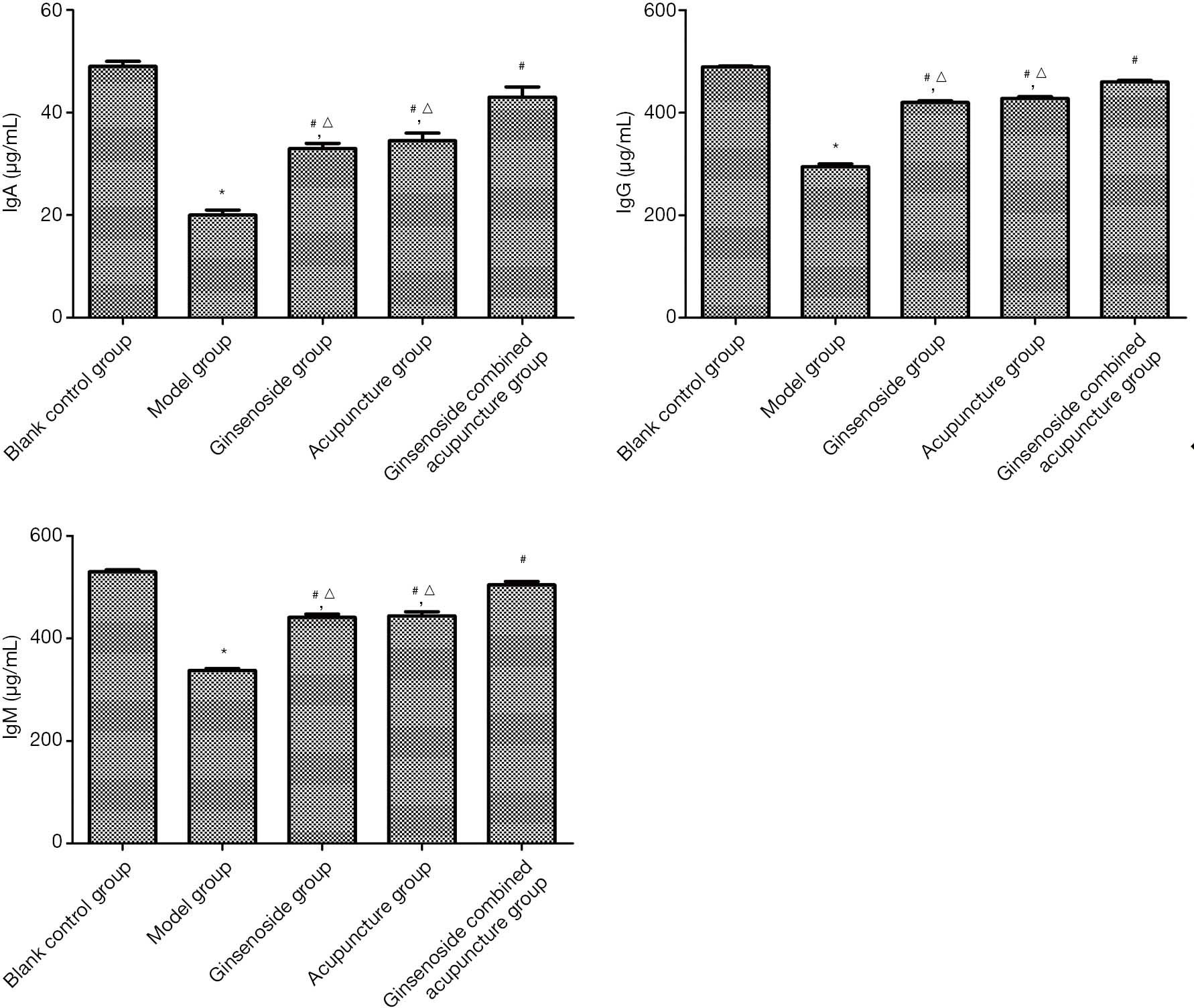 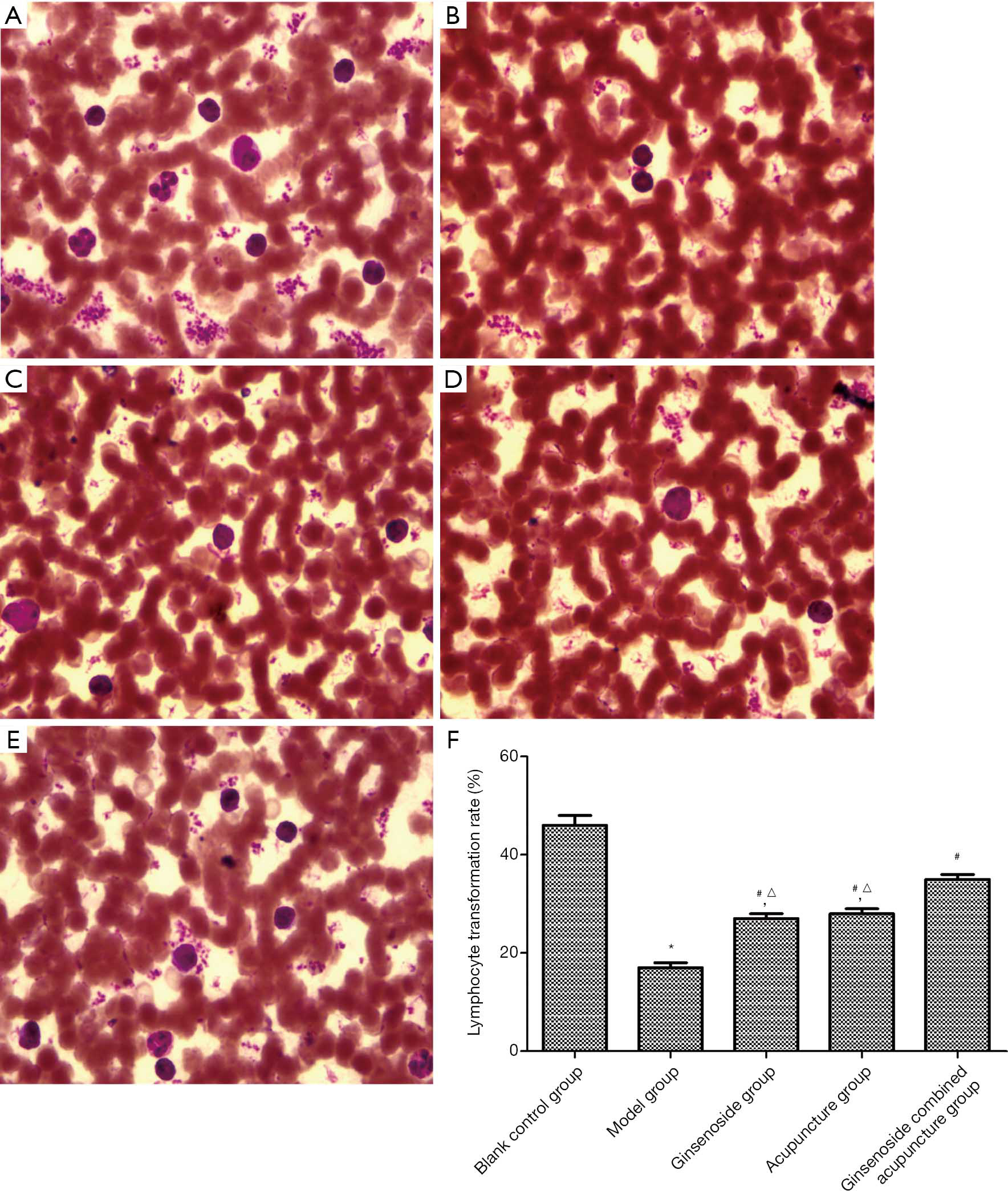 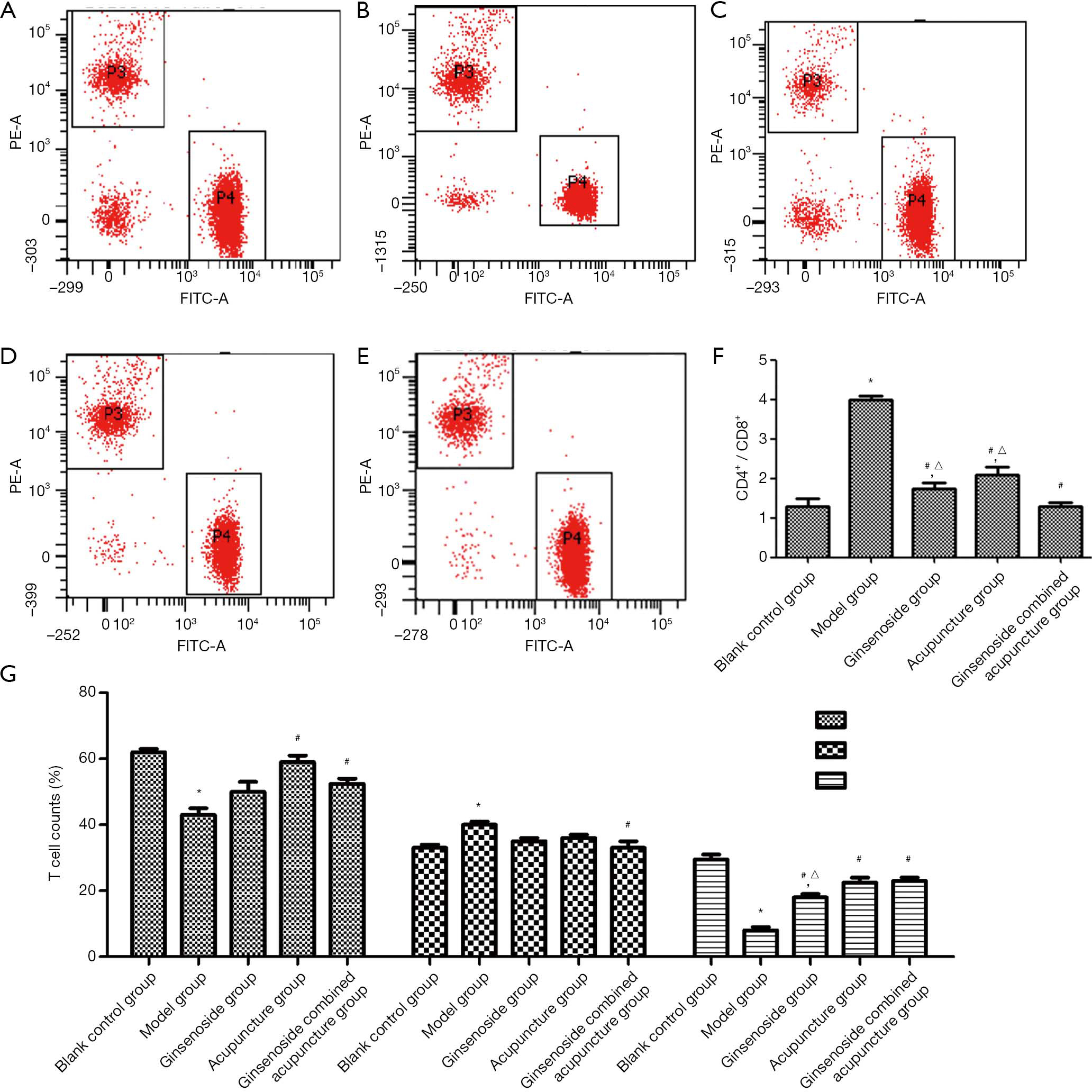 Levels of MDA, T-AOC, and AChe in skeletal muscle 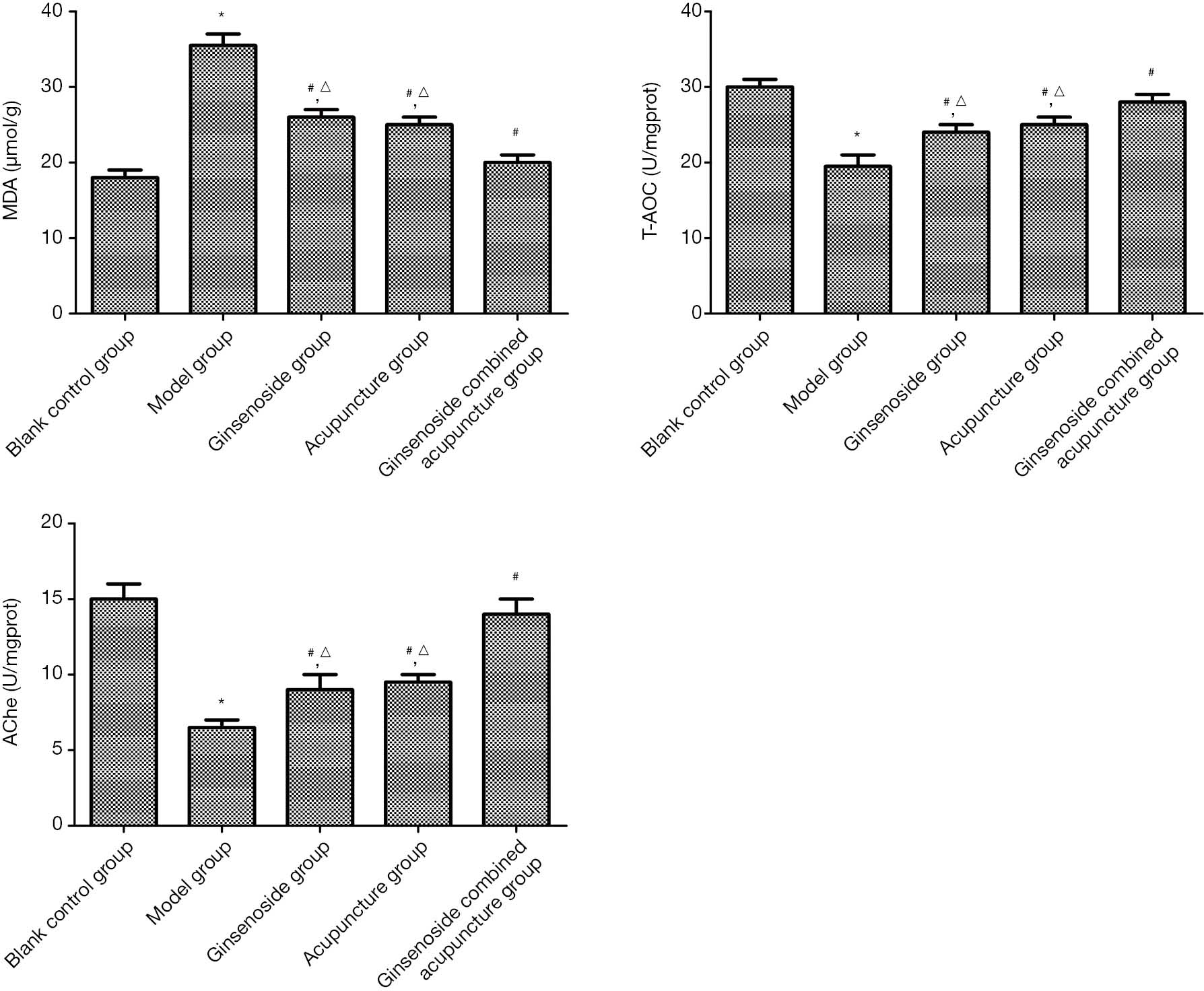 Extreme physical fatigue mainly characterizes CFS and mental fatigue, mainly characterized by low fever, muscle soreness, fatigue, immunological abnormalities, which is an unhealthy state of the human body (2). With the rapid development of society, the incidence and prevalence rates of CFS have shown a significant upward trend. At present, CFS is treated primarily by vitamin and nutrient supplementation, with unsatisfactory outcomes. Therefore, finding an effective therapy has attracted widespread attention.

The pathogenesis of CFS is still unclear. Immune system dysfunction plays a crucial role in the progression of CFS (12,13), including abnormal levels of immunoglobulins, unbalanced levels of antiviral antibodies. Chronic immune activation leads to increased or decreased cytokine release and thus disrupts the neuro-endocrine-immune system, leading to CFS symptoms. IgA, IgG, and IgM are cell activity factors produced by B cells, which mediate non-specific immune responses. Higher levels of them mean better immune functions (14). IFNs are cytokines with antiviral, antitumor, and immunomodulatory effects (15,16). In this study, after treatment, the serum IgA, IgG, IgM, IFN-β, and IFN-γ levels of ginsenoside, acupuncture, and combination groups significantly exceeded those of the model group, and the IFN-α level was significantly lower. Both ginsenoside and acupuncture relieved fatigue symptoms and exerted synergistic effects.

Accumulating evidence has confirmed that regulating lymphocytes is one of the crucial mechanisms by which acupuncture treats various diseases (19). Acupuncture not only elevates the ratios of lymphocytes and their subsets in peripheral blood, but also enhances their activities. From the results in this study, stimulating the Beishu acupoint helped the cellular immune function of CFS rats by regulating the proportion of T cell subsets.

In summary, stimulation of the Beishu acupoint and intravenous injection of ginsenoside Rg1 can regulate T cell subsets in CFS rats and enhance cellular immune function. Notably, their combination has synergistic effects. Acupuncture helps the human body to absorb drugs in the greatest state and to promote further distribution.

Reporting Checklist: The authors have completed the ARRIVE reporting checklist. Available at http://dx.doi.org/10.21037/apm-20-1714

Conflicts of Interest: All authors have completed the ICMJE uniform disclosure form (available at http://dx.doi.org/10.21037/apm-20-1714). The authors have no conflicts of interest to declare.

Ethical Statement: The authors are accountable for all aspects of the work in ensuring that questions related to the accuracy or integrity of any part of the work are appropriately investigated and resolved. Experiments were performed under a project license granted by committee of ethics of Clinical Medical College of Acupuncture and Rehabilitation of Guangzhou University of Chinese Medicine, in compliance with institutional guidelines for the care and use of animals.